Day 12 - Triabunna to Bicheno. I get a talking-to from the Police and we find a real Penguin!

Monday 16 February.  As you may recall, the bar closed at 7 pm yesterday evening. Despite the fact that the Tandar is a motel, it turns out they don't do breakfast either. So we returned en masse to the eat-in takeaway, which suited most, although as they only did a cooked breakfast I wasn't too keen. Then I made the mistake of ordering sausage and ended up being the last one to be served for the second time in under 24 hours.

I set off (last) with Tony and Deborah, the day looking promising with a broken sky and following breeze. Once again I stopped several times to look at birds (Eastern Rosella, Scarlet Robin, Noisy Miner, Kookaburra) and then, after 16 miles, I got a front puncture. I don't get punctures very often but it was just after I'd stood up out of the saddle to give my bum a rest, and the front wheel had dropped off the edge of the tarmac. Whether that caused the flat, or whether a flat caused the wobble, I'm not sure.


By the time I'd changed the inner tube (it only took five or ten minutes) I must have been well behind everyone, but I reckoned I'd catch up in Swansea (which came after the junction to Pontypool). Thinking Richard might be worried, I sent him a text, which he read after I'd told him about it! 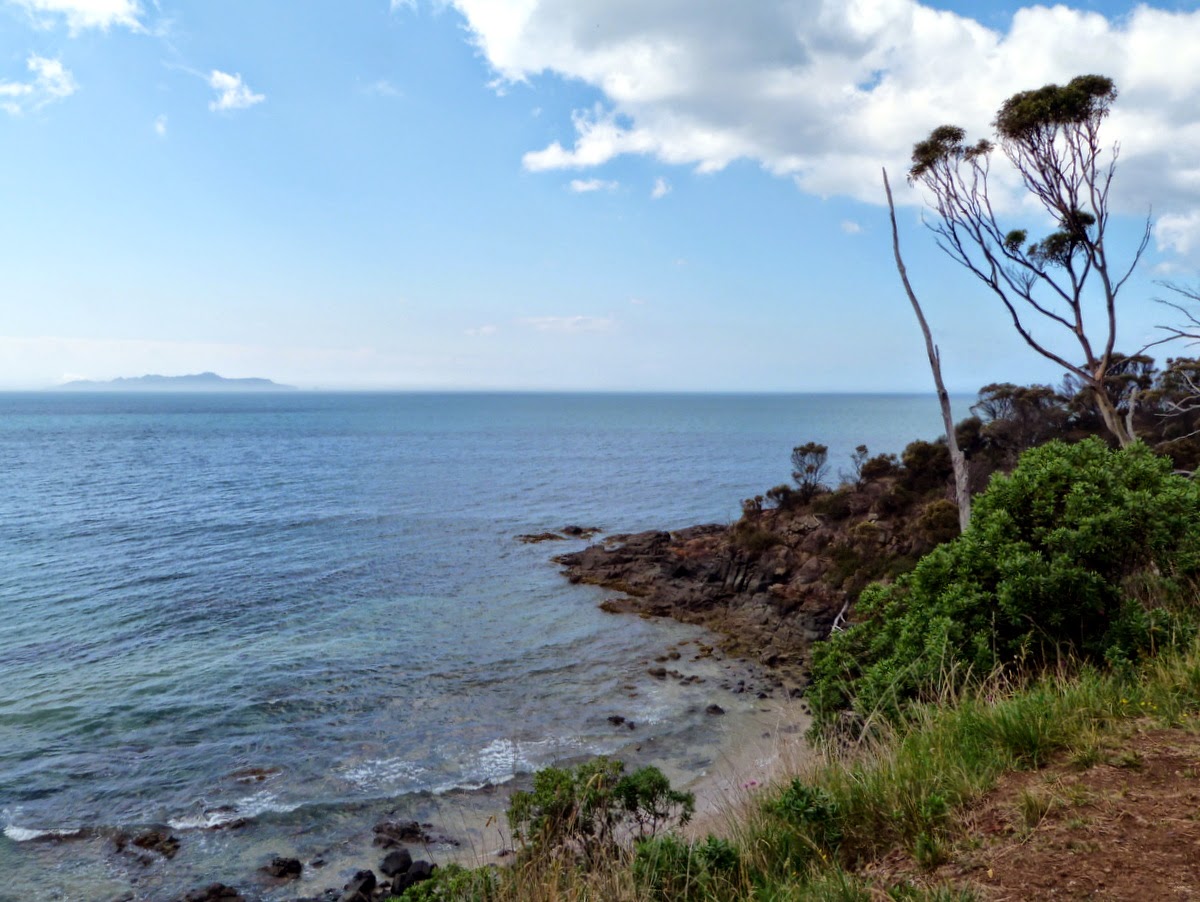 The road now ran close to the sea and was very scenic, then led to Swansea, where everyone had found a decent cafe for a spot of lunch. A flat white, a banana and a citrus tart later and I was off again, along with John, Valerie and Ken. The weather was warm and sunny with a gentle tailwind. A Swamp Harrier attracted my attention, as did a freshly road-killed possum.

Another of Richard's minor detours took us on to a side road which crossed a medium sized stream on a concrete bridge which was only a few inches above water level. It occurred to me that if it had rained much more two days ago we'd be turning back to the main road at this point! I stopped under a tree to renew my suncream as it was really sunny (and also to have a delicious cherry-coconut-chocolate bar, then, back on the main road, the road kicked uphill for a long climb.

At one point a stream ran close to the road on the left and I heard a loud splash as I got near, but didn't get to see what had caused it, sadly. Over the top there was a great viewpoint on the descent overlooking Oyster Bay and some vineyards. I spoke to a young man who'd just arrived in Tassie on the overnight plane from Perth, and was on his way to do a wilderness walk in the Freycinet National Park.

Soon afterwards I was overtaken by a Police car which stopped just in front of me. The Officer got out and waved me to stop, then in a friendly kind of way told me that drivers had 'complained' that there were two groups of cyclists on the road and that they had 'come across them just around bends'. I resisted the urge to suggest that as we weren't doing anything wrong, complaints was a bit of a strong word: he seemed friendly enough and he just asked me to ensure that everyone in our group was cycling safely (which I knew they would be anyway) and we parted on very friendly terms. But I couldn't help wondering what kind of driver would actually report to police the fact that there are cyclists on the road. Blimey, there'll be walkers on footpaths next!

I've just remembered - the biggest irony was that there are signs on that stretch of road warning motorists to 'Expect the Unexpected' around the next bend!

Soon after was the best ice-cream stop ever - the Pondering Frog - in just the right place and with the most unbelievably delicious ice-cream. Some of the Canadian cycling group were there so I told them that the Police had told me that they were the troublemakers!

The last few miles to Bicheno were into quite a headwind, which slowed things around. At the Wintersun Motel we found that four of us had to share one room, which was a bit tight. Richard got the camp bed, and drying clothes would have been a problem had it not been for (a) the dry weather and (b) a rotary clothes line in the garden.

After an evening meal at the Sea Life Centre restaurant we walked back in the gloaming along the rocky beach (great big slabs of granite, getting trickier to negotiate as it got darker) and then found ourselves at a Penguin nesting site. These are Little Penguins: you could hear the chicks in the burrows at the top of the beach (and under the edges of the nearby car park) calling for their parents to hurry up and feed them. But mum and dad were, in most cases, reluctant to come ashore until it was later and darker. We waited, seeing nothing for a while, then as we decided to leave, Tony and Deborah found an adult bird hiding in some bushes right next to the path - so we got to see a real Little Penguin at last.