Day 10 - The Final Push before a short break

Today was the day for me and the van to part company.  Alan, anxious to ensure that his wedding suit would fit, for son Chris’s nuptuals, needed to get back to Lancashire today, and the only way was to drive back with Val and the motorhome.  This left me stranded and needing to reach Oban by the end of the day in order to catch a train tomorrow (Friday), as I’m invited to the wedding too.
My feeling of isolation was inadvertently increased by the fact that for some reason I hadn’t uploaded the route properly on to the bike SatNav: luckily, I know the way to Oban so it wasn’t a problem. 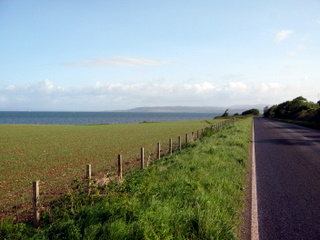 The day was full of promise – sunny skies, tailwind, a good forecast – yet as I completed the Kintyre loop by rejoining the road of two days ago, black clouds moved in and I got another soaking – and a cold one at that.  From Tarbert I carried on along the shores of Loch Fyne (with the sea on my right now!) and was caught by another cyclist who was doing Land’s End to John O’Groats.  Another lightweight traveller, he was being ‘shadowed’ by his wife in the car, and staying at B&Bs and Youth Hostels. 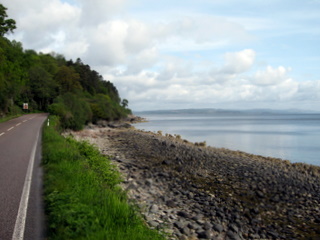 At Lochgilphead we parted company as I went into town to refuel at a fairly rough and ready café.  Lochgilphead wasn’t quite what I expected and a bit disappointing: it seemed odd that everyone has a Glasgow accent compared to the soft Highland lilt of Oban, only 35 miles further north.

Past Kilmartin (church, museum and antiquities) I came across two more cyclists – Mark and Dave, brothers-in-law, originally from Barnsley and now from Dundee and Aberdeen – who were cycling around the coast of Scotland to raise funds for Mark’s Church steeple.  You can check them out at www.markcyclesscotland.com.  I stayed with them for a while, then as Dave waited at the top of a long rise for Mark to catch up, I carried on, looking for somewhere to pull in for a quick call of nature.
Soon, I saw a track off to the left – it looked like concrete, and as I swung on to it I realised, too late, that it was gravel.  Going far too fast for the loose surface, the bike went from under me and I hit the deck.  Luckily nothing was damaged apart from a scratched brake lever and a pinhole or two in my long pants – testament to the quality of Gore-Wear equipment (it ought to be good!) – and I was able to carry on, shaken but only slightly stirred, to Oban, where I caught up with Mark and Dave again. 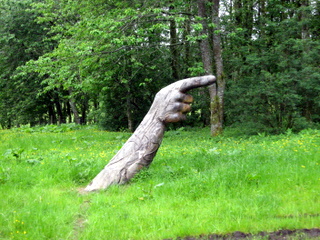 As we arrived at one of the town-centre cafes, I heard a voice say “Is that Bill?” – looked around and there were Bob and Pam Kent from Clitheroe, at the end of a wet week’s holiday and proving what a small world this is. 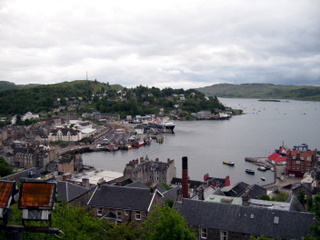 The Glen Tarsan in Oban Harbour - I enjoyed a week on this boat last autumn around Mull and the nearby lochs.  Sorry I missed the Skipper, Bob MacLeod, when I got to Oban.
Now I needed to do two things – book my bike on the trains tomorrow, which I did, courtesy of a kind lady in the Oban Station ticket office – and get to my digs for the night.  I rang John Lloyd, who I was supposed to be staying with, and it was a wrong number!  So I cycled up the day’s steepest hill, past McCaig’s Tower (that glorious folly on Oban’s skyline) and found John in his garden – phew!  John is a member of Oban Lions Club and an all-round good egg, who originates from the Midlands but appears to have been well accepted as everyone seems to know him! 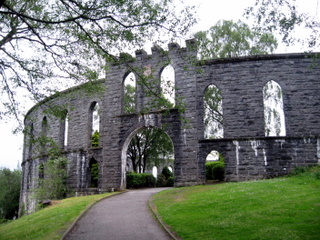 All set now for a train journey home, a wedding, and a journey back in the motorhome with new support crew John and Helen Cressey, and a companion rider, Alan Taylor.
As I wasa planning this ride I was pretty sure that the hardest bit would be the first ten days – 800 miles with no break – made even harder by the poor weather, as it happened. But I’ve done it, and when I resume I’m hoping that the pace will be a little gentler. But we’ll see what happens…
Posted by Bill Honeywell at 21:55