Today's statistics 81 miles (on the bike, plus ‘sea-miles') making a total so far of 673 miles.
Well, yesterday saw the completion of a full week’s cycling, and this morning we entered week two.  The problem has been that with no rest days, the old legs seem to have been getting more tired every day.  The hills have seemed longer, harder, slower. Admittedly there aren’t many other cyclists about, but they’ve been passing me, not the other way around. Today I felt I may have turned the corner:  the legs felt stronger, more eager to take on the hills – and just at the right time too – not only did I cycle 81 miles, but in terms of height gained, I did a lot more than climbing Ben Nevis – well over 1500 metres (4,900 ft).
After using my wet weather bike for four days (a Hewitt steel-framed road bike with mudguards)  I thought I’d risk getting the lighter, carbon-fibre Cannondale out again, because the weather forecast was optimistic. I’ve no idea why I take any notice of the weather forecasts, as they are invariably wrong – at least when I’m cycling and /or in Scotland. 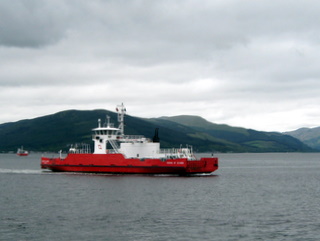 I had a good fast run out of Saltcoats to Largs, Wemyss Bay and then Gourock, where I caught the second ferry of this trip – over to Hunter’s Quay,  north of Dunoon, on Holy Loch.  Along this stretch the road surfaces were pretty good – to give you some idea of how important this is, I was doing a steady 17 mph when I noticed a cycle lane parallel to the main road, so joined that, but it was rough and uneven: my speed dropped to between 11 & 12 mph, so I went back on to the road and went straight back to 17 mph. 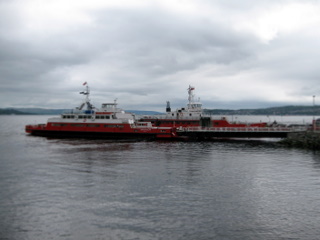 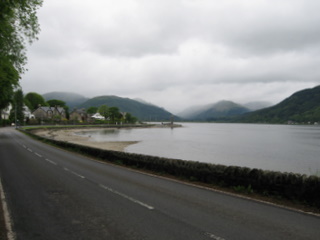 Once off the ferry I started the long climb west towards Portavadie – lots of regimented Sitka Spruce, and then Glen Tarsan on my right, reminding me of a very pleasant week last October on a boat of the same name operated by the Majestic Line.  Near here a helicopter was being used to carry wet concrete up to a pipeline on the hillside, which was quite dramatic.  The man with the Stop/Go sign said they couldn’t let cars through when the helicopter was flying over, because the drivers might fall off the road whilst craning their necks to watch!  He also told me it was 8 miles to Tighnabruaich… 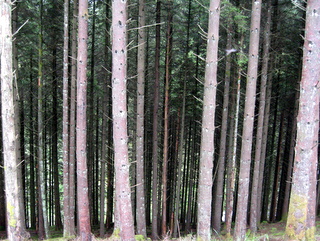 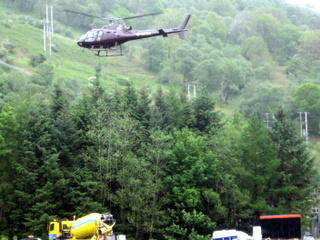 After one very long, steep hill, followed by a long descent, several miles altogether, I passed a sign stating ‘Tighnabruaich – 8 miles’ …  Then another long, long hill where the mist, clouds and rain merged into one and I was beginning to get soaked.  I was glad to see the van so that I could get some food and drier clothes on.
We had forgotten to check the ferry times, so decided to set off quickly and hope for the best. It was only three miles to Portavadie but as usual it was nearly all uphill, but as I got there the ferry was on its final approach – perfect timing! 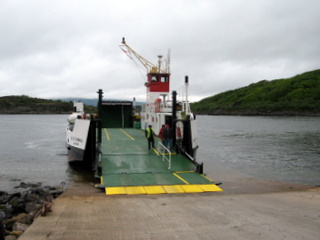 A couple on the ferry seemed interested in what we were doing and made a donation to Cancer Research (thank you!). Through Tarbert, then on to a delightful single track road through a fantastic variety of landscape – fields, moorland, commercial forest, broadleaved woodland, streams – the lot.  For those of you who know what I mean, reminiscent of the ‘long one’ on Mull (if you don’t know what that means, ask me when you see me!)  But most of all, a complete switchback – ups and downs of 1 in 7 (14%) one after another after another.  Thank goodness my legs were feeling up to it!  All with great views across to Arran,  whilst Cuckoos were cuckooing, and Wood Warblers and Tree Pipits were singing. 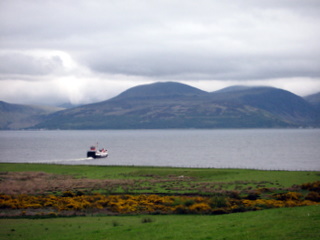 Finally, at Carradale, I overshot the Caravan Park entrance and had to do a bit of fiddling about to get back on plot. But what a great caravan site – out here in glorious seclusion, a superb site with some of the best loos and showers so far!
Posted by Bill Honeywell at 21:35