At last! A short ‘rest’ day – only 34 miles of cycling to do on easy terrain before putting my feet up.  Experience has taught me that you can’t walk or cycle moderate or long distances day after day without a rest: it may be OK for the under 30’s but for the only-just-under-60’s it will only lead to disaster.  Not that the weather is having any time off though – it seemed to rain right through the night and this morning was a case of (hardly any) sunshine and showers.  It did make a nice change to see a shadow at one time, I must admit, after I’d got over the initial shock. 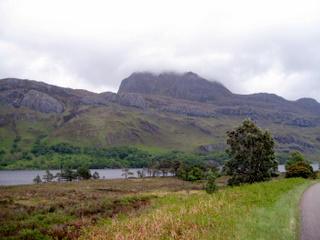 The main road NW from from Kinlochewe runs alongside Loch Maree, which is dominated by the mass of Slioch, a bulky-looking Munro which was, of course, mainly topped by cloud today, especially as we were ‘dumped on’ by a heavy shower.  One amazing sight was a convoy of 25 Italian motorhomes, all heading south, presumably having had enough Scottish summer for one vacanza. Bringing up the rear at no. 25 was a  massive all black half-motorhome half-coach: most impressive! 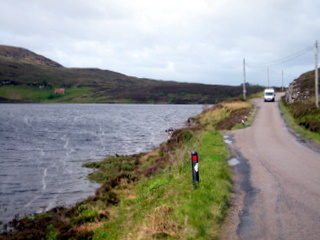 Although an ‘A’ road, it becomes single-track and rises to a freshwater loch where, at about half-distance, we stopped in a lay-by to ‘refuel’.  Another motorhome stopped and the driver, from Burnley, gave us a generous donation for Cancer Research UK.  Whilst in the motorhome an evil heavy shower passed over, which was good timing. 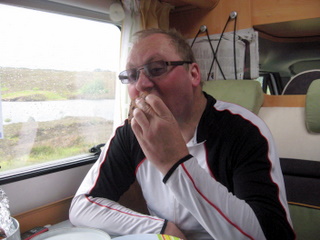 Gairloch next, where there is a branch of the Bank of Scotland all on its own outside the village. The ATM must do a roaring trade as there was a big car park and plenty of custom when we got there – just in front of a lady from Colne (is there anyone left in Lancashire?). 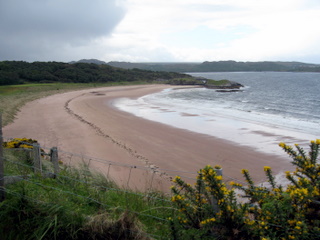 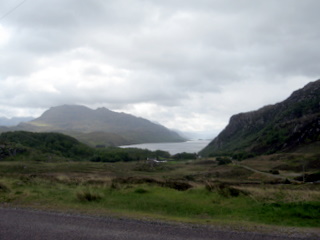 Just before Poolewe there is a great view back up the same Loch Maree that we had cycled along over half an hour before, and just after is the famous Inverewe Garden, 54 acres of garden managed by the National Trust for Scotland.  We were being treated by the occasional patch of sunshine now, but with the occasional heavy shower, just to remind us that we can’t expect any really good weather – not at the end of May, obviously.
Loch Ewe is where the Arctic convoys were based in WWII and there is still evidence in the form of the remains of the old re-fuelling rigs and gun emplacements.  After Aultbea there was a short rise and fall and there we were at Laide on Gruinard Bay – looking across to another reminder of WWII:  Gruindard Island, where experiments were carried out to test Anthrax as a biological weapon.  As a result the island was contaminated with the spores of the fatal bacteria and all access was prohibited until it was disinfected in 1987.  We’re not going across to test it. 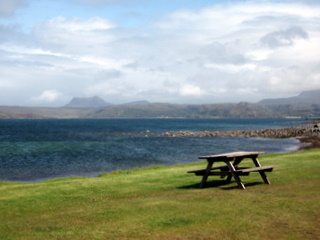 There’s an amber alert for the Aurora Borealis over northern Scotland tonight, but as our Logistics Manager Alan Breckell says, “There’s more chance of a second coming than clear skies tonight!”.
Total to date 1,112 miles – about one-quarter distance.  Only 75% of the route left then!  Keep pedalling…
I’m trying to raise £20,000 for Cancer Research UK. So far the total stands at over £5,000, but like the mileage, there’s a long way to go.  So PLEASE visit either the CRUK web site or the Just Giving site via the links on this blog, and MAKE A DONATION to help in the fight against cancer.  Whatever you can afford will be most welcome – thank you!
Posted by Bill Honeywell at 13:20