79 miles, making a total of 1,326 so far.
I was absolutely freezing when I woke up, and tomorrow is the first of June! There was a big black cloud lurking to the south, but in other directions it was clear, so perhaps it boded well for a dry day. 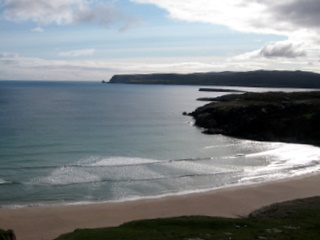 After the usual 8.00 start we passed the Smoo Caves with its interesting stick-man sign and then wondered why Durness should have a John Lennon memorial.  We had to go several miles south along one side of Loch Erribol, then turn at the head and go back north along the other side, where there was a Great Northern Diver lurking off shore.  At this point we also encountered the only real shower of the day, which I have to say is a big improvement.  We’ve been hearing lots of Cuckoos, and on this stretch – unusually – we saw two.  They look a bit like a grey Kestrel. 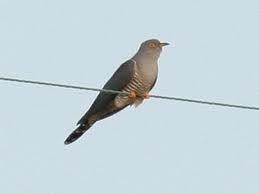 After a quick stop on the moors between Loch Hope and Tongue (where a passing cyclist kindly gave us £10 after we told him what we were doing) we crossed the Tongue causeway but then by-passed the town by a more coastal route. 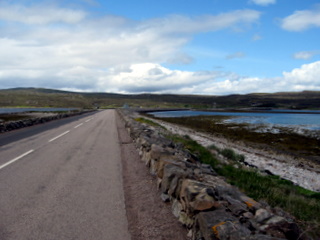 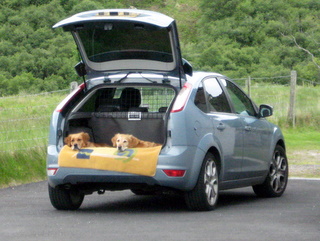 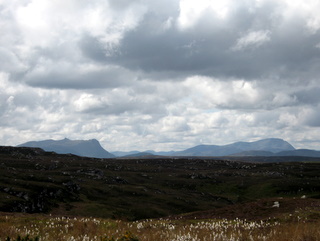 The road now became a long roller-coaster that lasted for much of the rest of the day – a never-ending series long ups and downs. At Bettyhill there’s the Strathnaver Museum, telling the tale of the area from Bronze Age to one of the most infamous episodes of the Highland Clearances.  A downhill section section in the 30 mph zone found us doing 35 mph and Mick (who is a driving instructor) feeling guilty! 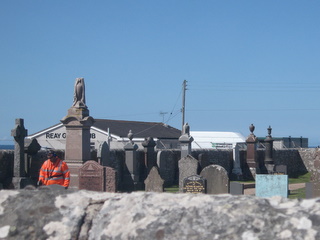 Mark and Sandra have so far done well in finding parking spots with a view, but this afternoon they excelled by parking next to the cemetery in Reay. It wasn’t even quiet, as a council employee was cutting the grass. 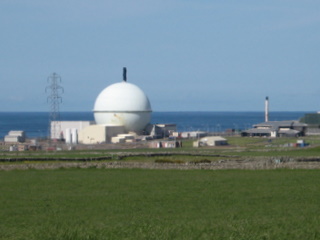 On past the partly-decommissioned Dounreay nuclear power plant (no more jokes about me glowing, please!) with the wonderfully ironic juxtaposition of six nearby wind turbines (two of which aren’t working – even more ironic), and then to Thurso, easily the biggest town on the route today.
From there it was an easy few miles in the late afternoon sunshine (yes, sunshine) to the Caravan Club site at Dunnet Head, where I was admonished by the warden for cycling in the WRONG WAY, against the One-Way system (“Health & Safety you know”)
Actually, today has been a day of signs – here are just a few:
Smoo Caves, nr Durness – A Matchstick-Men sign saying “Danger – People Below”
Loch Resipoll – Home-made chevrons at a left-hand bend to stop drivers overshooting on to someone’s drive
Car stickers in Tongue saying “I LOVE TONGUE” (I’m a boiled ham man myself…)
On a loch side underneath overhead power lines – “Cast Carefully” 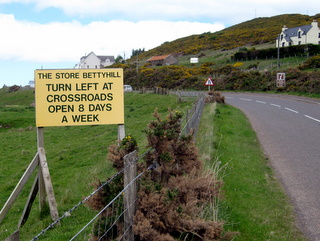 Bettyhill Stores “Open 8 Days a Week”
In Thurso – “ZEBRA CROSSING – Drivers MUST Give Way (Highway Code)”
At the caravan site – “SERVICES – No payphone”
Almost a rest day tomorrow – fewer than 30  miles, but including a visit to Dunnet Head (Britain’s most northerly point, despite what the Rotary Quizmaster said a few months ago!) and Duncansby Head, which is the most north-easterly point. We’ll be staying at John o’ Groats, which is neither. If anyone can explain why it should be Land’s End to John o’ Groats rather than Dunnet or Duncansby Head, please let me know!
Posted by Bill Honeywell at 21:21