If you’ve ever fallen asleep in the bath, then woken up an hour later when it’s gone cold, you tend to remember (a) how cold it feels and (b) how your skin looks like something related to a wrinkled prune.  Now, try to imagine being in the bath for five hours, and you’ll have some idea what today was like. 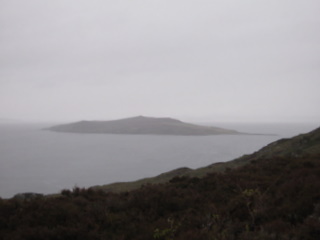 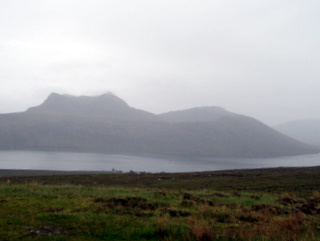 An Teallach
The light rain that greeted the day seemed almost benign. Remember, this is Day 17, and on EVERY day except Day 1 it has rained. Sometimes for the entire day, and sometimes very heavily indeed. So I ended up thinking “I’ll take that” when all the weather could provide was light rain.  But soon it turned heavy.  An hour into the ride it was lagging it down, as they say in Yorkshire. Lloviendo a cántaros, as they say in Madrid. When we’d climbed forever up to the top of the pass south of Dundonnel and started the long, long descent, it was making my stair rods look anorexic, and the road took on the appearance of a riverbed. 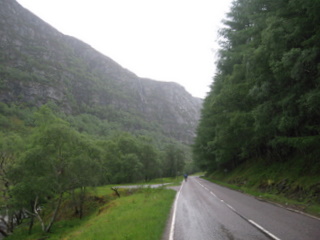 We were drenched, absolutely drenched, despite the full waterproofs. Because enough rain was falling on my head to run down my neck and inside my clothing. Al discovered that his once his waterproof socks filled up with water, it couldn’t go anywhere but out at the top. 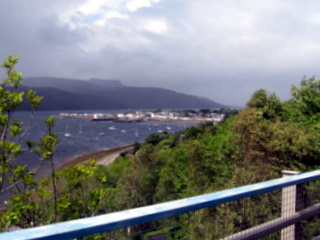 At the bottom of the pass we had a few miles of respite as the wind was behind us, but soon, as we approached Ullapool, it swung round into our faces, the rain STOPPED and the sun came out.  This state of affairs lasted for ten minutes, until the showers arrived.  And what showers!  Almost overlapping, every fifteen minutes, torrential and then with big hailstones.  Not nice. 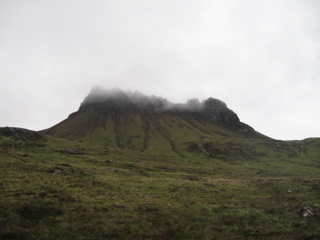 North from Ullapool we took the scenic coastal route past the ridiculous mountain called Stac Pollaidh – an incredibly steep little monolith that looks so out of place, but a proper mountain. This road is incredible, with different views around every corner for the whole of its 20-odd miles, before you arrive exhausted – physically and mentally – at Lochinver, a small fishing port with a particularly impressive war memorial.
Cycling like this plays havoc with your emotions.  You’re either up or down, but it’s like a roller coaster, as follows:
UP – a good start, only light rain
DOWN – the rain gets heavier
FURTHER DOWN – rain of Biblical proportions, every inch of body saturated
UP – tailwind, rain stops
DOWN – wind gets stronger and turns into headwind
FURTHER DOWN – heavy showers start
EVEN FURTHER DOWN – showers turn to hail
UP – showers stop
FURTHER UP – a patch of blue sky
EVEN FURTHER UP – Wow!! Stac Pollaidh, Suilven, vintage French cars, photogenic group of cows and calves
A BIT DOWN – Road keeps going up and down, it’s taking a long time to get to the finish
BACK UP – Arrive at finish, Achmelvich beach looks idyllic (if only it were 20° warmer!) 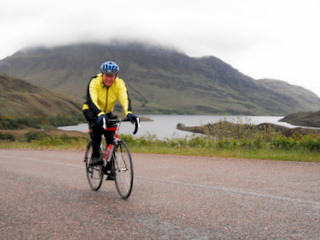 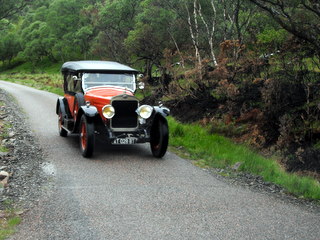 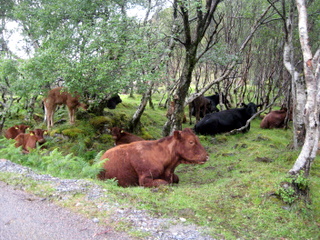 Alan left tonight, as new van crew - son Mark and daughter-in-law Sandra arrived for a week’s stint.  Alan’s parting words were “Well, I’ve had a wonderful holiday, but this wasn’t it!” (apologies to Groucho Marx).
Posted by Bill Honeywell at 19:05