Today started off dry.  By 10.30 it was raining steadily, but not too heavily. From 1.00 to 5.00 it absolutely poured down.  It has without doubt been the best weather so far this week, by a long way.
Early start this morning, with Derek knocking on the door of the van wondering why we weren’t up at 6.00 am.  That was because we said we were getting up at 6.15.  Get dressed, clean teeth etc, make sure we haven’t left anything in the house, then drive down to the jetty in Tobermory and have breakfast waiting for the boat. 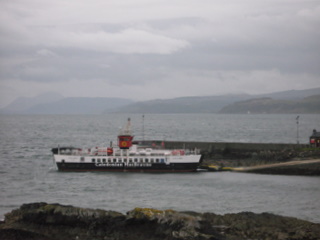 It’s a small ferry that runs from the main town of Mull across to the village of Kilchoan on the Ardnamurchan peninsula.  In the morning, amongst other things, it carries secondary school children from Ardnamurchan to the school in Tobermory.  On our journey it was as if we had chartered our own boat, as we were the only vehicle and the only souls on board, apart from the crew.  Hard to believe, but it wasn’t raining. 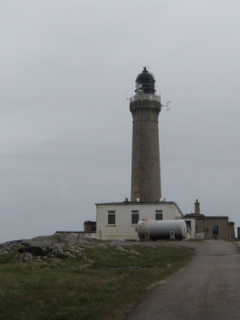 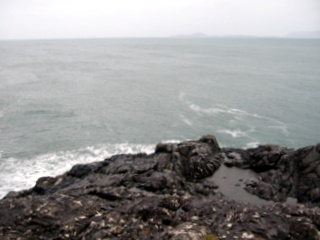 Arriving at Kilchoan we left John and Helen to have their breakfast while we cycled the six miles to the most westerly point on the British mainland – Ardnamurchan Point, where there is a lighthouse, visitor centre, and a set of traffic lights!!  The road is undulating but we had a bit of a tailwind there, so it was a gentle warm-up.  It was a bit misty but we could still see the islands of Rum, Eigg and Muck.  It’s a Stevenson Lighthouse (same family as R L Stevenson of ‘Treasure Island’ fame), and there is a massive foghorn with three huge compressors to provide the ‘oomph’. 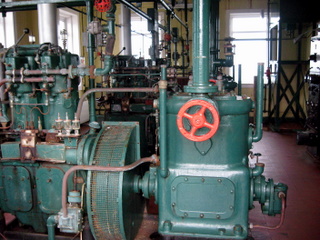 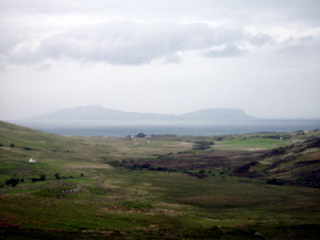 Next stop, after skirting Ben Hiant and enjoying views over the crater of the extinct volcano that makes up much of the peninsula, was the rather fine Ardnamurchan Visitor Centre, where some of the visitors, enjoying a nice cup of tea, decided that I must be mad.  Well, I thought, possible, but sane, all the same…
As the rain began (of course) we passed Glenborrodale Castle and another reminder of Monday’s storms, a beached yacht.  It must have been a bit too exciting, as there was clear evidence from the open hatches that someone must have been on board when it ran into trouble. 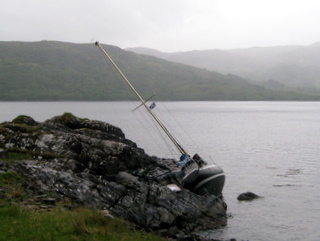 Through Salen, Acharacle (nice bridge) and Kinlochmoidart, along the picturesque (normally) Loch Ailort on a road so rough it could knock all your fillings out, to the main Fort William to Mallaig road and a quick brew at the Polnish Church with its fine viewpoint.  The road passes over and under the Fort William to Mallaig railway line here (as seen on Harry Potter films) and it seems quite spectacular.  But the rain was beating down and the wind was picking up: fortunately it wasn’t too much of a headwind as we had plenty of hills to climb, before finally reaching Arisaig and the pleasant coast road alongside pretty beaches to arrive at Camusdarach Campsite where we are spending the night. 67 miles today, at an average of 10 mph, not too bad considering we climbed nearly 5,600 feet into the bargain.  Total now 963, so tomorrow should see me reach 1,000 as we hop on and off the Isle of Skye and finish the day with the biggest, longest climb in Britain – the Bealach na Ba over to Applecross: over 2,000 feet of ascent in one unbroken climb.  Perhaps the guy at the Visitor Centre was right…
By the way, by way of an ending, I hope you are all enjoying reading these blogs, but PLEASE remember that I’m doing all this madness to raise much-needed money for Cancer Research UK.  So PLEASE visit either their web site or the Just Giving site – the links are on this blog – and MAKE A DONATION to help in the fight against cancer.  Whatever you can afford will be most welcome – thank you!
Posted by Bill Honeywell at 21:39