Arisaig to Applecross – 65 miles cycled.
This blog began as the story of a cycle ride around the coast of Great Britain to raise £20,000 for Cancer Research UK.  It is fast becoming a saga of Atlantic depressions lining up to outdo each other in terms of the amount of wind, rain and misery they bring.  Don’t forget this isn’t winter: we are now only four weeks away from the Druids getting an early alarm call at Stonehenge, yet here in the NW of Scotland each passing day brings more record-breaking foul weather.
Today was no exception.
Together with ‘big’ Al Taylor, my cycling companion for this week, I left the Camusdarach caravan site at about 7.20 for the five mile ride to Mallaig, to catch the 0810 ferry to Armadale on the Isle of Skye.  We had a fairly big day ahead – 70 miles with a grand finale up the hill voted the biggest and most serious in Great Britain – the Bealach na Ba, or Pass of the Cattle:  over 2,000’ of unbroken ascent before a similar drop into the village of Applecross on the west coast.
A tiny patch of blue sky was the subject of some conversation but it didn’t last more than five minutes.  By the time we had passed some lovely beaches and reached the main Fort William – Mallaig road I thought time was going backwards as it was turning almost dark.
As with most first ferries of the day, there were hardly any cars and not many more passengers on board.  The lady in charge of the reception desk told us it would get stormy again this afternoon, and a lone German foot-passenger bemoaned the lack of a gangway.  We soon reached Armadale on Skye, and by now the wind was driving the most wetting kind of heavy drizzle and the temperature was struggling.  As were we – after a few quick miles the road started to climb, and the fierce headwind, driving rain and temperature of around 6° (yes, SIX degrees!) started to wear us down very quickly. 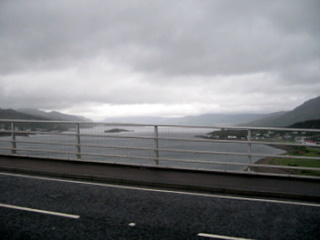 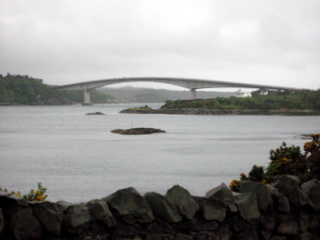 John and Helen came across in the van on the next ferry, and passed us only a few feet before a lay-by, which John turned into straight away.  I was much relieved to be able to stop for a rest, and was pessimistic about the rest of the day, especially the Bealach na Ba.  However, after a coffee and some cake we were sent on our way, and as we crossed the Skye Bridge and dropped into Kyle of Lochalsh, the rain eased and the wind dropped slightly. 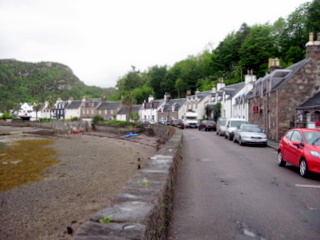 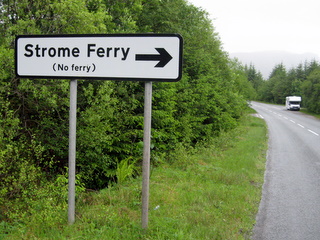 A pleasant hour or two followed, with a visit to the pretty village of Plockton and then a steady run around Loch Carron, at times alongside the railway line.  As we passed through a short tunnel we were overtaken by three Porsches, an Audi and a motorbike – obviously having almost as much fun as we were! 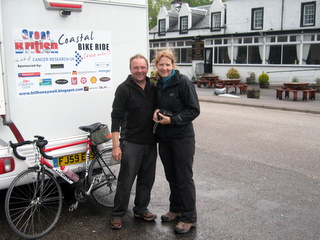 Through Loch Carron, then before the grandstand finish a warm-up – a long steep ascent and descent to Loch Kishorn.  As we turned left after the village of Kishorn to start the final climb the van was waiting with Blueberry muffins for a few more calories and Mick Bryan, our replacement driver for the next three days, arrived and was sent on to the caravan site to book us in before the office closed at five o’clock. 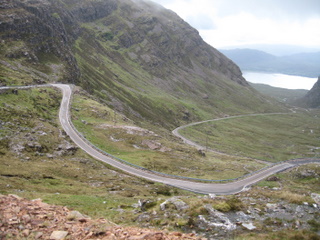 At first the climb was no problem, although now the rain was getting heavier and heavier, and the wind was getting stronger and stronger. At first I thought we would manage, but eventually, about three-quarters of the way to the top, the wind turned head-on and became so fierce that we could hardly stand, never mind ride. We got off and pushed for a while, unable to remount without being dashed to the floor.  But we were getting soaked and very cold. We asked a motorist coming down how far it was to the top – she said still quite some way: so when the next car came up in our direction and stopped to ask if we were OK, we said “No!”, left our bikes near the side of the road and accepted a lift to the top where the van was waiting.  Mick was there too, as both he and John, having seen the conditions near the top, knew we would be unlikely to manage, so we were quickly warmed up, the bikes were rescued, and we were taken down to Applecross in driving torrential rain, a little crestfallen.
But what else could we do?  There was no point risking being blown off the bike, or getting hypothermia.  And Mark Beaumont had to accept a lift on his round the world challenge, and that didn’t affect the acceptance of his result.  But it’s still a big disappointment.
However, we’ll go back to where we left off tomorrow morning and start again. Providing when we wake up it’s clear blue sky, flat calm and 18°.  And I’ve seen the forecast…
Posted by Bill Honeywell at 20:34