66 miles; total 3,437 miles
My son Mark is keen on cricket and I often remark how the game is dominated by statistics, with some record being broken at every match – “the first double century by an opening pair who are both over 6’6” and married to someone called Janet” and so on. Now I notice the same thing is happening to this bike ride.  Today I reached the most south-westerly point on the British mainland – Land’s End; I turned the corner and started heading towards home at last; and, most significantly, the distance remaining is now for the first time less than 1,000 miles!
At about one o’clock this morning I was woken by a very loud fox nearby.  It didn’t waken Ian or Richard, and I was soon slumbering again.
Almost as soon as I had set off, I tried to change gear and the cable broke, sending the chain straight on to the highest gear and making it impossible to get up the hills around here with my skinny legs.  I’ve had this problem before (gear cable, not skinny legs) and it can be a nightmare as the nipple at the end of the cable is horrendously difficult to get out of the lever mechanism – and you cannot leave it in unless you want to risk terminal damage.
I rang the van and we quickly met at a lay-by so I could swap to the spare bike.  By the time I got to the first pit-stop near Land’s End, Richard had managed to fix it and I swapped back. 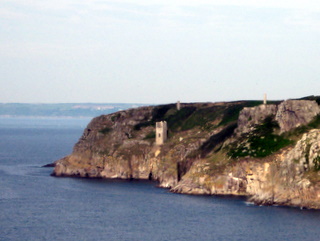 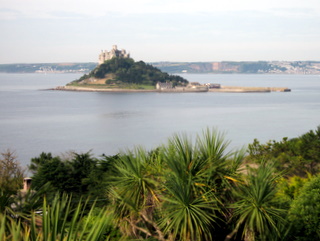 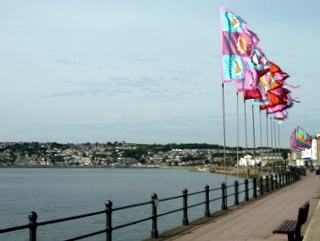 Meanwhile I headed through Porthleven (remember Val, where we stayed on the SW Coast Path?) then through Marazion, past St Michael’s Mount (the tide was in, no chance of a visit) and Penzance.  Next came Newlyn, a not-so-pretty harbour area where the Ordnance Survey measure the official sea-level for the whole country, and then the oh-so-pretty Mousehole (pronounced ‘Mowzel’, but I’m sure you knew that), where there is a leg-breaking climb out of the village. 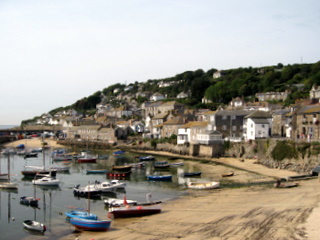 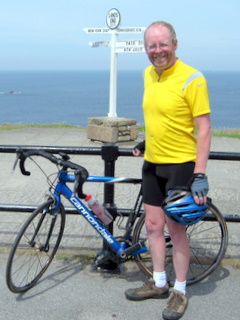 Land’s End is brash, busy and over-commercialised, with plenty of people there even on a non-holiday Monday.  I suppose it’s a more elderly clientele at this time of year, and certainly the toilets appeared to be the busiest attraction.  Having spent a tenner eight years ago to have my picture taken by the famous signpost I decided not to bother this time, but I did write an entry in the ‘End-to-Enders’ book, making clear that this wasn’t any ordinary LE-JOG ride!
After Land’s End and the couple of miles back towards Penzance I entered new territory, heading along the north coast towards St Just and, much later, St Ives.  Once past grass runway of Land’s End Airport, the countryside becomes rather harsher than the south coast – more like Bowland Forest Meets The Sea. Still attractive but in a different kind of way.  There are signs of old industry and hardship too, with abandoned tin mines, including the one at Geevor. 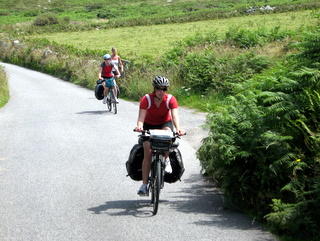 Every kind of road user... 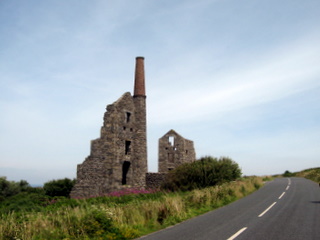 It’s a beautiful, twisting road with manageable ups and downs, and on one of the downhills a wasp must have collided with me and got trapped inside my shirt: I felt a sharp pain and instantly knew what had happened, got rid of the pesky insect and had no alternative but to carry on.  As I sit writing this I have a massive red weal on my chest… sorry, only kidding, you can’t even see where it stung me. I’m fine, really. 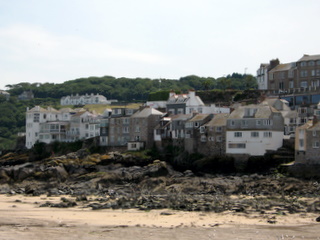 The contrast of busy, bustling St Ives, after the almost desolate countryside, is striking.  St Ives must have more art galleries and art shops per sqare yard than anywhere else in Britain.  In contrast, Hayle, just a little further on, seems an almost anonymous seaside town with its small harbour and extensive estuary. 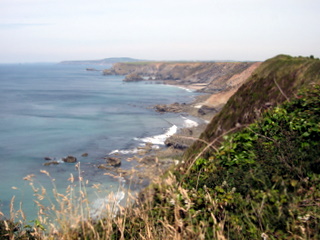 The final eight miles to Portreath (which seems to be something of a surfing Mecca) run just back from the cliffs, and the views aren’t spectacular unless you get off your bike and go to the edge – then they’re magnificent.  I heard some Peregrines calling and looked up to see a pair really high up, flying across the line of the cliffs, in contrast to the other birds of prey today – it’s been a record day for Buzzards – I must have seen at least 20.  Nice to finish as I started, with another ‘record’.
It looks like there’ll be a lot of climbing tomorrow on the way to Tintagel – 6,000 ft in 66 miles – so I hope my skinny legs have still got some strength left in them! KPO, KPO.
Posted by Bill Honeywell at 21:00