44 miles – total 3,716 miles
Today started with an interview – for www.burnham-on-sea.com – Mark came out to see us off and take a photo, which hopefully will feature soon.  He mentioned that we were leaving ‘over the moor’, and as a result I thought we would have some steep roads to contend with.  But apparently ‘the moor’ in this area is nothing like the moor at home – in fact, it’s completely flat – just a section of the Somerset Levels, in fact! 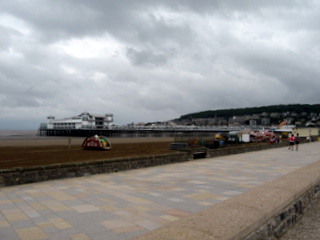 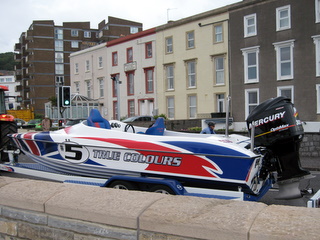 Our first port of call was Weston-Super-Mare, home of that renowned (?) politician and author, Lord Archer.  As we approached the seafront, roads were closed and diversions were in place for a Channel 4 pop concert featuring JLS (I thought they sold sofas).  The pier, which was burnt down in 2008, has recently been re-opened and now looks very swish.  Further along, power boats were converging (on the road, strangely – I thought they’d be better off in the water), so presumably a major power boat event was in the offing. 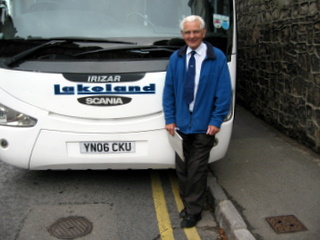 And then a bit further along still we came across a Lakeland Coach which was on a trip to Weston – now Lakeland Coaches are renowned in the Clitheroe area (where I come from) as the best, most reliable, most value-for-money coach outfit there is. I’m saying this because I know John Lakeland very well and I gave my details to the driver to pass on to him in the hope that John will now make a generous donation to Cancer Research UK – hint, hint John! 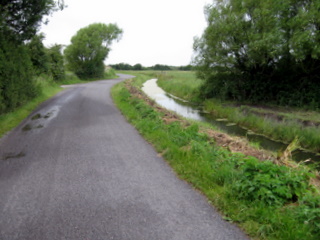 The lanes across the Somerset Levels near the coast are characterised by wide, water-filled ditches running alongside.  At one point I came acrosss a Mute Swan by the side of the road: it was obviously camera-shy because it hissed at me very loudly as I passed by. 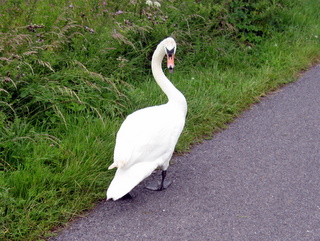 Carrying along near the coast through fields and small towns, we passed through Clevedon and then arrived at Portishead, where there was a boating lake with various dinghies looking like they were all about to collide with each other. 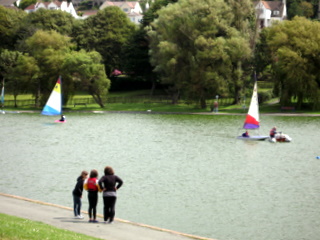 The road got busier as we approached Bristol and crossed the M5, before a steady climb took us to the wonderful, exquisite, marvellous Clifton Suspension Bridge, built by that great man whose parents must have had a strange sense of humour – Isambard Kingdom Brunel.  The views, both of and from the bridge, are just superb. 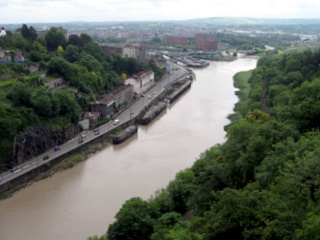 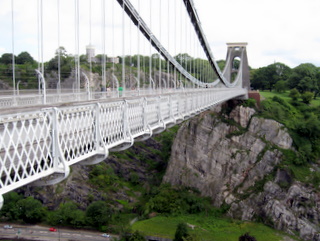 Then it was down through Bristol and over a swing bridge (which was opened for water traffic, just like a level crossing, so we had to wait) to the Baltic Wharf Caravan Club site.  The wardens here are terrific and have been round all the other tourers with a collecting bucket, raising money for our Cancer Research UK appeal – thank you guys! 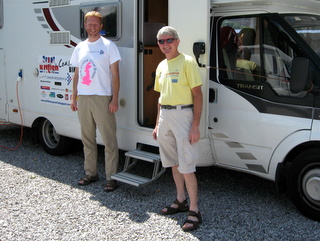 Frank and Bernadette Brown, my new crew for the following week, were here when we arrived, so it was many many thanks and goodbye to Ian Hardy and Richard Dugdale and hello to Mr & Mrs Brown.  As we had some time to spare we visited one of Isambard Kingdom Brunel’s other creations, the SS Great Britain – and spent nearly two hours looking at the dry dock, the museum, and the ship itself – all absolutely fascinating. 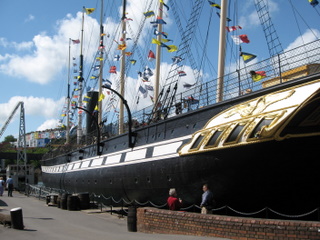 And what do you think of this strange garage door nearby, with writing that reads differently from either direction? Very clever! 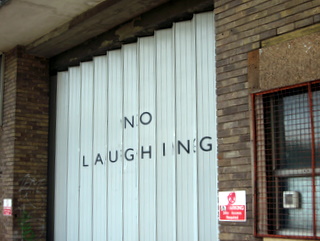 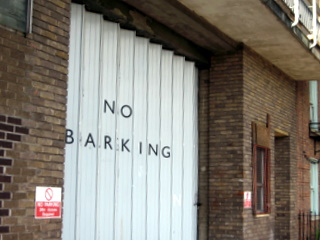 So a fairly big day tomorrow – 79 miles, into Wales, where I’ll be for over a week; over the Severn Bridge (I hope the crosswinds aren’t bad) and through Newport and Cardiff.  I’ll let you know how I got on tomorrow.  KPO…
Posted by Bill Honeywell at 20:16