80 miles;  total mileage now 3,797.
A dry day without a drop of rain!! I haven’t counted but I’m guessing that might take me on to the fingers of my second hand after 59 days!  It just needs to warm up now: 28°C would be nice!
Now and again something happens to warm the cockles of your heart and last night it was Mike and Lyn Stirling, wardens at the Baltic Wharf Caravan Club Site in Bristol, who went round all the caravanners and raised over £90 for Cancer Research UK. Thank you to Mike and Lyn and all those who donated.
Mind you, Bristol is party city on Saturday night – the discos could be heard for miles around. Not to worry – after nearly 60 days cycling without a break, getting to sleep isn’t a problem whatever happens!  Bristol also hosts an annual hot-air balloon festival – and this morning someone was obviously practising! 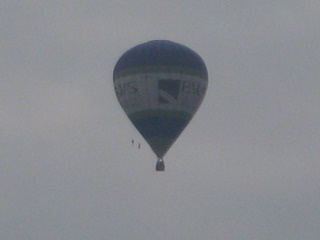 I left the city on the Westbury Road, past rows of Limes and Horse Chestnut Trees, and then made for the old Severn Bridge, where there is a cycle lane on each side. I love the engineering that goes into these bridges (although yesterday’s Clifton Suspension Bridge will take some beating). 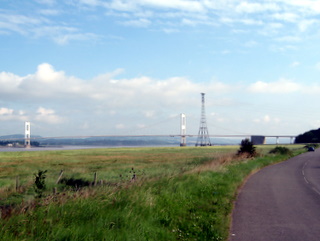 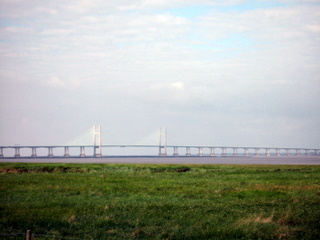 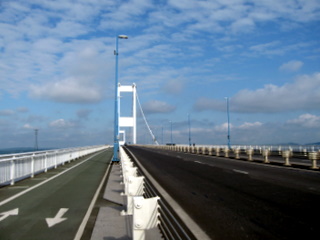 Once on the other side of Britain’s longest river, I was in Wales – another milestone, having been in England since 9 June. To think it’s taken a whole calendar month to cycle from Berwick-upon-Tweed to here. Time I speeded up! 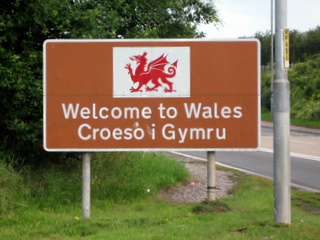 Caldicot Level, between Chepstow and Newport, is a bit like the Somerset Levels, and made for easy cycling in the fine weather.  I skirted most of Newport but then had a bonus! – the Transporter Bridge over the Usk is like the one in Middlesbrough, but unlike Middlesbrough, this one was open.  What’s more, there was a ‘Zip-wire Challenge’ from one of the top stanchions, which had me sorely tempted, but I resisted. I’ll wait until I’m 60 and then do a bungee jump in New Zealand (they don’t charge the over-60’s!!) 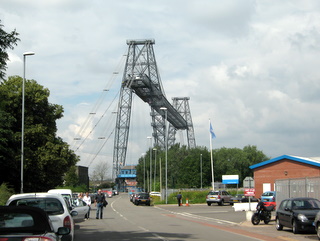 Lunch was taken at St Brides, where Frank and Bern had parked at the entrance to a field with three friendly horses.  But from here on, the rest of the ride changed character, becoming completely urban with hardly a rural interlude at all.  Cardiff was difficult to navigate (the National Assembly Building was interesting though), and as bikes aren’t allowed on the bridge over the River Taff, I had to take a cycle route which ended up with me trying to find my way out of a Morrisson’s car park! 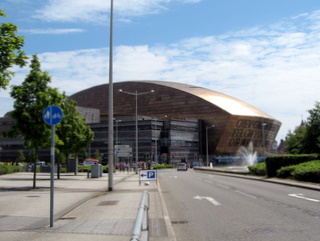 Penarth and Barry are clearly popular resorts. I’m sorry I’ve never watched Gavin and Stacey, as it sounds like I’ve missed out on some interesting connections Barry-wise. Perhaps I’ll watch the repeats when I get home, if I can remember how to operate the remote control. 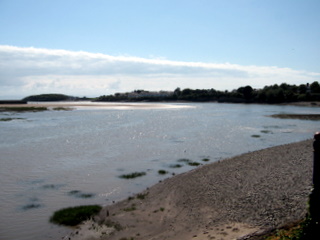 I skirted Cardiff International Airport: at the end of the runway a group of plane-spotters was gathered, and at exactly the moment I arrived, four old jets – Hawker Hunters I think – screamed low overhead in close formation, wingtip to wingtip, along the line of the runway. Too fast for anyone’s camera.  Can anyone tell me who or what they were?  I suggested to the plane-spotters that Greece would be a good destination, with warmer weather, but they said they preferred Cardiff. Pity, because with a bit of luck they could have got a few months’ free accommodation too, though I understand it’s a bit on the rough side. 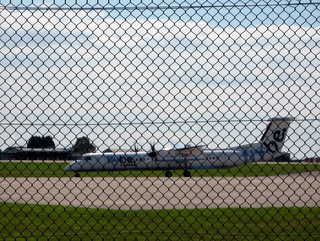 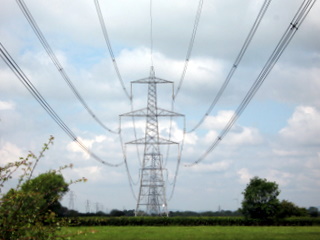 ...I just felt artistic with the power lines...
Finally a power station and a cement works before arriving at the Acorn Caravan and Camping Site in Llantwit Major.  I thought for a moment I’d arrived in France, as the place was overrun with French teenagers – who clearly prefer the environs of the toilest and showers to any outside activities! Ah to be jeune again!
Another 70+ mile day tomorrow, to Swansea and a tour of the Gower Peninsula – more new territory for me – but getting closer to home all the time…
Posted by Bill Honeywell at 20:34