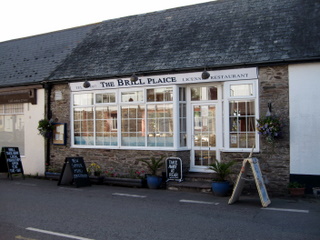 Our friends Andrew and Merida Drysdale had arranged an evening out at the Brill Plaice, a friendly restaurant in the middle of Stoke Fleming.  They had also invited along Merida’s cousin Geoffrey Newman, his wife Mary, together with their daughter El and boyfriend Simon Curtis.
Last year Simon rode between FIVE and SIX thousand miles, visiting all the lighthouses in Britain, to raise awareness for Ovarian Cancer – so I certainly had something to talk to him about!  You can find his excellent web site at http://www.cyclethelights.co.uk.  Geoffrey and Mary met many years ago while supporting one of Ranulph Fiennes’s Arctic expeditions.
Andrew has spent a life in the insurance industry before his retirement, and Merida has been very much involved in the National Trust for Scotland. Then there was me, Val, Alan, and my brother John, cruise travel writer and former managing editor of the Daily Mirror.
So as you can imagine the conversation hardly stopped, and was constantly enlivened by Andrew’s stories of life which had us holding our sides, especially the story of how he dealt with the annoying man with the mobile phone on the train many years ago.  He says he is going to write a book entitled…  No, I’d better not make the title public – it’s so good someone might pinch it!
I’m afraid I also made a pig of myself by eating lots and lots of mashed potato with my duck, and then three big scoops of ice cream. 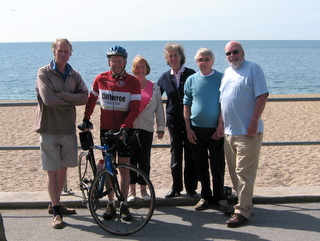 At Blackpool Sands this morning - Geoffrey Newman, me, Val, Merida Drysdale, Alan Breckell, John Honeywell
Then this morning we followed on with a visit to the Venus Café at Blackpool Sands where we were treated to their full English breakfast in the most superb surroundings.  Geoffrey and Merida came with us, but Simon and El had to work, whilst Andrew had to leave early for London.  It was a wrench to leave and set off cycling again, even though it was to be a short day.  Which I’ll tell you about shortly.
Posted by Bill Honeywell at 17:41