42 miles; total 3,672 miles
I’m not one to complain, but I’m beginning to wonder why the weather forecast on the BBC web site is so hopelessly inaccurate.  If it was just the odd time I could understand it, but day after day the forecast is miles off the mark!  For the last few days, since I arrived to mess up the good weather they were having here in the south-west, the forecast has been for sunny periods and light rain showers.  In the event, the weather has been mostly overcast with long periods of rain, usually heavy.  A person could do better with a piece of seaweed.
A gentle rest day was planned for today, with only 42 miles and some gentle hills in the Quantocks before reaching the flatter terrain further east.  After cycling through Blue Anchor (where several ships were anchored out in the Bristol Channel) the first stop was Watchet, a really nice harbour town with some olde worlde streets and a harbour-side market square. 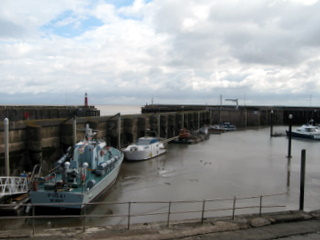 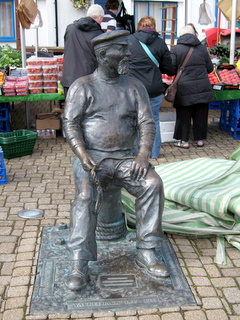 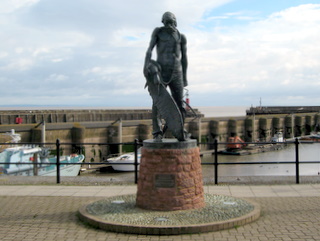 Coleridge's Ancient Mariner
There are two fine sculptures here, one of a ‘Watchet Shantyman’ called Yankee Jack, the other of the Ancient Mariner from the poem by Samuel Taylor Coleridge, complete with dead albatross around his neck.  It’s a great poem if you haven’t read it – I love the lines when he is becalmed and adrift in the tropical sea –
“Water, water everywhere, and all the boards did shrink,
Water water everywhere, nor any drop to drink.”                      Classic stuff! 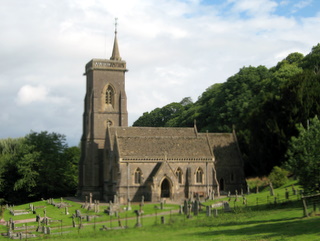 The church at St Audries
Enough of this culture.  After a few more miles, including some nasty stuff on the busy A39, we headed off through the hamlet of Kilton to where Ian had parked the motorhome outside a “non-denominational, wayfarers’ church”.  What’s that? you may ask, as we did. Well, up rolled a lady (who was none-too-pleased that we were parked in the gateway) who explained that the church would have closed and been relegated to the status of ‘controlled ruin’ with the roof removed and walls capped, but she intervened and now appears to be the owner. Inside it’s just like an ordinary church, although it’s in very good condition, and of course it doesn’t have a vicar. 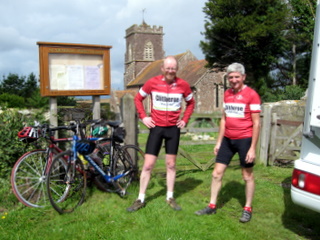 Richard and I at St Nicholas' Wayfarers' Church (with Motorhome blocking gateway)!
To be honest I thought we were never going to get away, as she explained the history and all the structure and renovations in great detail, but eventually I managed to say, as she paused for a quick breath, that we needed to get going. Which is what we did. 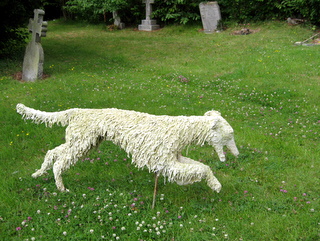 Churchyard sculpture
Now in more level country lanes, we passed by the nuclear power station at Hinkley Point before arriving at Bridgwater, which we skirted in the hope (unfulfilled) of avoiding heavy traffic.  Clouds were gathering, and after crossing the Huntspill River it came on to rain heavily. Sheltering by a hotel wall to put on my waterproof top, Richard came up with the much better idea of going inside for a coffee – which kept us dry, for a while at least! 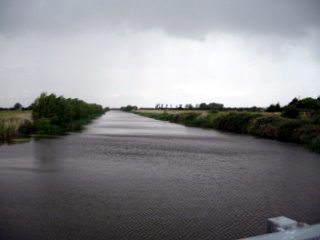 Huntspill River
But as we travelled through Burnham-on-Sea, another downpour caught us, and then, with only half a mile to go to the caravan site, Richard got a front puncture. Fortunately he managed to pump it up to pressure enough to get to the end without having to repair it on the road.
Here at the site it’s been one drenching shower after another.  On my return from the shower block I got caught in such a downpour I was soaked. I might just as well have stood outside naked with a bar of soap, although that may have raised a few eyebrows in the genteel surroundings of the Caravan Club site here (whilst on the subject, why oh why do CC members insist on taking their dog for a morning walk dressed in pyjamas and slippers (not the dog, the people) – it’s a bit beyond the pale if you ask me!
OK, that’s it, an easy day again tomorrow, Saturday, so it’s a change of crew too. I’ll be sad to see Ian and Richard go (Richard has been looking after the bikes and Ian has played a star role as motorhome driver, navigator, cook and bottle-washer, much of it on his own while Richard has been cycling with me.  I’m sure he’ll be glad of a rest when he gets home – so go easy on him Carol!  Tomorrow my very good friends Frank and Bernadette take over – I imagine all the menus will have been organised well in advance.
PLEASE remember that I am cycling 4,400 miles to raise £20,000 for Cancer Research UK.  The total is now nearing £11,000, so there’s a long way to go, yet giving is so simple – just visit http://www.justgiving.com/Bill-Honeywell and donate! Please!! Thank you!
Posted by Bill Honeywell at 17:56