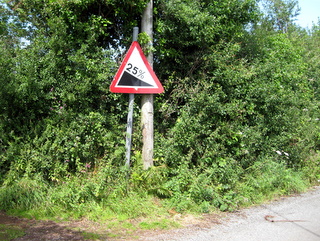 Now I knew that the six-day section around the South-West peninsula - from the last ‘easy’ day at Hope Cove to Minehead in Somerset this evening – wouldn’t be easy, and I was right!  408 miles with 32,000 ft (10,500 metres) of climbing (that’s more than the height of Everest), culminating in today’s leg-breaking climbs to the north of Exmoor, have been quite a test.  I’m glad this section’s over, but it has been spectacular and very satisfying.
Last night’s sleep-disturbing wildlife, after the fox near Helston earlier in the week, was a Tawny Owl, which made a bit of a racket around 1.00 am.  Once again neither Ian nor Richard heard a thing, and I’m supposed to be the heavy sleeper!  When the alarm went off at 6.30 I just wanted to turn over and go to sleep again, especially after some of the heavy overnight showers, and the fact that it looked grey and damp outside.
I soon got on my way though, in full waterproofs, and after yesterday’s comments about the drivers in Barnstaple I have to confess I felt a tinge of satisfaction when the van driver in front of me was pulled over by the police for using his mobile phone whilst driving. I wonder if it’s an offence to use a mobile when cycling? 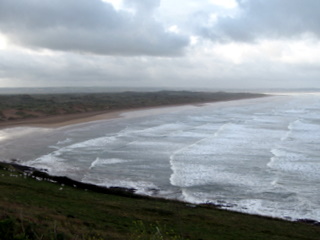 A rather grey Saunton Sands 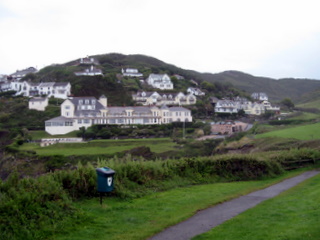 Woolacombe
I knew it was going to be hilly today but I thought the first section, through Saunton Sands, Croyde and Woolacombe to Ilfracombe, wouldn’t be too bad.  Wrong!!  At times I thought I was never going to stop climbing at a snail’s pace.  I’m sure I spent 80% of the time on that first stint crawling uphill.  I was tempted to take a break when I spotted a couple of abandoned car seats but I doubt whether that would have been advisable. 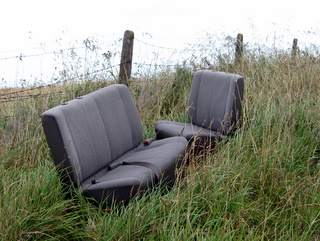 The scenery was fantastic though, and worth the pain of dropping down to sea-level and then having to climb all the way back up - like here at Lee Bay: When I met the van at a very scenic car park in Combe Martin, the weather had brightened up: Richard was already in his gear and had got my dry-weather bike out, so I ditched the waterproofs, but as the weather still could not be described as warm, I kept a couple of layers on. 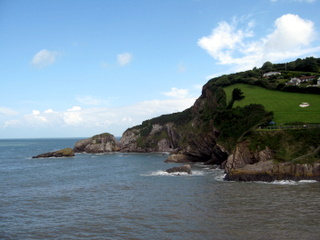 The view from the Combe Martin car park
The action started straight away with Shute Lane, Combe Martin, which felt almost vertical and took us up over 200 metres in little over a mile.  And if that wasn’t enough, when we got to the Hunter’s Inn, we were faced with a ‘1-in-4’ which was so steep I felt I couldn’t stay on the bike, so, for the first time since the wind blew me off on the Bealach na B­a in Scotland, I got off and pushed for a hundred yards – until it became a more manageable 1-in-5 and I got back on. It stayed like this for about a mile and a half! 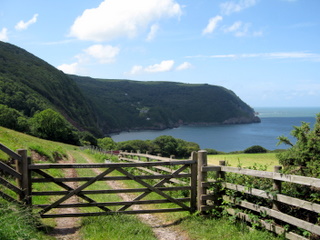 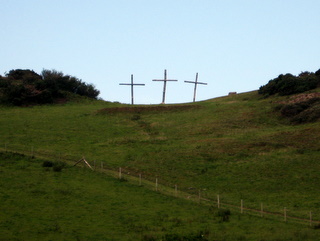 The toll road along the north coast west of Lynton is amazing, running along the precipice with big trees all around, then rising up to Lee Abbey (where there is a chilling group of three crosses on the skyline) before passing by some striking rock formations and dropping, first to Lynton and then to Lynmouth. 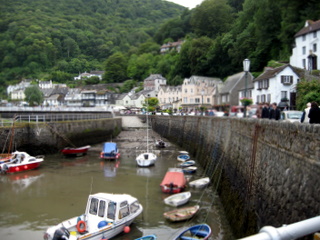 It was herein August 1952, three weeks before I was born, that a massive downpour (a bit like Boscastle which I visited yesterday) wreaked havoc when the river raged through the town carrying boulders the almost the size of houses – the Memorial Hall pays tribute to the dozens of people who lost their lives.
Countisbury Hill used to strike fear into many a motorist and caravanner, and I must admit I thought it would be a hard test.  It turned out to be a babe after the other hills earlier today – after a short so-called 1-in-4 section at the bottom (more like 1-in-6 if you ask me) it settles down to about a mile and a half of 1-in-8 – in which you can get your head down and get a good rhythm going.  Seriously, after what I’d done earlier, it was an easy hill! 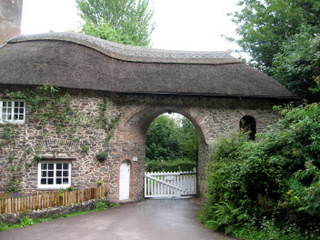 A rain-shower soaked the road, as after the top it continued climbing gently towards Porlock, where we took the old (and rough) toll road down to Worthy, where it passes through the arch of the old toll house.  The descent was so long and steep I was getting spasms in my hands from keeping the brakes on so long!  Porlock village is very pretty, and was the last proper village on the route before we arrived at Minehead, where I could finally have a rest.
Two easier days of 40 miles each to follow, to give my legs some respite and get ready for the foray into Wales, which we could see across the Bristol Channel for part of today.
You might think I would be getting ‘demob-happy’ with less than two weeks to go now – but I think I’m beginning to feel like a racing driver who’s in the lead on the last lap – worrying about what might go wrong to spoil the result.  I find myself concentrating harder, taking more care than ever – but I suppose that’s not a bad thing.
PS Thanks to Richard’s wife Steph for making the sponge cake which was so delicious, despite the fact that she said we should have eaten it before the weekend was over. But at the moment, thanks to so many well-wishers, we seem to have more cake than the Test Match Cricket Commentators. It’s delicious but it’s taking some eating, I can tell you! KPO.
Posted by Bill Honeywell at 21:00