75 miles; total 3,297 miles
A spectacular day, with views and villages to die for – but at a cost – 7,000 ft of climbing!  And a surprise meeting with an old friend from Lancashire. 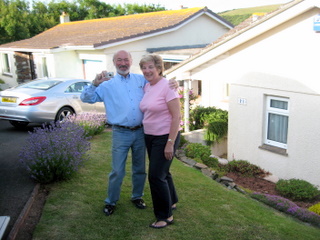 Roger and Dianne
Last night’s luxurious stay with Roger and Dianne Lewis was very much appreciated, but this morning it was back to business as usual with an early morning start along the narrow Devon lanes to the small town of Modbury.  A young lady jogger appeared out of a side street and then overtook me on the steep climb out of the village, which seemed a bit embarrassing at first, but as she turned off near the top she stopped, holding her sides, as soon as she thought she was out of sight! 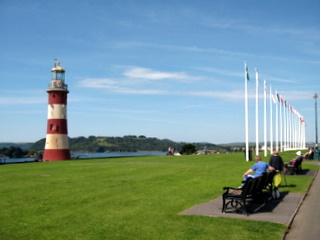 It didn’t take long to get to Plymouth where we had a stop on a Morrison’s car park, after which I visited The Hoe and then found the Cremyll Ferry, an 85-year old vessel which still makes the crossing every half hour with up to 157 passengers. Today, most of them were Spanish schoolchildren from Madrid.  I had a chat with one or two but my Spanish must not have been too good as they didn’t seem to want to say much.  Perhaps they just thought I was too old to talk to! 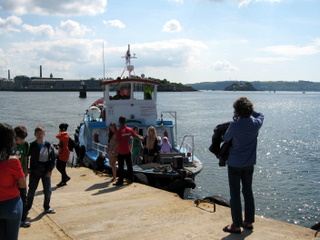 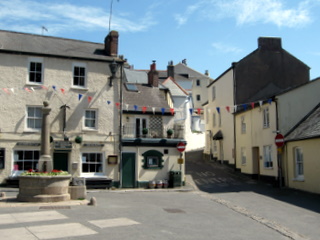 When I got off the ferry I was in Cornwall! After a short climb I was on the south coast again, on the spectacular Whitsand Bay – superb views from the road high above the sea, with fantastic scenery which doesn’t seem to suffer too much from the large number of old, shabby-looking holiday homes. 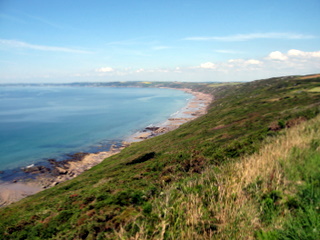 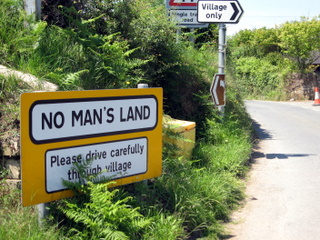 The now familiar pattern was beginning again - a long drop down to a seaside town or village followed by a long climb up again. In Downderry I was passed by 50 or 60 cyclists going the other way, all in matching kit.  When I got to Looe, the van was there with new crew – Ian Hardy and Richard Dugdale.  Val and Alan had already set off (not even a goodbye kiss – from Val, I mean) and were to make it back home by 6.30 this evening after a trouble-free run. 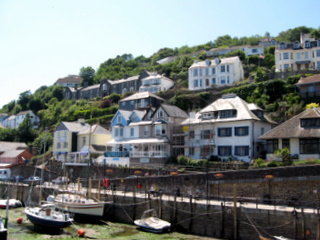 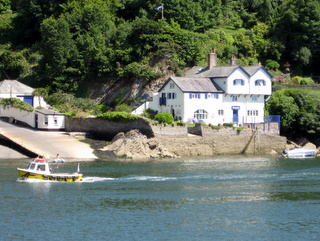 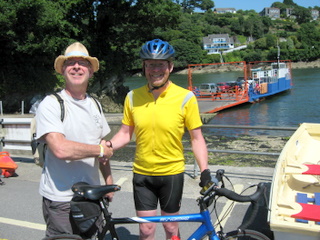 
More narrow lanes to the car ferry from Bodinnick to Fowey.  Daphne du Maurier used to live at Bodinnick (that’s her house in the picture).  A figure on the jetty at Fowey was waving – I presumed at someone else on the ferry – but when I got off I saw it was my old pal Peter Cocker – I had no idea he was coming to meet me, but he said he was having a few days holiday, visiting the Eden Project, and thought he’d come and say hello. Absolutely excellent!
Par remains quite industrial, with the china clay industry, and just after, I made a little detour to have a look at the picturesque Charlestown, location for many a sea-faring film or TV series. 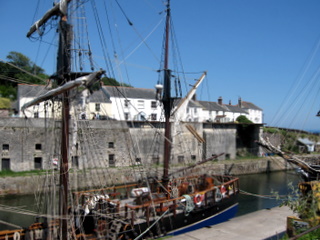 There remained 10 or 12 miles to the caravan site at Boswinger, south of Mevagissey: not far off the hilliest 12 miles of the whole journey!  What a rollercoaster!  Through Pentewan, Mevagissey, Port Mellon, Gorran Haven and finally the beach at Penare, the road dropped precipitously each time only to rise on the other side even more steeply each time.  Climbing Foxholes Lane out of Gorran Haven I thought my lungs would burst!  But by way of compensation each village was so pretty, and the scenery in between so spectacular, that it was well worth it.

At last the agony and the ecstacy were over - with a promise of more to come tomorrow before I get to Helston, via Britain’s most southerly point, the Lizard. (And the day after, I turn the corner at Land’s End and start heading for home – Whahay!)
Donations keep coming in, I’m glad to say, but there’s lots of room for more – please do your bit for Cancer Research by following the links at the top of this page!
Posted by Bill Honeywell at 20:33