After a few days of perfect cycling weather – warm, dry and sunny with light winds – I was reminded this morning that the British climate is, if nothing else, fickle. I’d been woken by the rain once or twice during the night and at 6.30 it was pouring down. But just before the 8.00 start time a bit of blue sky appeared in the west, so hopes were high, although as a precaution I took the spare bike – the one with mudguards. 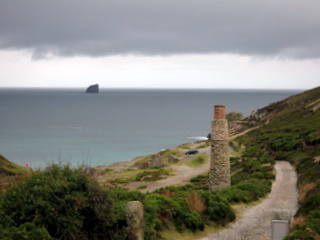 The St Agnes area has many signs of its tin-mining past. A narrow lane took me, via a 1-in-3 descent (a little pick-up was struggling to get up the hill), to an area of derelict buildings and chimneys which appears little visited.  I love the stone walls in this part of the world too, with their herringbone pattern, totally unlike anything in the North of England: 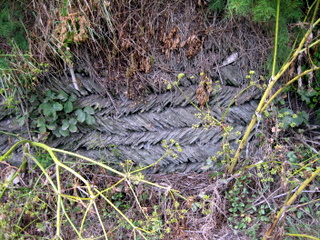 Perranporth appeared to be like so many other seaside towns; on the way out, up the hill past the golf course, it started to rain – heavy, and very wetting! Although I managed to put on my waterproof top, I was soon soaked from the waist down and actually wanted the route to keep going uphill – it was one way to stay warm, because on the descents it was pretty cold! 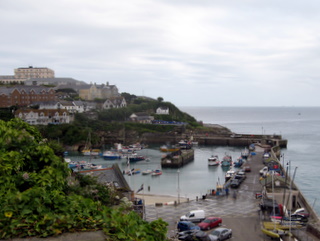 I’ve never been to Newquay before, and apart from the old harbour I don’t think I’ve missed much. I was surprised how much like other brash resorts it was, when perhaps I was expecting something more genteel. At least the weather started to improve as I left, and soon I arrived at the van for coffee and cakes, where Richard was itching to get cycling again. 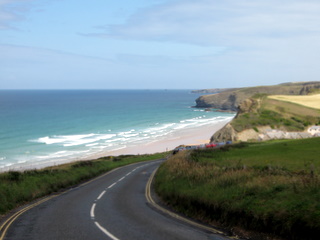 On the map, the next section looks very much like yesterday’s from Sennan to St Ives, but it turns out to be much softer, more arable, but still with spectacular views of the rugged coast itself. The roller-coaster continued, with plenty of ups and downs before we arrived at Padstow – a much prettier town, well-known for one particular restaurateur of course, but with lots of character in other ways. 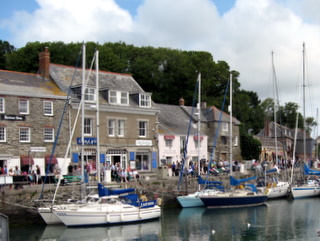 A disused railway line provides an excellent off-road link to Wadebridge – the Camel Trail – although it is extremely busy with cyclists, most of whom seem to have hired their bikes from the shops at either end. We turned left in Wadebridge and eventually arrived at the village of Rock, a mile or so across the estuary from Padstow as the seagull flies, but a journey of around ten miles for us! 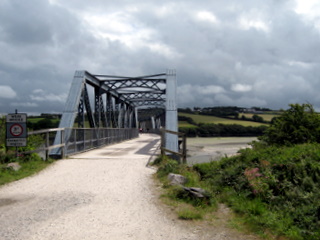 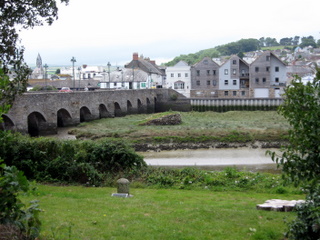 Now we were into serious ups and downs – with Polzeath, Port Quin and finally Port Isaac giving our lungs something to burst for. The last one, Port Isaac, is a stunningly beautiful harbour town, made famous by the TV series Doc Martin, where it is of course ‘Port Wen’. One of my favourite programmes – possibly because there are lots of times one would like to be as rude as Dr Ellingham! 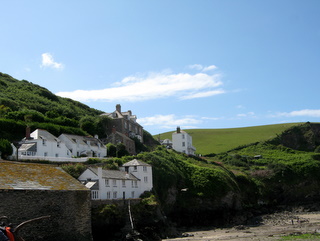 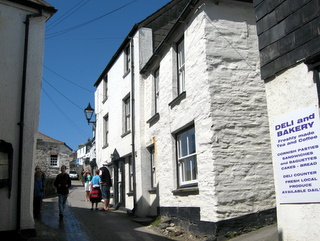 Finally through Delabole, whose quarry is the largest man-made hole in Britain, to Tintagel, where we are staying the night. The wind’s got up and the forecast looks a bit breezy for the next few days – I just hope it stays in the rear where it can give me a push up the hills. This run of six days is probably the hardest sequence since the first ten days, and with another two to go, there’s plenty of blood, sweat and tears to come yet!
Posted by Bill Honeywell at 21:10