69 miles; total 3,961 miles (470 miles to go!)
Rested, relaxed, refuelled, revitalised, ready and raring to go! That was me this morning despite the wet weather overnight. A proper day’s cycling to come, with some hills thrown in for good measure.
Yesterday afternoon I could hear, not too far away and for at least half an hour, a racing motorbike being ridden very quickly. The mystery was solved soon after I set off when I saw a sign to the Pembrey Motorsports Centre, which obviously includes a racetrack.  Much of the land near the Country Park is left uncultivated and in an area of long grass and meadowsweet, a Grasshopper Warbler was singing. It sounds a bit like an old fishing reel and is perhaps the most boring bird song there is but Grasshopper Warblers are quite uncommon, and Mrs Grasshopper Warbler must presumably like the song. 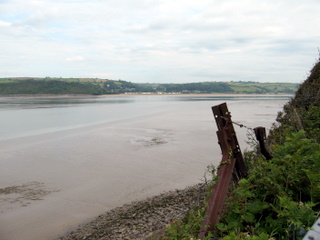 There is a big estuary here, with three arms of not quite equal size – the Gwendraeth, the Tywi and the Taf, stretching inland to Kidwelly, Carmarthen and St Clears respectively.  My route followed each arm in and out as far as practicable.  From Kidwelly to Carmarthen was the flattest section but some of the roads were the dirtiest I’ve been on. It’s a bit disconcerting wiping cow muck off the drink bottle before having a slurp! 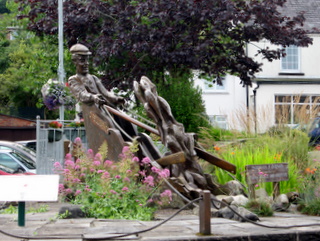 Ferryside (where presumably there once was a ferry across the Tywi to Llansteffan) has a school and railway station, a derelict ‘educational centre’ and an interesting sculpture. It’s quite nice actually. 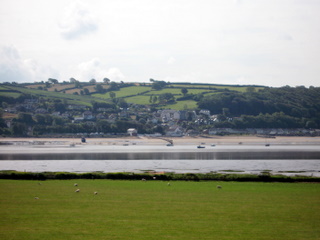 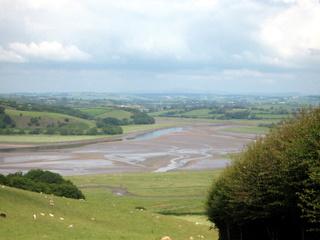 I skirted around Carmarthen, then returned down the other side of the Tywi to Llansteffan to gaze across at Ferryside where I’d been over an hour before (eminding me of Delfziel and Emsden – I think – on the North Sea Cycle Route except in their case it’s a full day!).  Then it became a lot hillier as the route followed the side of the Taf to St Clears – including one very steep little blighter! 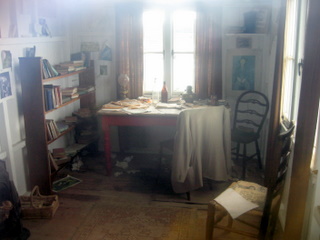 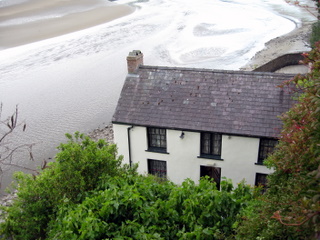 Laugharne (I’ve no idea how to pronounce it) was the home of that most famous of Welsh poets, Dylan Thomas. I went to have a look at his Boat House and study (a wooden garage), both of which had stunning views of the estuary.  Laugharne has quite a big old castle too.  But they charge 20p for the public conveniences, and I didn’t have a 20p, so I… well, use your imagination! 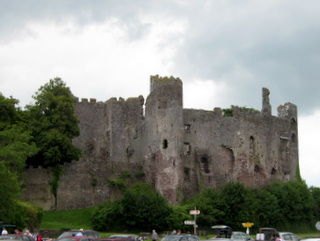 At Pendine, where there is an MOD establishment and a Museum of Speed (the sands here are long and flat, and were used for the World Land Speed Record for some time), the road took a steep turn upwards into a very heavy shower.  For the second time on this ride, I was stopped by a farmer moving cattle along the road. He told me how they were bothered by tuberculosis now and again which meant that they had to kill lots of stock, getting only animal food prices for them. Most farmers seem very friendly – providing you don’t leave gates open or drop things that could be eaten by their stock. 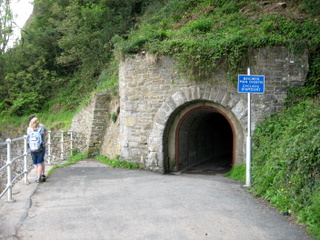 It was cloudy and cool, and at the beach resort of Amroth there were a few people sitting in cars looking out to sea with flask and a miserable expression. The road went steeply up and down between Amroth, Wiseman’s Bridge and Saundersfoot, but I managed to work a flanker when I spotted a cycle path which even went through a long dark tunnel. 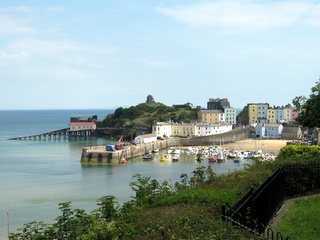 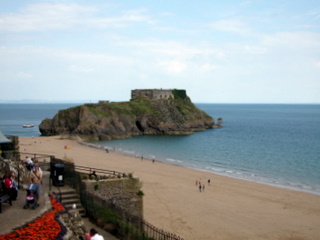 It may not be the school holidays yet but there were plenty of holiday makers in Saundersfoot and Tenby. Tenby is really nice, with a walled town, lots of lovely buildings, views,  beaches – the lot – I was most impressed. I even stopped at a bike shop to buy some handlebar end stops. 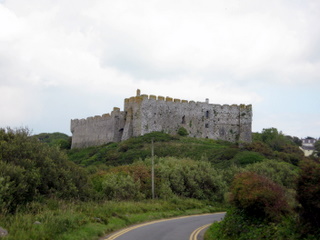 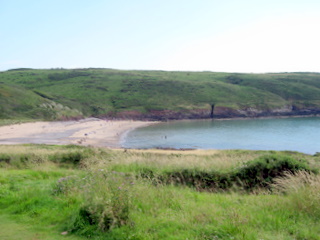 Manorbier has a castle, a popular beach – and more steep hills. After that, just a few country lanes to tonight’s stop of Freshwater East, but on the way, at a narrow point of the road, I had to negotiate my way through masses of big bits of wing mirrors.  A mile later, a motorhome had pulled into the side, sans wing mirror. I thought of suggesting to the driver that he go back and clear the mess up but I got the feeling he wouldn’t be too receptive to such a suggestion at this time…
For the fifth time since Frank and Bern took over on Saturday we’re eating al fresco.  I hope the weather keeps up: I’ve a similar day tomorrow around Pembrokeshire, finishing at St Davids, and when I think about it, for the last few weeks I’ve been doing three big zig-zags – along the south coast to Land’s End, back along the north coast of Cornwall, Devon and Somerset, then back again along the south Wales coast. But on Friday the route turns north and makes big steps towards home. KPO then…
Posted by Bill Honeywell at 19:44