A Resumé For New Readers (and some more information for everybody)

I meant to post this a few days ago, but had no wi-fi signal and then forgot I’d written it!  Now the ride is over, it still seems appropriate if you just substitute with the past tense where appropriate! ---
I realise many people will have found this blog some time after I started this bike ride on 10 May (I think that was this year but it seems so long ago now, I’m not sure!)  So perhaps it would be a good idea to let you know a few things and let you know some of the events so far.
First of all, this is a 4,400-odd bike ride around the coast of Great Britain which I am doing in an attempt to raise £20,000 for Cancer Research UK. I’ve had cancer twice, and nearly everyone has a cancer story to tell, if not of themselves, then of someone very close to them.
I’m going clockwise from Clitheroe in Lancashire, so I started off up the Fylde Coast, then Cumbria, Scotland… and so on.  I’m doing the ride in one go – no breaks – with one exception, which was that I had to nip back from Oban to Clitheroe to attend the wedding of my nephew Chris and Nic after ten days. Since 24 May I haven’t had a day off.
The weather on the first day was fine. After that it rained at some time every day (and often all day) for weeks and weeks, and a times the wind was so strong it was impossible to stay on the bike. This culminated, on 24 May, when gusts in nearby Loch Aline reached 90 knots (100 mph) with a large oak tree being blown over on top of the motorhome whilst we were all inside. That was a worrying moment, I can tell you, and how the motorhome survived with nothing worse than a broken windscreen and a few dents I’ll never know. 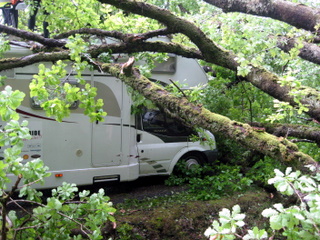 I’ve had a few companion cyclists, but most of the riding has been alone.  Accommodation, and brew/food stops, are provided by a motorhome which has been crewed by different volunteers who have come out to do a week’s stint at a time.  Except on one occasion, when the lovely Margaret Rose put us up in her house near Colchester, fed us heartily and provided us with enough food for the next week!
I’m due to finish next Wednesday 20 July.  The amount raised for Cancer Research UK stands at around £12,000 (now over £16,000!!), including over £300 from 11-year old Ella Spencer who organised a cake stall at her home a couple of weeks ago.  So more donations are desperately needed – especially as I’ve promised not to shave my beard off until the target is reached – and Valerie, my wife, hates the beard!
I’m using Twitter to keep people up-to-date of progress – you can find me there as @CancerBikeMan, and you can also find me on Facebook.
You can donate in different ways: by going to my JustGiving site at
http://www.justgiving.com/Bill-Honeywell
or, if you want to donate £5 (or multiples thereof) you can text
CRBC99 £5      to 70070 on your mobile phone
Please give generously – you know it’s in a very good cause!
Posted by Bill Honeywell at 21:57