75 miles – total 4,106 miles
A hard day – an average mileage, but the total ascent of 2,227 metres (7,306’) is equivalent to climbing Snowdon more than twice.  Hence your scribe is feeling a little jaded tonight!
I think I may have mentioned that last night at St David’s, by a complete coincidence, we were parked next to a couple from Clitheroe, and we had a visit from Peter Worden, a Clitheronian who now lives in St David’s. I’d gone to bed, when Frank and Bern returned from their ablutions with two visitors – they’d bumped into friends (from Clitheroe) John and Lynn Beggs, who had arrived the same day for a short break. What would be the odds on that?
I think it’s safe to say I was away before John and Lynn woke up. Having seen the weather forecast I thought it best to get an early start, as I knew that today would be a long hard slog.  In my hurry I left the tracker in the motorhome, so if you thought I was making good progress, ‘twas not so! 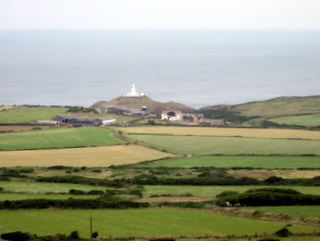 The lighthouse at Strumble Head
Having said that, the first few miles were easy and flat, but then around Strumble Head the hills started to make their presence felt.  Now in 1966, I stayed at the Pwll Deri Youth Hostel for a week on an organised summer holiday. Avid readers will be able to work out that I was but a young slip of a lad at this time: I travelled there on the day of the World Cup Final which will be forever etched in every Englishman’s memory – father was kind enough to drive me to Crewe, and then I changed at Shrewsbury, Cardiff, and Fishguard.  Two things stand out in my memory – leaning over the edge of a cliff, being buoyed up by the gale force wind (good job the wind didn’t drop for a few seconds!) and (the shame of it) on the last day, locking all the youth hostel toilet doors from the inside and climbing out over the top – I always did (do) get up to mischief!! 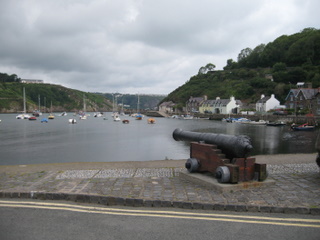 Fishguard Harbour
After a long descent to Goodwick, Fishguard has an attractive port area – it was the scene of the last invasion of Britain, when some of Napoleon’s troops staged a half-hearted attack which got nowhere.
The van was waiting at the top of the hill and it was starting to rain, so I recovered the tracker and donned waterproofs for the next leg through Newport and the delightful Moylgrove (it really is like a grove!).  The hills just went on and on but eventually I got to St Dogmaels near Cardigan (Aberteifi) for another break. 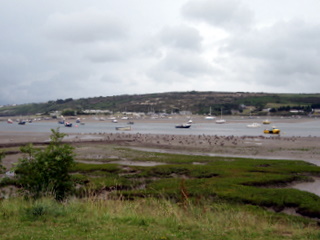 Actually the rain wasn’t too bad – the trouble was, if I took off my waterproofs it rained, and when I put them on the sun came out. Better too warm than wet and cold, so the clothes stayed on.
Another hilly section followed, this time to Aberporth, and along here I heard a Quail calling from a barley field. Quail are small game birds, like a starling-sized partridge – hardly worth eating I would have thought – but  they fly all the way from Africa in Spring and are very secretive. But if you hear a bubbly call that sounds a bit like ‘Kiss-Me-Quick’ then you know you’ve found a Quail, even though you’ve hardly any hope of seeing it. 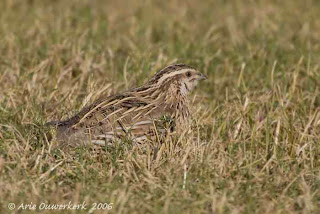 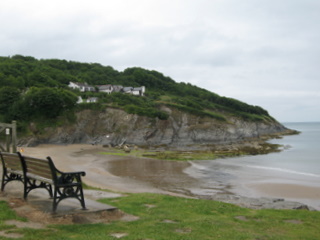 Aberporth
The fearsome roller-coaster that is the West Wales Coast continued – nearly all the time was spent toiling uphill of course – and I was glad I’d factored in a third re-fuelling stop near the lovely seaside village of Llangrannog.  I can’t believe how much I’m eating, and I’m not putting any weight on – I wonder where it’s all going?! 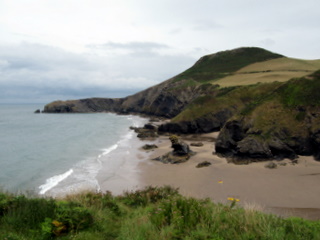 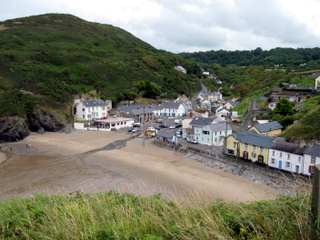 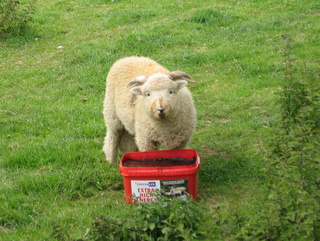 There's got to be a sheep photo somewhere...
New Quay was just about by-passed, on the way to Aberaeron, whose houses are painted lots of different colours – it’s not Tobermory, but it’s OK.
So. Tomorrow is the last change-over day:  Frank and Bern are going home to be replaced by my long suffering darling wife Val, plus brother-in-law Alan and, for this time only, my daughter Catherine, who has decided she ought to get in on the action (she’s most welcome!)
Frank and Bern have been great company, and because of the way they both go to the caravan site loos at the same time (even in the middle of the night), they win the prize for the most romantic couple of the trip.  Mind you, it was a near thing, with Simon and Tony coming very close (only kidding guys!! :-)))
So, one of the hardest days done, in the bag.  Tomorrow is a rest day (22 miles and the changeover), then the mileages are 62, 78, 93 and 77.  But none of the days that are left have anything like as much climbing, so I’m hopeful that I’ll get back home in one piece next Wednesday…
Please don't forget you can donate to Cancer Research UK by going to www.justgiving.com/Bill-Honeywell or you can donate £5 (or multiples of) by texting 'CRBC99 £5' to 70070 - please help cancer research by giving generously. Thank you!
Posted by Bill Honeywell at 21:13