Day 69 and the very last day! Thurstaston to Clitheroe

83 miles; the final grand total: 4,440 miles
From underwhelmed to overwhelmed! – Ferry across the Mersey – Surprise company – We go squirrel hunting and almost regret it – An incredible homecoming reception - Can I cope with all the media?
I’m sitting in my living room for the first time in over ten weeks. Earlier, after I arrived home, I had a shower and for a while couldn’t remember where I kept my socks.  That’s when it dawned upon me how long I’d been away – longer than I’ve ever been away from home in my entire life.
Although it’s a nice feeling, it really is a little difficult to come to terms with at first, but I’m getting so many emails and tweets which are a welcome distraction from having to get back to reality. I feel good, really.
As I was getting ready this morning I was a little surprised that it didn’t feel any different from all the others: I really expected that it would have done. Although I knew it was the last day, I’m not sure that I felt it was the last day. 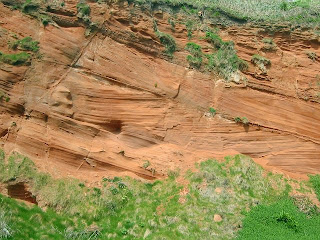 I love the red sandstone that outcrops all over the place on the Wirral (often at the base of stone walls). It was formed in the Permian Period, 250 – 300 million years ago, and the strata show so clearly that the rock is basically solidified desert sand dunes. 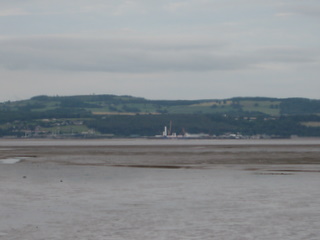 The view from West Kirby - you can just see the oil rig that I passed yesterday at Mostyn in Wales.
West Kirby, Hoylake, Wallasey, New Brighton – all easy going and level, taking me around the peninsula’s perimeter to Birkenhead. At the Seacombe terminal for the Mersey Ferry I asked a uniformed gentleman if I was at the right ferry and how I should go about getting a ticket. He turned out to be a bus driver – but he was still very helpful! 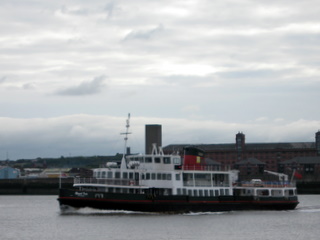 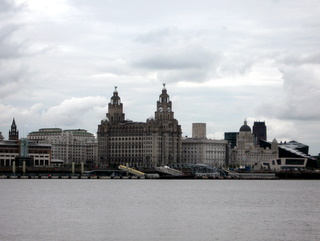 Once off the ferry I did a telephone interview for Radio Lancashire and then set off on busy roads north towards Crosby.  When I got to Seaforth, three familiar cyclists were gesticulating at the side of the road – Richard Dugdale, Mick Bryan and Big Al Taylor, who had come to ride the final 60 miles back to Clitheroe with me. I had half-expected they would!
I thought we had a lot of time and would arrive much back in Clitheroe much earlier than the four o’clock which I had estimated and told everyone.  So when we got to Formby we went on a diversion to Formby Point in the hope of seeing some Red Squirrels. None were seen, though there were hundreds of tiny schoolchildren. Al said it was more like Disneyland than a nature reserve. 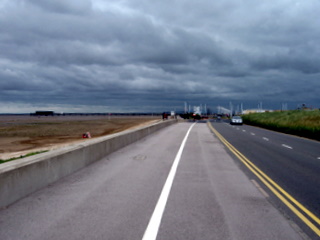 Marine Drive, Southport
As we got to the very long road that is Southport’s Marine Drive I started to feel that we’d spent too much time on our squirrel hunt and we needed to press on.  The tide was out, meaning that the sea was nowhere to be seen, but we could see Blackpool across the Ribble Estuary.  The Ribble flows past Clitheroe, so I was really feeling near home now! 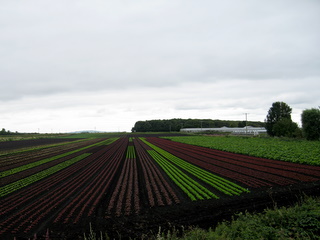 The soil in this area is incredibly black and fertile, and some of the crops are really quite picturesque.
As I arrived in Preston, I ‘closed the loop’ – having crossed the point where I had been ten weeks ago – and, I suppose, officially completed my circumnavigation of the coast. Soon after, Geoff Isherwood was waiting at the side of the road opposite his office, and fixed a big ‘Congratulations’ balloon to the back of my bike, whilst looked upon from on high by all the staff at Forbes Solicitors!
We were joined by Mick Wood, who rode on Day One, together with another two cyclists from Clitheroe Bike Club, and by 3.30 we were only two miles from Clitheroe. Thinking that some people might not be at Castlegate yet, there followed a rather surreal 20 minutes’ wait before we set off again into the town.
As we headed up Moor Lane, the other riders held up the traffic behind to let me go ahead, to be hailed by the bell of the Town Crier, Roland Hailwood, and scores and scores of friends. What a fabulous moment!  After breaking the finishing tape I made a short speech, relieved that this time, unlike the end of the 214 Wainwrights, I managed to hold it together without getting too emotional!  Then there were interviews with Granada Reports, East Lancs News and Sean MacGinty on Radio Lancashire before I could get on with the serious job of meeting and greeting all the people who had helped, donated, and just generally supported the ride. 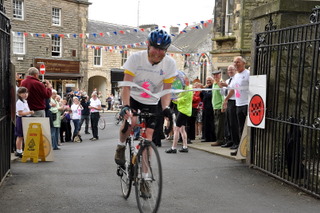 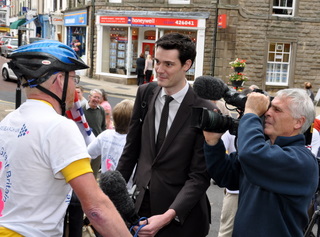 Being interviewed by Ben from Granada Reports (nice view of the office in the background!)... 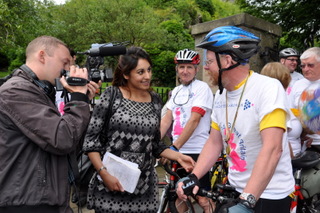 ...and then Faiza from East Lancs News 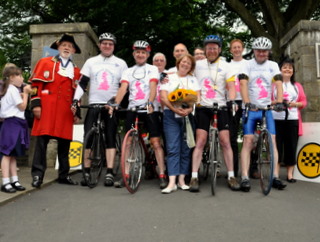 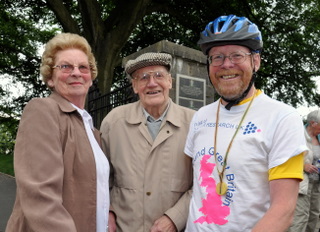 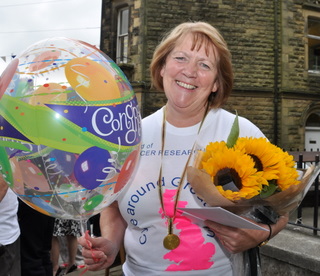 "You're SO in trouble if you don't shave off that beard!!!"
And after it had all died down… I cycled the two miles back to my village of West Bradford to start the long painful process of my rehabilitation… (!)
There is a lot more to say, but not tonight.  I’ll be trying to get things straight tomorrow, catching up with urgent jobs, but I’ll also hopefully find time to provide you with a few more thoughts, insights, reminiscences - and acknowledgements of all the help I’ve had on the ride.  And there may be a few words from a very famous hero of mine…
Posted by Bill Honeywell at 21:00