Today’s challenge was to get to Lake Village before 3.30 pm – as you’ll recall, we couldn’t cycle to tonight’s destination, the Old Faithful Inn, because roadworks had taken out a bridge on the Grant – Old Faithful section of the Grand Loop Road at De Lacy Creek.  Richard had got so frustrated the afternoon before while trying to solve the problem.  He persuaded the man in the visitor centre to ring the authorities to find out whether it would be possible for cyclists to get through (in the UK it’s usually a safe bet to ignore any ‘Road Closed’ signs because in 99% of cases there’s room to pass) – but came up against ‘Mr Negative’.  Instead of asking whether we could get through we heard him say “Hey, the road’s closed, it won’t be possible for cyclists to get through, will it?”, which got Richard really annoyed.  Mr Negative continued in this vein as I came up with suggestions for buses – “That firm doesn’t  come this far north”;  “They won’t have a permit for the Park”; and “I wouldn’t even consider cycling in the Park, there aren’t shoulders like there are in Grand Teton”.  Yeah, really helpful! 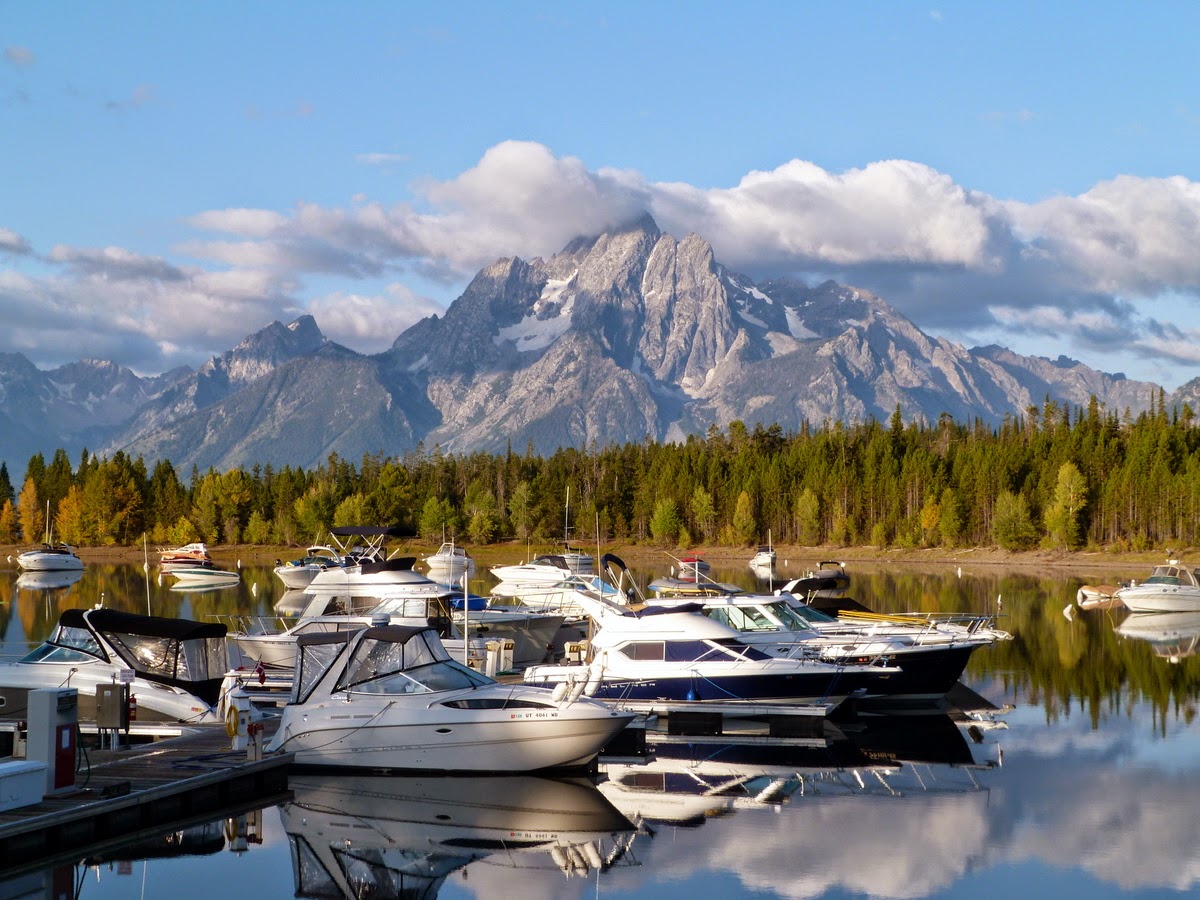 Anyway, we had our target – Lake Village – and so after an early breakfast and a dash to the lake (Jackson Lake) to get a photo, we called at the general store for lunch provisions.  I need to explain again:  this part of the world is nothing like Europe, where on a cycle tour you need to follow a route through lots and lots of junctions and you have a great choice of cafes to stop at whenever you need sustenance.  Today’s route would have ONE junction and perhaps the chance to find something to eat at Grant Village or at the end, but with places already beginning to close down for the end of the short summer season, you couldn’t guarantee anywhere would be open.  So on the basis of Better Safe Than Sorry, it’s advisable to keep a stock of food with you.  Cars won’t go without fuel, and cyclists are just the same.  Different kind of fuel, that’s all. 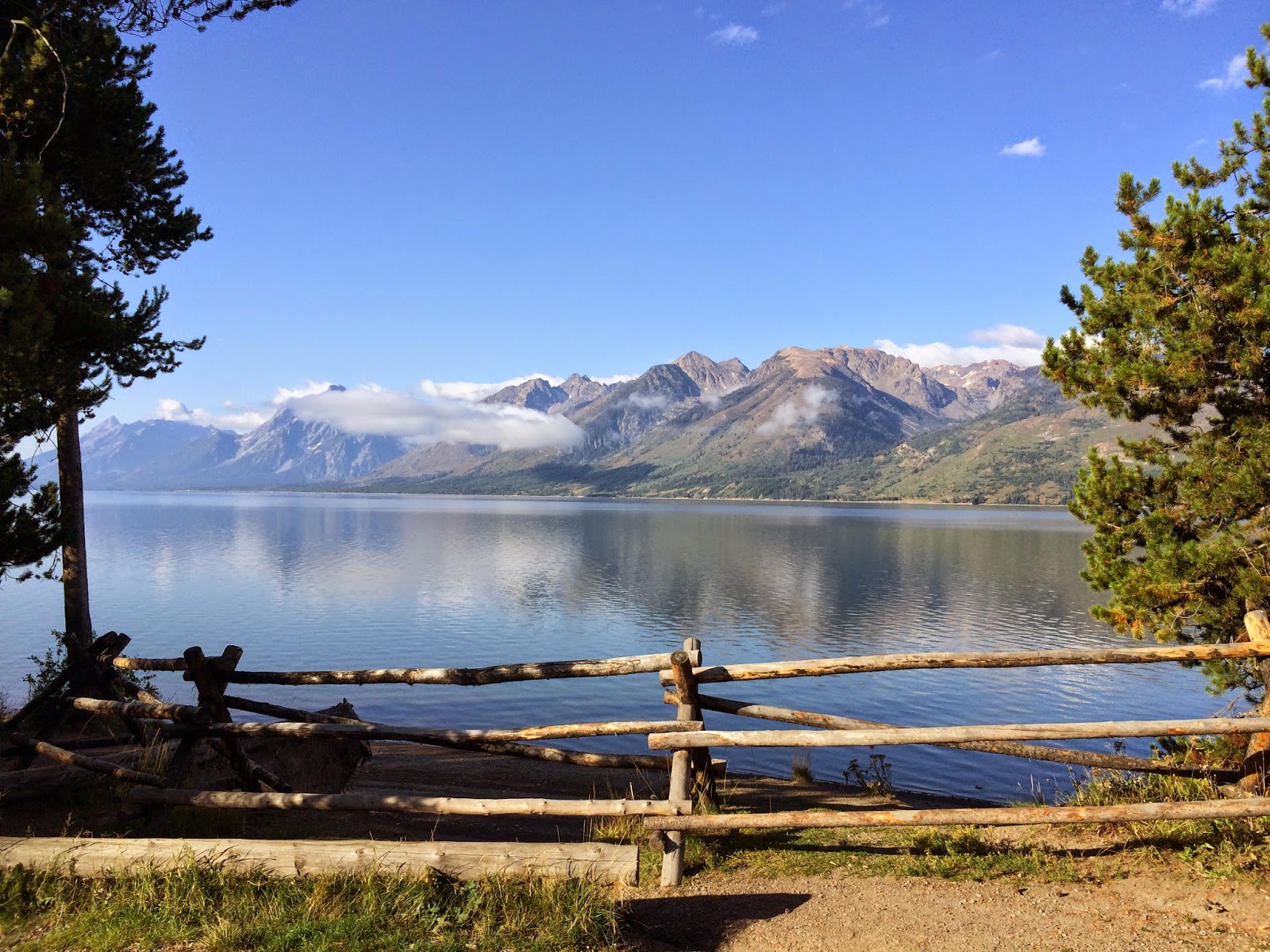 We stayed close to the shore of Jackson Lake as we pedalled north, easy-going, with the sides of the road pine-clad as they would be for much of the day.  The sky was blue, the sun was rising and warming things gently.  We pulled into a ‘turnout’ for a better view of the lake.  As with many such places, there was a restroom, which is US-speak for a toilet.  Those in the Yellowstone area look like small cabins and can be identified by a tall chimney, the purpose of which is presumably to dissipate the, er, aromas, as they are basically earth closets with no water supply.  But what earth closets!  Inside there is a toilet seat of a sort, positioned over the deepest hole full of *$!?*% you can imagine.  You could suffer from vertigo whilst going for a call of nature here.  I kept wondering how they could possibly empty them out, or whether everything just rots down and soaks away over the winter season.  Things like this exercise your mind whilst you’re pedalling, and make a nice change from those tunes that become ‘ear-worms’. 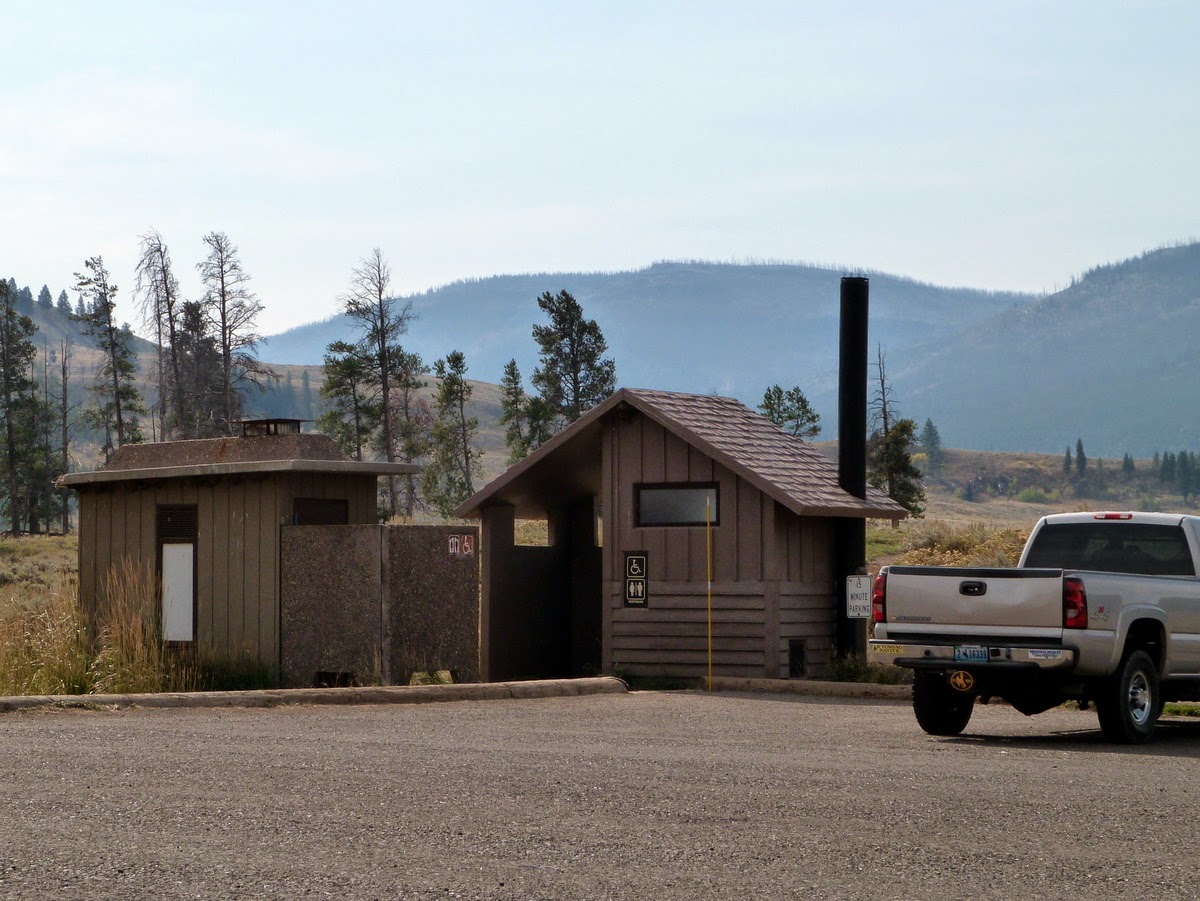 Now we left Grand Teton National Park, and entered the section between Grand Teton and Yellowstone called the John D Rockefeller Memorial Parkway, some 20,000 acres donated to the state by the famous philanthropist to protect the area between the two National Parks.  A long climb ensued, then a descent to the Snake River and the South Entrance to Yellowstone Park where, to our amazement, we were shouted at by a man in a car who couldn’t believe we were from Clitheroe (we were wearing the same shirts again!).  He turned out to be Terry Plant, from Bolton-by-Bowland, about six miles from Clitheroe and a mile from where Richard was born!  Terry and his wife were on holiday, so we had a brief chat until the following traffic began to get impatient. 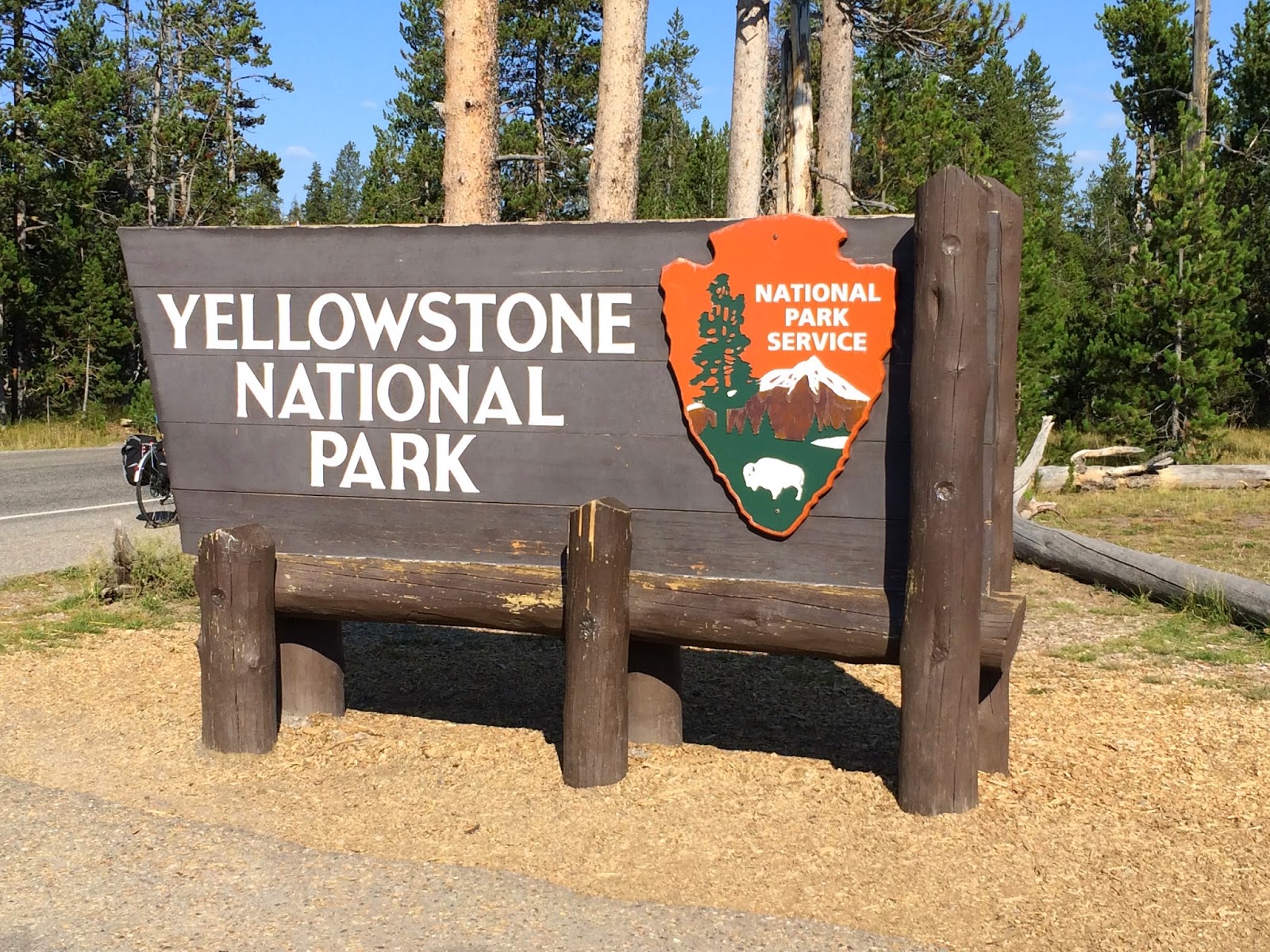 Through the South Entrance and here we were – Yellowstone National Park – in glorious sunshine. 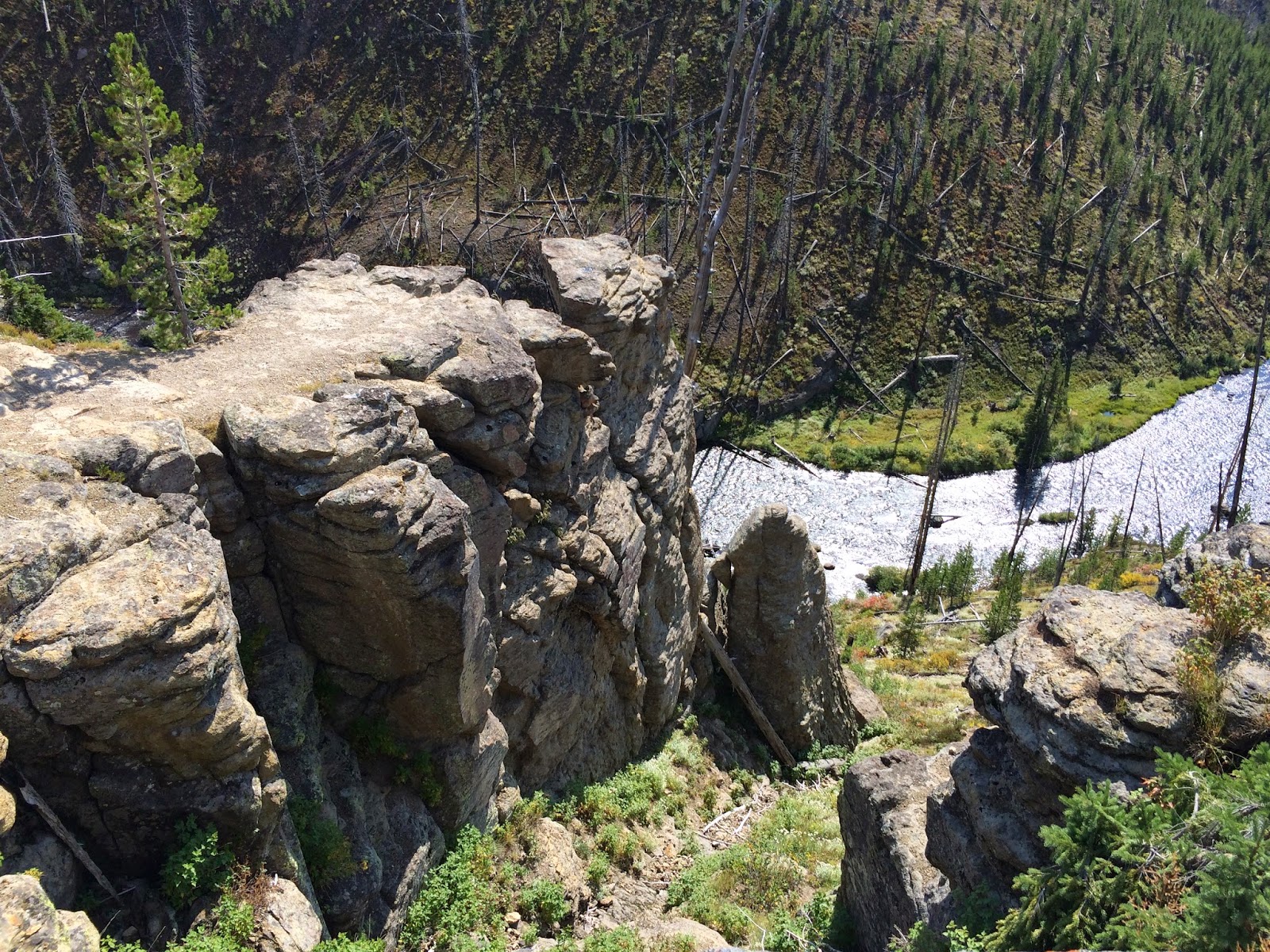 A long, steady climb followed, past a spectacular ravine on the right, then to a flatter riverside area where some of the group spotted Sandhill Cranes, though I missed them (we rarely cycled as a coherent group, so the twelve of us could be spread out over several miles at any one time).  Lewis Falls looked spectacular, particularly to one gentleman who could be seen walking along logs in the river to get a better view, which seemed rather foolhardy! 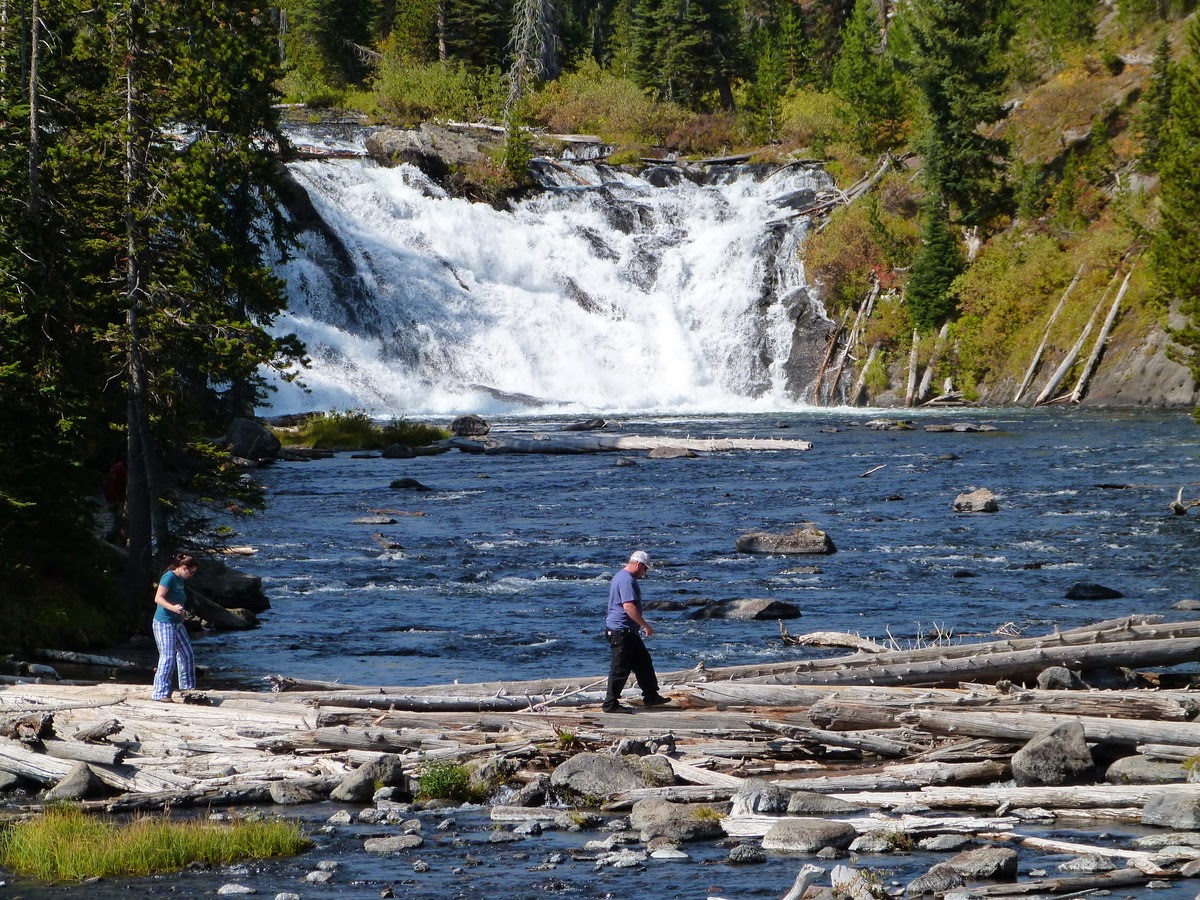 The climb continued, past Lewis Lake, finally reaching the Continental Divide at 7,988’ (2,435 m) above sea level.  Rain on one side eventually drains to the Atlantic, rain on the other side to the Pacific. 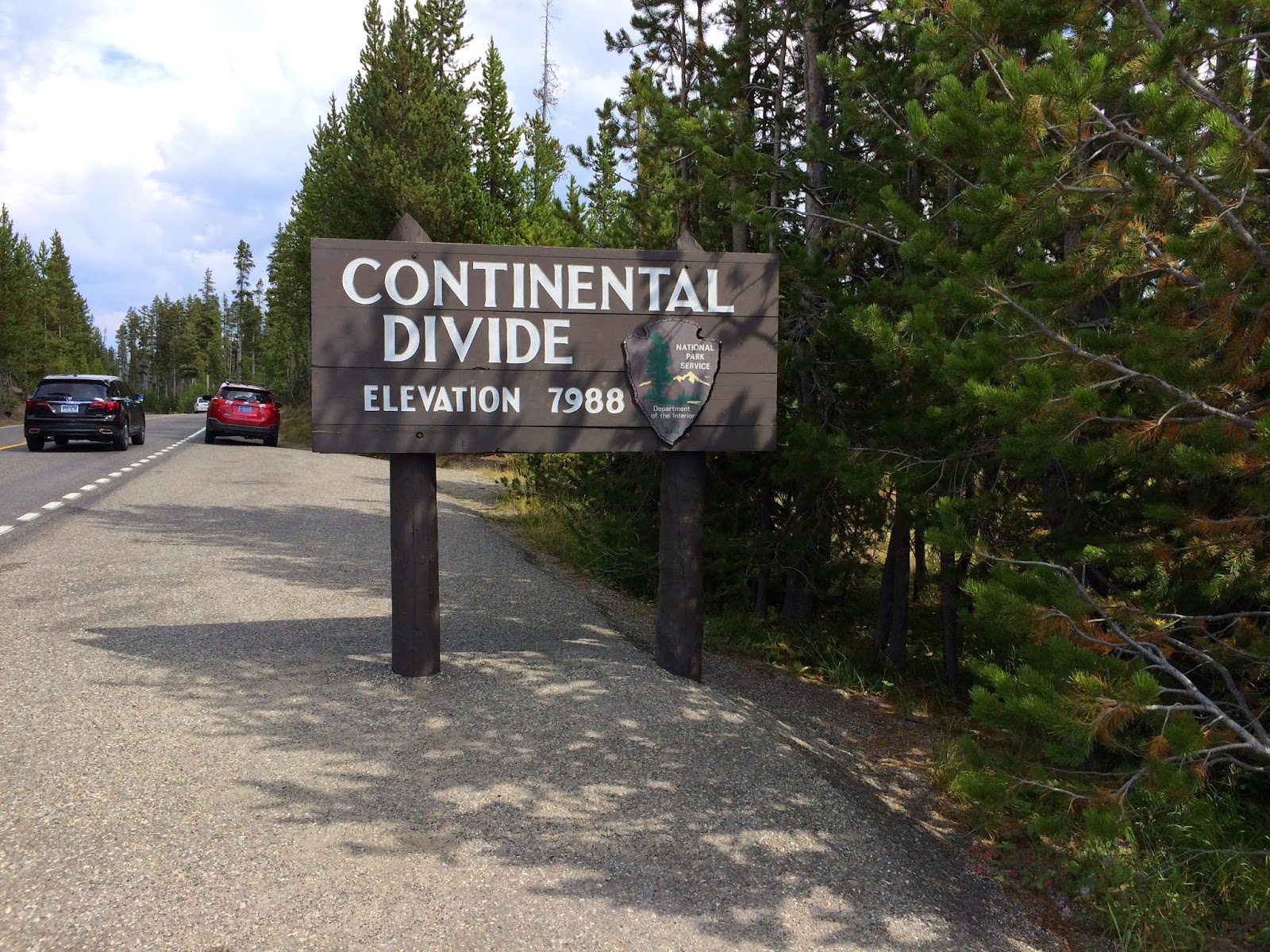 Time was pressing, so I decided not to bother turning off to look at Grant Village, but carried on to West Thumb, on the shore of Yellowstone Lake, to encounter the first ‘Geyser Basin’ (it’s pronounced Guy – Zer, by the way). 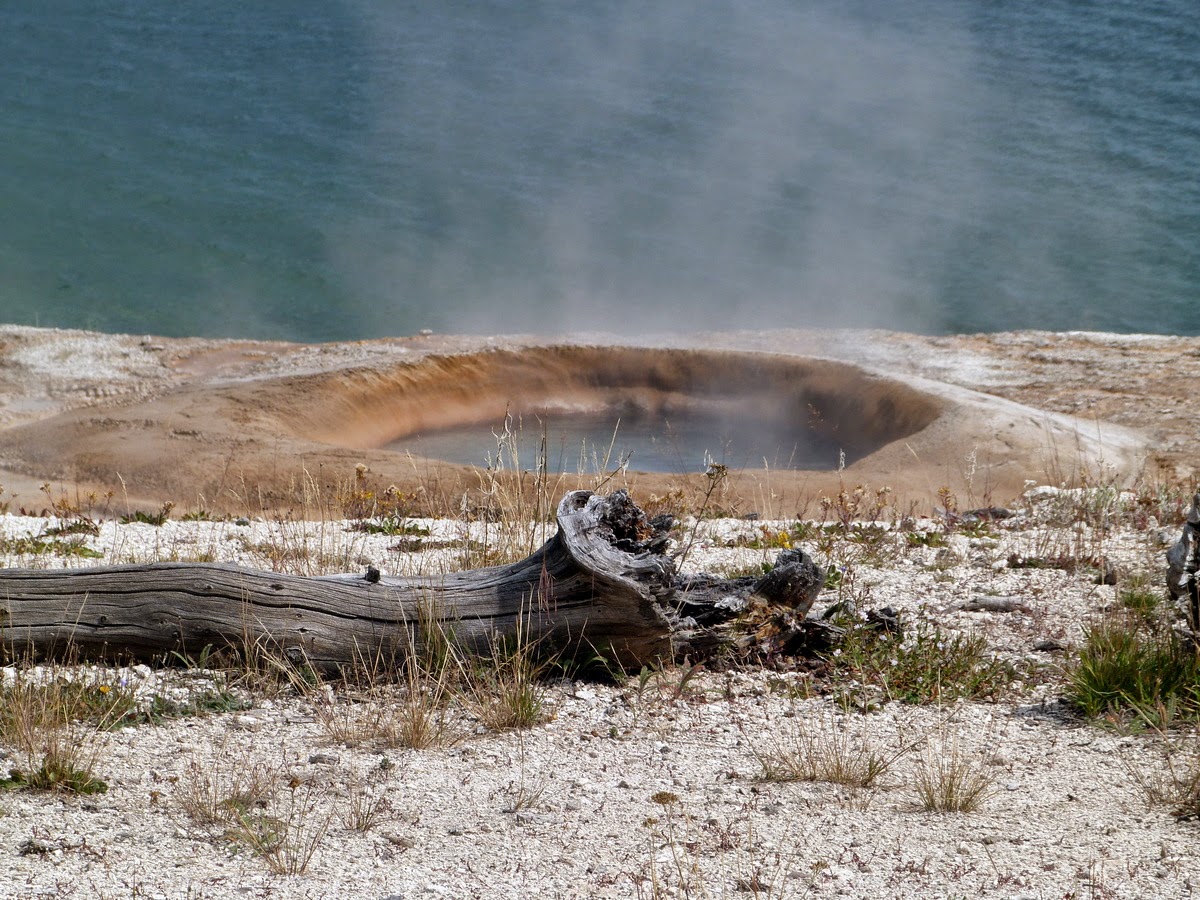 I stopped by the roadside close to the lake to eat my turkey sandwich, a few yards from a small, steaming crater with a slight whiff of sulphur.  One of the world’s largest alpine lakes, Yellowstone Lake was formed by a caldera collapse, and then further shaped by glaciers and other volcanic activity.  There are lots of thermal vents on the lake floor, resulting in ‘warm patches’ and it was once apparently possible to hook a trout, then reel it in over a hot spring and have it cooked by the time you landed it!  I bet you never heard that on QI, but then I don’t think they’ve reached the letter ‘Y’ yet.

21 miles to go.  Despite running along the lake side, the road was quite undulating, and now I spotted a big black cloud and heavy rain ahead.  Very soon I was caught in a fierce hailstorm, with hailstones almost the size of marbles, and the temperature dropped through the floor.  I caught Jeff at this point and we found shelter in the portico of a well-placed restroom.  Also taking shelter here was a family from Billinge, north-east of the park, who cheered us up with a dire weather forecast, saying that by the end of the week there would be snow and sub-zero temperatures.  Thanks for that, I thought. 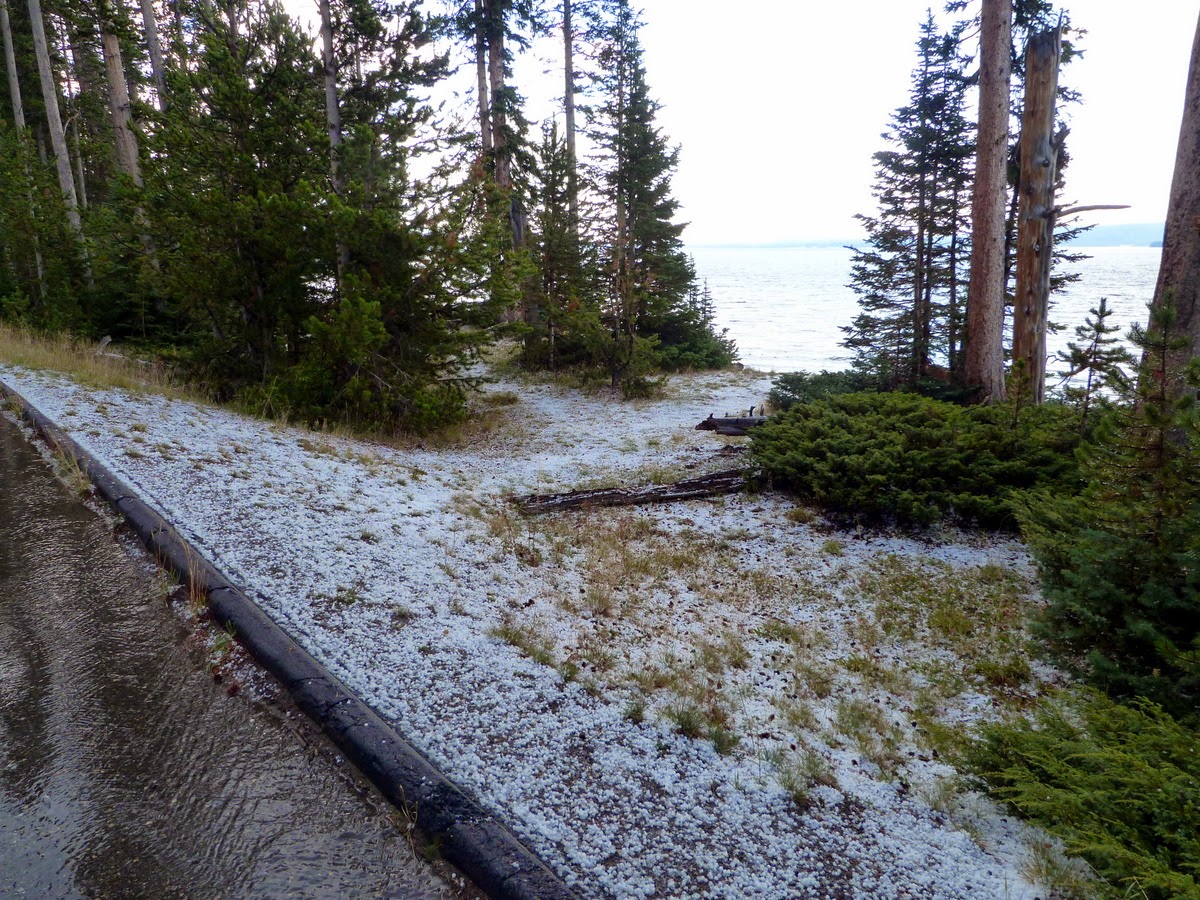 When the storm abated we set off again in time to see Joy, who had passed me a short time earlier, emerge from a car in a turnout, the occupants of which had offered her shelter out of the storm.  The wet road continued until – in good time – I reached Lake Village, but I couldn’t see anyone at first (I knew our rendezvous with the bus was at the Lake Hotel).  Setting off for a look around, I took a bite out of an energy bar, which returned the compliment by taking a chunk out a filling – damn!  The prospect of finding a dentist didn’t seem good, so I resigned myself to the situation for the next two weeks.  Eventually I found the others in the deli of the Lake Hotel, and soon after our bus driver, Woody, arrived, driving his 1976 bus with 1.5 million miles on the clock.  He was a great character and excellent guide who introduced himself by saying “It’s my day off!  The boss asked me if I wanted to work on my day off, but I knew it wasn’t a question!” 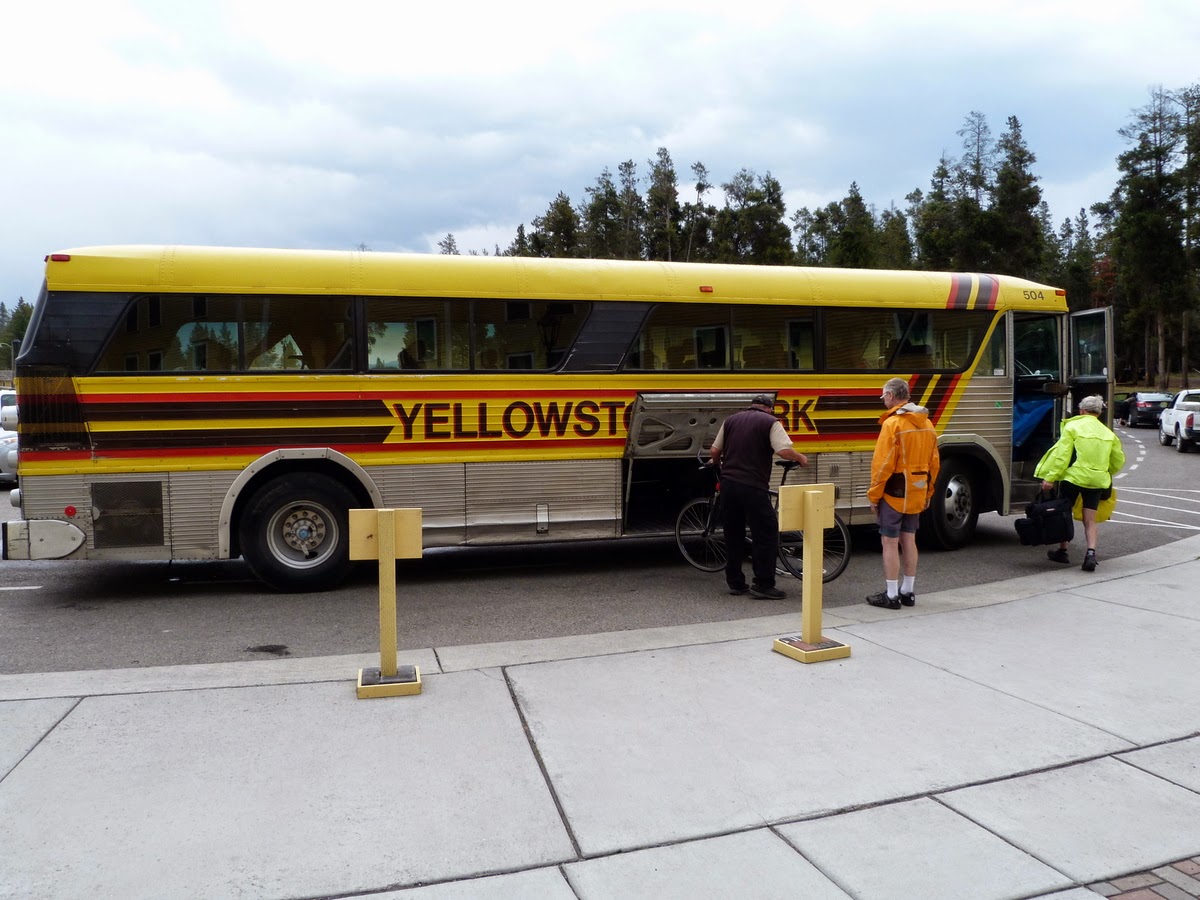 After much manoeuvring of bikes to get them all in, we set off, through traffic jams caused by Bison on the road, and a superb male Elk just sitting minding his own business near the roadside.  The rain started again, accompanied by hail, sleet, thunder and lightning.  Woody showed us various points of interest on the Grand Loop Road (we were to retrace our steps back as far as Canyon Village the next day) and also drew attention to the weather in a way which would encourage any cyclist, I don’t think! – “Look guys, it’s lightning!... and thundering!... and now there’s some snow in the rain!  And you’re going CYCLING?!!!”  Finally we arrived at the Old Faithful Inn, to a surprise, and not a good one.  But I’ve gone on for long enough – I’ll tell you what went wrong at Old Faithful in a wee blog post all on its own, next time I sit down at the computer. 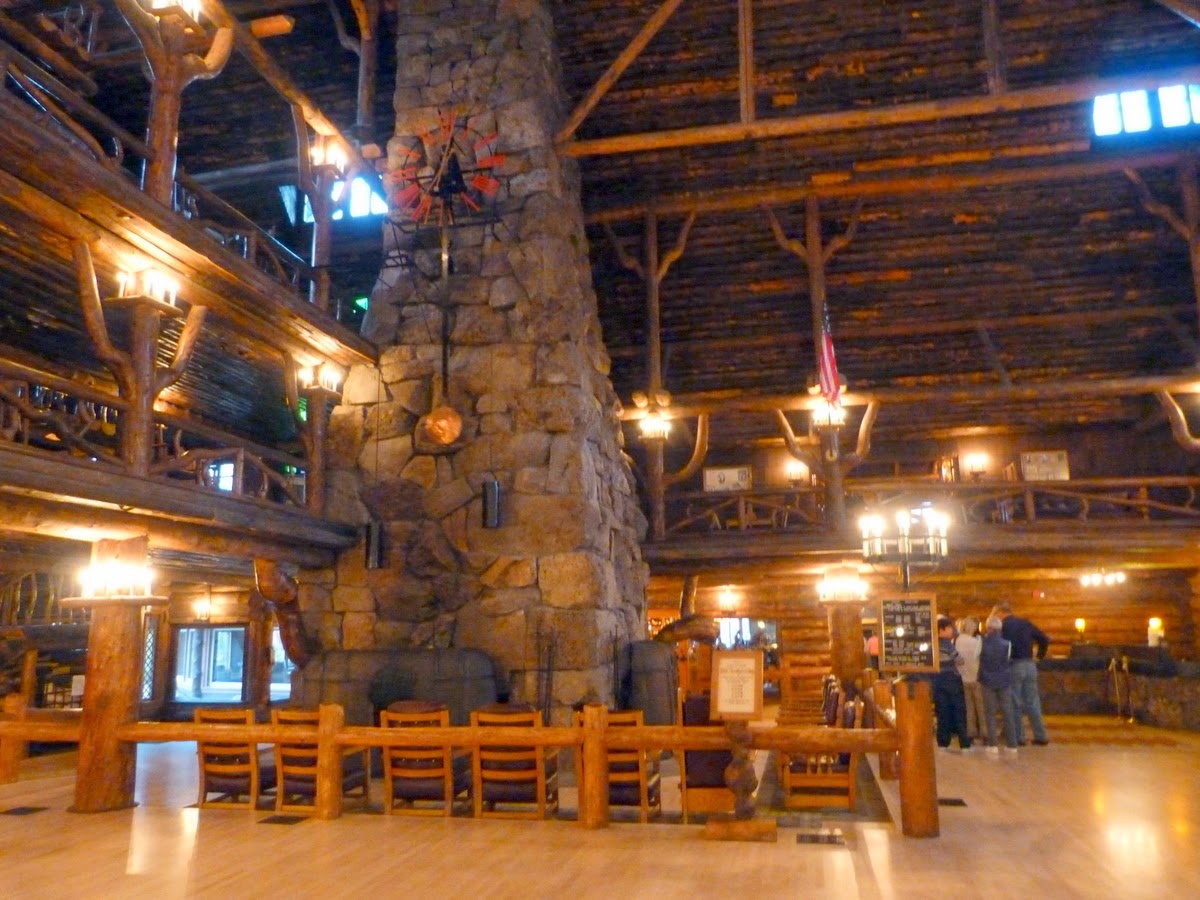 At least we managed to arrive at Old Faithful, which felt like an achievement in itself.!  Total mileage now 112.9
Posted by Bill Honeywell at 17:59