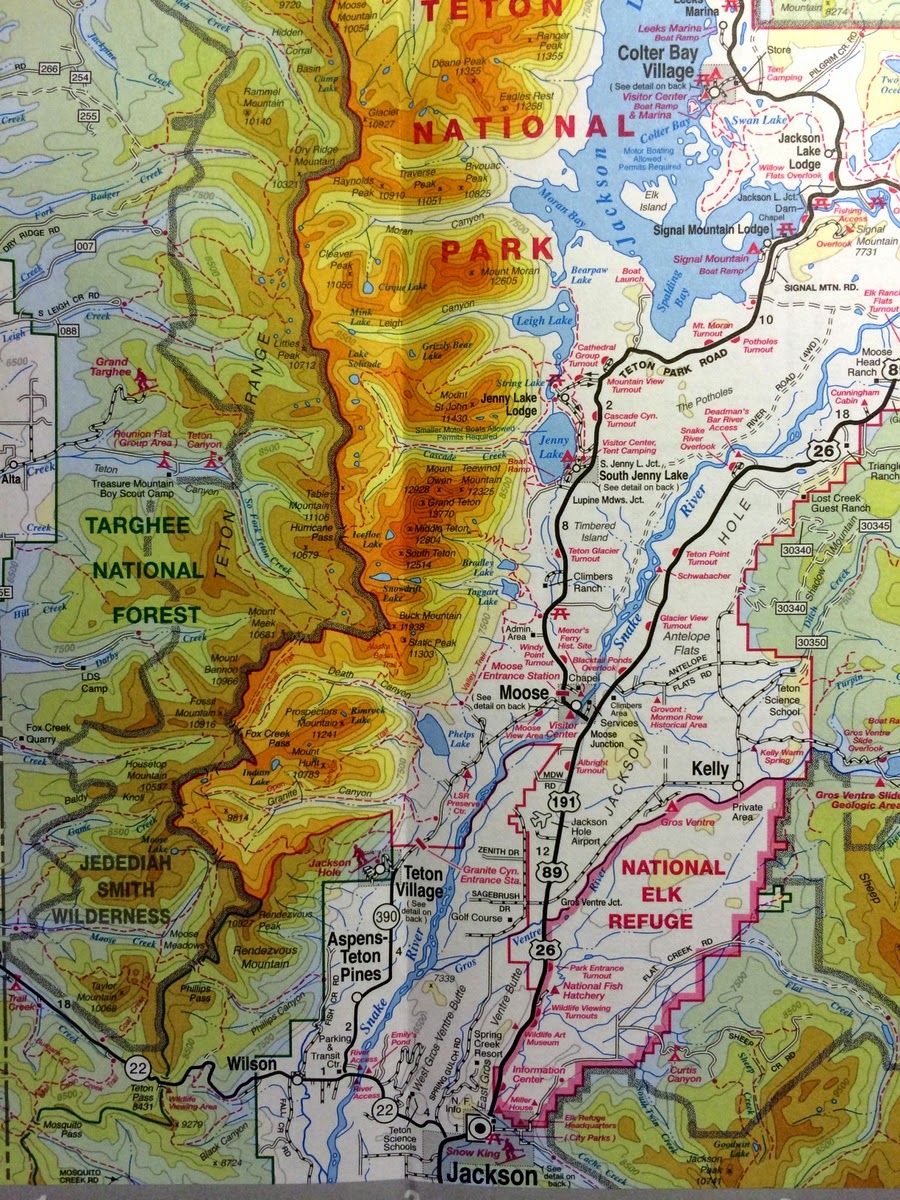 It was a bit of a disappointment when, expecting my body clock to adjust quickly, I once again woke up at 2 am and found it difficult to get back to sleep.  The situation wasn’t helped by Richard’s phone chiming every time it received another message (there were several) – and Richard couldn’t hear it.  Nor was it helped when at 5 am the occupants of the room upstairs got up and marched backwards and forwards in heavy boots for an hour and a half, before leaving at 6.30.

Finally dawn arrived and it was time to get out of bed and don cycling shorts and a light top, because the weather forecast was promising.  But the forecast failed to mention that first thing it would be cold and grey.  More misty than cloudy, but grey.  After some discussion we decided to visit Bubba’s for breakfast once again and head off directly from there, so we left the motel on our fully loaded and journey-ready bikes.  Just a minute! – I hear someone asking “What happened to all those big bulky bike bags?” – and you may well ask!  Well, the lady running the motel has an apartment behind the reception area, and apart from her little dachshund she lives alone, so she said she was quite happy for us to leave the bags in her living room for two and a half weeks.  By the time we’d got them all in, there was only just enough room left for a lady, a dachshund and a TV to be honest, but she seemed happy enough. 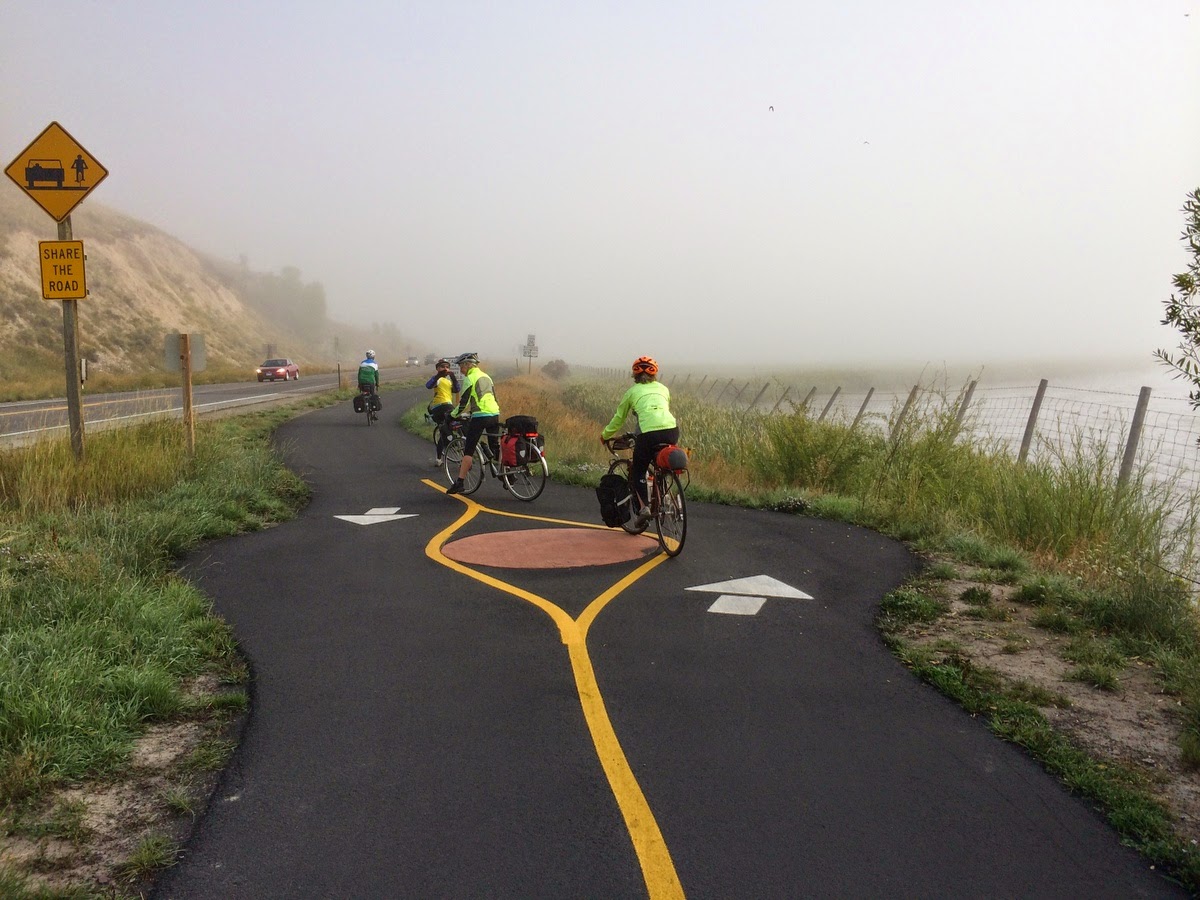 After our wholesome breakfast we were on our way in convoy through the streets of Jackson, looking at the mist cloaking the hills, and with the cold almost penetrating our bones – well certainly my fingers.  Sadly, the mist prevented clear views of the river, where Kathy had seen Trumpeter Swans the previous day, but we found the cycle path which runs parallel to the main road north out of town, with the National Elk Refuge on the right.  There were lots of Swallows (surely they’d soon leave for warmer climes), Brewer’s Blackbirds and many many ‘LBJs’ (a bird-watchers’ term for ‘Little Brown Jobs’.  I had no idea what they were.  As the sun burnt the mist back and we looked back through a last ribbon of white towards Jackson, a Hawk, probably Red-Tailed, flew into a nearby tree and the Tetons came into view, a really fantastic sight.

A quick note for birdwatchers.  What we call Buzzards, Americans call Hawks. There are lots of other birds with different English and American names.  Divers are Loons, Goosanders are Mergansers, Buntings are Sparrows, American Robins look nothing like British Robins, and Tits are Chickadees.  I haven’t worked out why some Woodpeckers are Woodpeckers and others are Sapsuckers, but I’m sure I will one day. 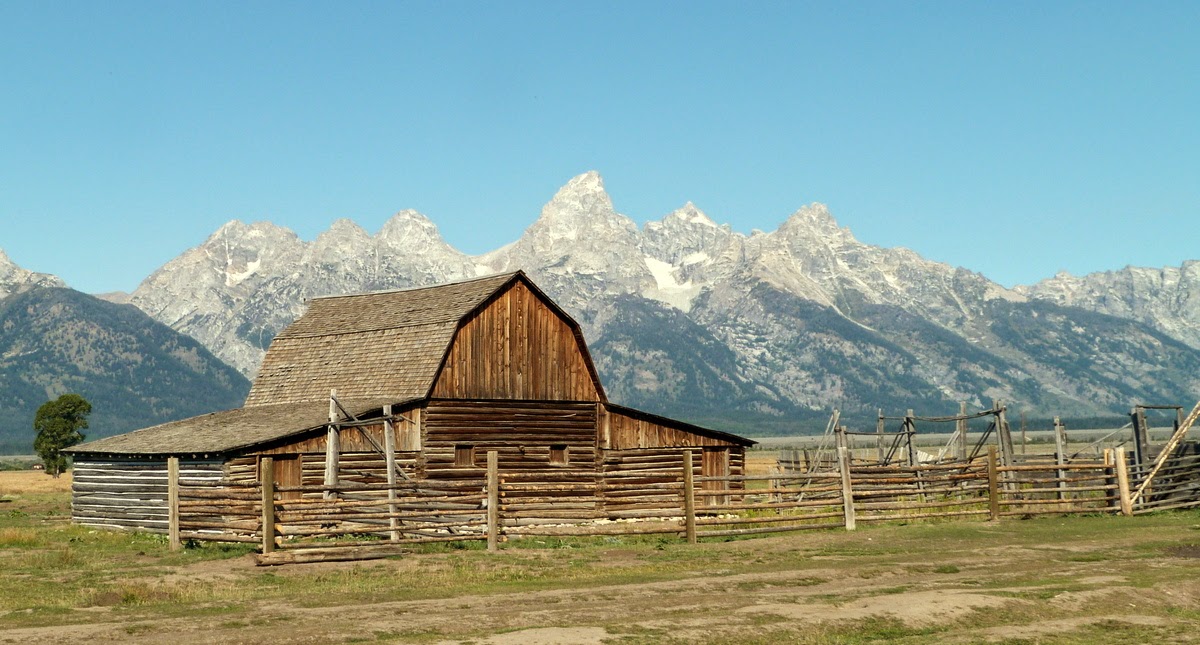 Continuing north on the cycle path we crossed the Gros Ventre River (pronounced ‘Grow-Vaunt’), then turned right on a detour which we hoped would give us a good photo-opportunity – of the wooden barns on Mormon Row, with the Teton Mountains in the background.  The road was smooth and straight until our turn into Mormon Row, a 3-mile dirt road, rough in places.  But it was worth it.  After passing a few shacks by a wind pump (for pumping water I think) we came to the first barn.  There was a herd of Bison in the distance, a Rough-legged Hawk (Buzzard) made an appearance, and a few tourists, including one from Lincolnshire who commented on the Clitheroe Bike Club shirts worn by Richard and me.  Having taken our photos we completed the loop back to the main road, seeing a few dazzling sky-blue Mountain Bluebirds on the way.

At Dornans, Moose Village, we stopped for coffee and cake.  Dornans is like a small village itself, catering for boating, fishing and other pursuits.  I got talking to a Dane who now lives in California, holidaying with friends from his home country:  it seemed odd talking Danish in NW America!  We crossed the Snake River and entered Grand Teton National Park on the Grand Teton Road, where we were each relieved of $12 for the privilege (the ticket lasts a week and is good for Yellowstone too).   We were still on a good cycle track which climbed with ever improving views, including the Teton Glacier (cars can also pull off the road into ‘turnouts’- aka lay-bys).  We were accompanied by loud and persistent clicking noises which didn’t come from our bikes but from grasshoppers with black and yellow wings, and a good deal of energy. 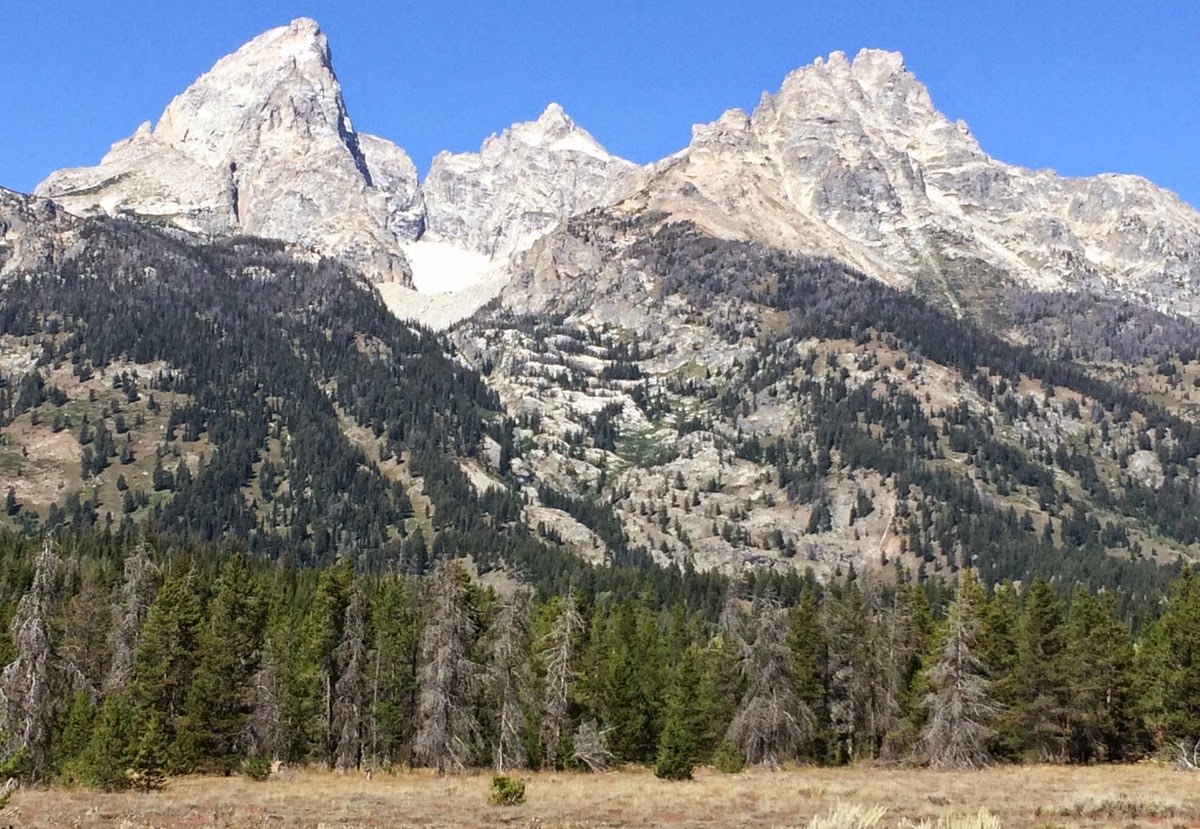 The loop road around Jenny Lake was worth following – there was information on a devastating fire in 1999 - then after a brief stop to eat sandwiches in a trailer park we arrived at Signal Mountain and Jackson Lake, with more spectacular views.  At Jackson Junction I took everyone on a brief detour to Oxbow Bed where there were some White Pelicans on the river.  A shower was threatening so we pressed on for the last six miles to Colter Village, on the shores of Jackson Lake. 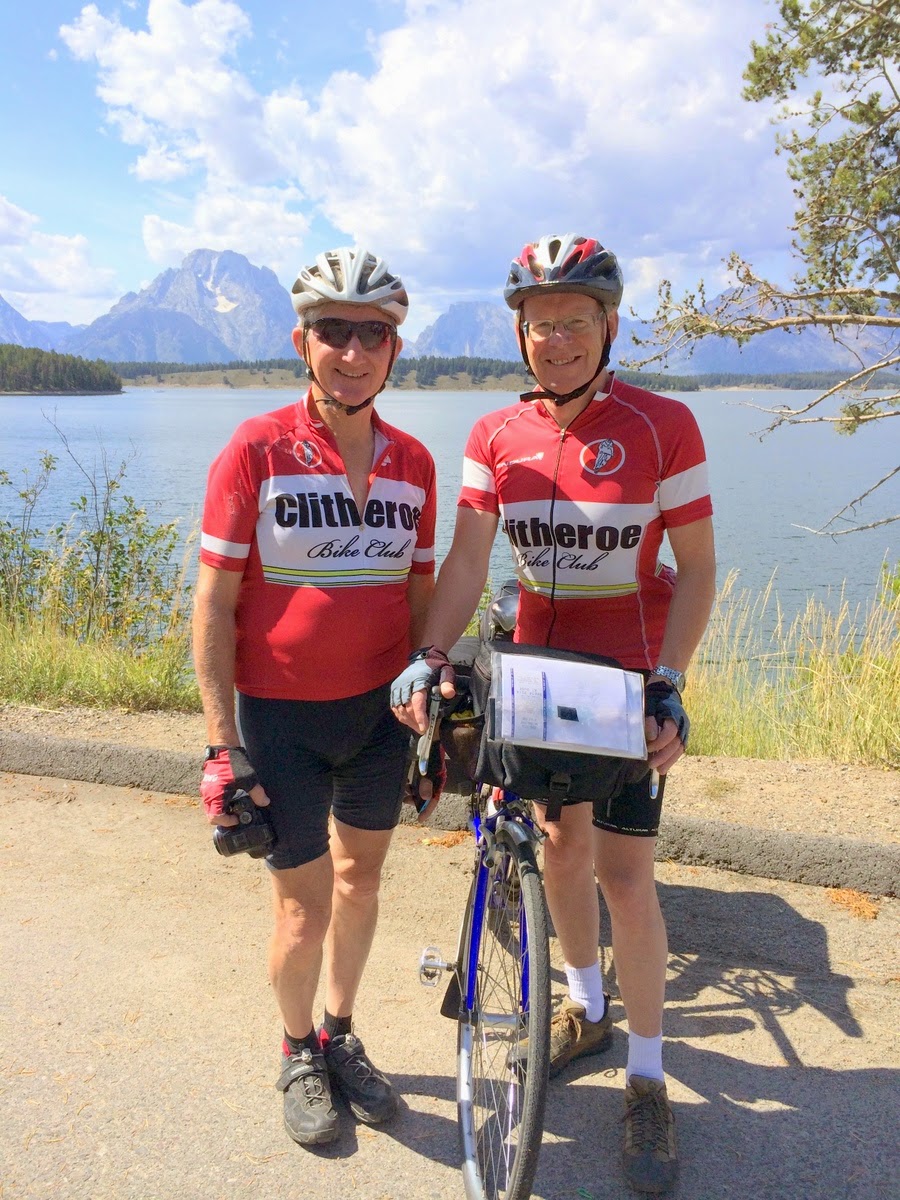 As we booked in, a chance remark from the girl at reception about the road to Old Faithful being closed set alarm bells ringing, so after dropping the bikes off at our cabin, Richard and I went to the Visitor Centre to investigate.  Not only was the road closure confirmed, but because there are so few roads in the park, the only alternative was a 79-mile detour.  You may think we’re good cyclists but anything on this scale is impossible.  And yet we were booked in at the Old Faithful Inn the next day and we had to get there, or alternatively stay somewhere like Grant, Lake or Canyon on the east side of the road blockage.  (I'm not sure how clear the map is, but the blockage was at De Lacy Creek, between Grant and Old Faithful). 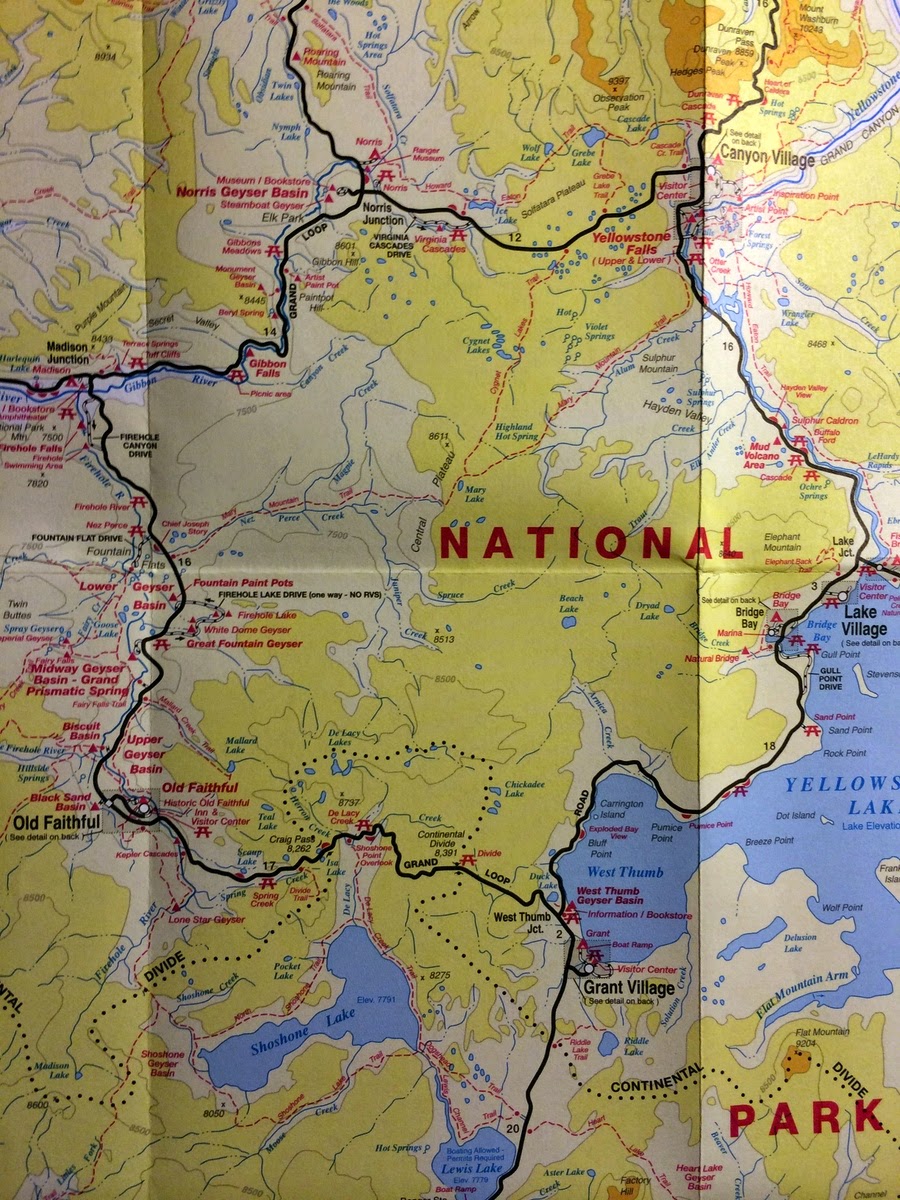 There was no mobile signal but the staff let us use their phone.  Richard spoke to Kimberley at Xanterra, who run all the accommodation inside the Yellowstone Park.  She said that everywhere was completely full and there was no possibility of staying anywhere but Old Faithful where we were booked in.  Our only option was to cycle part of the way and then organise a bus to take us around the detour to our destination.  As the time approached 5.30 we wondered whether we would get things organised before everyone went home for the day, but just in time we managed to charter a bus to pick us up at Lake Village at 3.30 pm the next day and then drive us, together with our bikes, 58 miles to Old Faithful.  So we still had to cycle 62 miles with some pretty serious climbing AND get there by 3.30.  And pay $80 each for the bus.  But there was absolutely no alternative, and at least we had a solution to the problem! 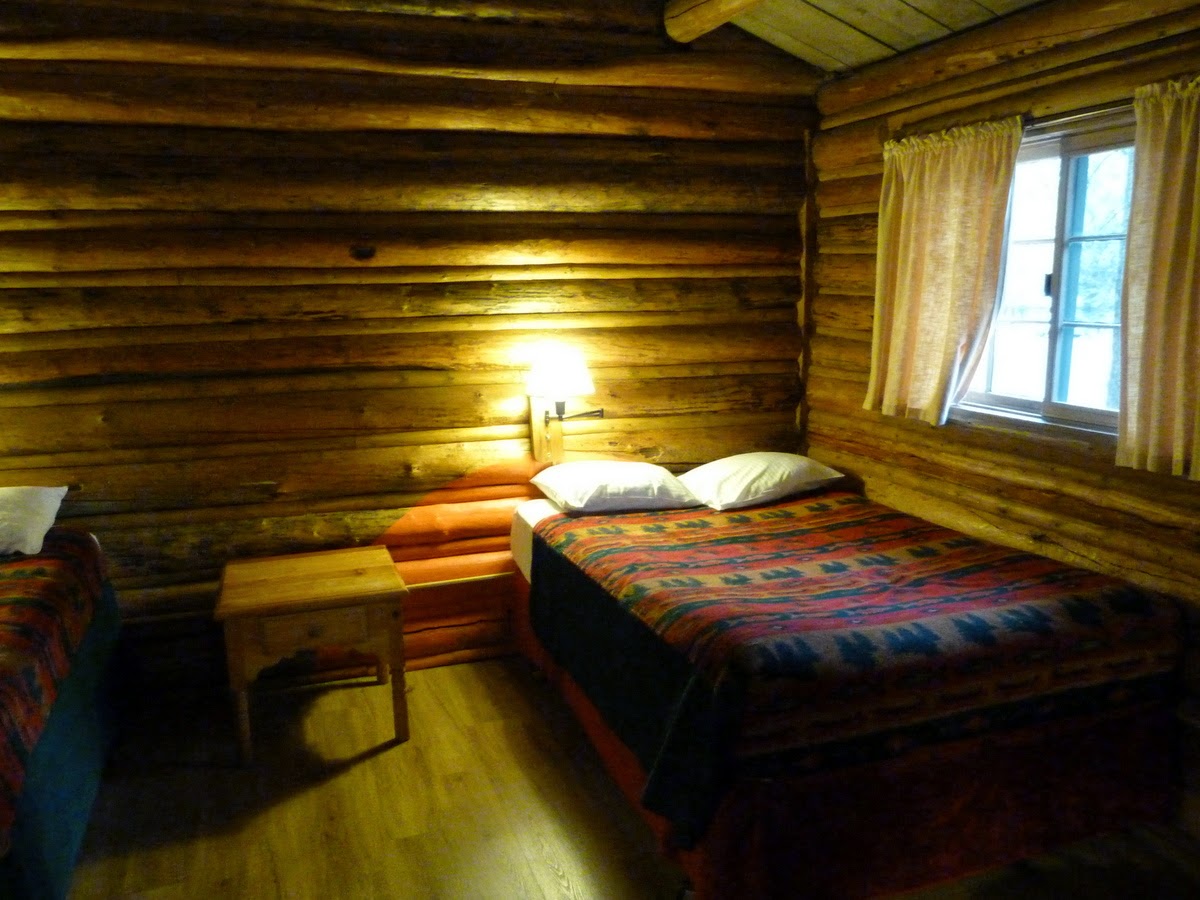 A quick cup of coffee, shower and freshen-up, a phone call home from the restaurant area, where there was wifi, evening meal together and then off for an early night before a challenging day tomorrow!  And guess what?  There would be more problems when we got to the Old Faithful Inn – but of course you’ll have to wait for the next instalment to find out what went wrong next! 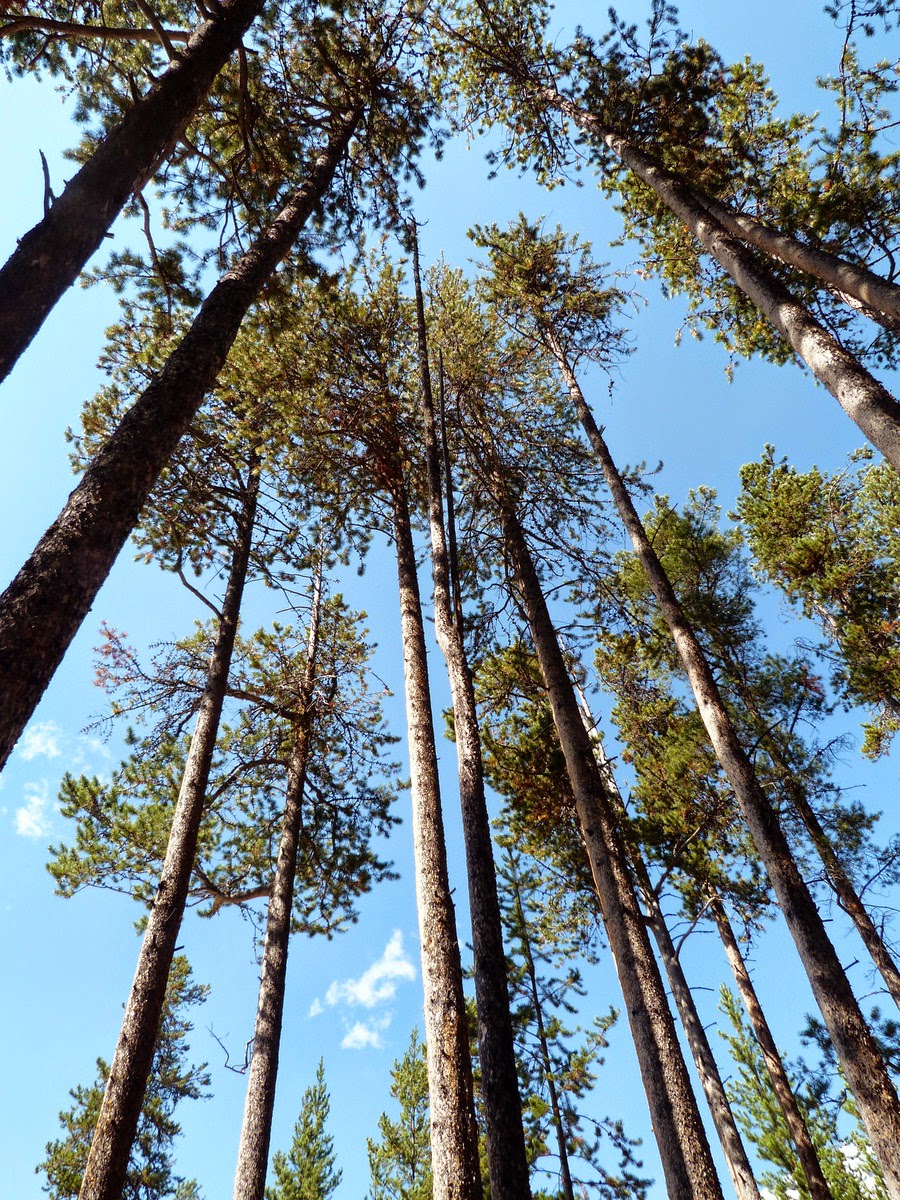