Today’s route looked promising, with wonderfully-named places to visit like Paradise Valley, Emigrant and Pray.  First we had to try and get breakfast, which was easier said than done.  If the girl at the Mexican Restaurant had spent less time apologising for the fact that she was on her own, and more time actually serving us, it could have helped.   I forgot to mention that the beans which were on the menu last night were described as ‘reheated’ or ‘refried’, I can’t remember which.  What the menu failed to say was that they were also regurgitated as I’m sure they must have been, judging by their creamy, almost runny constituency!

Actually, the first thing we saw as we left the motel for the nearby restaurant were two bull Elks clashing antlers and generally burning up large quantities of testosterone about 200 metres away on the other side of the main road.  Any attempts to take photos or otherwise get a closer look were quickly thwarted as one car after another stopped to watch and blocked our view. 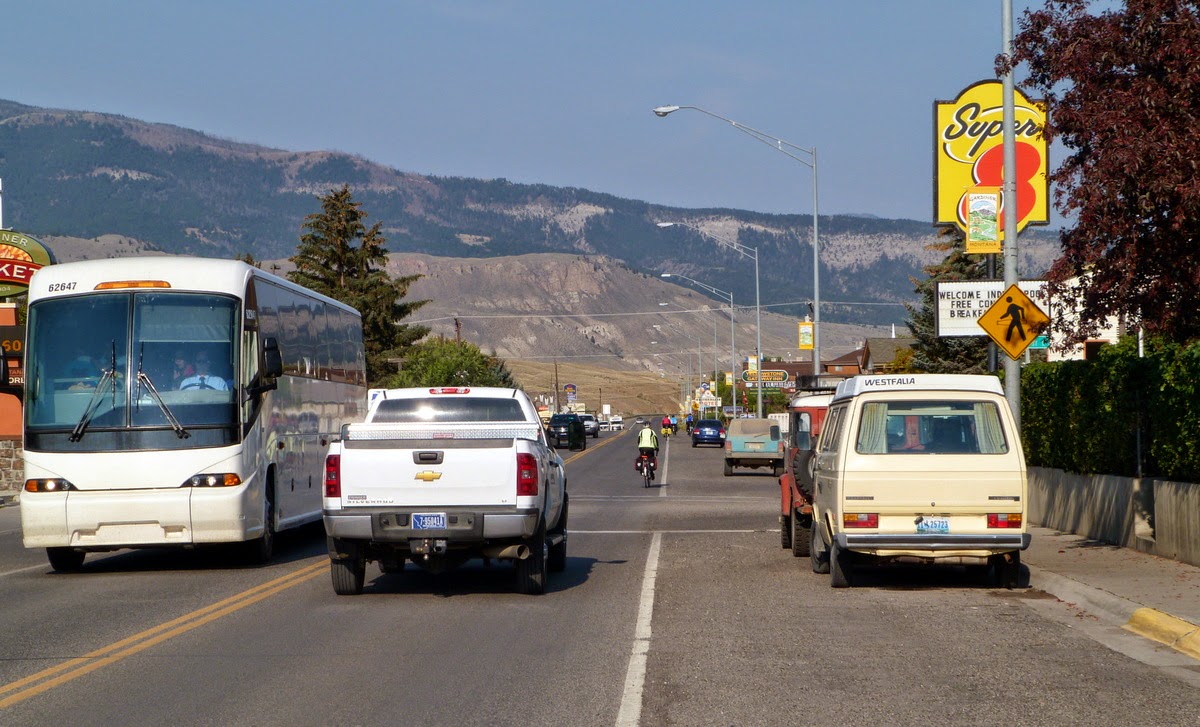 After a photo shoot at the Roosevelt Archway (with the help of a tourist couple from South Shields!) and getting a few things to eat from the town’s service station, we set off north along a very pleasant highway, with the Yellowstone River on our left.  It seems the custom in this part of America to place a little white cross by the roadside at the scene of any fatal accident, and although the road was pretty straight, we passed quite a few of these sad reminders.  It was another beautiful sunny day and it soon started to warm up again.  Better still, we were heading slightly downhill with a following wind – it doesn’t get much better! 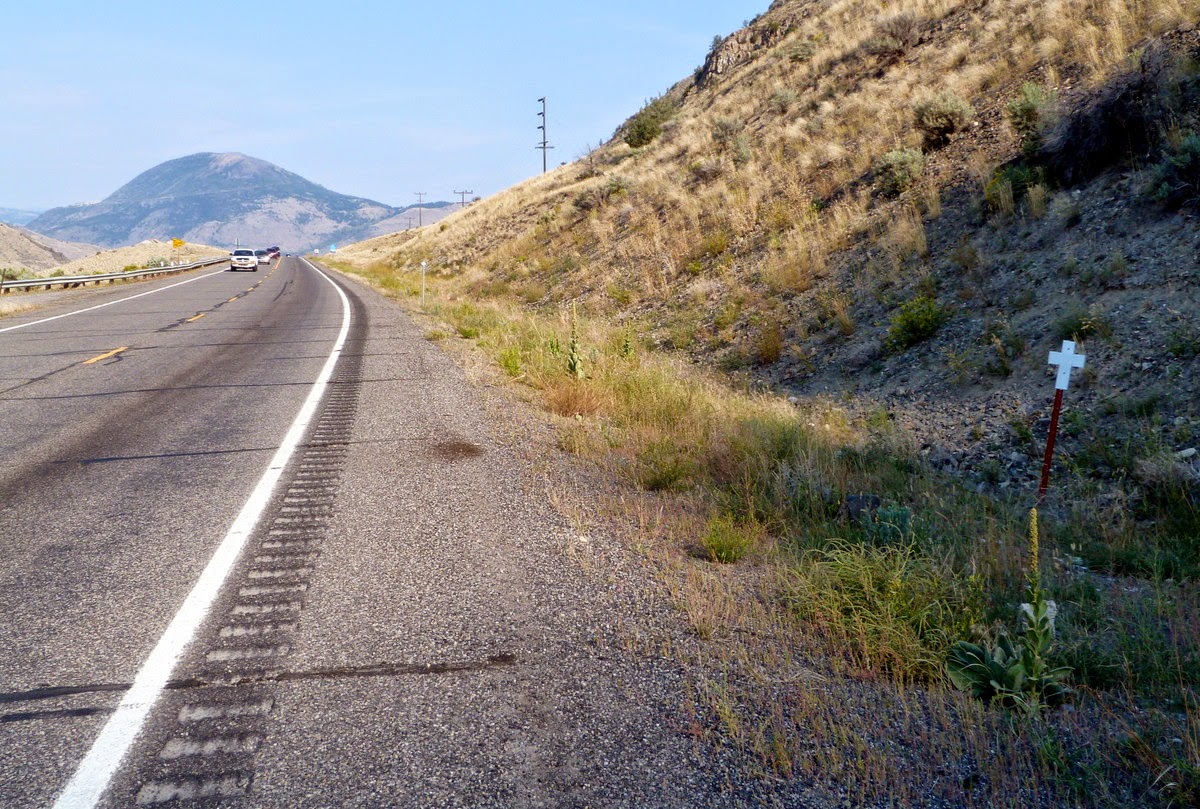 The Yellowstone River flows swiftly here, and after passing a huge red scar called Devil’s Slide it soon enters Yankee Jim Canyon with the road alongside, passing patches of wonderfully-striped gneiss rock.  Then the countryside opens out again and there are several recently-built expensive-looking homes. 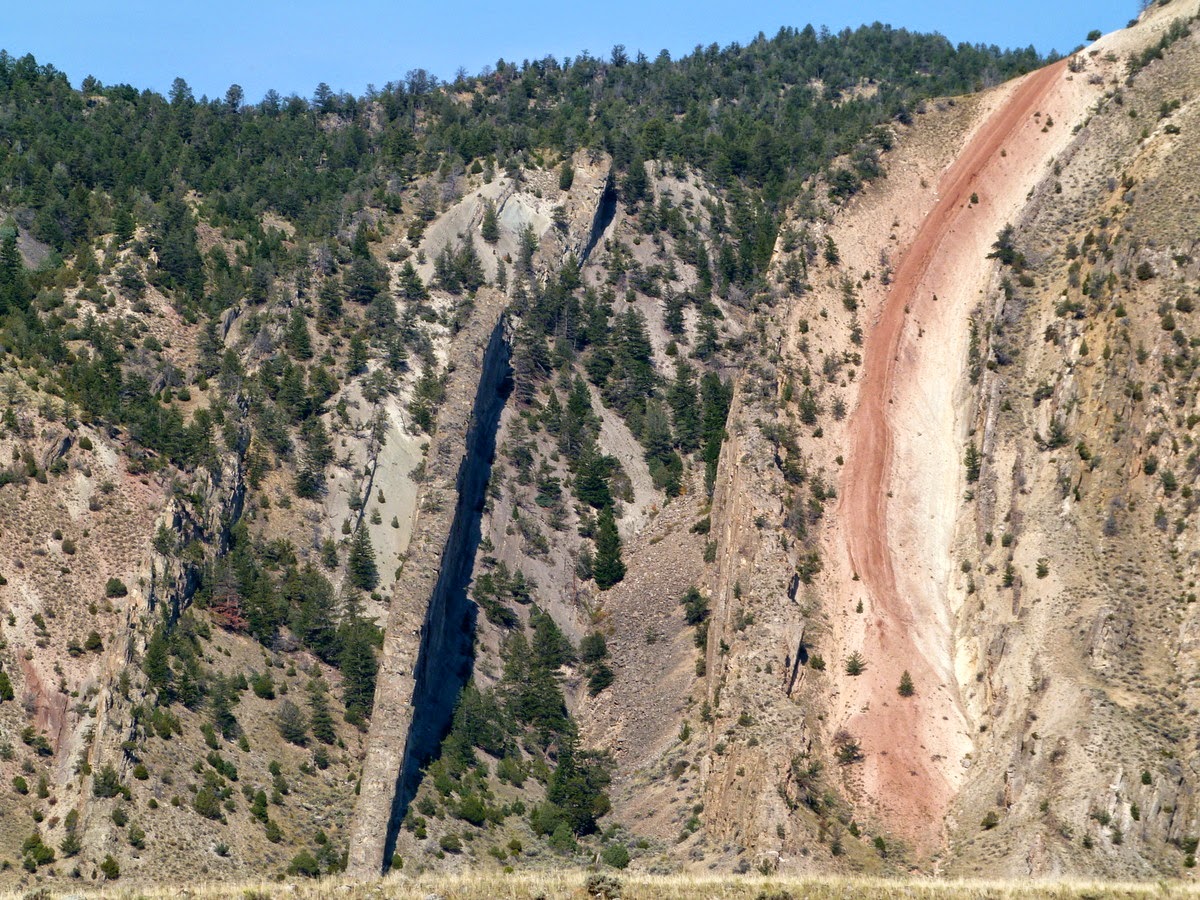 'The Devil's Slide' (right);  the wall-like structure to the left is another natural feature - a volcanic dyke, formed when magma is forced under immense pressure into a crack in the ground rock. 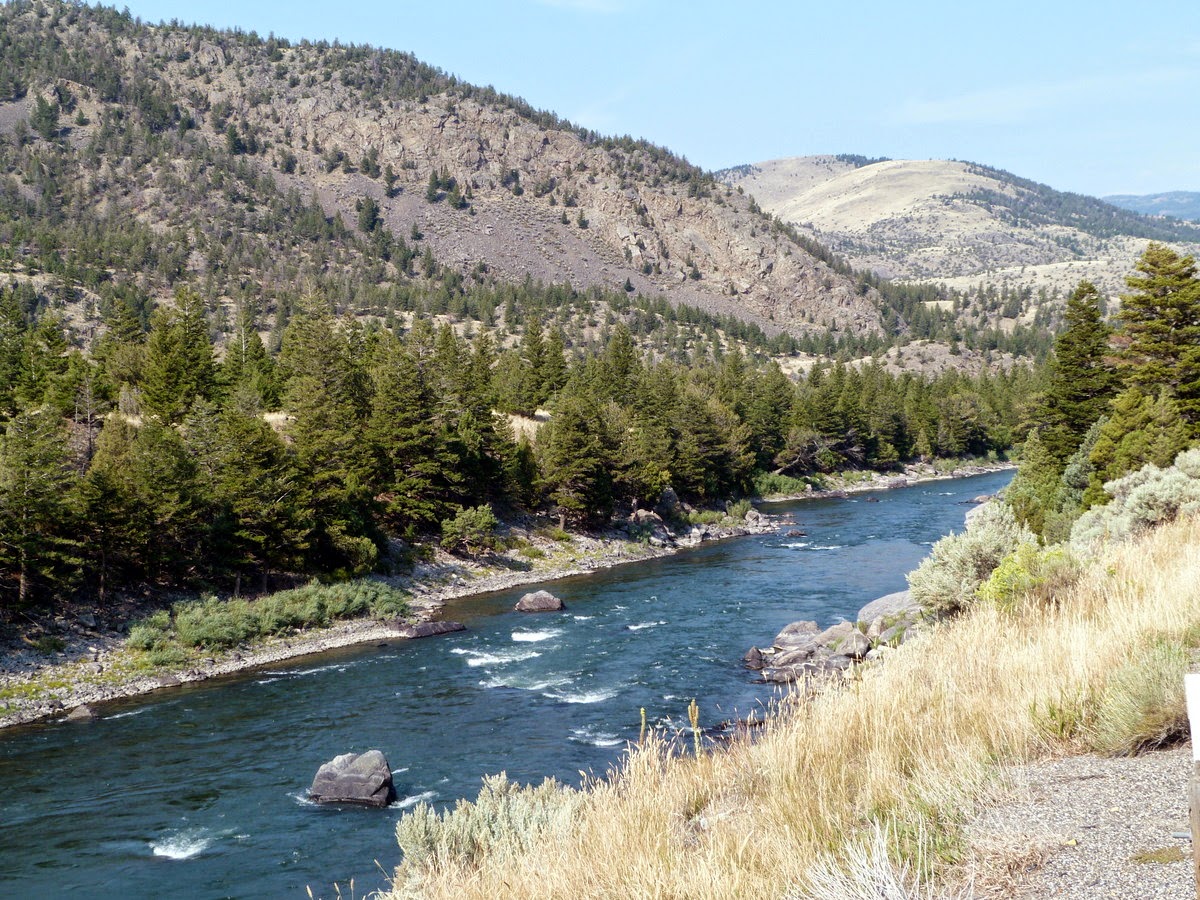 At 20 miles we turned right on to the quieter Paradise Valley road which would take us almost the whole of the rest of the way to Livingston.  By now, having stopped for photos and to slap on sun cream, I was running last on the road, but there was no rush.  I passed scattered farmsteads, old, new and under construction;  the river itself; scruffy places, smart places, even a house with a Datsun 240Z in the drive!   At Six-Mile Creek I slowed to look at all the crows and three Golden Eagles appeared, soaring to my right before effortlessly disappearing again.  Then just before Emigrant, a superb Red-Tailed Hawk was lazily riding a thermal. 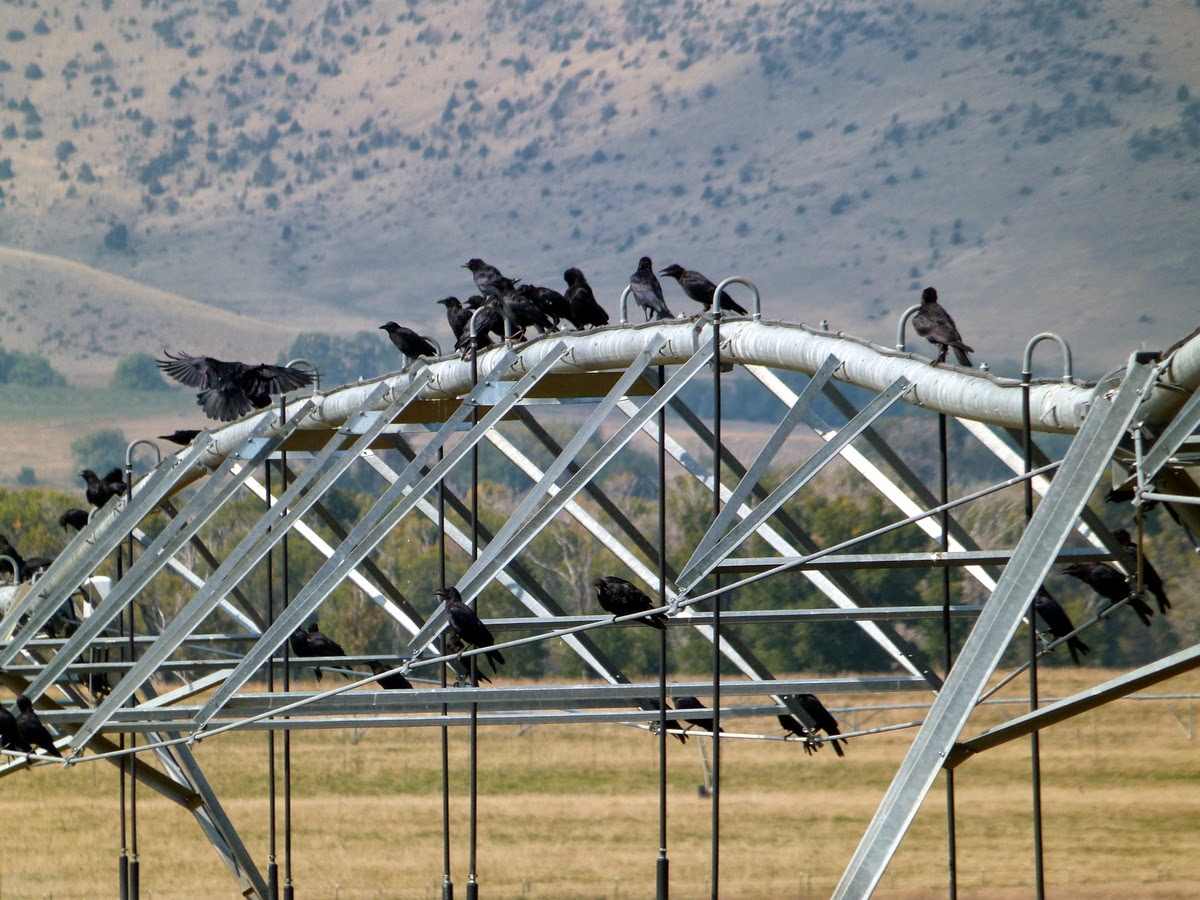 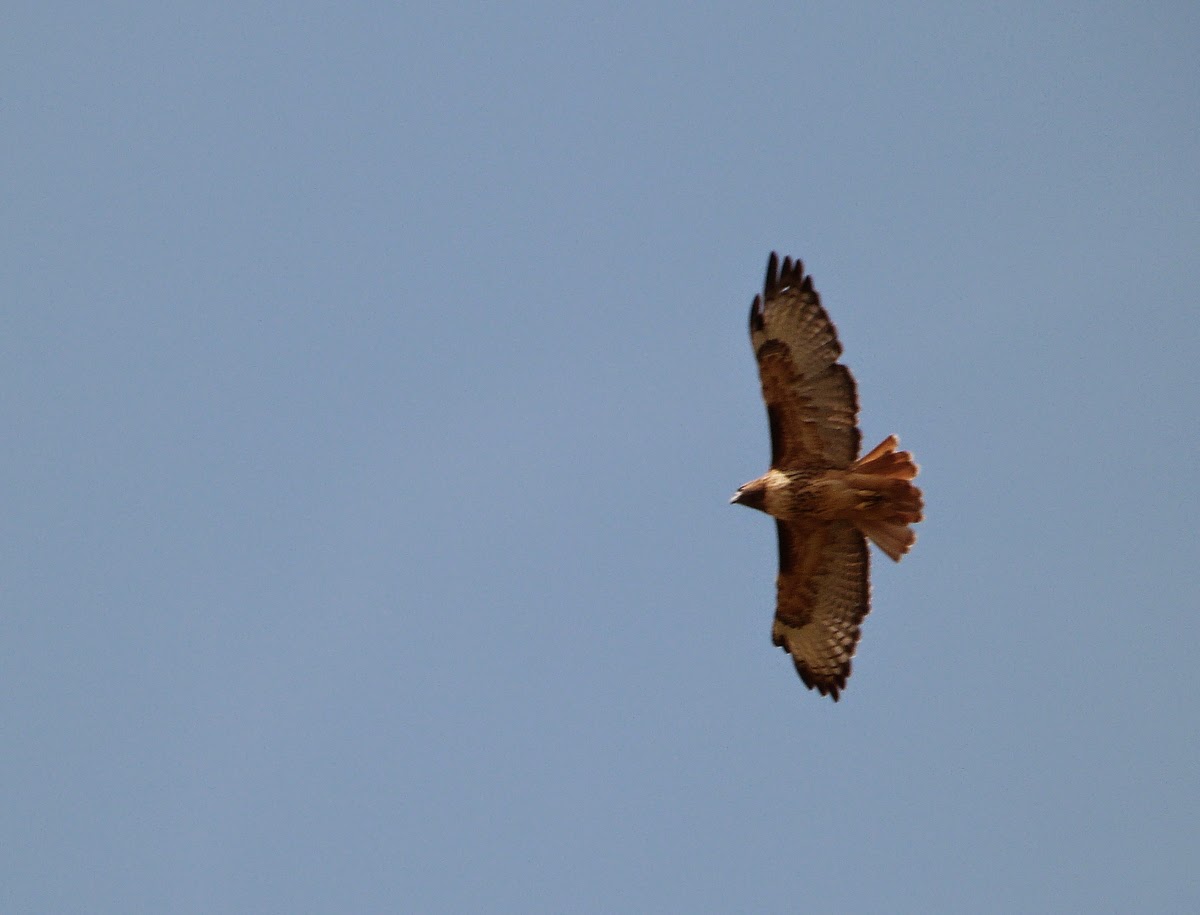 Turning left for Emigrant village I quickly found everyone at the first cafe.  Inside, the bar was bedecked with stuffed animals and deer heads:  there was the most delicious blueberry cheesecake on offer, which went down well with a coffee before I headed off again, now first on the road. 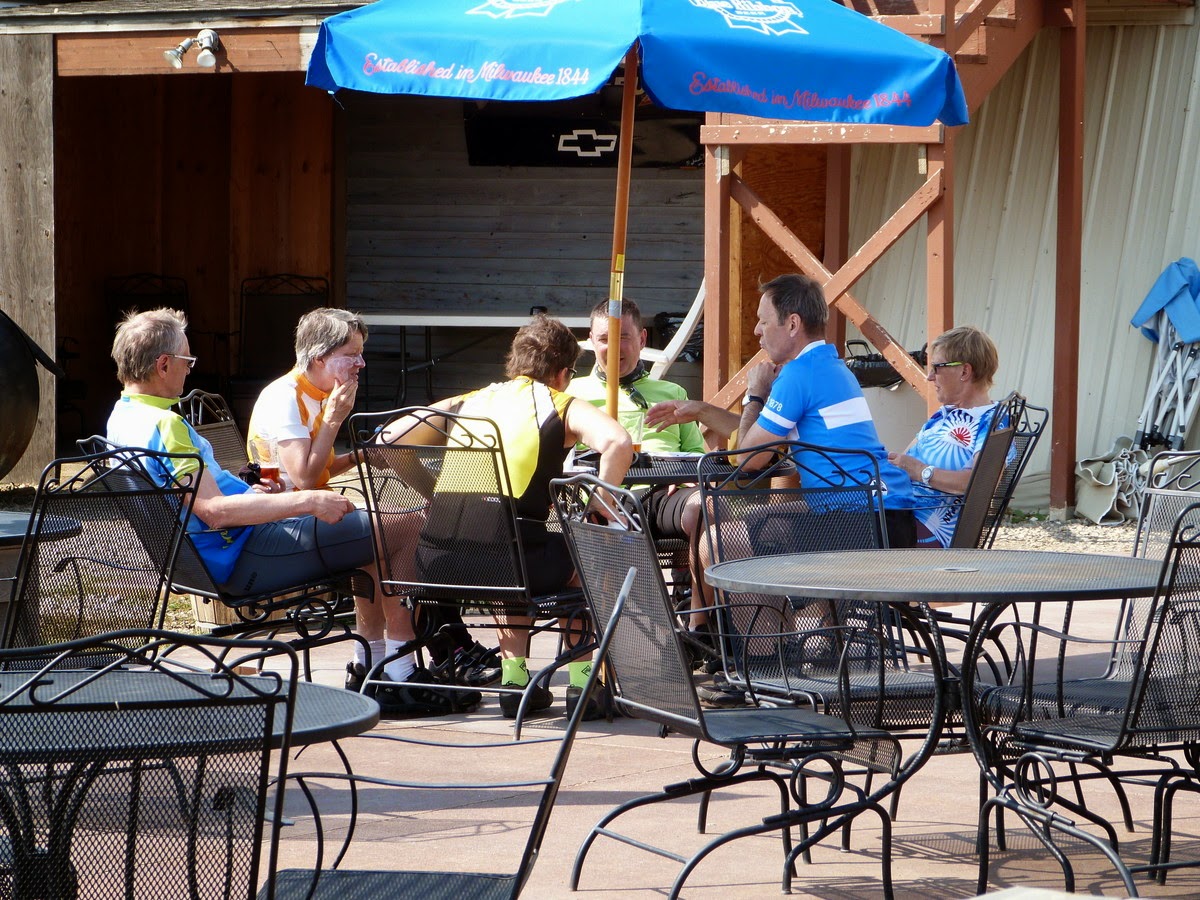 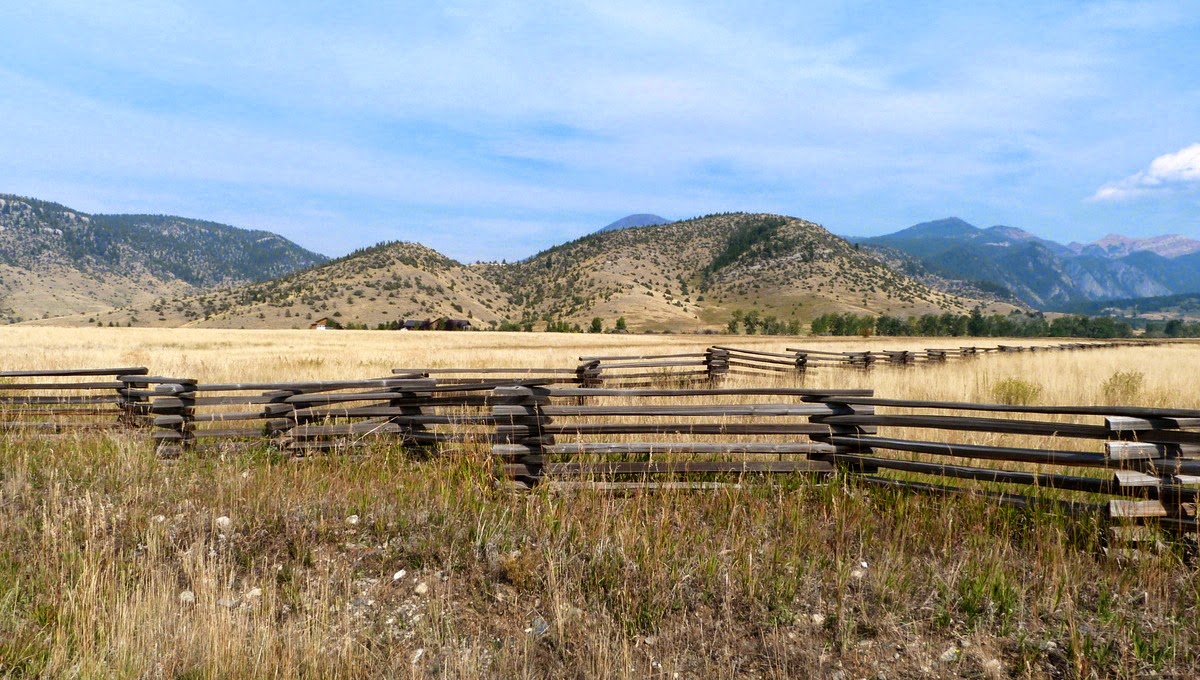 Richard caught me up before too long and we spent most of the afternoon cycling together, spotting various wildlife including more Hawks, Mule Deer, Killdeer (not a mammal but a bird of the Plover family).  We also saw two Bald Eagles but as they were both carved out of wood and decorating the entrances to ranches I guess they don’t really count.  Richard had to keep stopping to take photos of farm machinery – there was lots of it.  There was a big difference in the farmsteads too, some appearing very affluent with others quite the opposite. 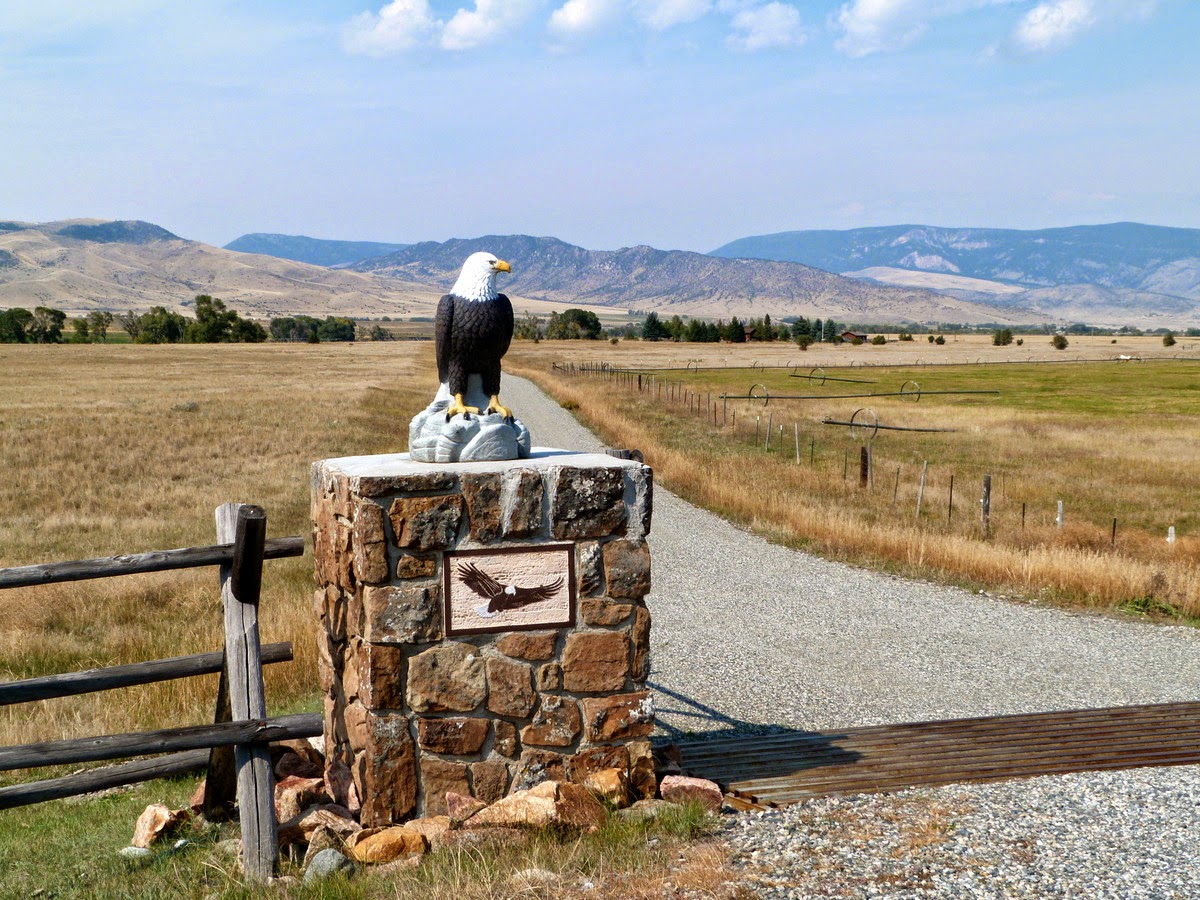 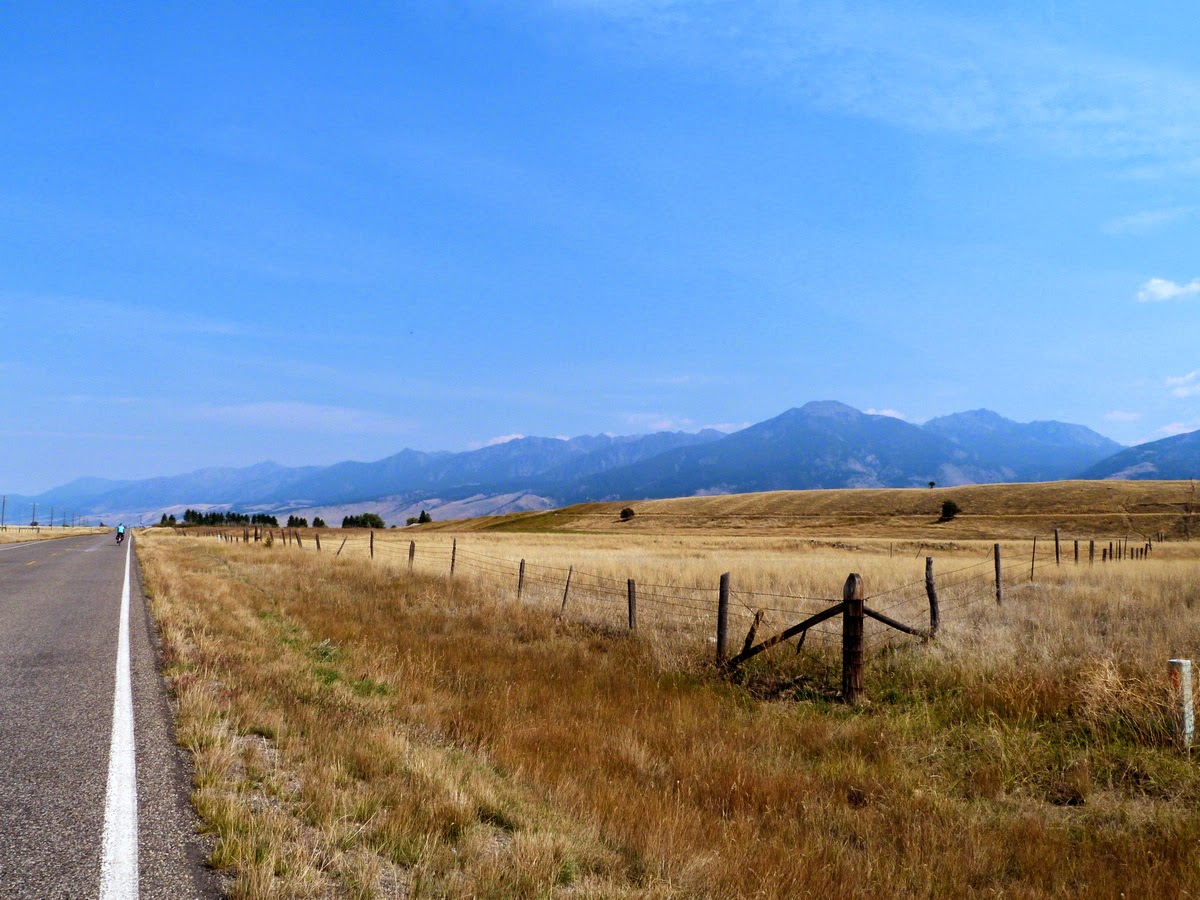 Paradise Valley , with the Absaroka Hills on the right

The settlement of Pray has a few old barns and the guide book refers to some Hot Springs there too, but I didn’t see them.  If they’re like Turkish Baths I’m not sure there’s an awful lot of customers around this quiet corner of America.  There were quite a few small hamlets, some with a primary school, pretty churches, and Mule Deer grazing on front lawns. 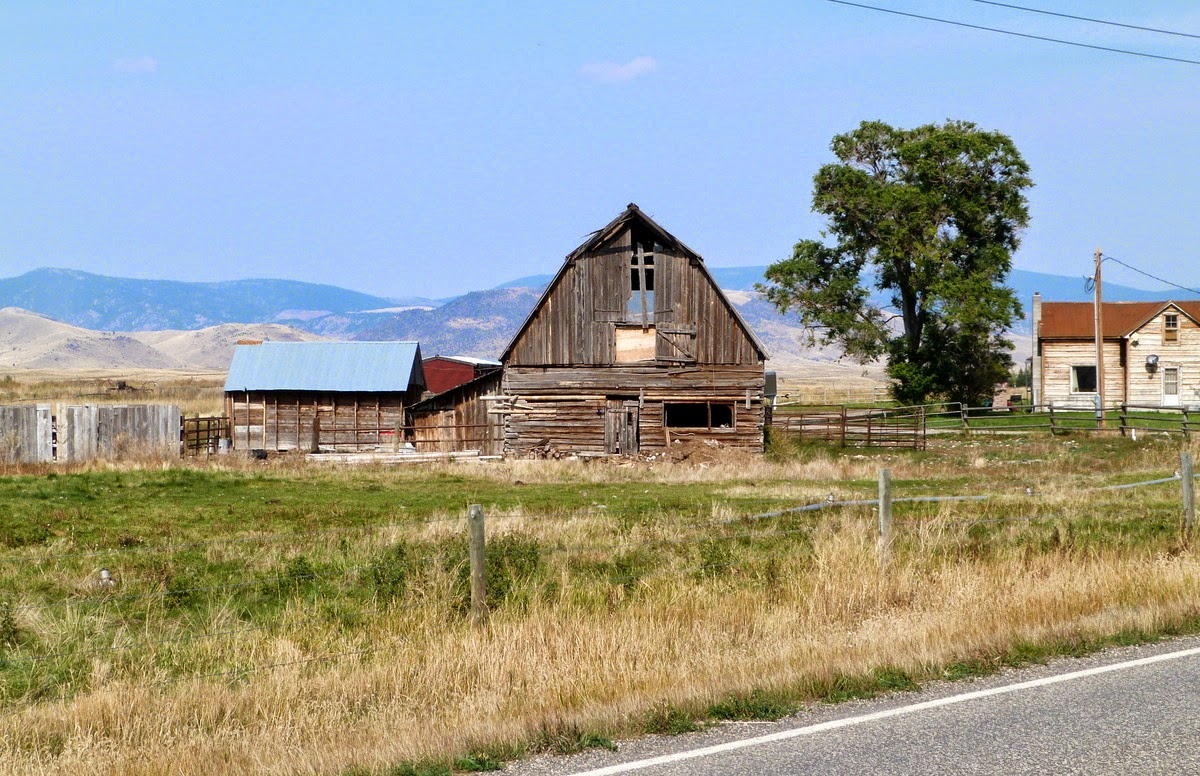 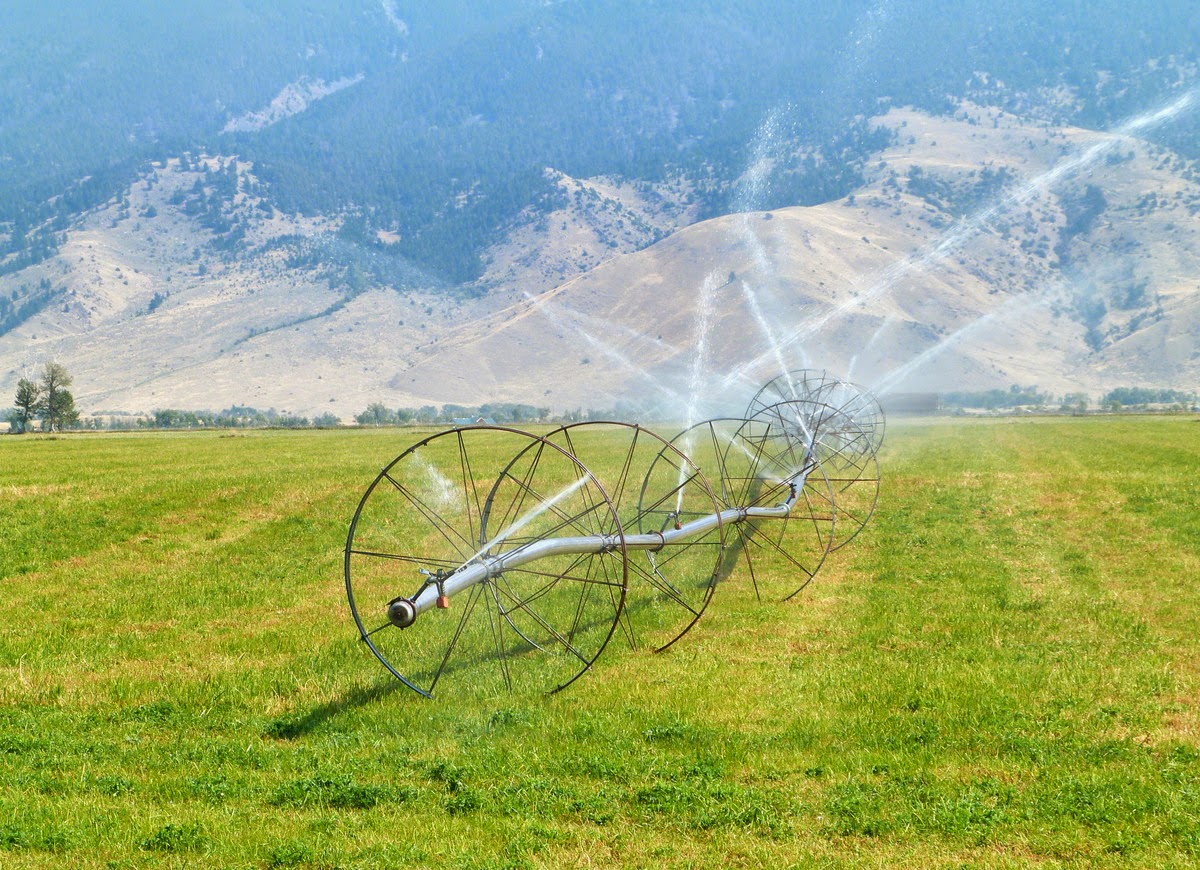 Lots of irrigation all along the Valley 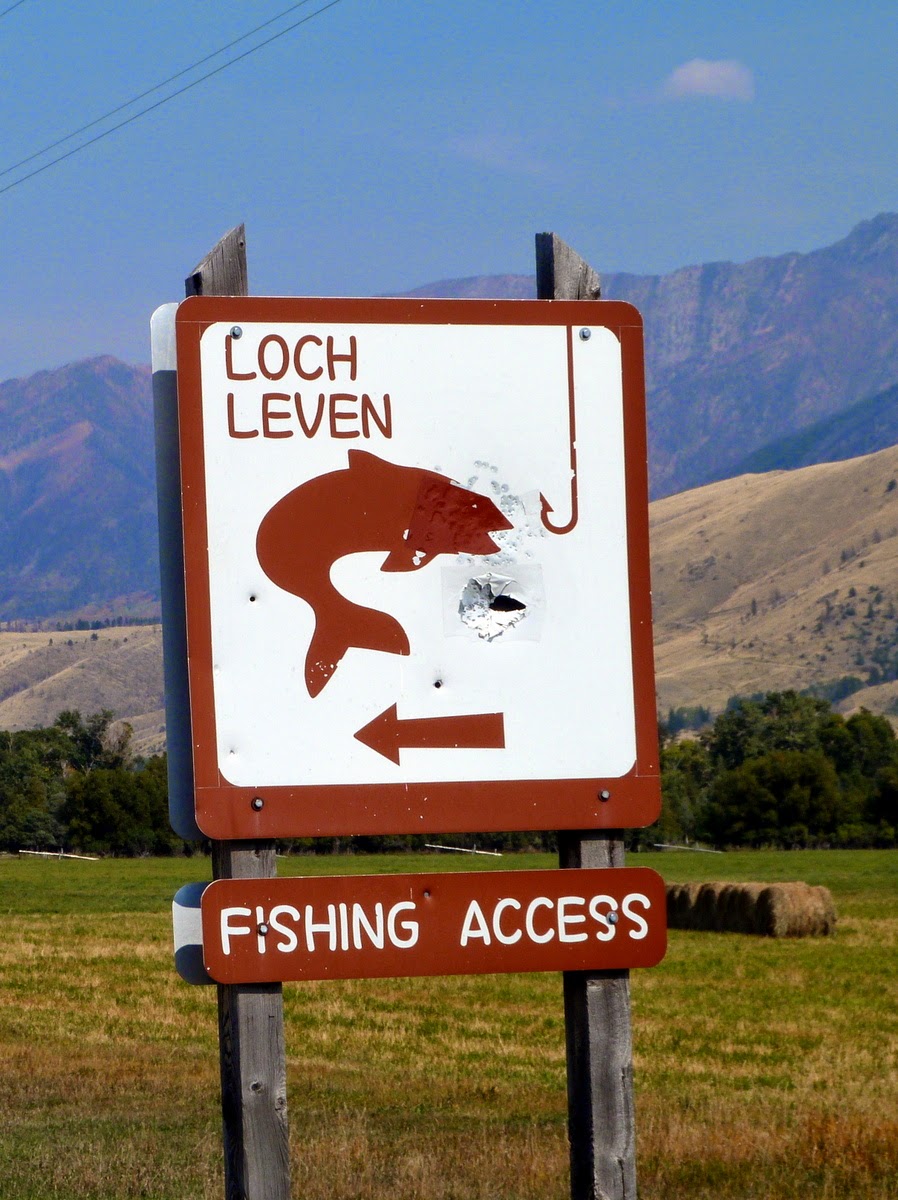 Most signs seem to have been used for target practice 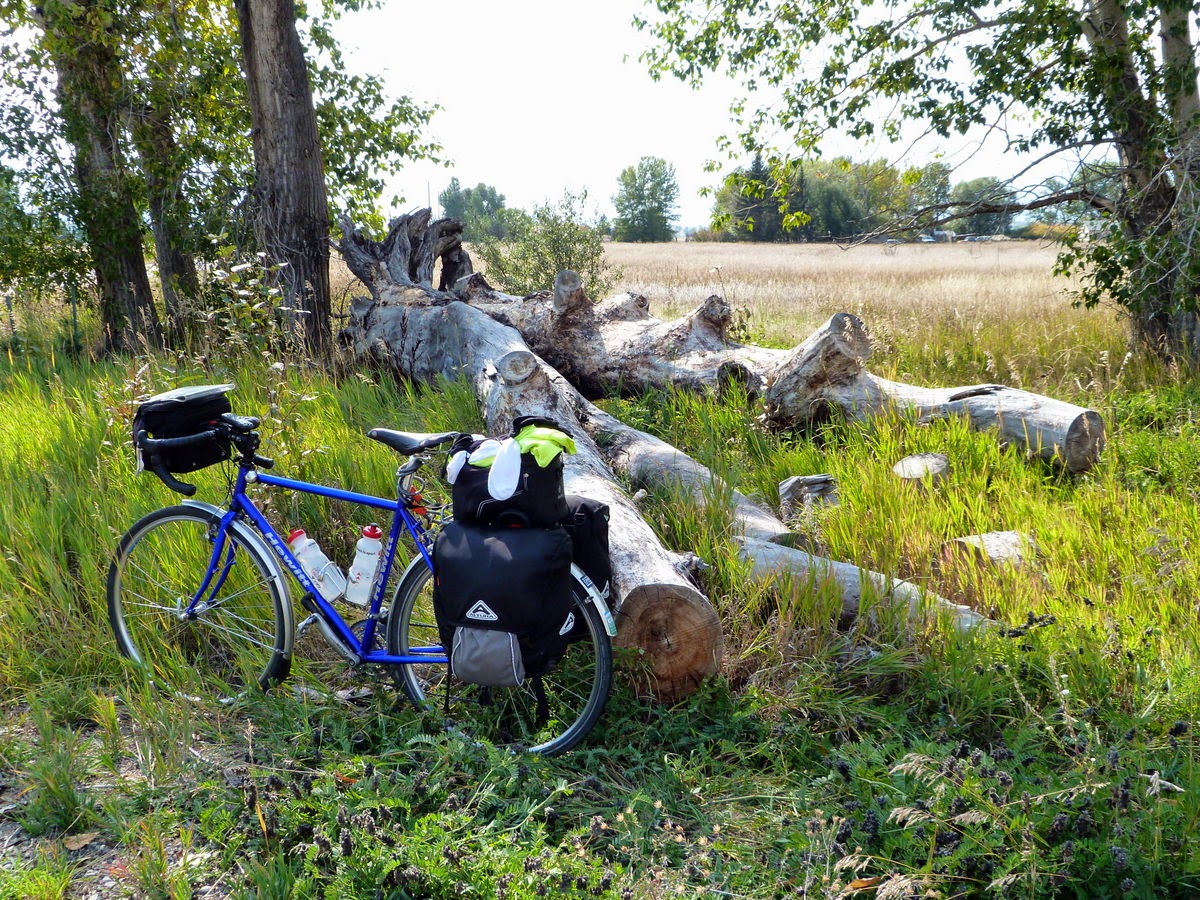 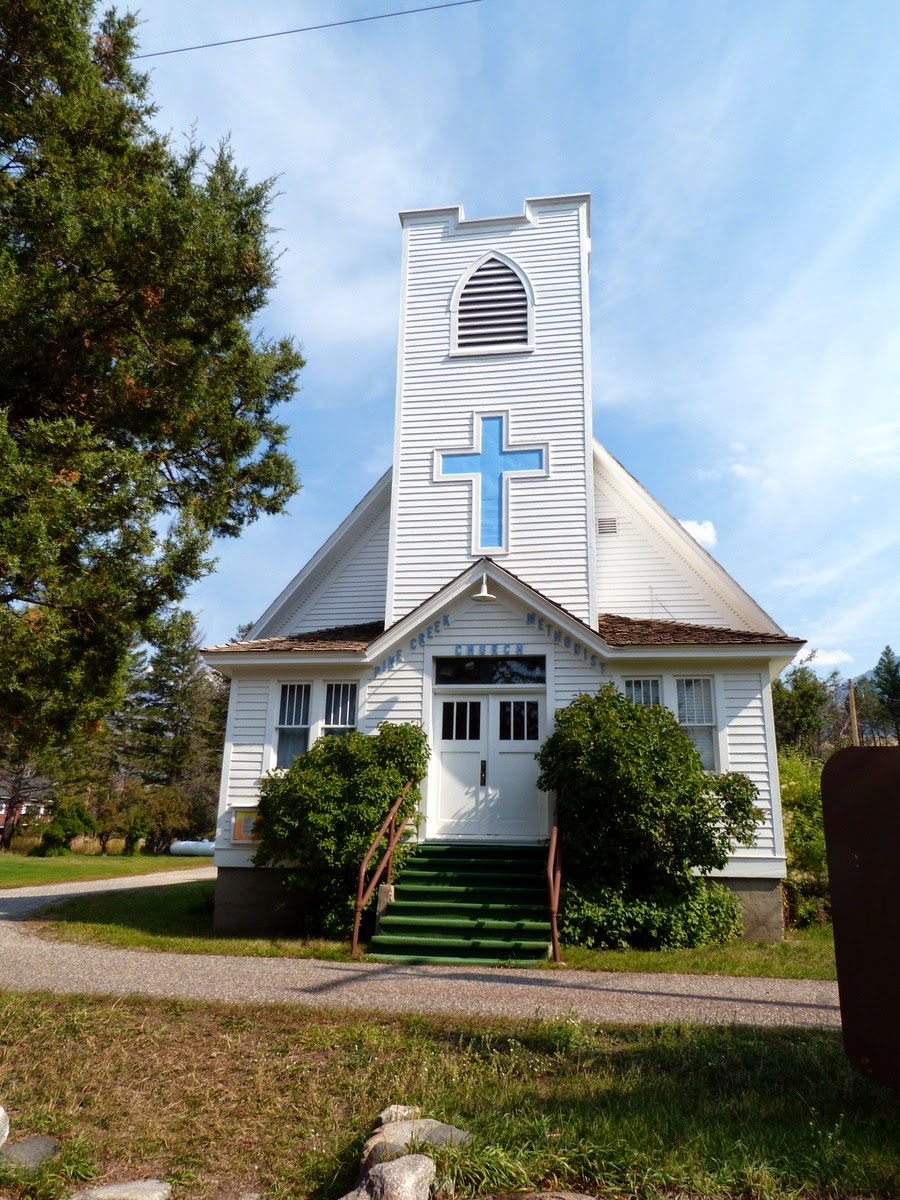 Andy and Kathryn caught us just before we crossed the river and rejoined the main road four miles south of Livingston, and for some reason we virtually time-trialled the last stretch on a cycle track which runs along a section of disused railway line into Livingston and our very welcoming motel. 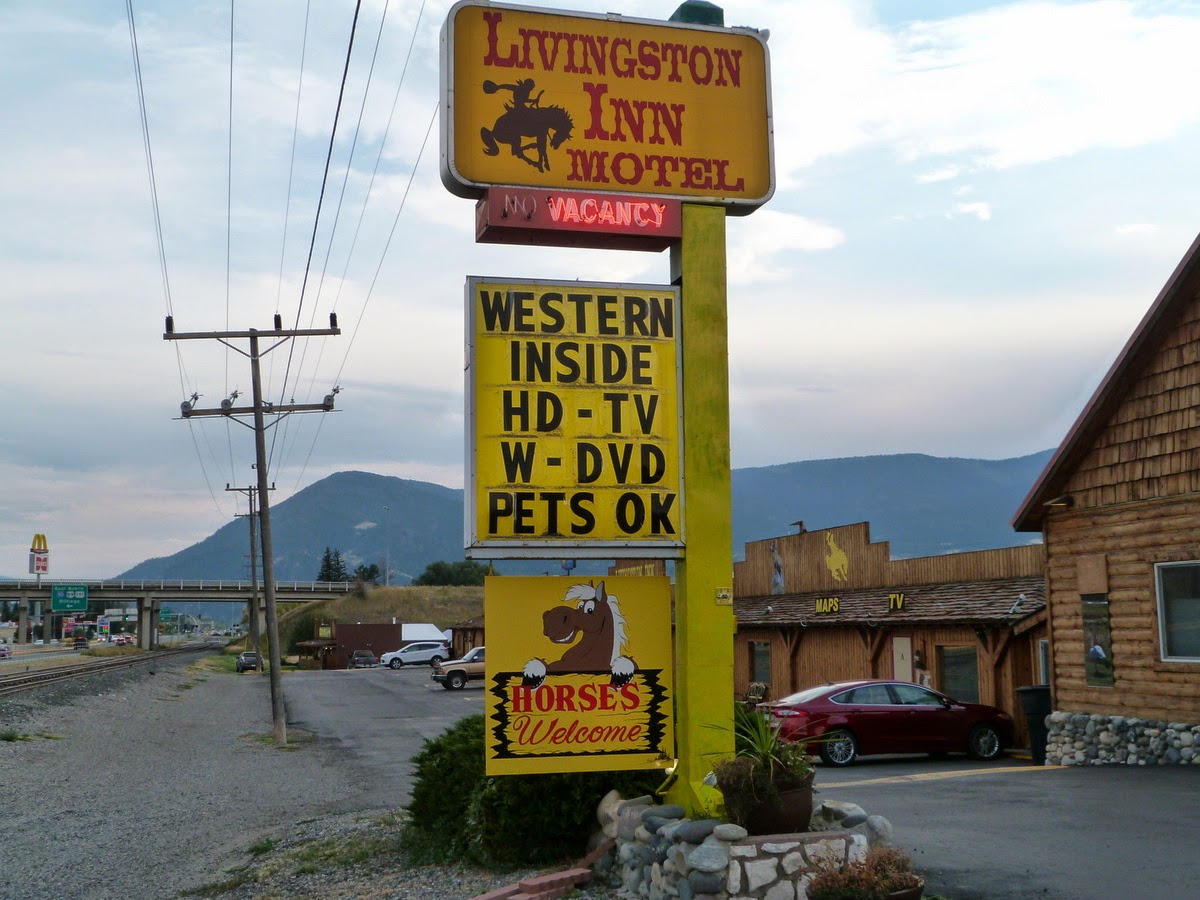 Presumably bikes are welcome as much as horses?

Before I arrived in the USA I was rather scornful of the 'Have a nice day' culture and what I thought was probably a false veneer overlying a cynical attitude.  After a couple of weeks in America my view changed completely. Almost without exception, everyone in a service job, whether shopkeeper, barman, receptionist or waitress, is genuinely cheerful, helpful and polite. Complete strangers hold the door open for you, motorists stop to let you cross the road whether or not you're near a crossing, and complete strangers say "Hi, where are you from, waddya doing?"  Shopkeepers SPEAK to you when you enter their store with a “Hi, how are you?” and when you walk out without buying anything they say  “Thanks for calling in!”

Restaurants are SO different to the UK. At home, we are often overcharged for our meals, the famous restaurateurs become rich while the staff are paid low wages and expect a tip even if they give poor service. In the States the food is much cheaper and no doubt the staff are paid even less. But the difference is that they EARN their tips by giving great service, with a big smile, and I don't begrudge them that at all.  Now I LOVE this attitude.  Give me a cheerful "Have a nice day" any time.