Rain! I woke to dark grey skies and heavy rain, which came as a bit of a shock after all the fabulous sunny weather we’d been enjoying.  Just like yesterday in the Mexican Restaurant in Gardiner, the restaurant waitress apologised for the slow service, as she was on her own.  The only difference his time was that she knew what she was doing and did everything ten times faster than her counterpart.  I didn’t notice any hold-up at all.  I began to realise that I wasn’t eating much fruit and veg.  My diet had lots of meat in it – mainly chicken, plus fries, bread and so on.  But in an effort to redress the balance the best I could manage for breakfast was three blueberry pancakes, liberally doused with maple syrup and boysen syrup (I’ve never heard of this before.  There’s the taste of Benylin in there somewhere!

Setting off in the rain we headed first for Livingston town centre, following the railway tracks as our objective was the Depot Center, built in 1902 and designed by the same architects as New York’s Grand Central (Minnesota's wonderfully named Reed and Stem).  Now closed, the building is certainly impressive, and has now been converted to a museum.  However, while we were there a huge goods train arrived, pulled by THREE locomotives, an indication of both the size of the train and the gradients involved in these parts. 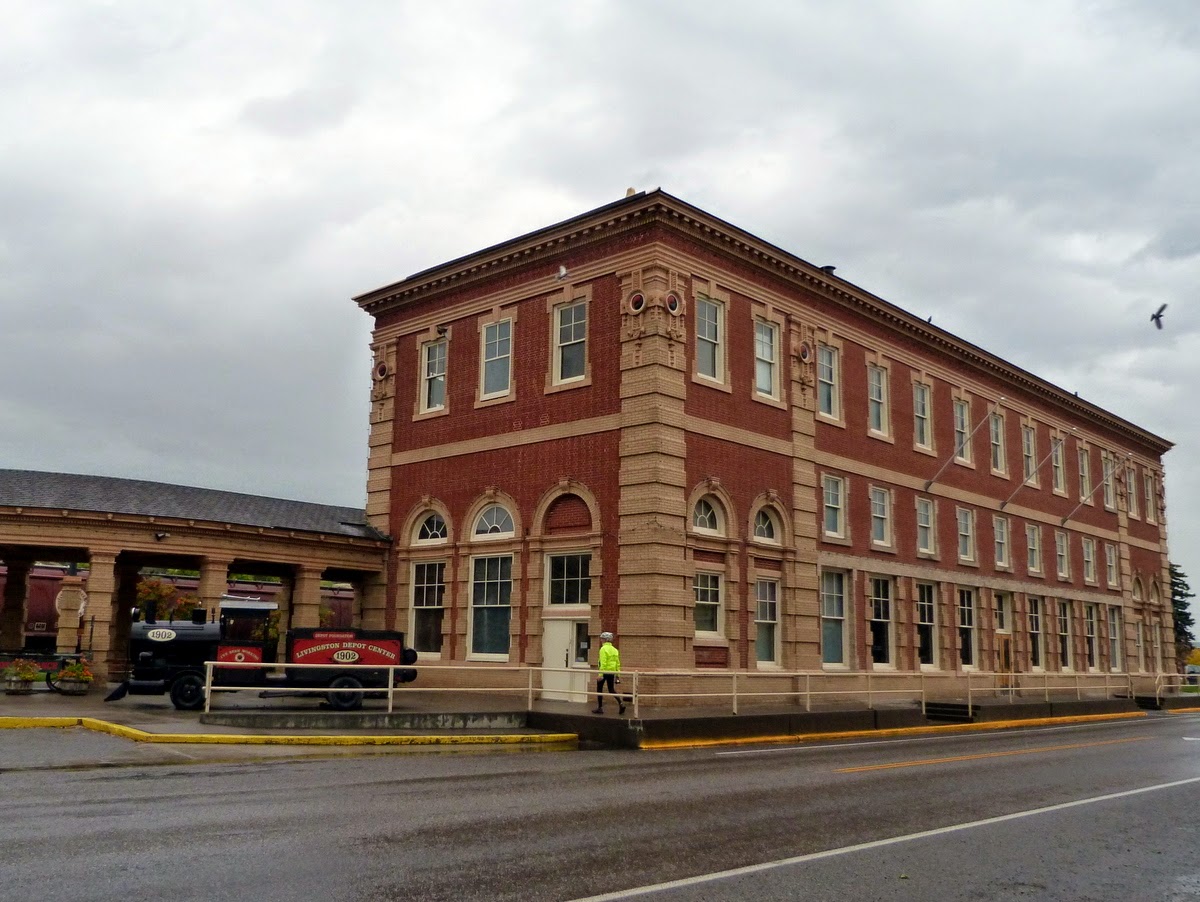 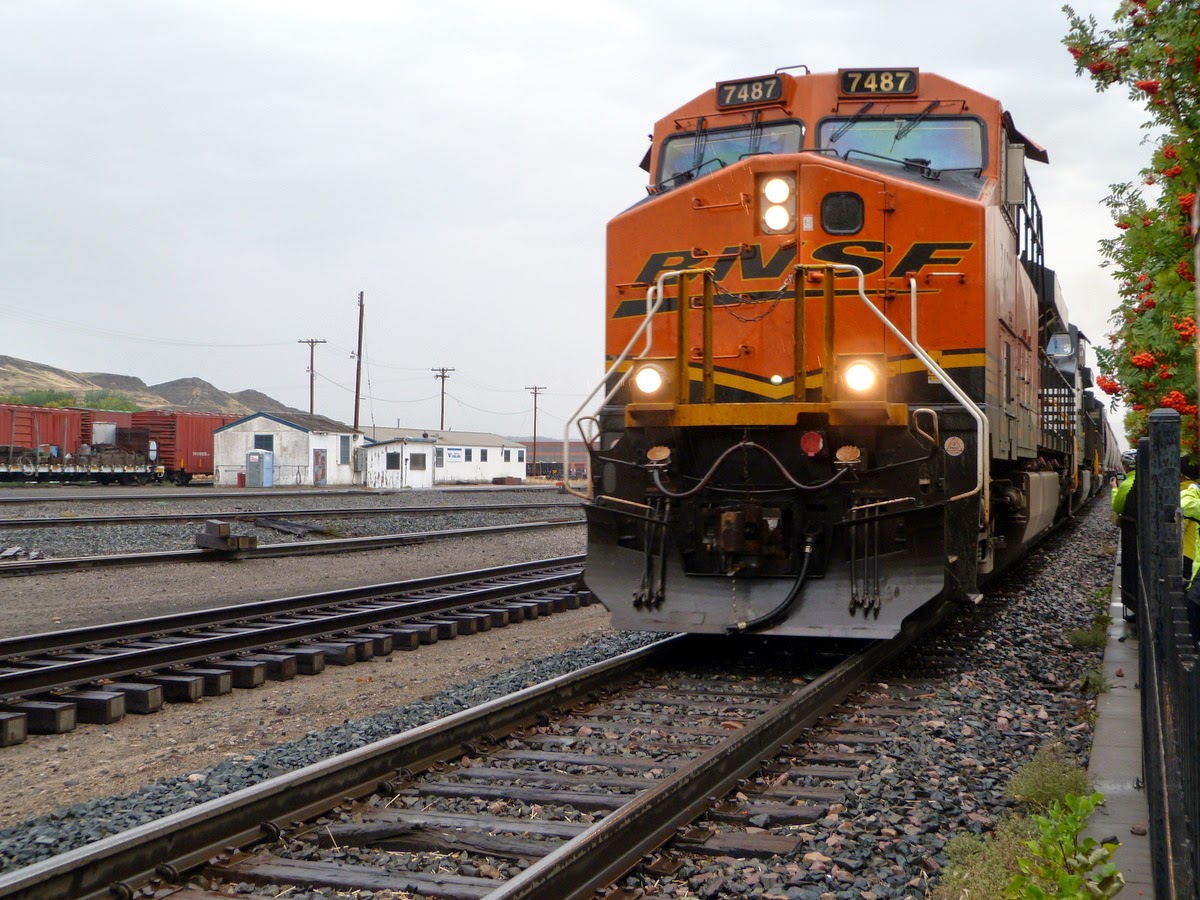 The front one of three locomotives - some pulling power!
There was a deli across the road where we stocked up on food for the day (even though it was a short hop to Bozeman), then headed out of town and on to the old road which runs parallel to the busy 2-lane freeway.  The road climbed steadily for several miles, with various items of interest to attract one’s attention including a dead Prairie Rattlesnake (I think it was dead – we poked it a few times so if it wasn’t dead it must have been a very sound sleeper); a dead Garter Snake; and a dead Coyote.  It wasn’t all road-kill, mind you – there were also American Robins, Ravens, Hawks, and lots of horses which appeared to live in an abandoned railway carriage. 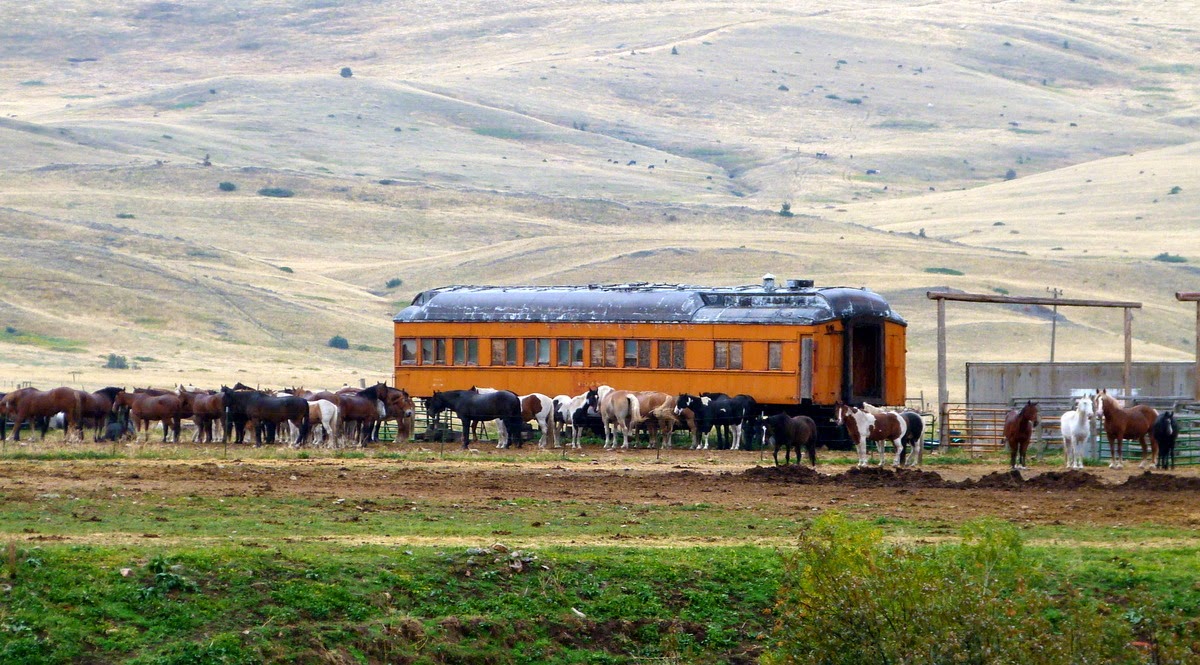 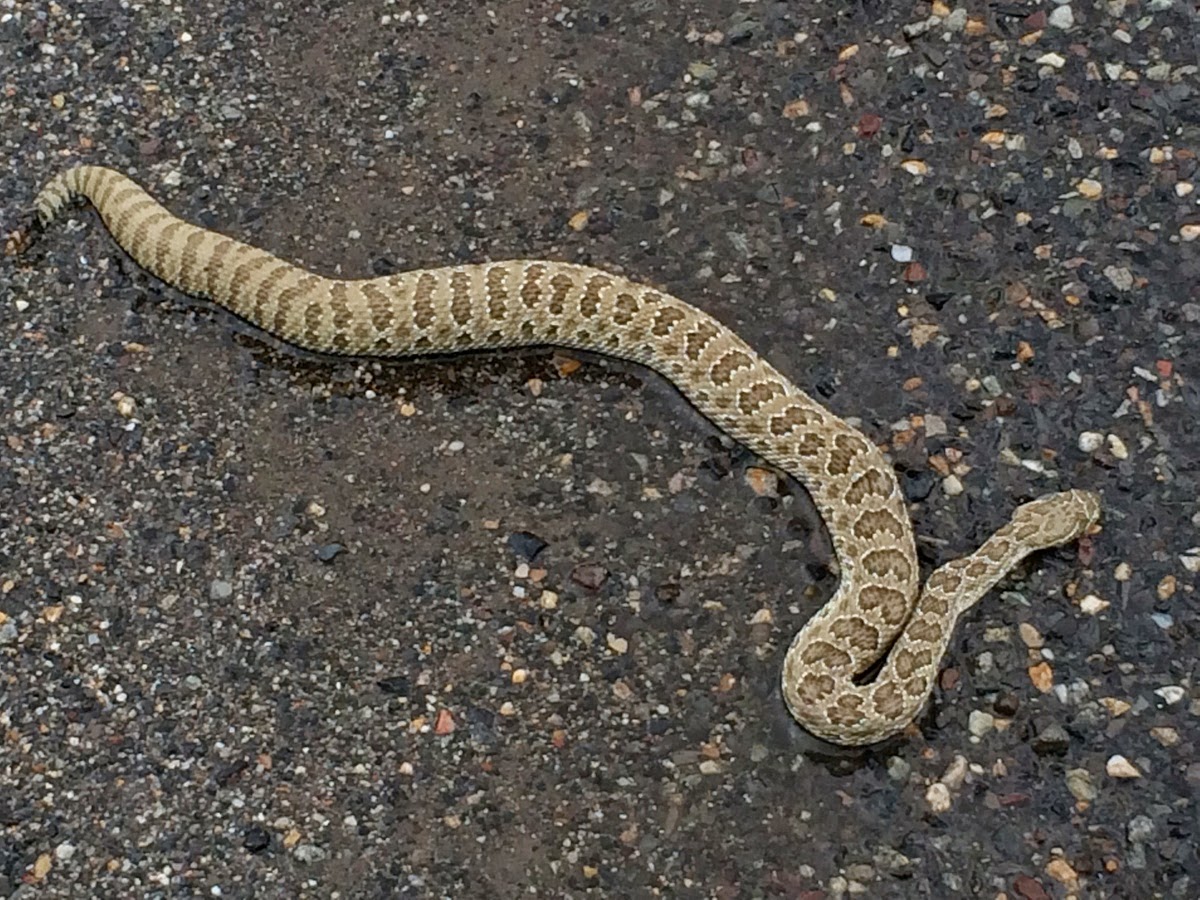 I'm fairly sure this Prairie Rattlesnake was dead...

The climb was at just the right gradient for me (2% - 5%) and I made good progress before descending at high speed to the Grizzly Bear Experience.  The rain had now stopped and some blue patches of sky were emerging, as we stopped for a look at the bears.  Reduced rate for seniors – how old is a Senior? – 62! – Perfect!  That’ll be $6.00 then.  The two 8-year old Grizzlies seemed reasonably content in their large, open enclosure, separated from visitors (aka breakfast) by a moat which was very deep and wide.  Distractions included another 3-header train going by, some very pretty Brewer’s Blackbirds, and an even prettier guide who thought we were awesome for cycling all this way and then proceeded to inform us that she would soon be backpacking through South America! 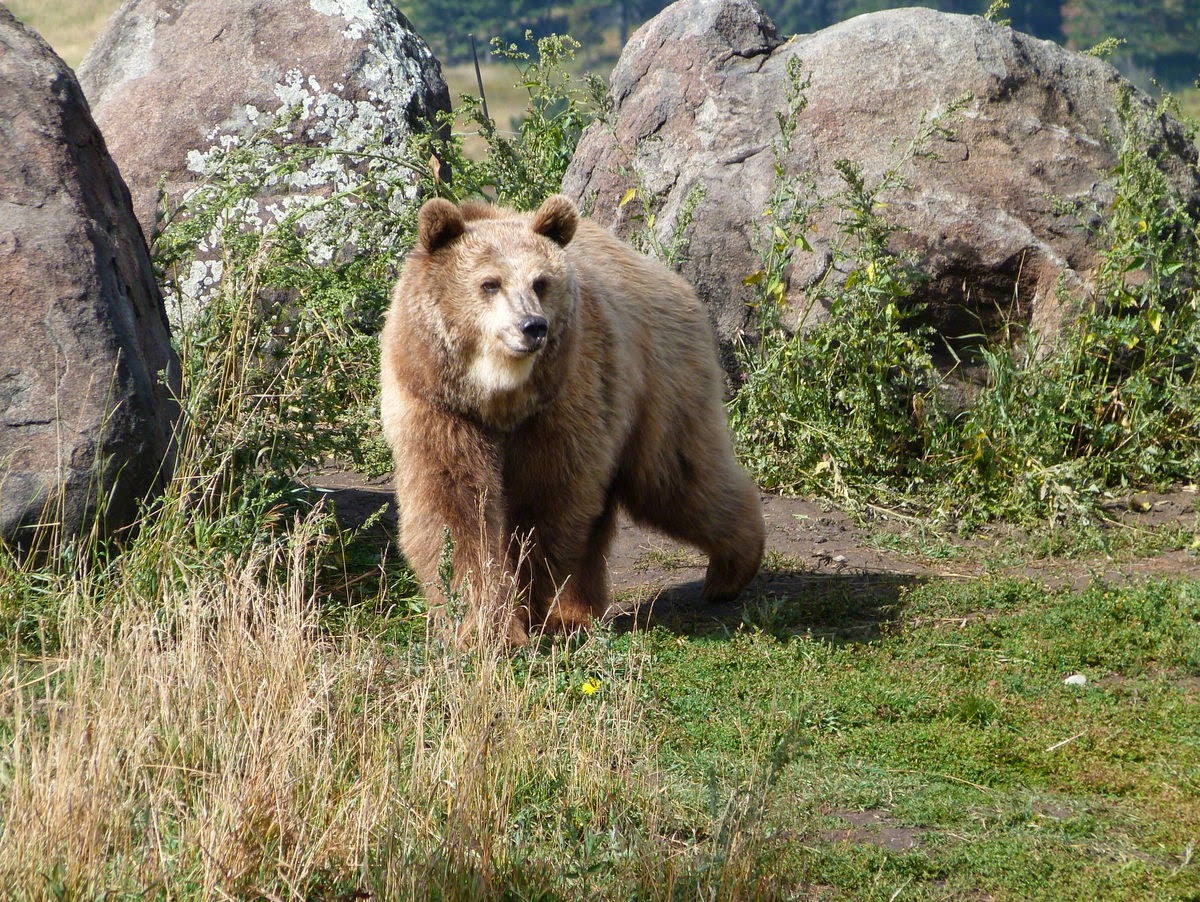 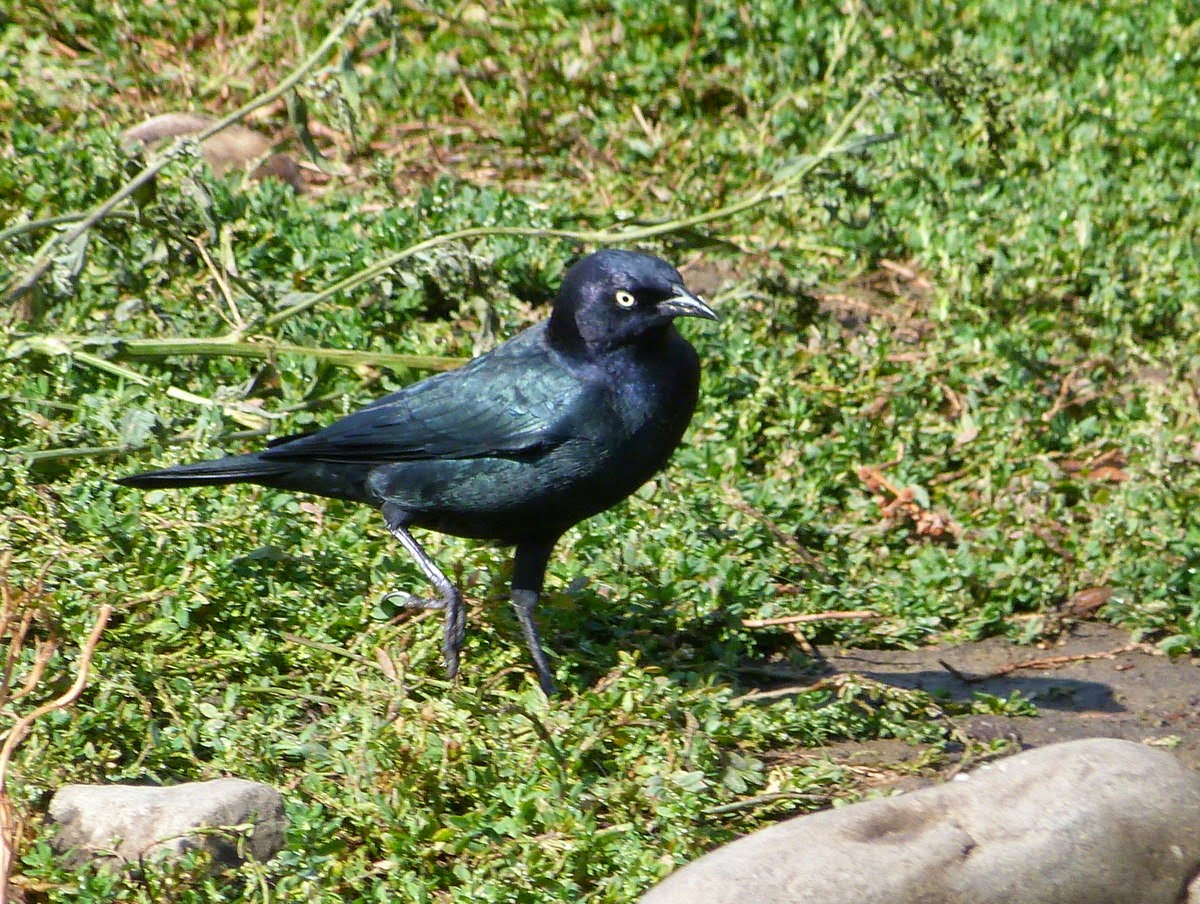 Crossing under the freeway next, we headed through undulating country at first very reminiscent of the Callander area of Scotland, climbing and descending through golden autumn colours, before passing by houses which were more Swiss than Scottish.  A vehicle parked in a field had us scratching our heads until Richard decided it must be a snow-blower. 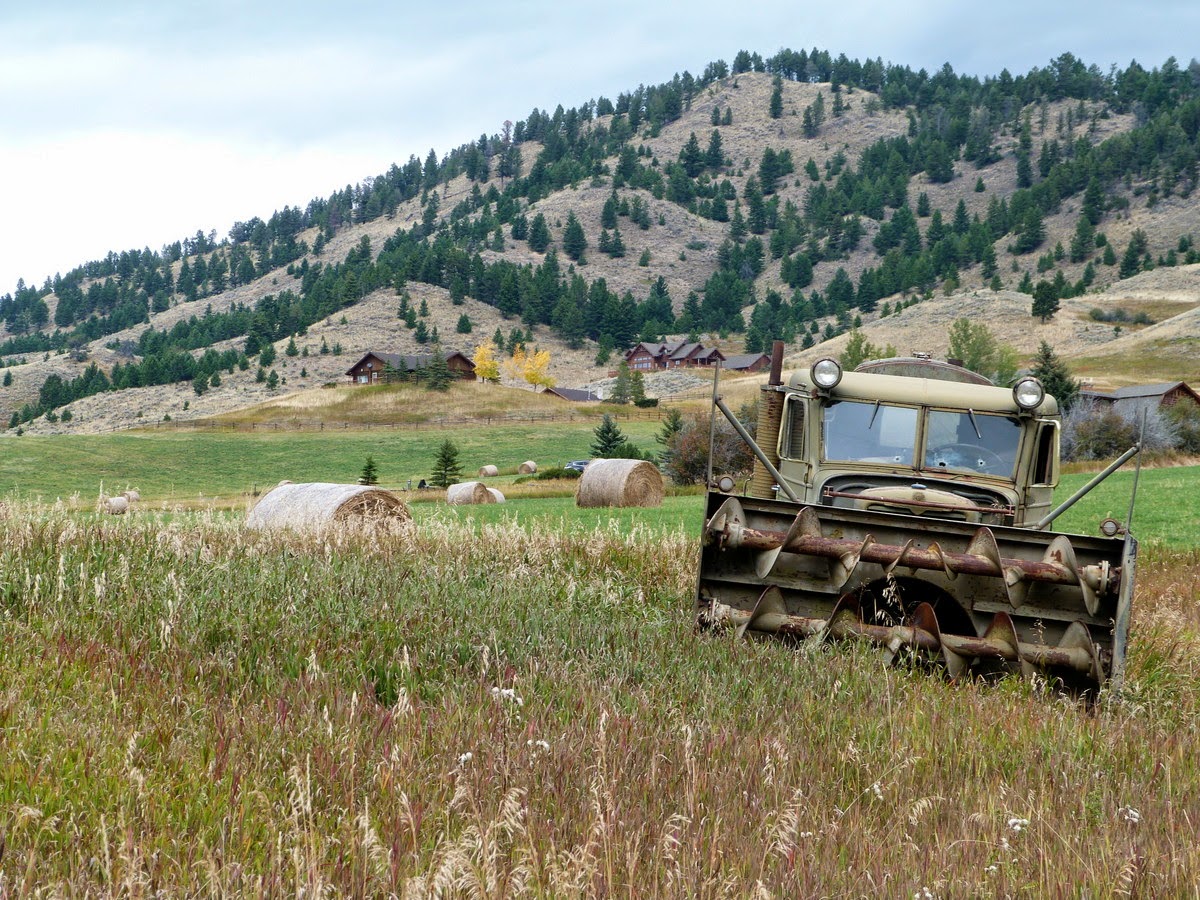 And the mystery vehicle is... a snowblower (I think!) 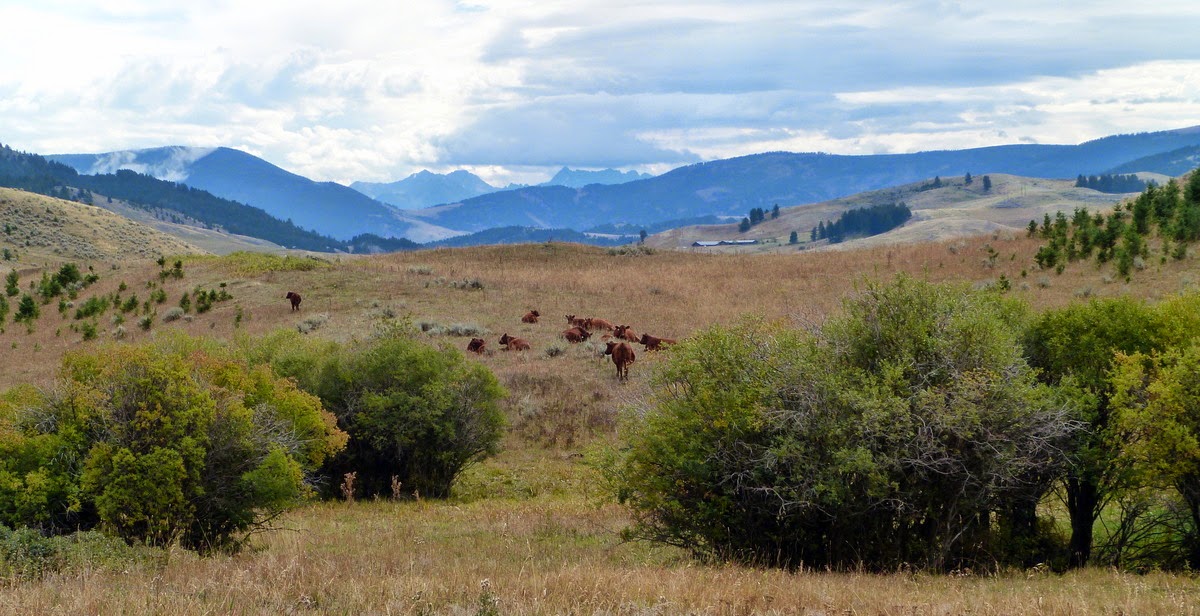 It was only early afternoon when we arrived at the largest town on the Tour – Bozeman, Montana.  We took the scenic route into town, past old grain silos and then along a gravel path to cross the railway line, before finding the town centre proper and cycling through several sets of traffic lights.  The Lewis Clark is named after two early pioneers (a bit like Mason & Dixon in the east?) and is a really classy place with 50’s piped music all day in the lobby, free snacks and even a complimentary (and tiny) glass of wine every afternoon.  The rooms are a bit odd though, opening on to the front with full width glass doors, so if you want to get changed you must draw the curtains and remain in darkness! 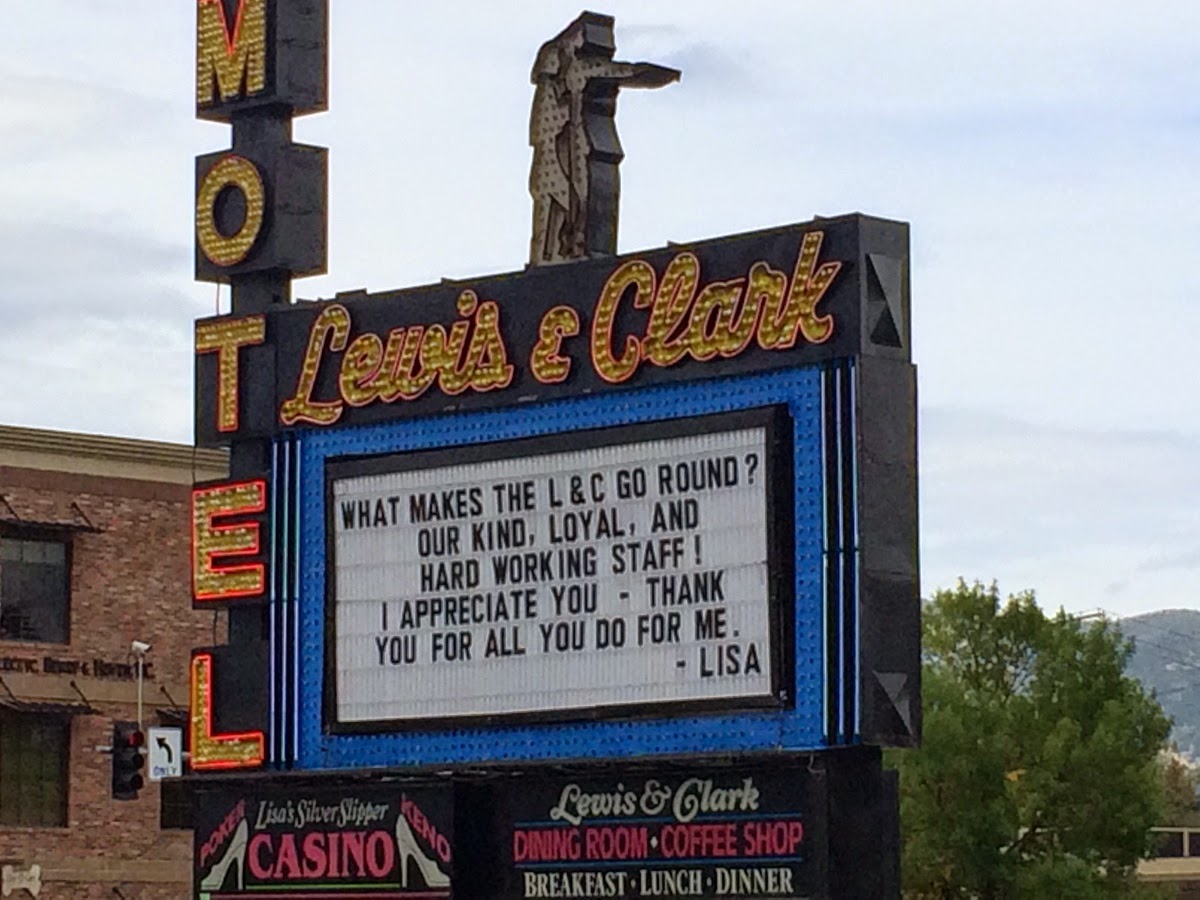 Our motel in Bozeman 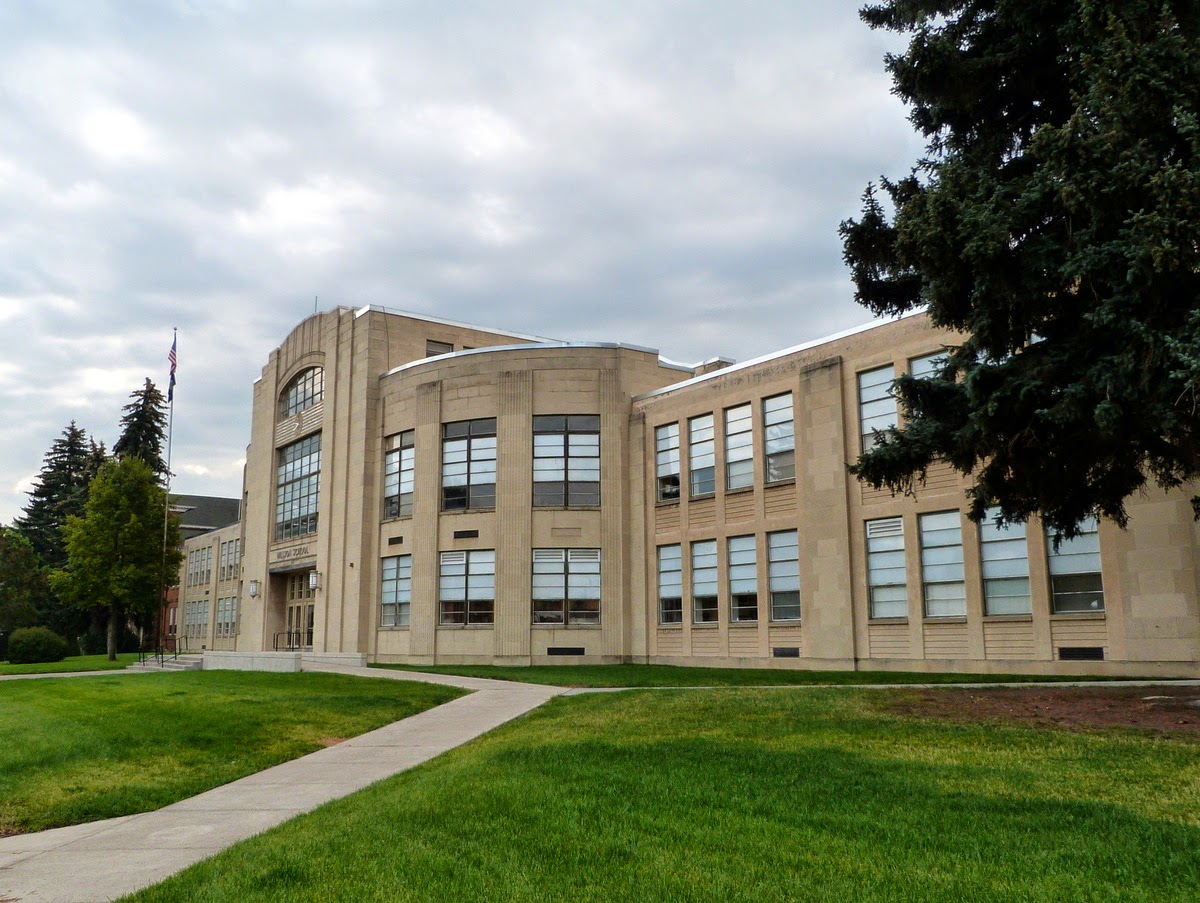 One of many distinctive Bozeman buildings

Next door to the motel is the amazing Bozeman Co-op.  Every kind of food for sale including rows and rows of bottles and jars – weigh out what you want and take it to the checkout.  And they even have proper Yorkshire Tea.  The town centre boasts lots of stylish buildings, including some from the art deco period, and of course plenty of choice for dining out.  By evening the weather was back to dry and pleasant, and we could relax ahead of our final ‘rest day’ tomorrow. 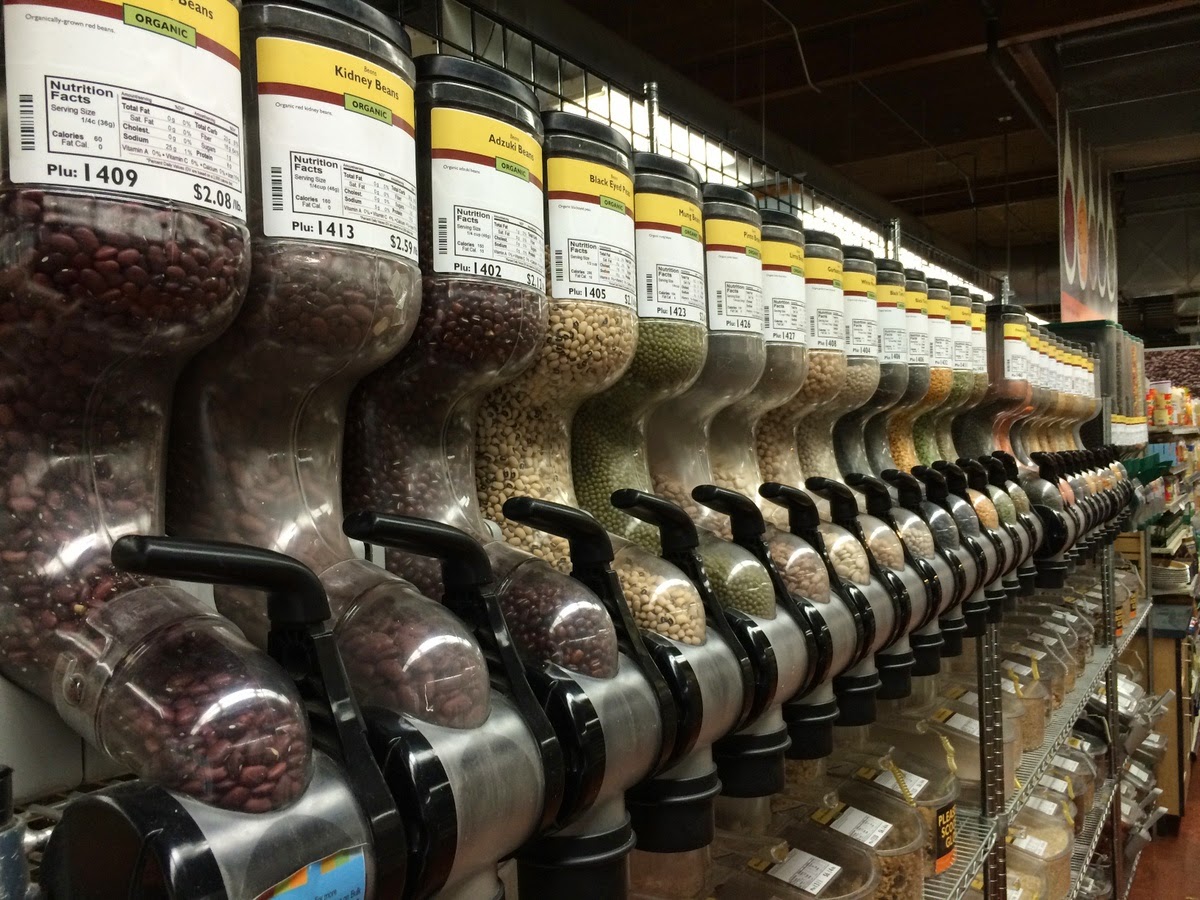 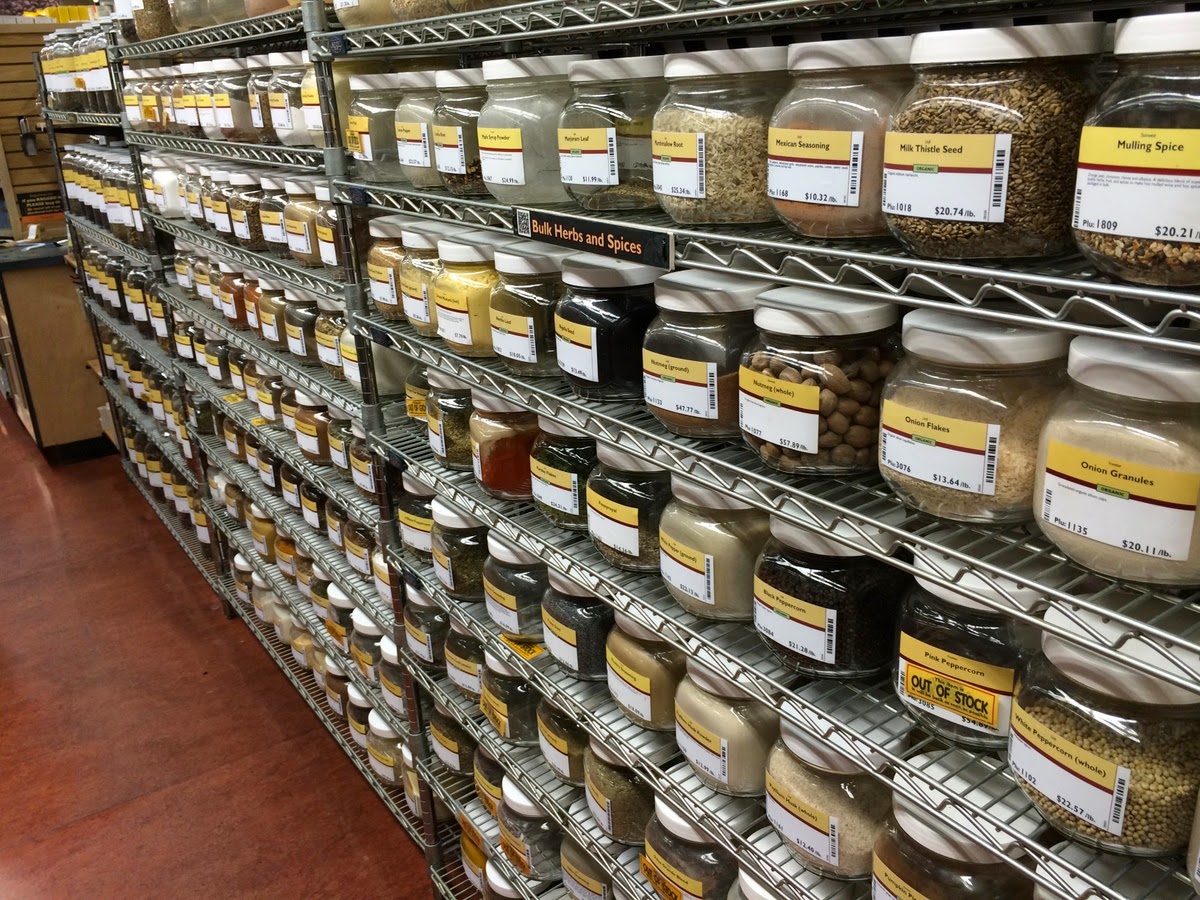 The impressive Bozeman Co-op, which even has... 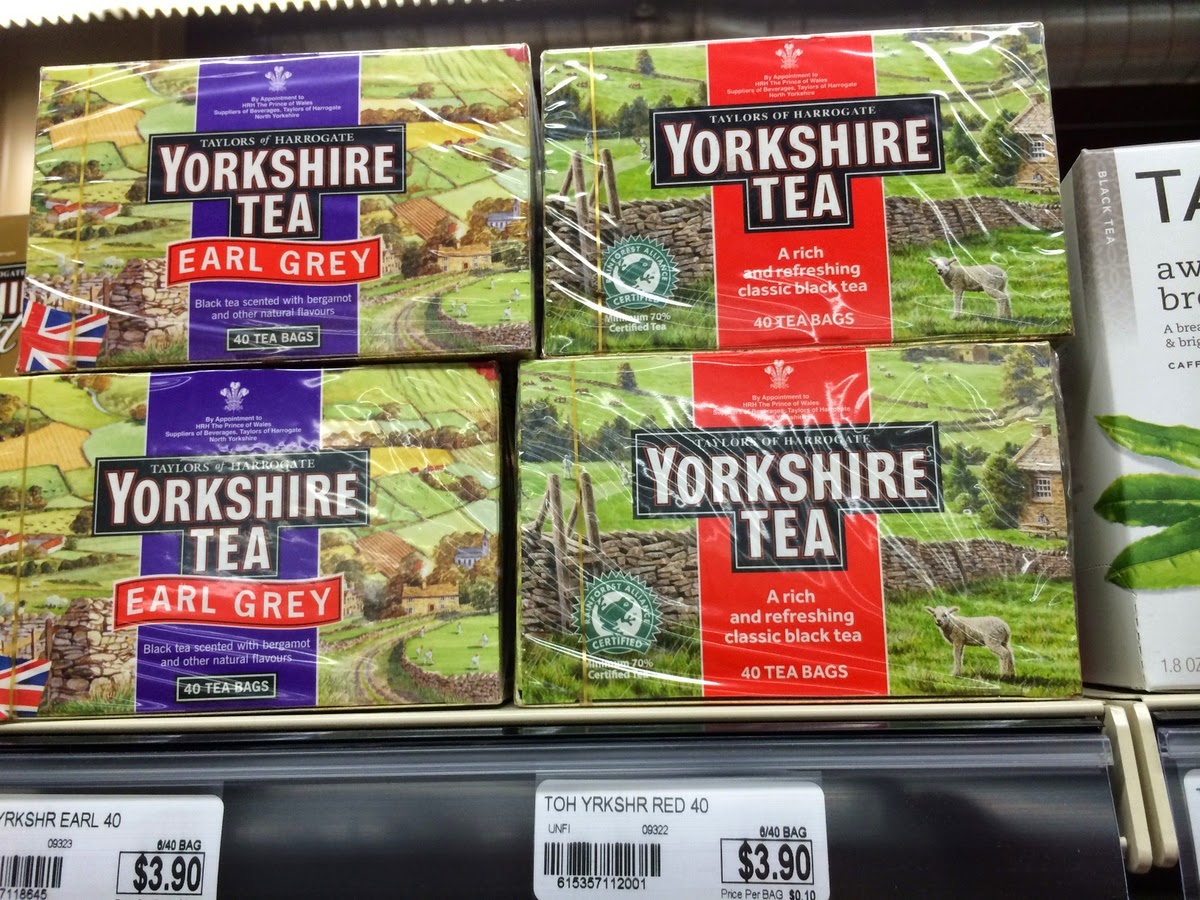 You may be wondering about laundry.  Cycling with panniers demands a certain economy when it comes to packing clothes, yet the effort of cycling can produce a good deal of perspiration.  The answer?  When you arrive at your motel or cabin, the first job is to have a shower.  Off come the cycling clothes, which are placed in the shower tray.  Liberal amounts of shampoo and shower gel, combined with something rather like a Native American Rain Dance (otherwise known in Lancashire as ‘possing’) combine to get the clothes clean again.  After a rinse and firm wringing, and after drying oneself, the said clothes are then rolled up one-by-one in a towel and wrung again before placing near a radiator on coat hangers.  The great advantage of NW America at this time of year is that the humidity is so low (usually around 25% - 35%) that everything dries overnight.  On the rare occasion that it's not completely dry, it goes on the rear saddlebag to be sun-dried in a breeze of one's own making.  Simple.  It’s a routine one gets very used to!