We’d been warned by those on last year's Tour that this would be a gruelling day, which might even finish in the dark.  It wasn’t just the distance, but the amount of climbing involved - around 3,000 m (10,000') that would make it so tough – not helped by the fact that we were loaded with all our belongings in panniers.

So it was that we were up at 5.30 am ready for breakfast at the Irma Hotel’s ‘opening time’ of 6.00, with bikes loaded up and ready to go.  On duty already, cleaning (I think) was the most striking-looking guy with long hair, beard, moustache, and totally, completely, unkempt appearance.  It was impossible to guess how old he was, but I’d put my best estimate at between 40 and 75.  His reply, when he learnt we were going to Cooke City on bicycles in one day was “Sweeeeet.  Reckon I’m too outa shape for that kinda thing now.”

The sun rose 10-15 minutes after I left town, after cycling past industrial areas and out into the countryside on a steady uphill slope, where a Mule Deer crossed the road and ‘stotted’ in the field on the other side.  Stotting is when deer or antelope bounce up and down on all four stiff legs – I don't know if you've ever seen it - apparently to show potential predators how fit they are and suggest that it isn't worth chasing them.  I rode with Kathryn for a while, past Magpies (which look the same as their European counterparts but sound different – another species with a different language on each side of the Atlantic), but she had her mind set on making good progress and soon left me behind.

The road out of Cody

The trucks are big out here

I carried on uphill until the 300 or so metres of height that had been gained were all lost as the road plunged downhill for a few miles, before turning left on to the scenic Chief Joseph Highway route.  The day was now gorgeous.  I passed Kathryn whilst she was enjoying a short rest, then the big climb started:  she came past me again at a turnout where there was information on the Nez Percé people.  Just afterwards we saw our first Pronghorn Antelopes away to the right on the far hillside, and then Kathryn disappeared into the distance, not to be seen again until the end of the day. 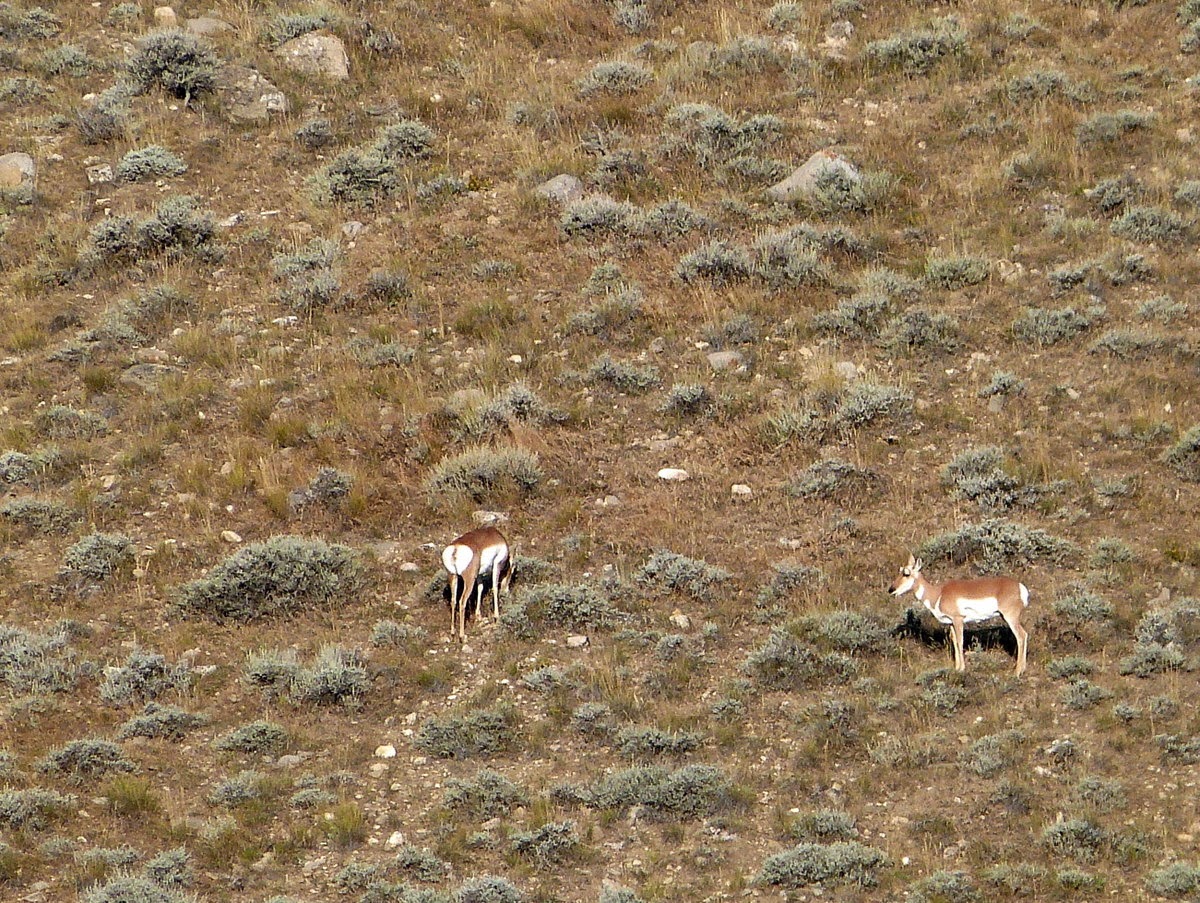 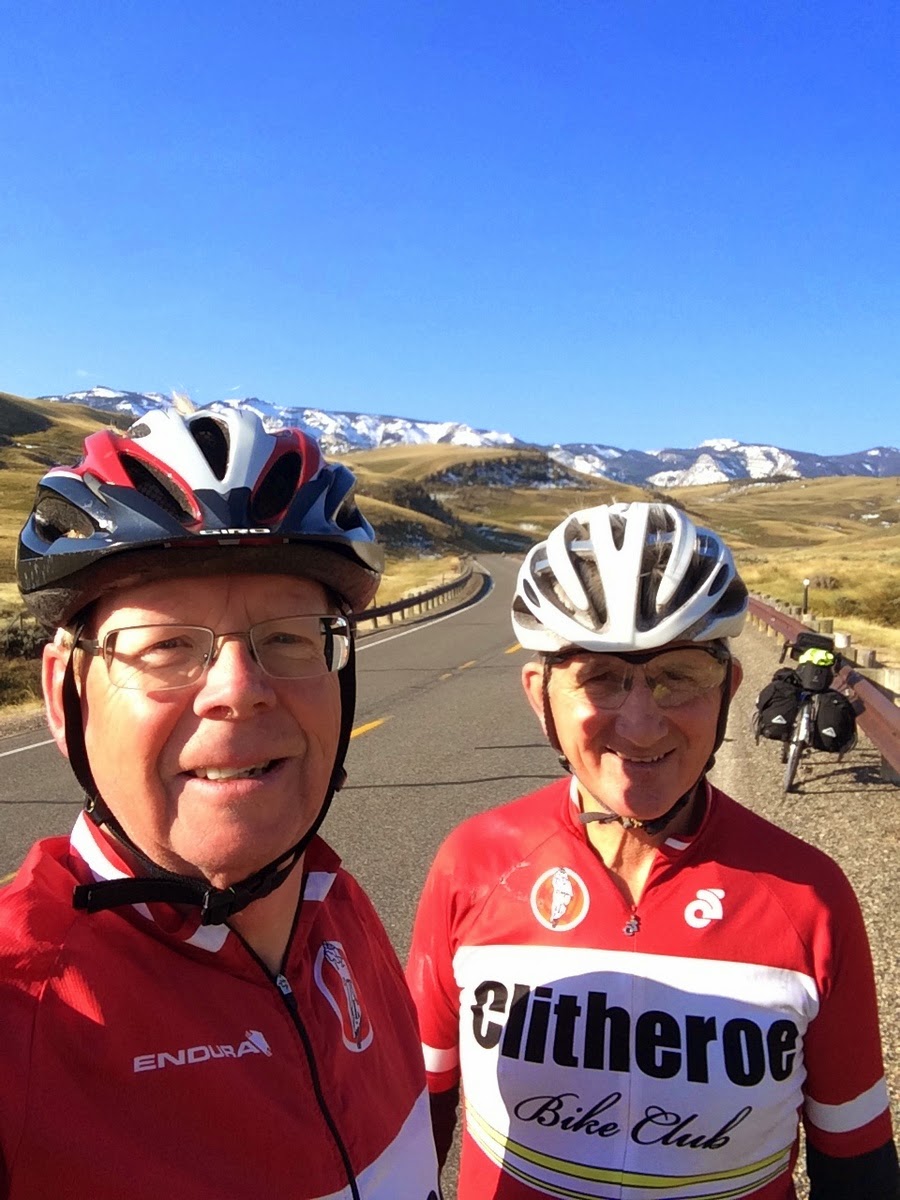 A rare selfie - the author and Richard Dugdale

The climb went on and on and on.  Western Meadowlarks were singing on roadside fenceposts (very melodious) and a few late Swallows flew south.  As usual, I kept stopping to take photos, and Joy, Richard and Helen all caught and passed me, but we were obviously keeping to a very similar pace.  There was a fair bit of tourist traffic (cars and RV’s) but also lots of long-bodied lorries which I think were carrying stone.  On and on, up and up, until there was snow at the roadside.  A couple of miles from the top, Richard and Joy had stopped for something to eat, but I pressed on for the summit of the climb, 14 miles from the start and 1,000 metres higher. 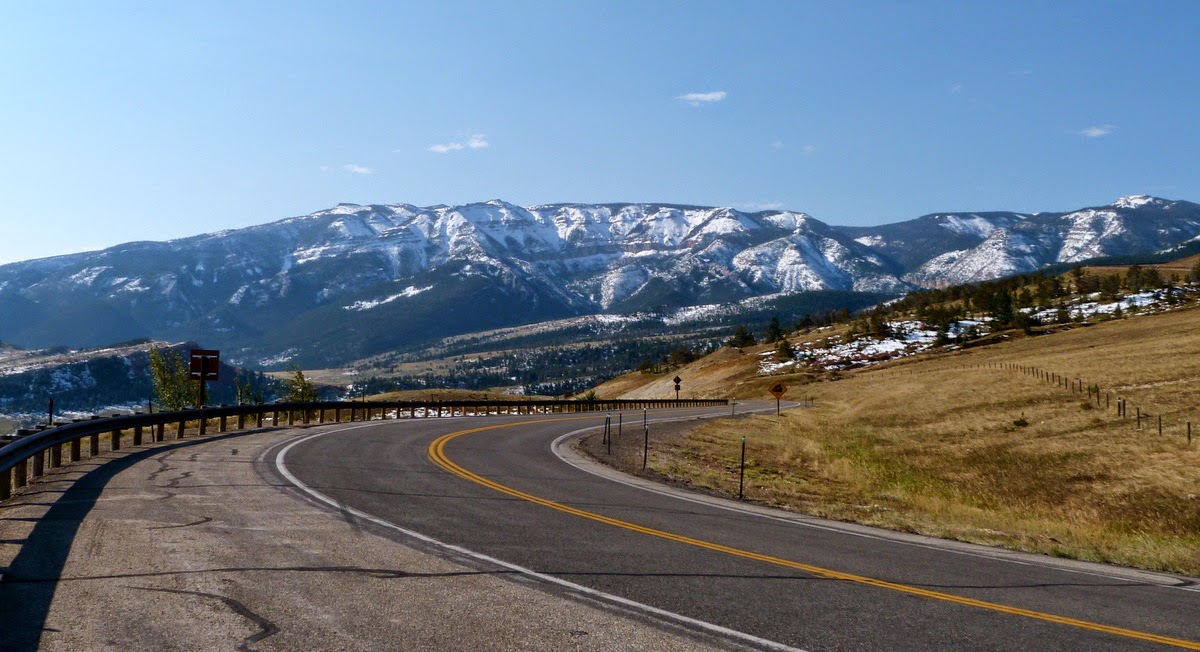 On the Chief Joseph Highway, heading up to Dead Indian Pass 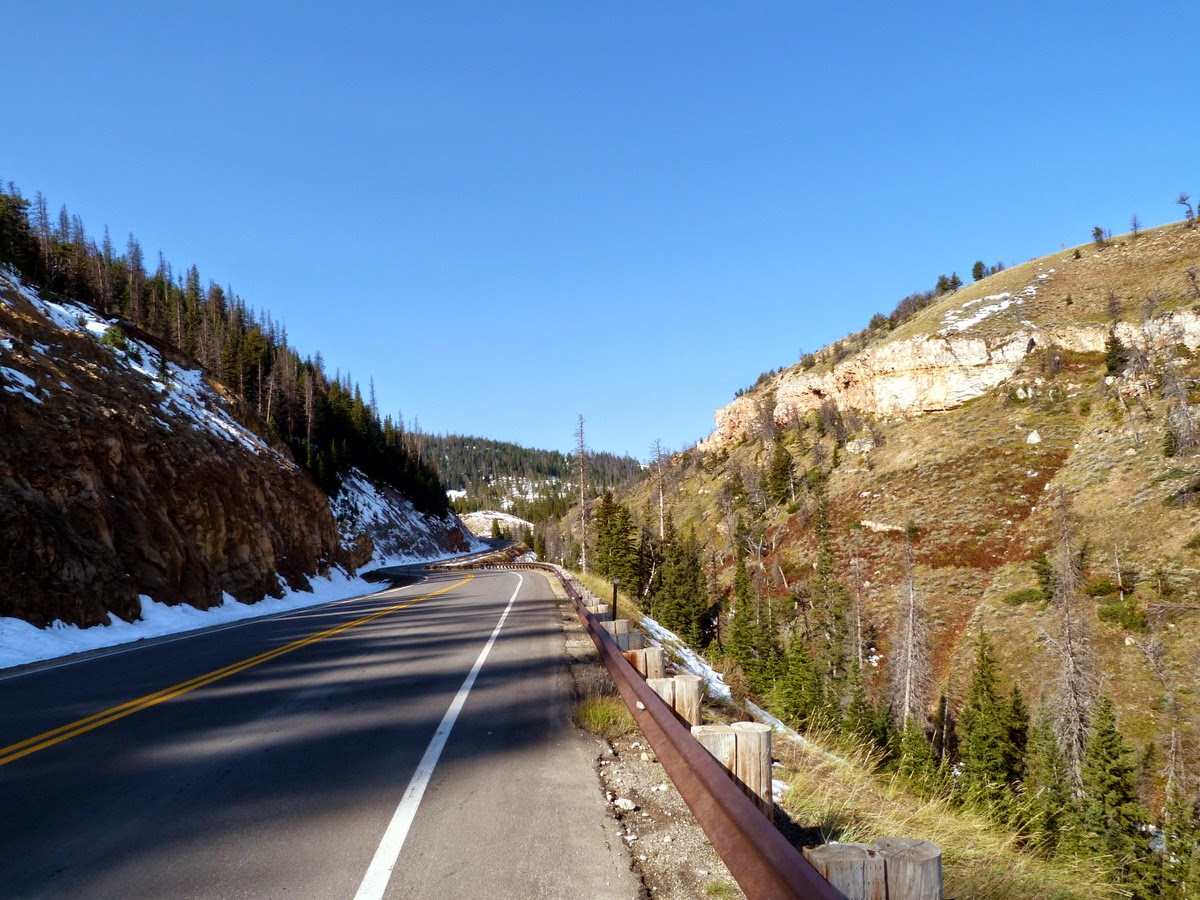 Getting closer - and colder with the altitude

At the top – the wonderfully named Dead Indian Pass – there were Chipmunks – emboldened by the food no doubt constantly available from tourists, and tourists – mainly Chinese, taking photographs of everything and more.  The views were phenomenal.  I had a quick bite to eat, shared some dried banana chips with a Chipmunk and then set off on the long descent, where at one point another Mule Deer gave me near heart-failure as it almost crossed the road right in front of me. 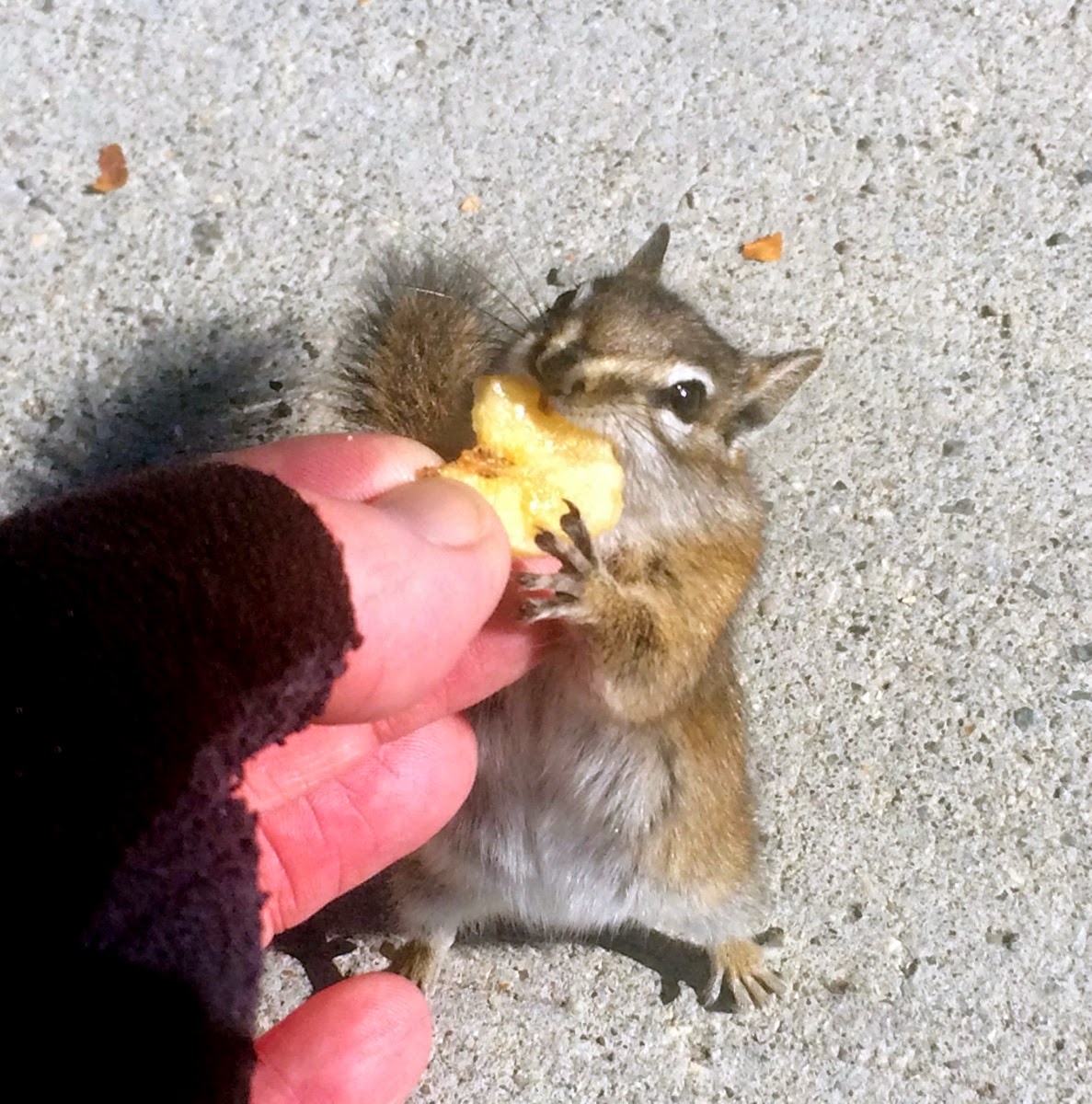 Sharing a banana chip with a Chipmunk 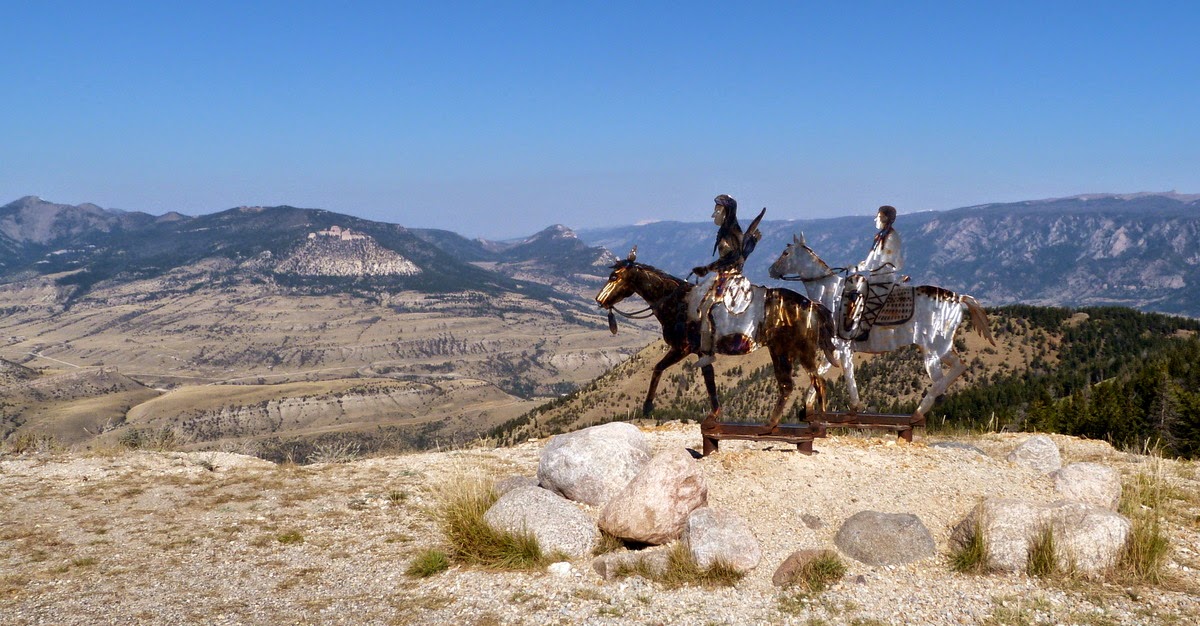 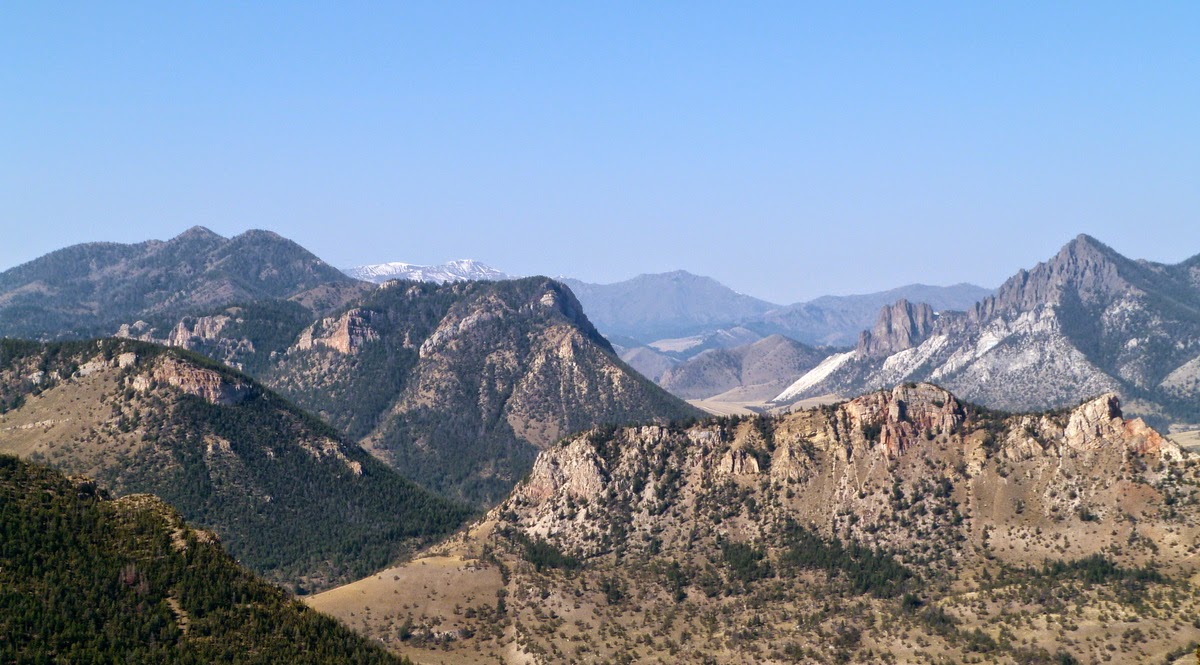 ...and the view's not bad either 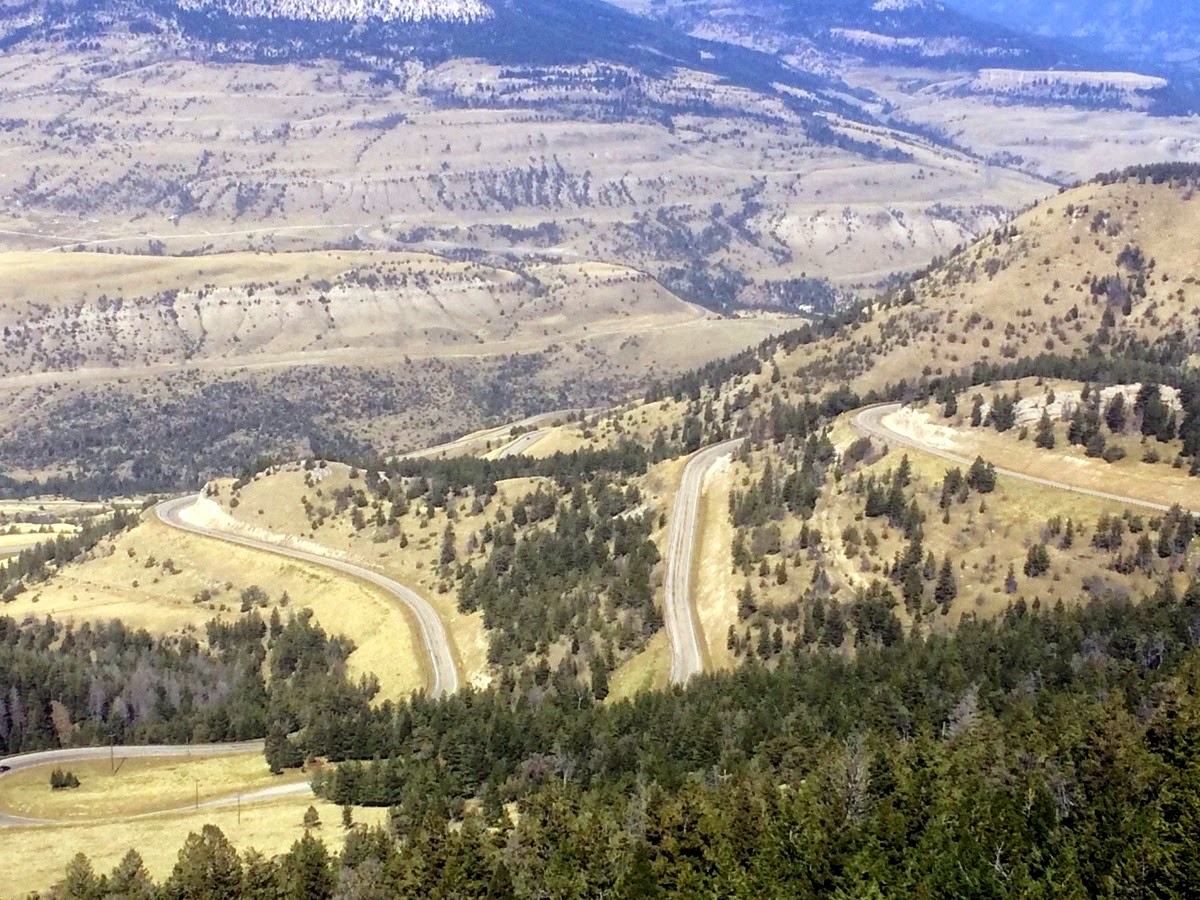 Looking forward to whizzing down this bit

Now the sun was really warm as the road undulated through areas of fields (with hundreds of glacial erratics – big random boulders transported, and then dropped, by glaciers during the last ice age), past a ranch with two horse-riding cowboys, and then a lunch stop in a lay-by with Richard and Joy.  As I went for a call of nature, Richard decided to lie down on the tarmac for a rest.  Just as I returned, a car came past:  the driver quickly stopped to ask me if he was OK and whether we needed an ambulance.  He took some convincing that this was normal behaviour for Richard!  "Jeez, tell him we called the ambulance! And the Sherriff!" 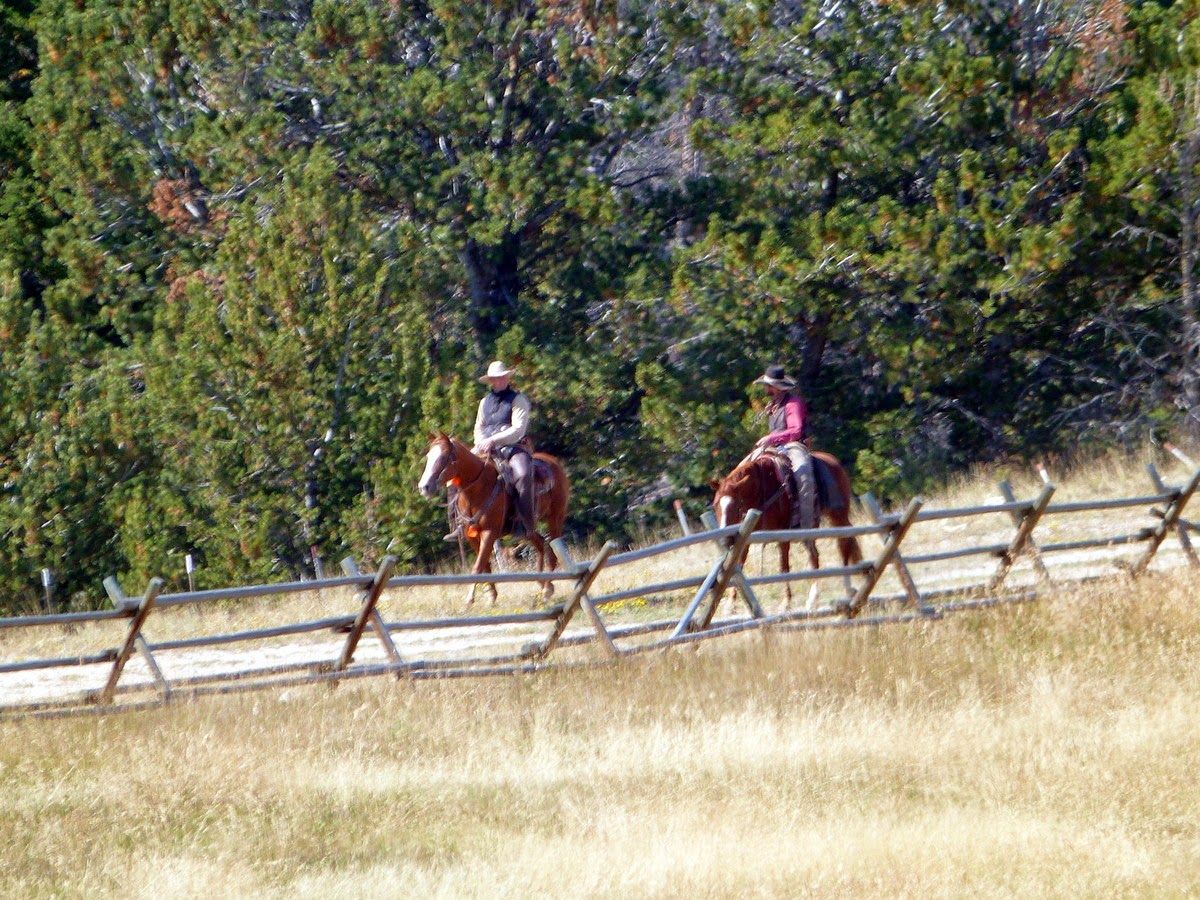 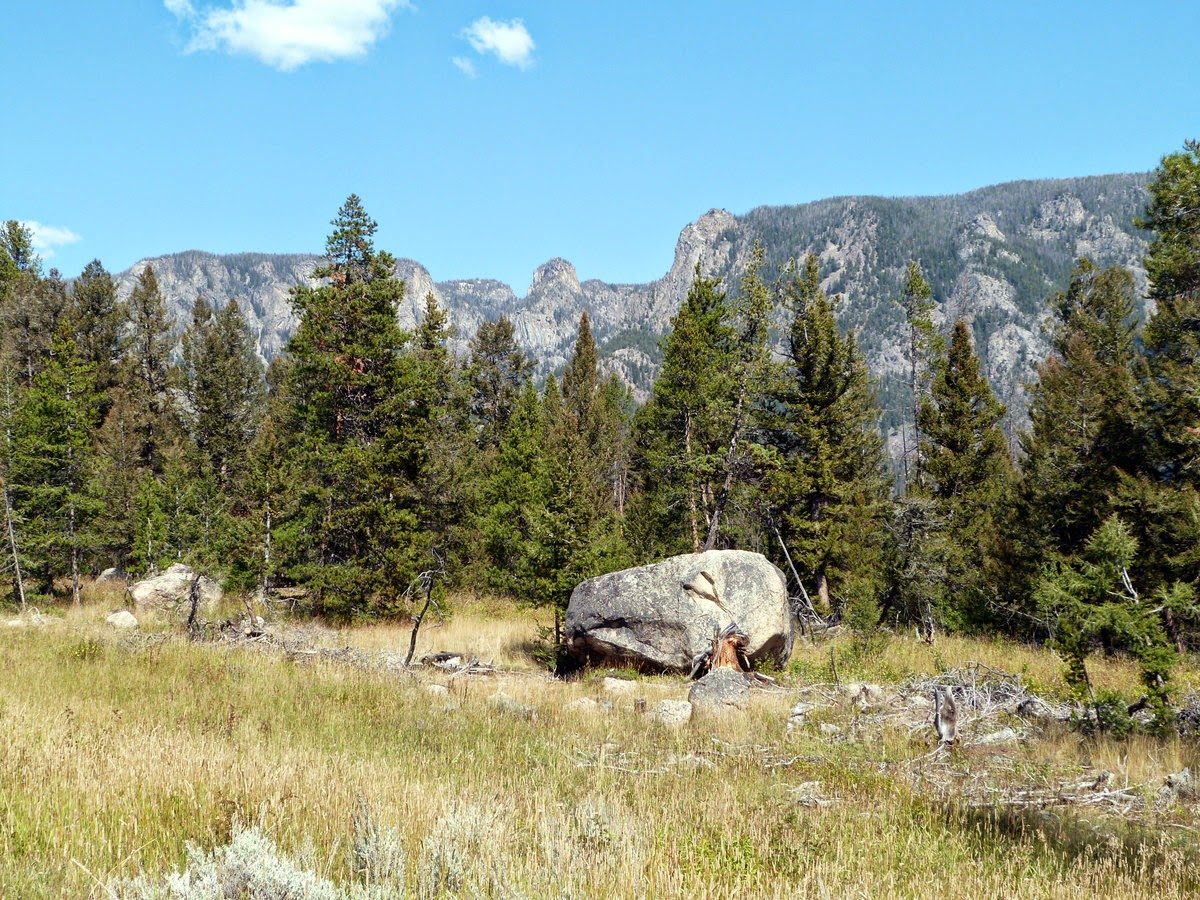 One of thousands of glacial erratic boulders 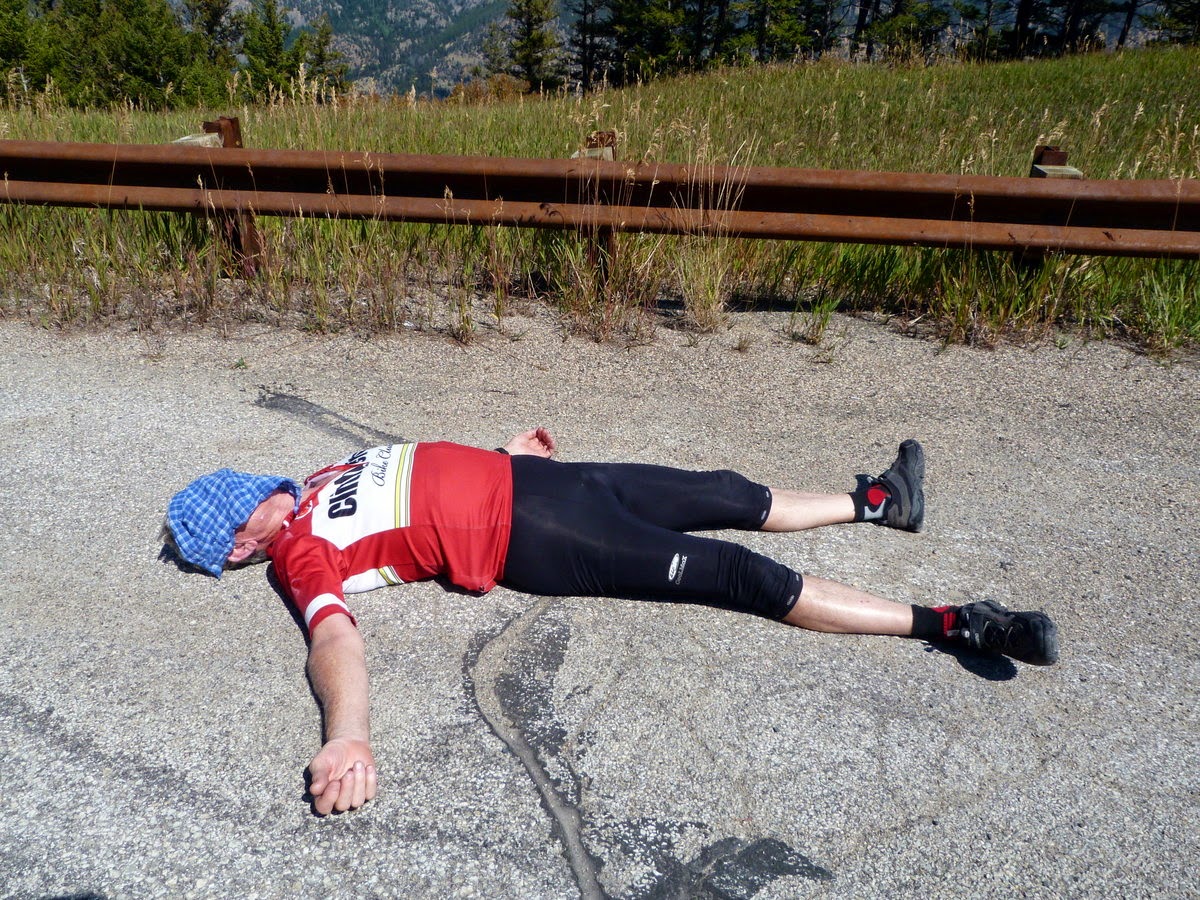 Mr Dugdale takes a nap, to the consternation of passing motorists

Now a headwind picked up and it was quite a battle to keep going – past forests, small lakes, glacial features, rivers – but no big animals – until after 55 miles and now behind Richard and Joy, I arrived at Crandall (not even big enough to be a hamlet!), where a ‘CLOSED’ sign on the café belied the fact that it was really open for business.  Coffee, a Twix, and water refill.  I have to say this was neither the busiest nor the most welcoming of places we stopped at on the tour.  The sign said closed, the doors were open, but I think in their heads they'd closed for the season!  Only 22 miles to go and still only 2.30 pm.  But it was clear that these 22 miles would be hard going.  And totally solo.

Undulating again, through grand scenery of rivers, granite, and then the distant Beartooth Mountains came into view.  After 12 miles I joined the great Beartooth ‘All-American’ Highway which runs East - West from Billings to Cooke City:  at the junction a farmer with a cattle truck opened his arms wide and said ‘Ah couldn’ even DREAM of pedallin’ that road!’  Chapeau then! 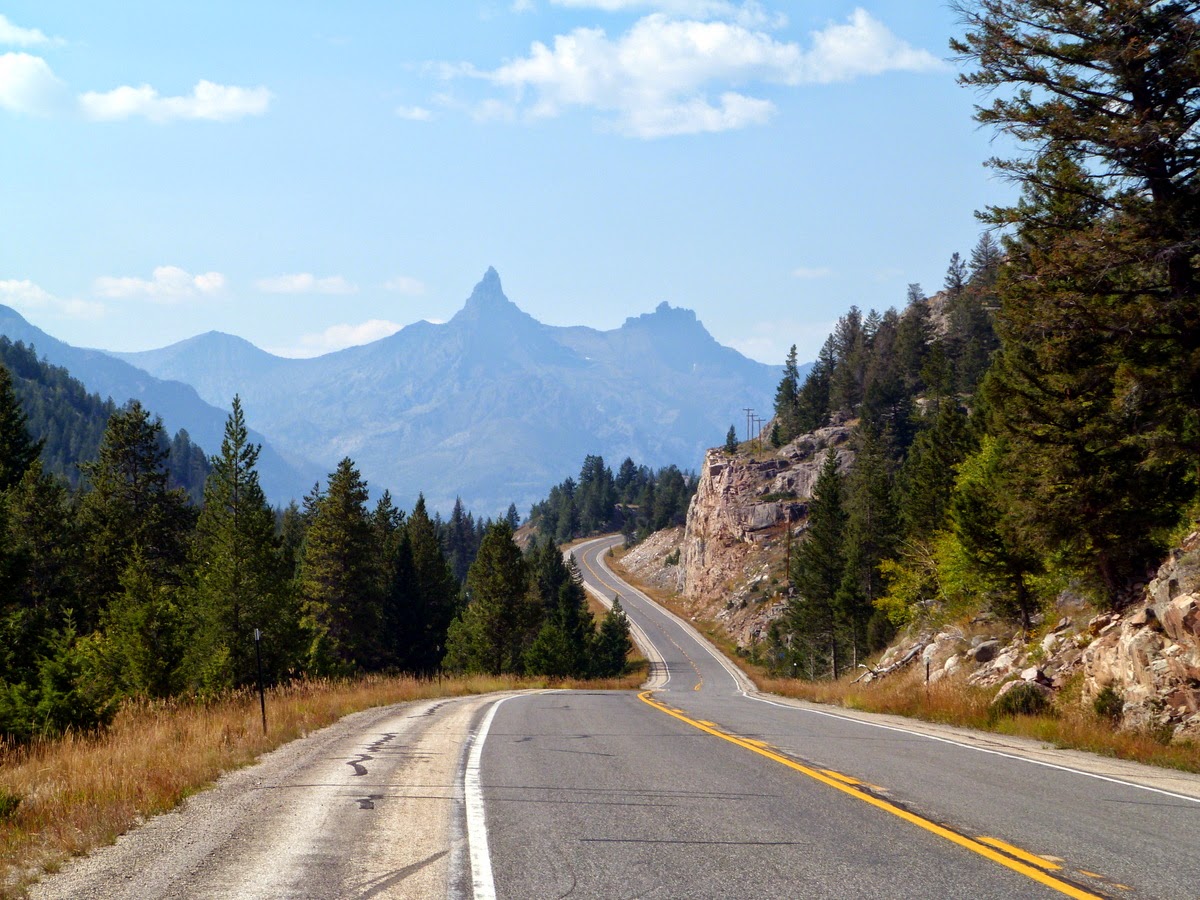 Spectacular scenery on the All America Beartooth Highway

Four miles from the end the road kicked up for a final climb of  350 metres over two miles – cruel, hard going, a steady grind up to the Wyoming – Montana border at the top, before a final sweeping descent to the amazing Cooke City – population 100 (why would you call it a 'city'?) – not necessarily a one-horse town but definitely a one-street town!  The buildings had a real wild-west feel about them, with boarded facades. 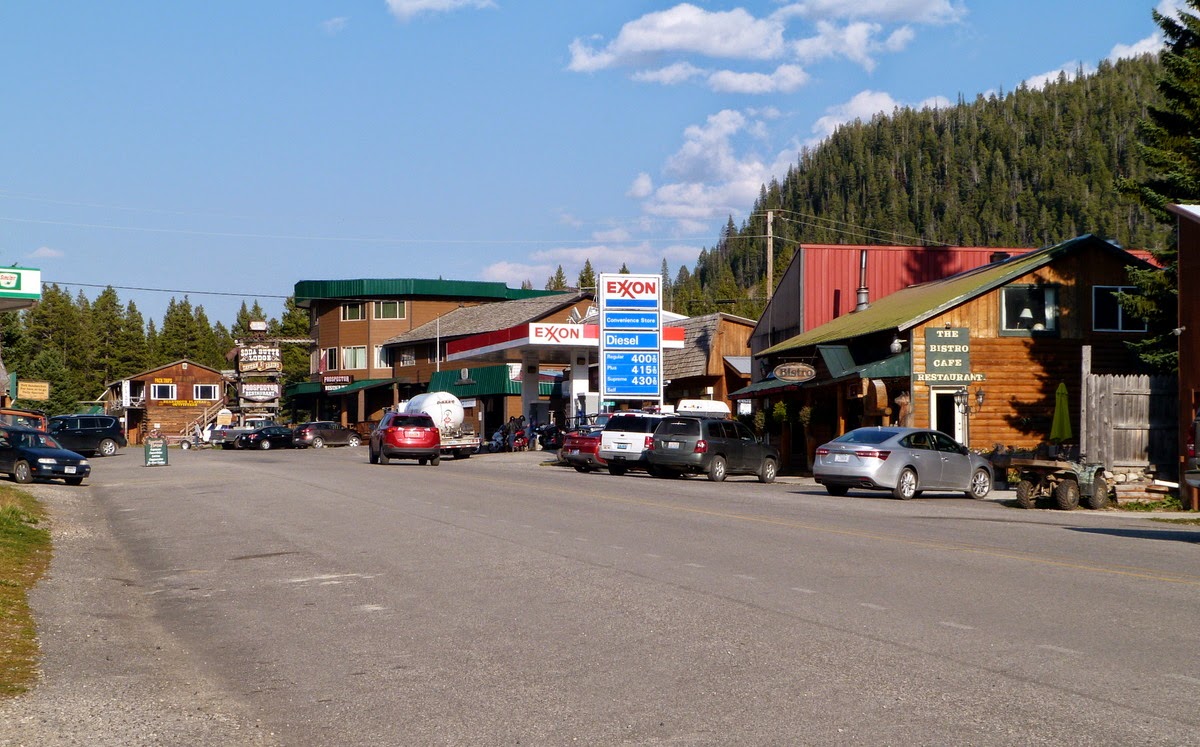 After checking in at the Alpine Motel around 6.00 pm (Kathryn had been there since 4.30!) it was across the road to the Miners’ Saloon for a beer and then an evening meal – there were plenty of calories to replace before tomorrow's ride back into Yellowstone along the top wildlife route in the Park!