Boy! Was it COLD first thing! At least -7° - and it felt more like -10°: as we assembled after breakfast Andy’s drinks bottle had grown a big icicle and at just the right angle, against the sun under a blue sky, you could see an absolutely magical shower of tiny, tiny ice crystals falling like rain, yet they were so small there was no sign of them as they landed on your clothes or on the ground. 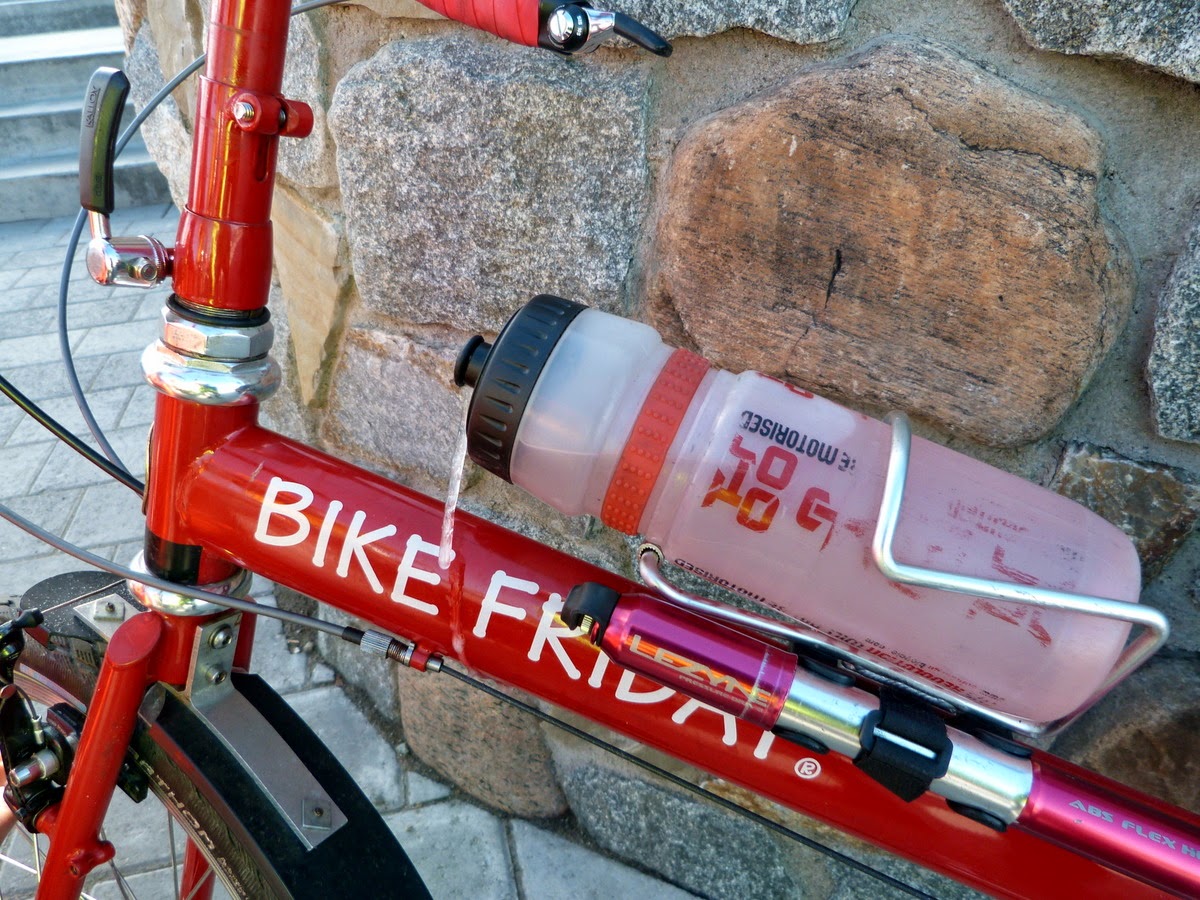 Wrapped as well as possible against the cold, we set off from Canyon Village, cycled past a frozen-looking Bison on the edge of the village and headed (past a few more Bison) to the South Rim Road.  We’d decided to detour along here as far as Artist Point where there is a superb viewpoint of the Lower Falls, made even better today by the clear conditions and the fact that the low sun was directly behind us.  I was surprised how many tourists were already there at this early hour (presumably their guides knew that this was when the light was best, as many were in coaches). 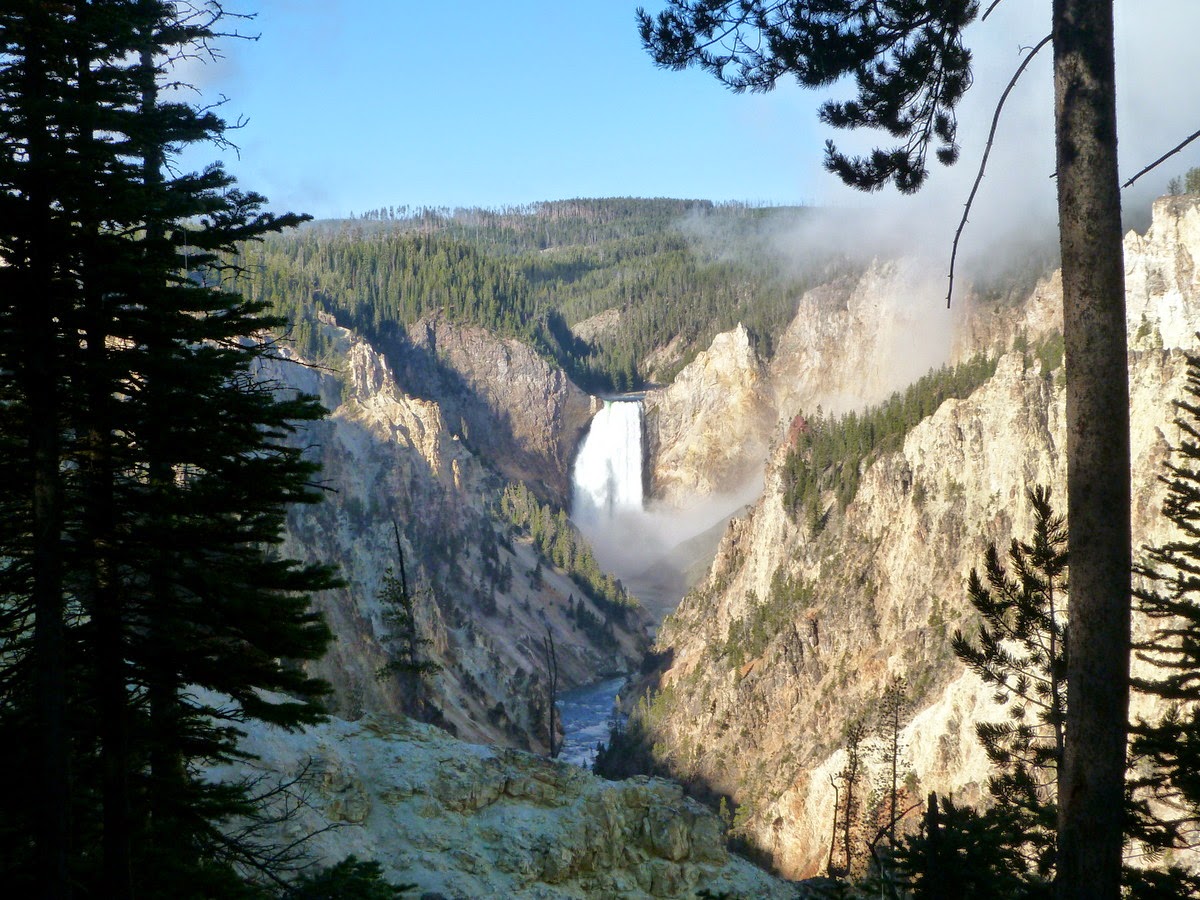 The views were absolutely stunning – this is certainly the best vantage point for the Lower Falls.  I mentioned the cold to a passing park ranger, and she replied “This is warm! Come back in February, you’ll think this is great!”  I won’t be coming back in February. 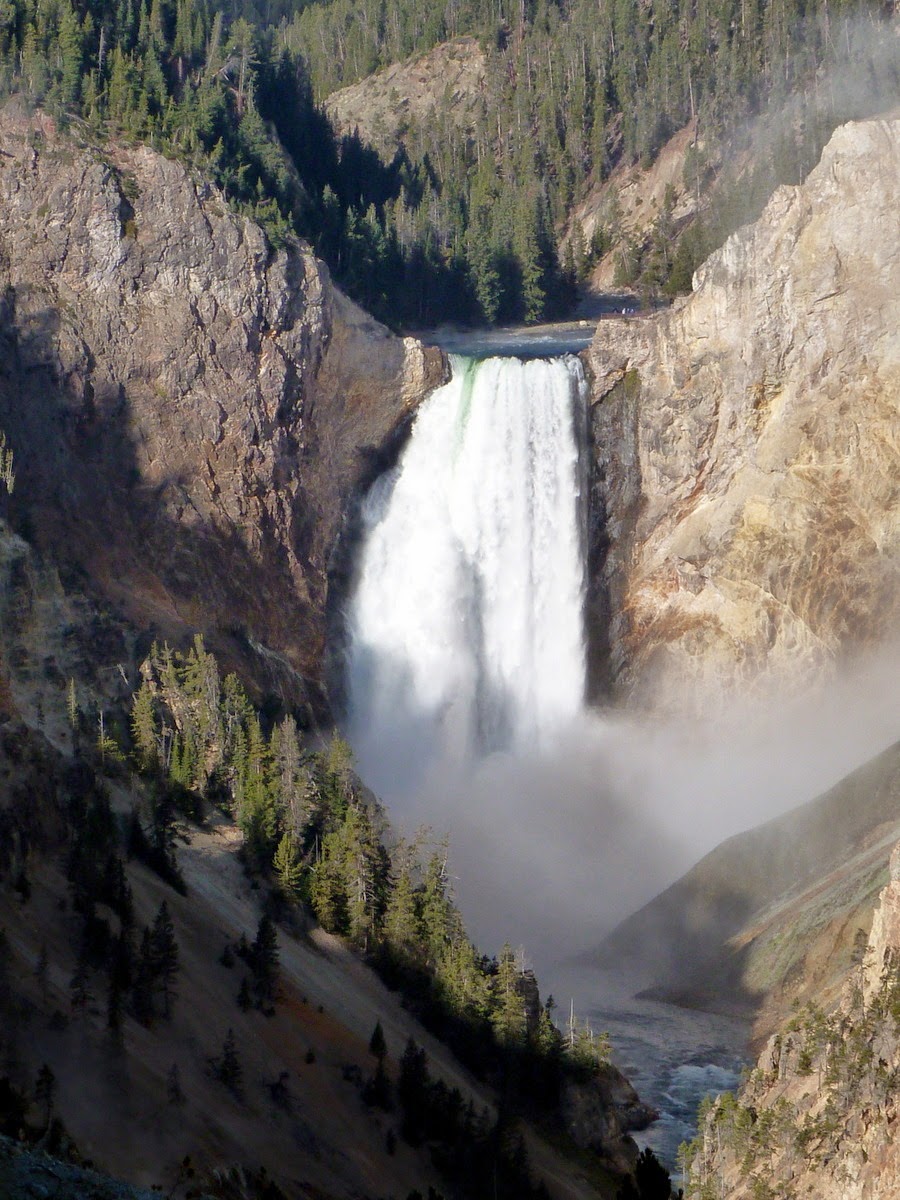 Kathryn was the only one of our group using front panniers.  I would have thought that they would make the front of the bike unstable and difficult to steer, so while we were waiting to regroup I had a ride on it, and was amazed at how stable it was.  The panniers are low down at the front – mostly below the axle height, and of course create a much better front-rear weight balance.  I may well try a similar set-up next time. 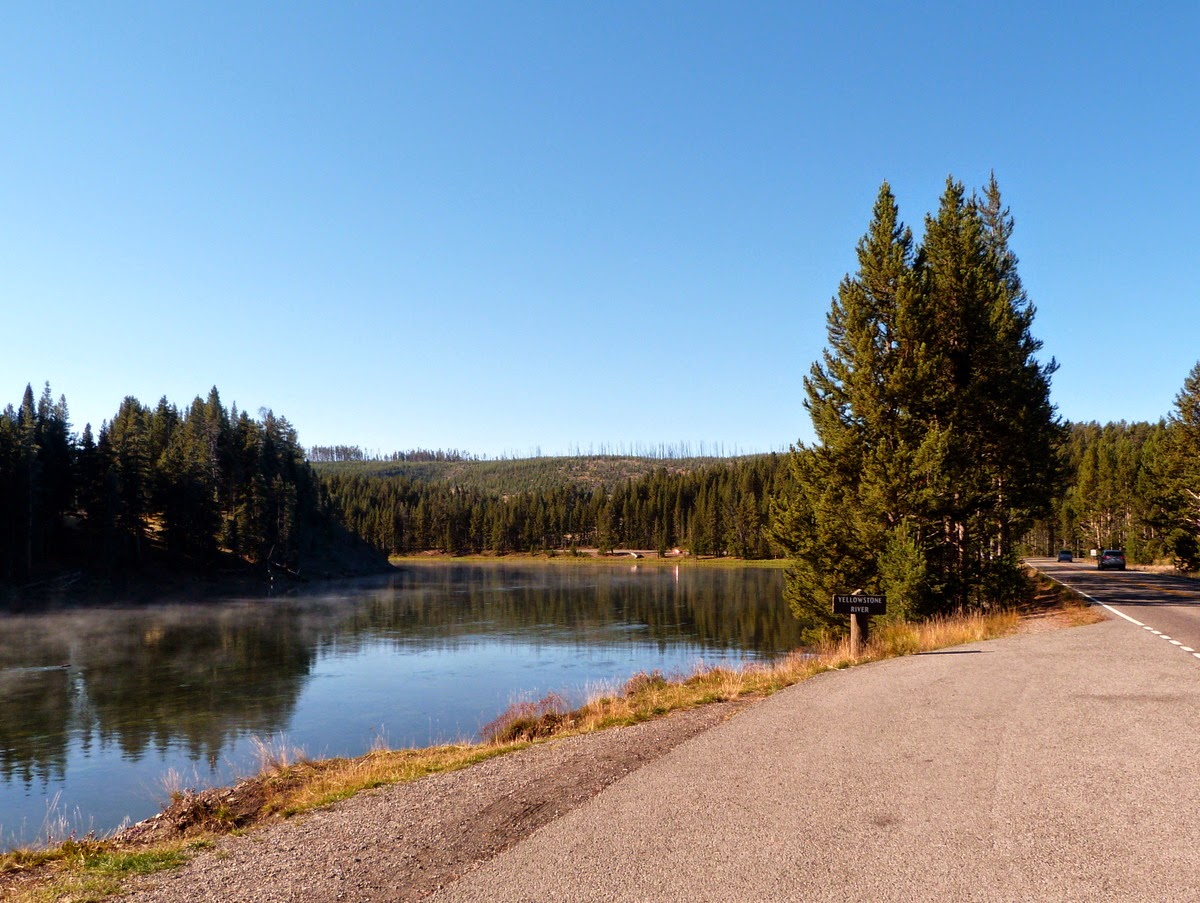 Once back on the main road we followed the Hayden Valley south, alongside the Yellowstone River. Not only is the scenery fabulous but this valley is one of the best in the Park for wildlife.  There were Canada Geese and Trumpeter Swans on the river, and Bison, still cold even as the sun rose.  As I cycled past a small group on the skyline of a nearby hill, I looked back and saw the gibbous moon directly over them – a great photo opportunity.  I wished I could have brought a much bigger lens and a tripod! 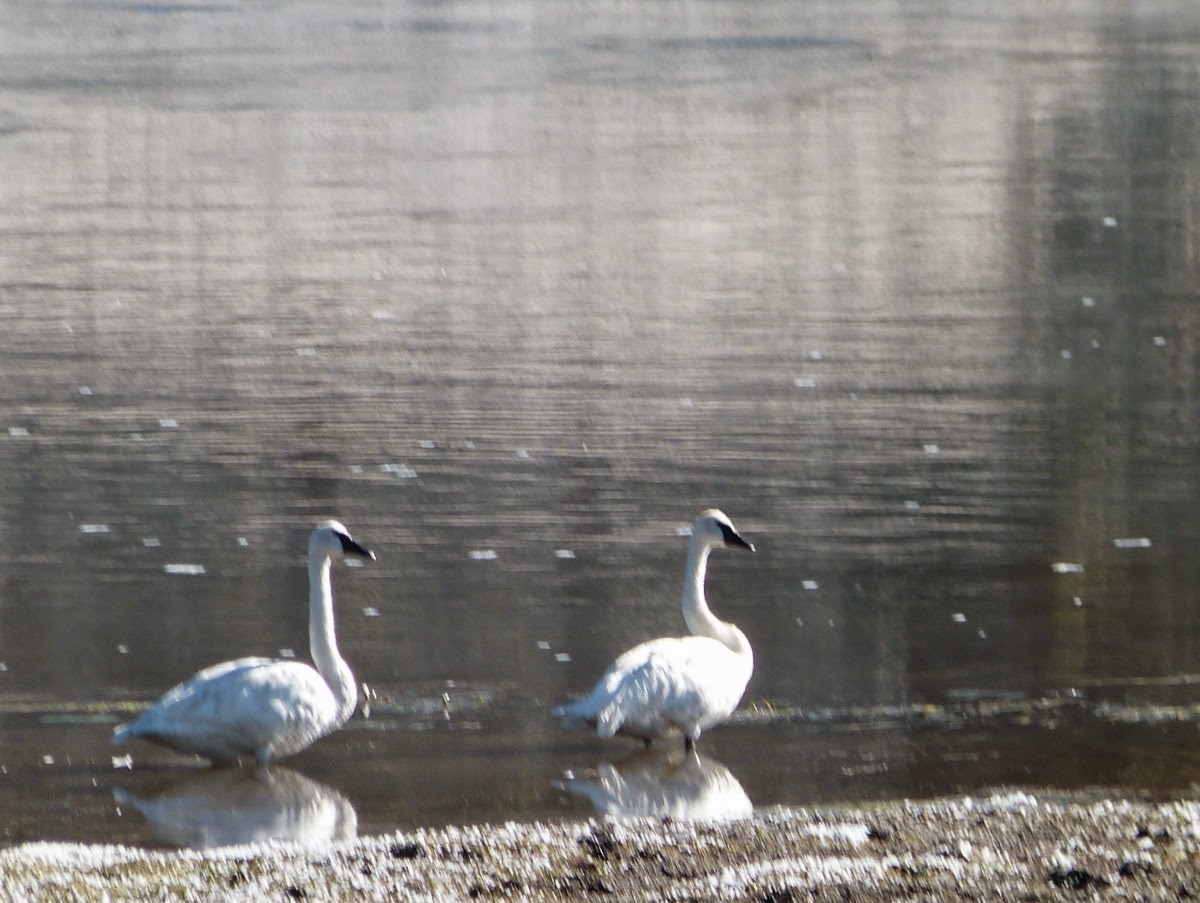 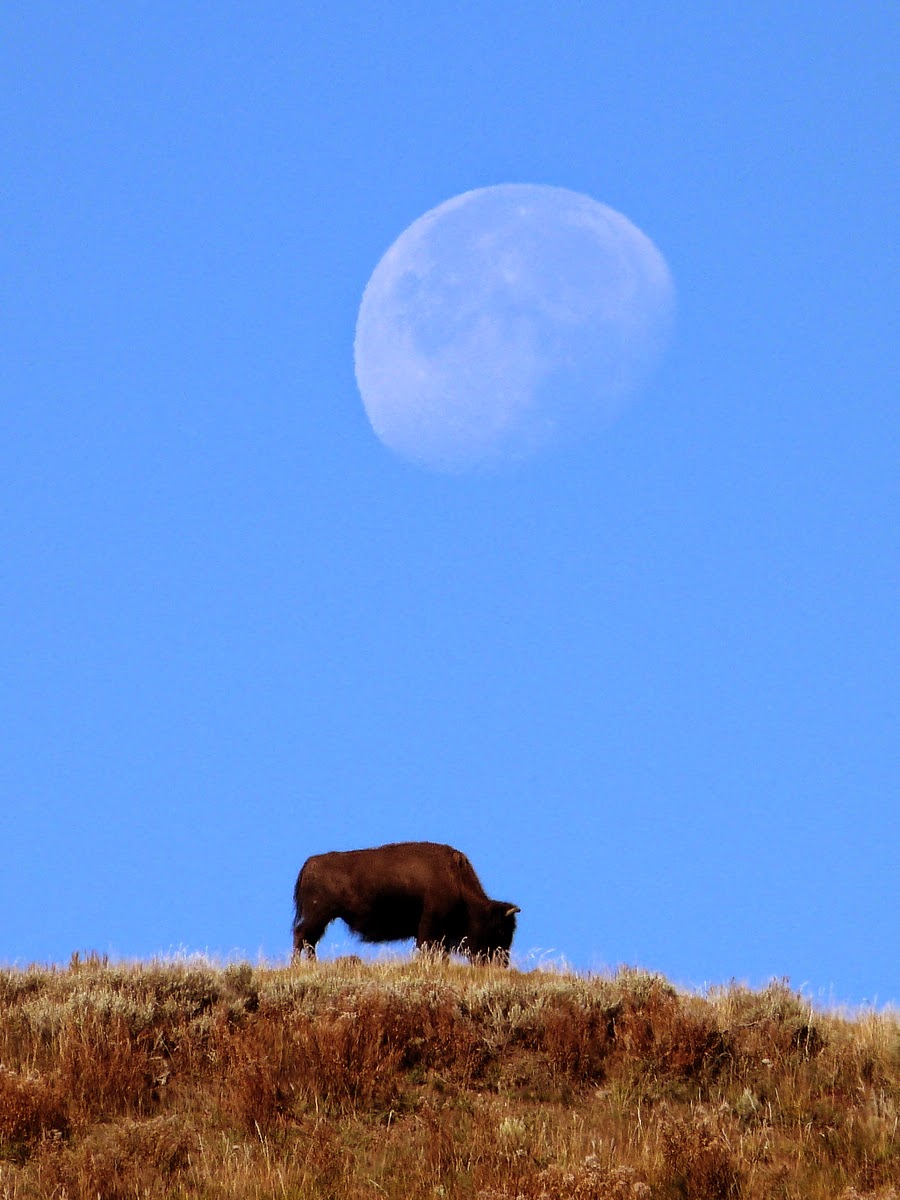 At Sulphur Cauldron there is a boiling, stinking fumarole whose pH of 1.3 makes it one of the most acidic in the Park.  It even has a little satellite which appeared almost overnight some years ago in the middle of the turnout!  Nearby is the huge complex of Mud Volcano, where we spent at least half an hour following the boardwalk around the various fumaroles.  Lots of birdlife here, with American Robins, Steller’s Blue Jay and a flight of White Pelicans.  Then a Red-tailed Hawk arrived overhead, and an American lady nearby exclaimed “Look! A Golden Eagle!”  Those of you who know me will know that I’m not one to keep quiet under such circumstances, so she left with slightly more bird knowledge than she arrived with! 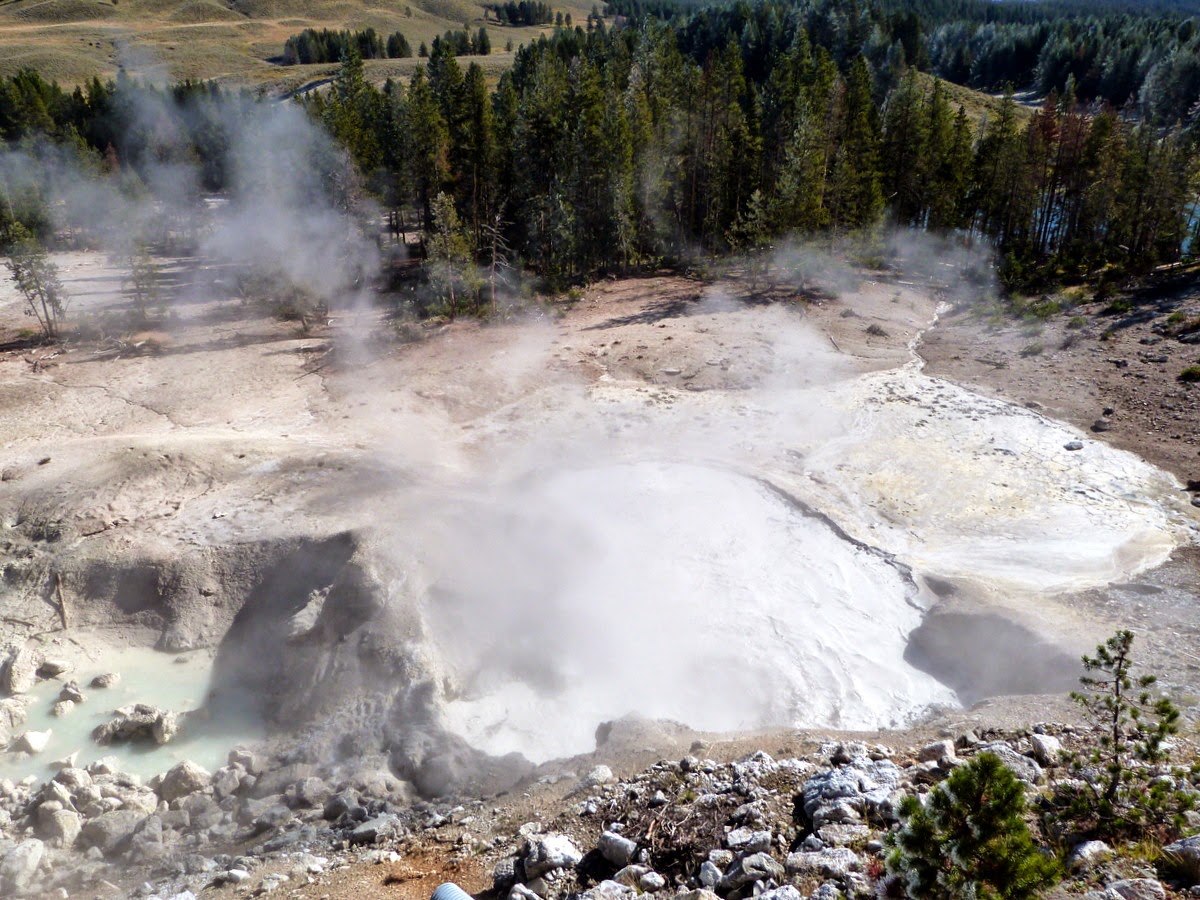 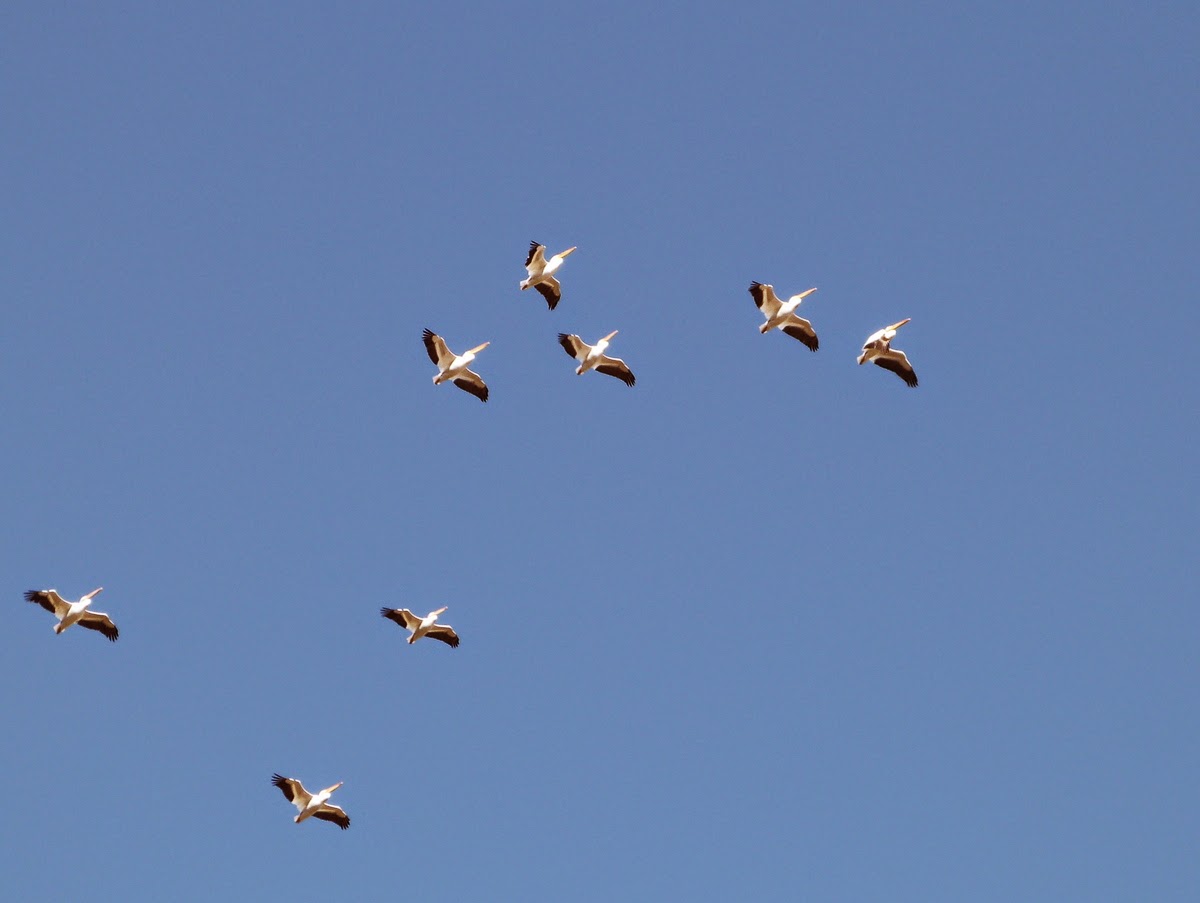 Next up were some rapids where there were several Harlequin Ducks (a long way inland for a sea duck, but the females gather here in Autumn), and then we arrived at Fishing Bridge (don’t you just love the signs!).  We stopped to photograph a Bison close to the road in some trees, then stopped for food at the village service station.  The ‘Danish’ with blueberry and cheese was delicious, but I wished I hadn’t bothered going to the loo.  It was to be a recurring feature of the tour that I would be queuing for a loo as the occupant fell asleep, lapsed into a coma or even died.  There were times when I could not believe how long people could spend in there! 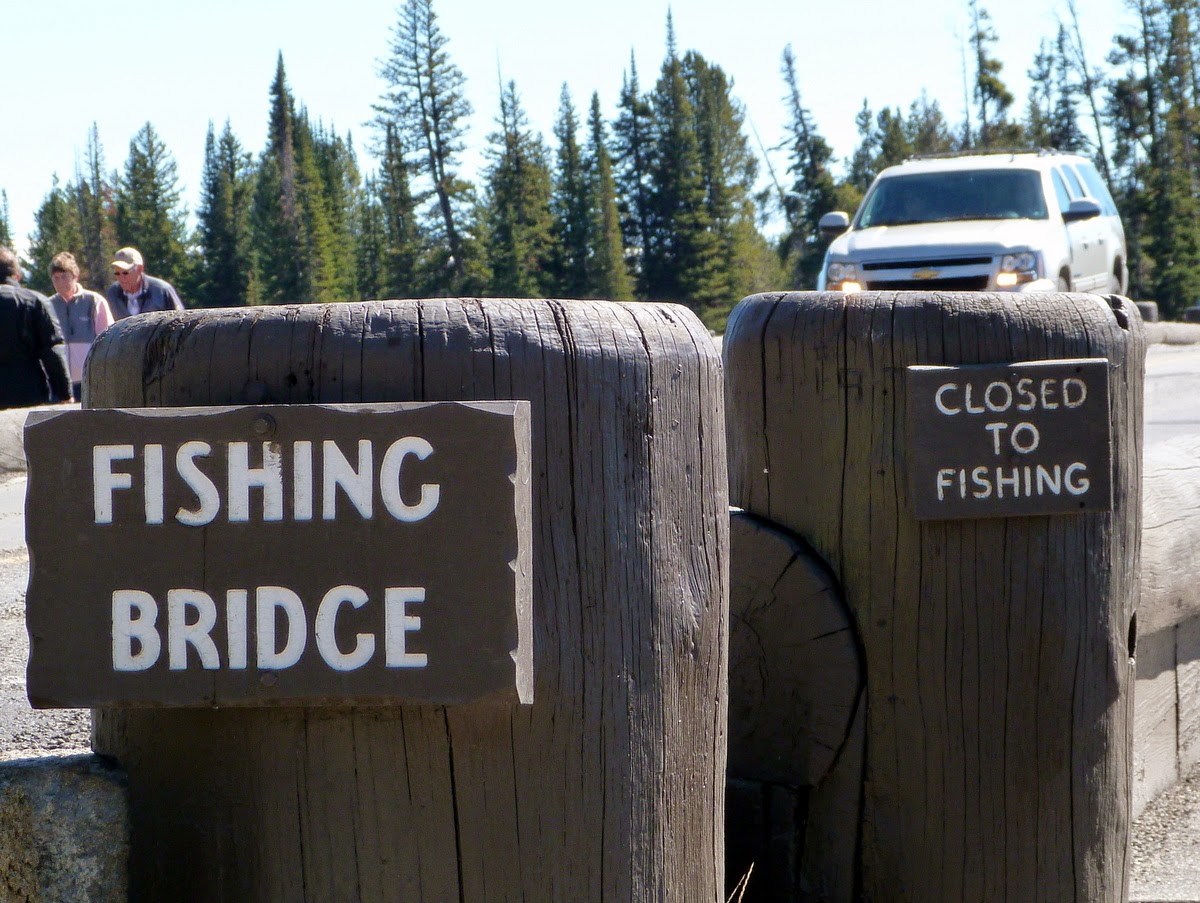 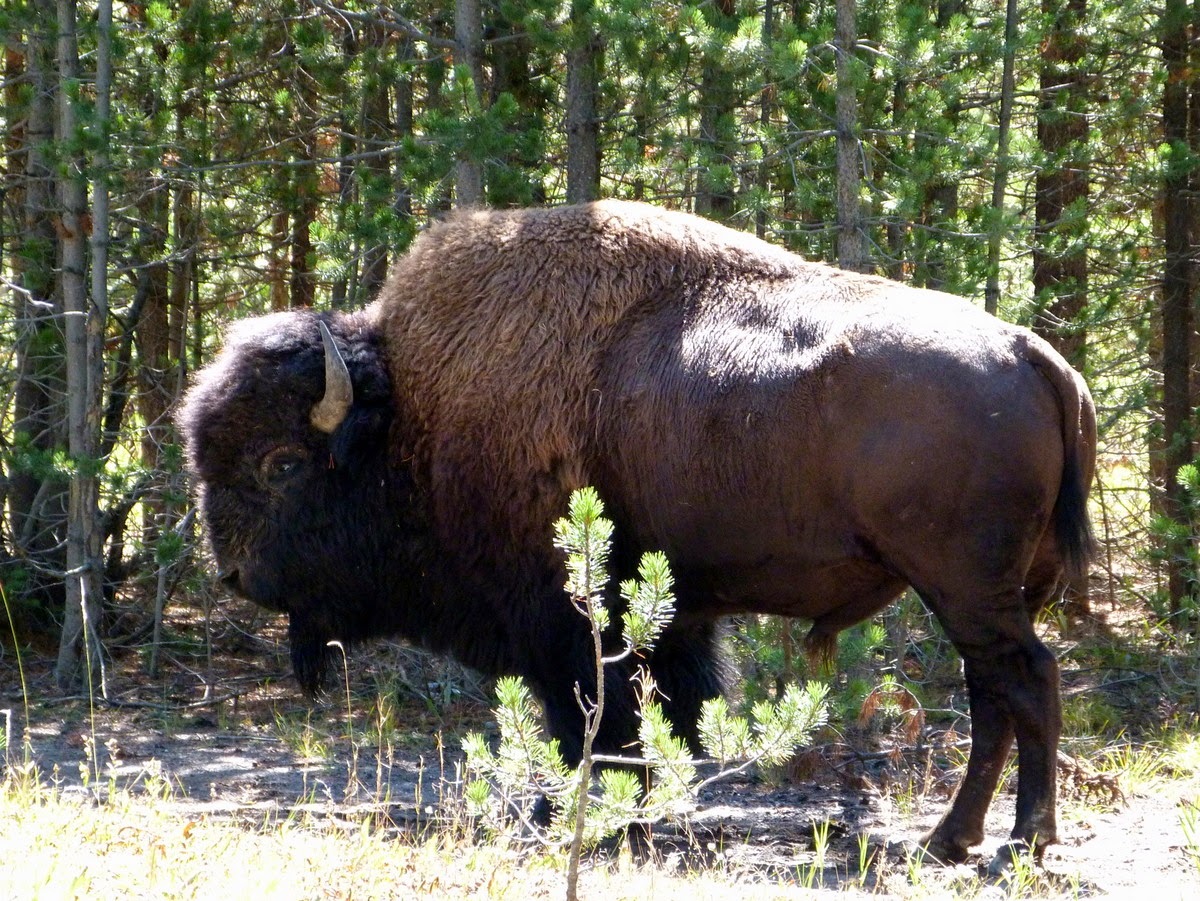 Setting off again, a couple of frisky Bison by the roadside gave me cause for concern but I used the slowing-down cars as protection by placing them between me and the beasts.  I have to say that drivers always quickly cottoned on to my motives when this happened.  The road skirted the north shore of Yellowstone Lake, with Spotted Sandpipers, Mergansers, Goldeneye and the closely-related Bufflehead, and then a long climb began, past acres of dead trees, towards the top of Sylvan Pass, which would be the highest point reached on the whole tour (8,530’ / 2,600 m).  The scenery was gorgeous, the weather was now warm, and the world seemed perfect. 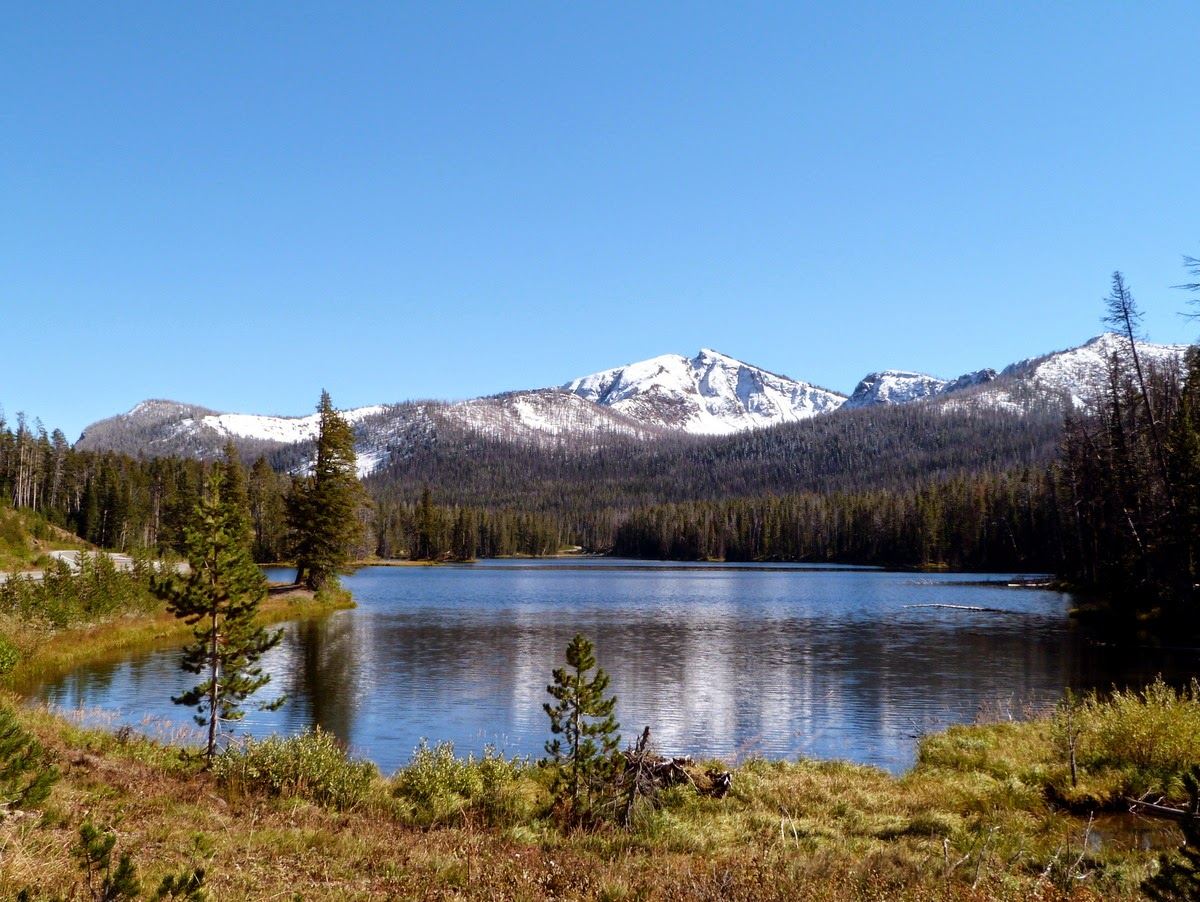 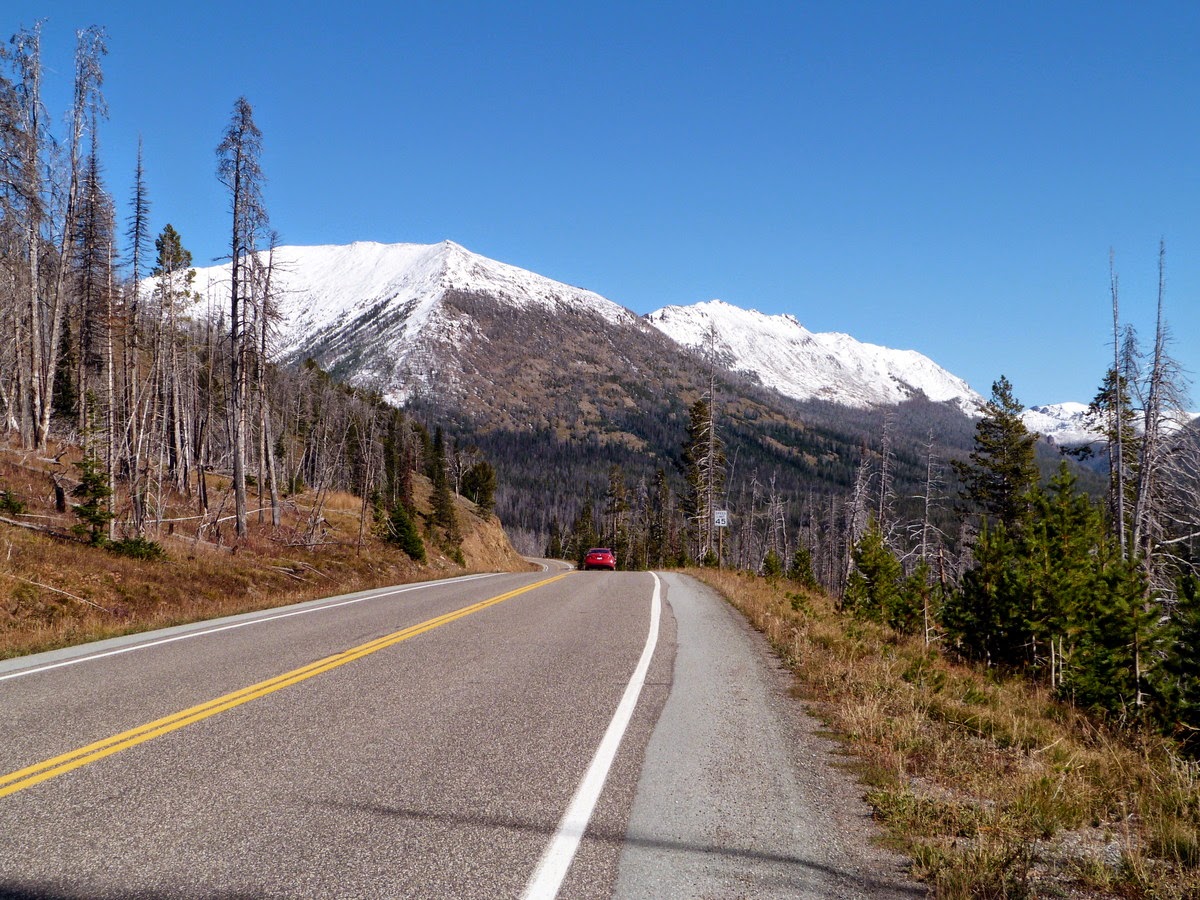 Sylvan Lake was perfectly photogenic, Avalanche Peak majestic, and even a lazy Bison looked happy as it sat just off the road.  Sylvan Pass itself feels quite stark, then on the other side the descent is much longer than the ascent was, and for mile after mile I sped along at 30 mph, with the deep defile of the Wapiti Valley on the right hand side, trying to look for bears on the left whilst staying on the road! 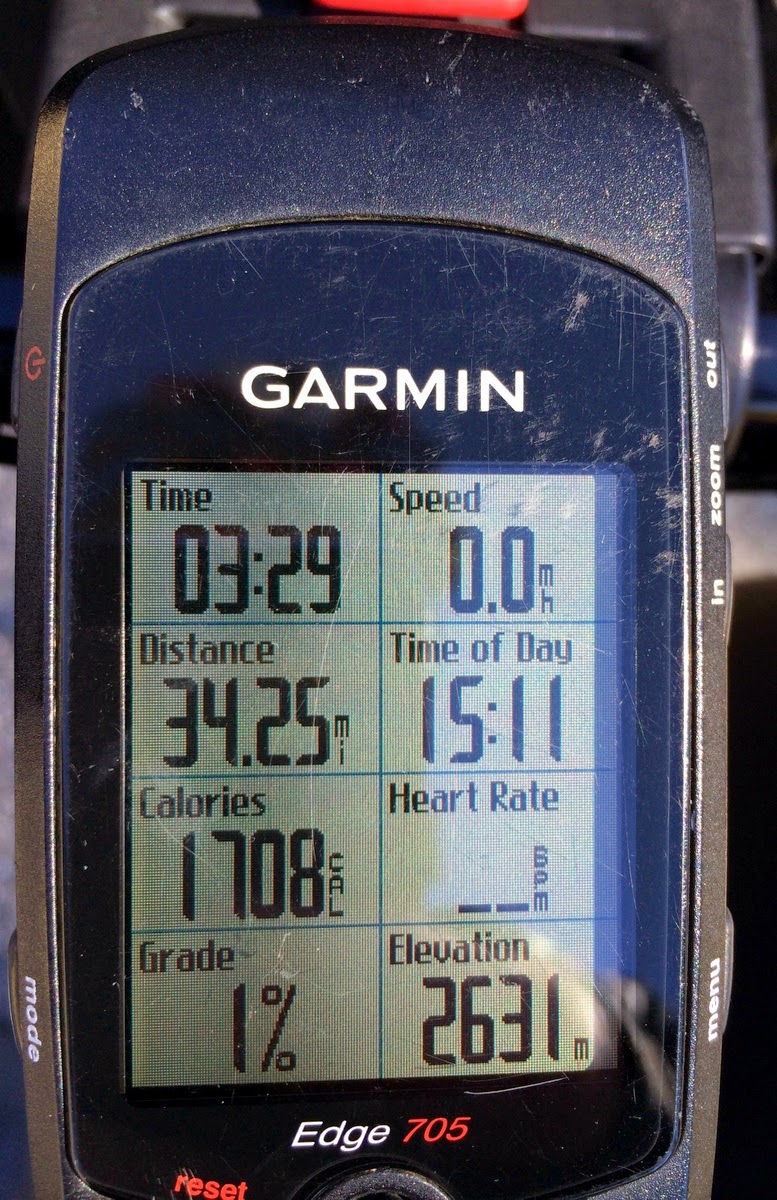 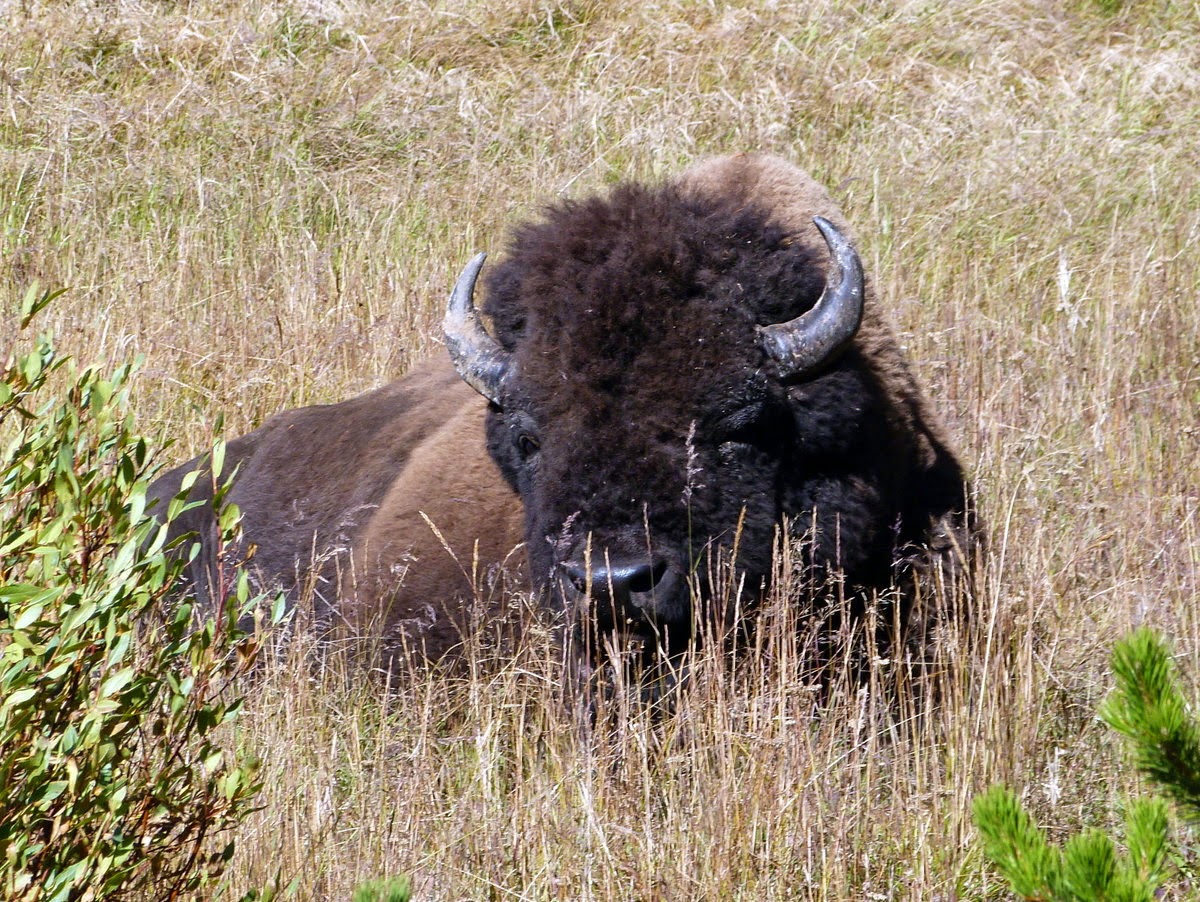 Before long we passed through the East Entrance to the Park and entered the Shoshone National Forest, still looking for bears (unsuccessfully).  Jeff and I stopped for a coffee at the Pahaska Tepee resort about two miles short of our destination.  Pahaska is Sioux for ‘longhair’ and was Buffalo Bill’s Indian name.  As I sat down by the window to drink the coffee I told the waitress that we were going to sit there until a Grizzly wandered past.  “You’ll be there a long time” she drawled. 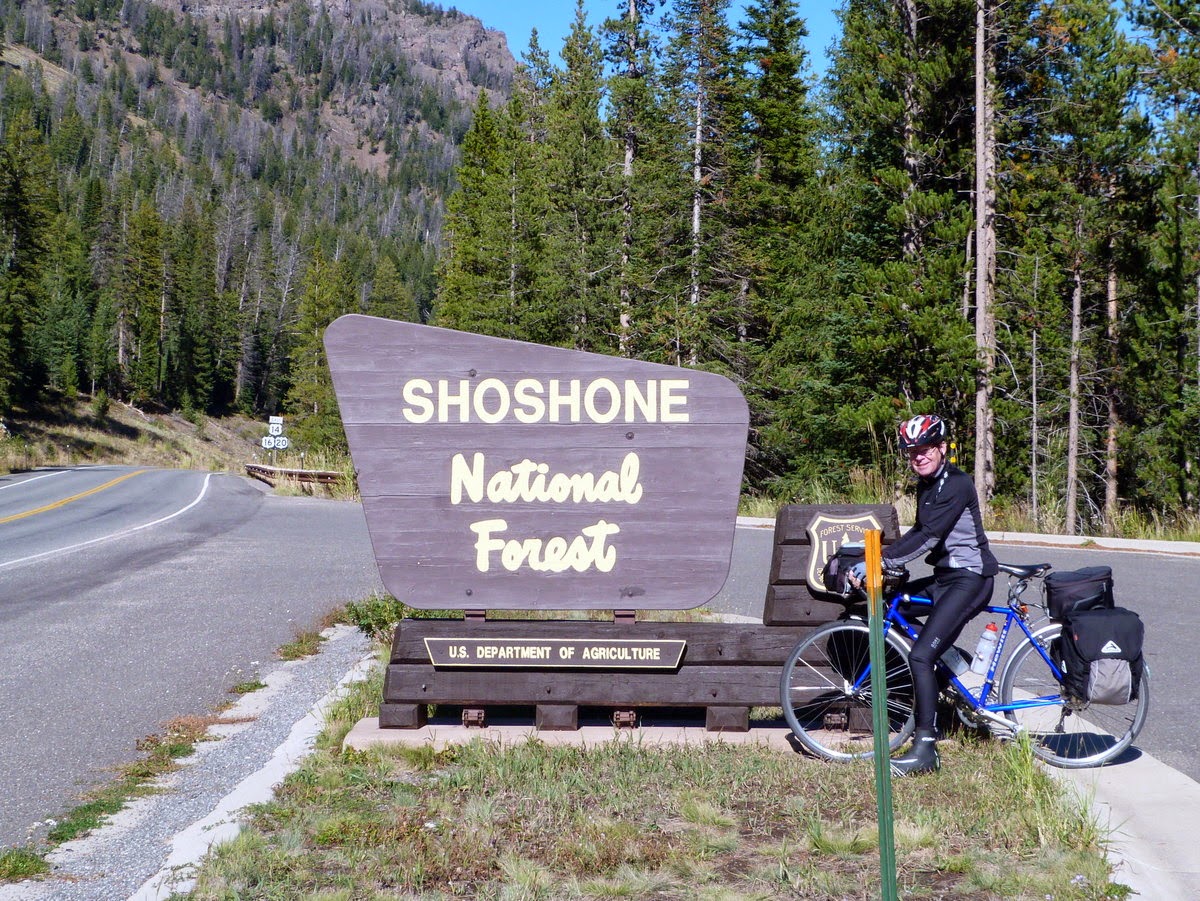 Another couple of touring cyclists were there too, heading in the opposite direction and staying overnight at Pahaska.  They weren’t looking forward to the long climb tomorrow, but at least they were to get a following wind, though they didn’t know it yet. 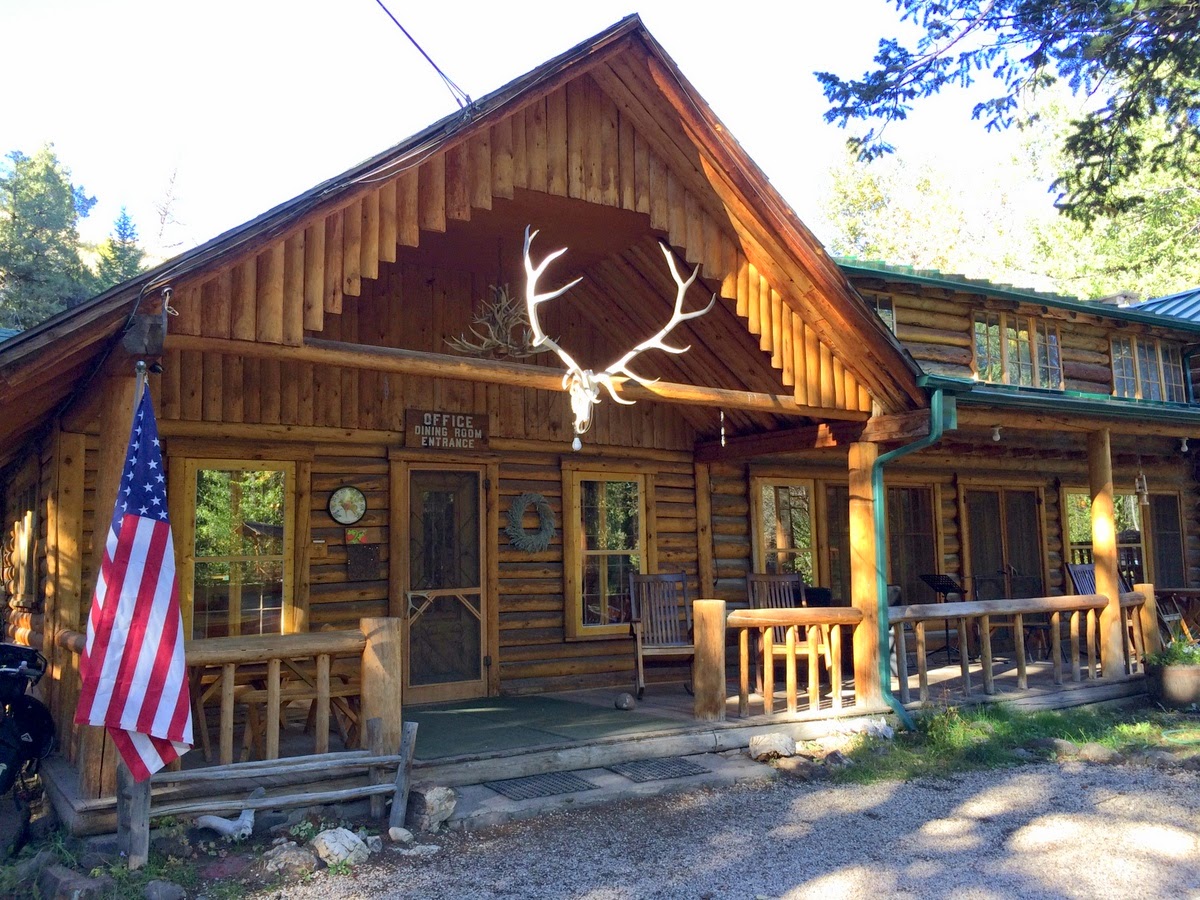 Finally we arrived at Shoshone Lodge, a wonderful family-run ranch with a really authentic feel – lodgepole construction, stuffed Moose heads big enough to put Fawlty Towers to shame, and where everyone had a sense of humour.  The cabins were comfortable and we enjoyed an excellent dinner- and a fireside chat to end the day. 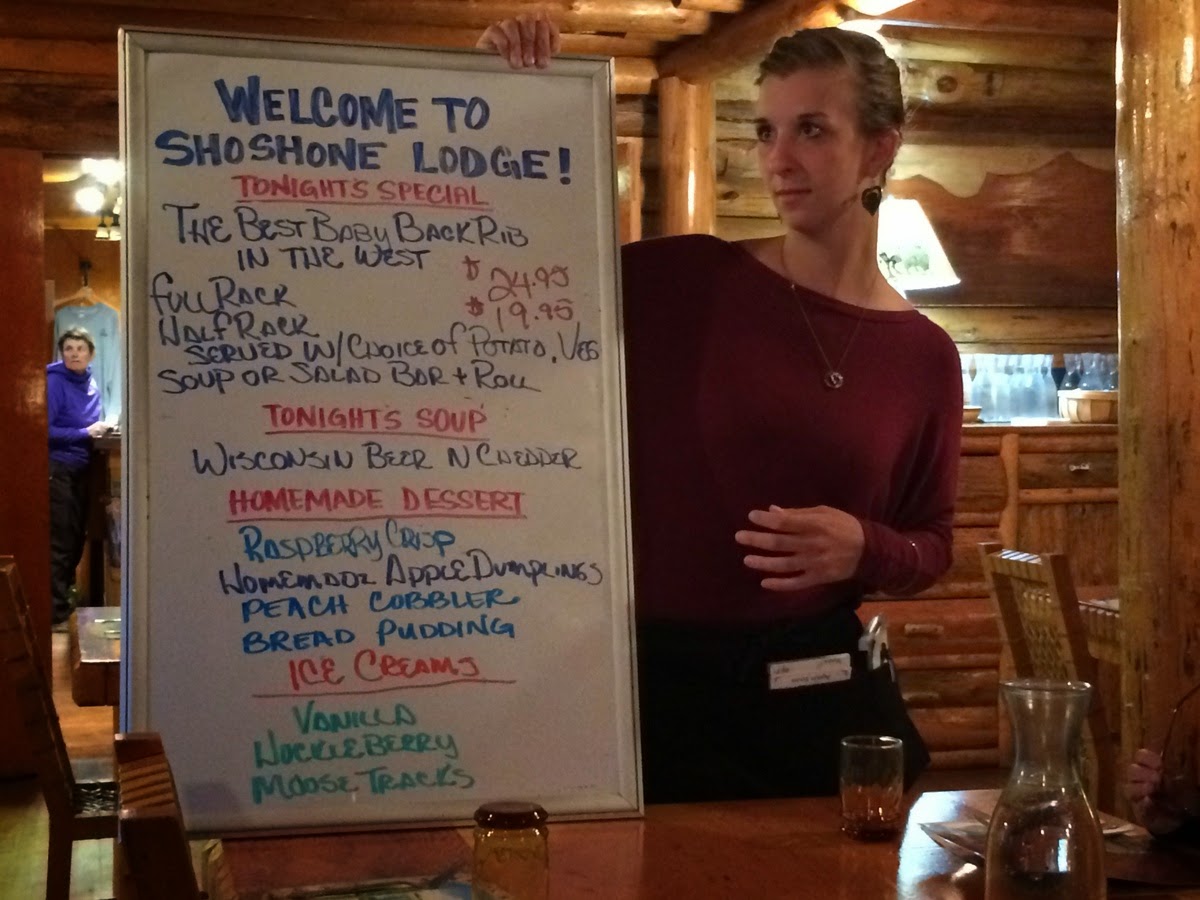 Even Andy couldn't finish the Full Rack of Beef - massive!