No cycling planned for today.  Perhaps just as well as we woke up to a dusting of snow and temperatures well below zero – or should I say 32°? – the USA has yet to embrace the Centigrade scale and everything is in Fahrenheit.  At breakfast we discussed our plans for the day, and the consensus was to walk along the North Rim of the Grand Canyon of Yellowstone, but first we thought we’d do a bit of research by going to the Visitor Centre.  Not for long though – Andy arrived, informing us that according to his weather forecast things would deteriorate later, so we decided to set off toute suite. 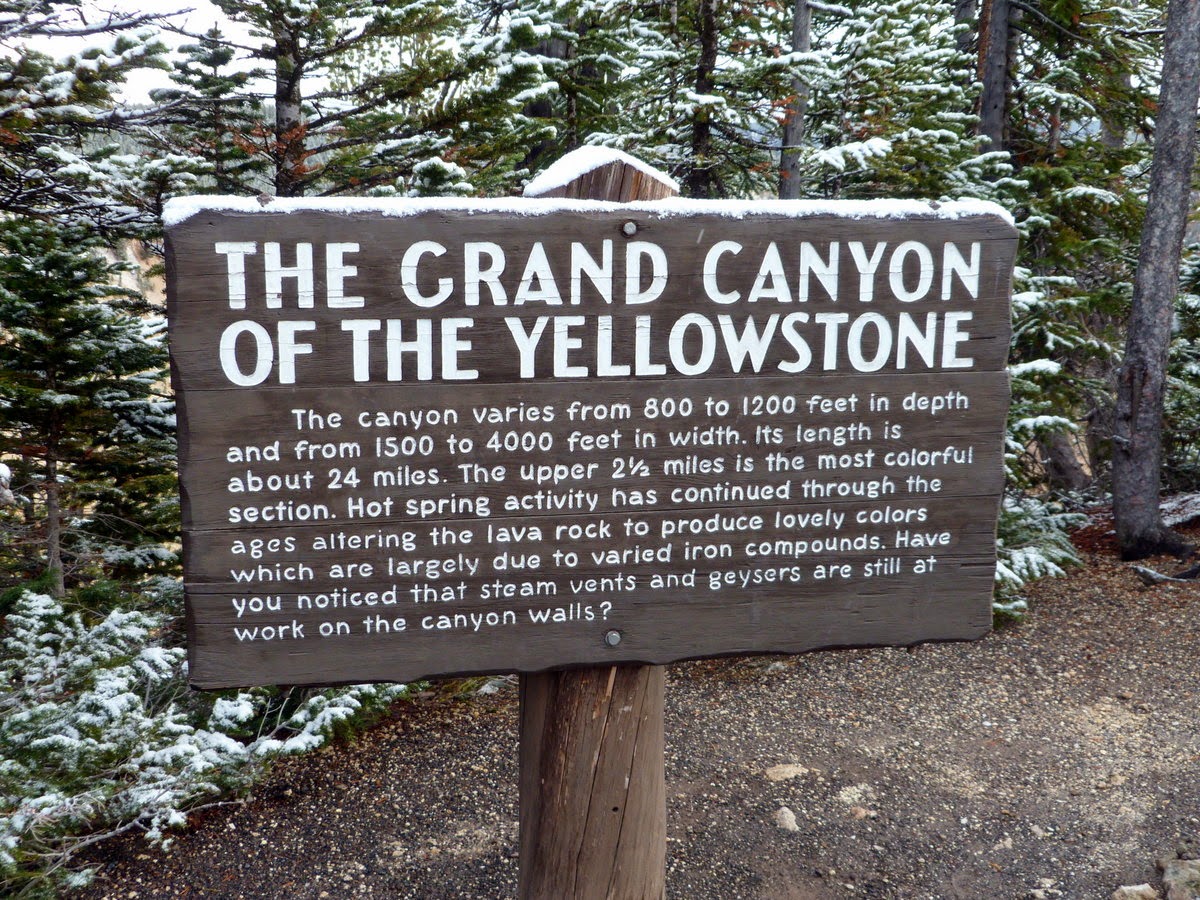 It was a fairly short walk to the road which runs close to North Rim, and starting at the North-East end was Grand View, which really is jaw-dropping.  The canyon is immensely deep – 1,000 ft, with sides of rhyolite rock whose colour changes subtly through all shades of yellow, brown and even red, and along the base, a long way away it seems, is the Yellowstone River, inexorably carving its way deeper and deeper through the rock. 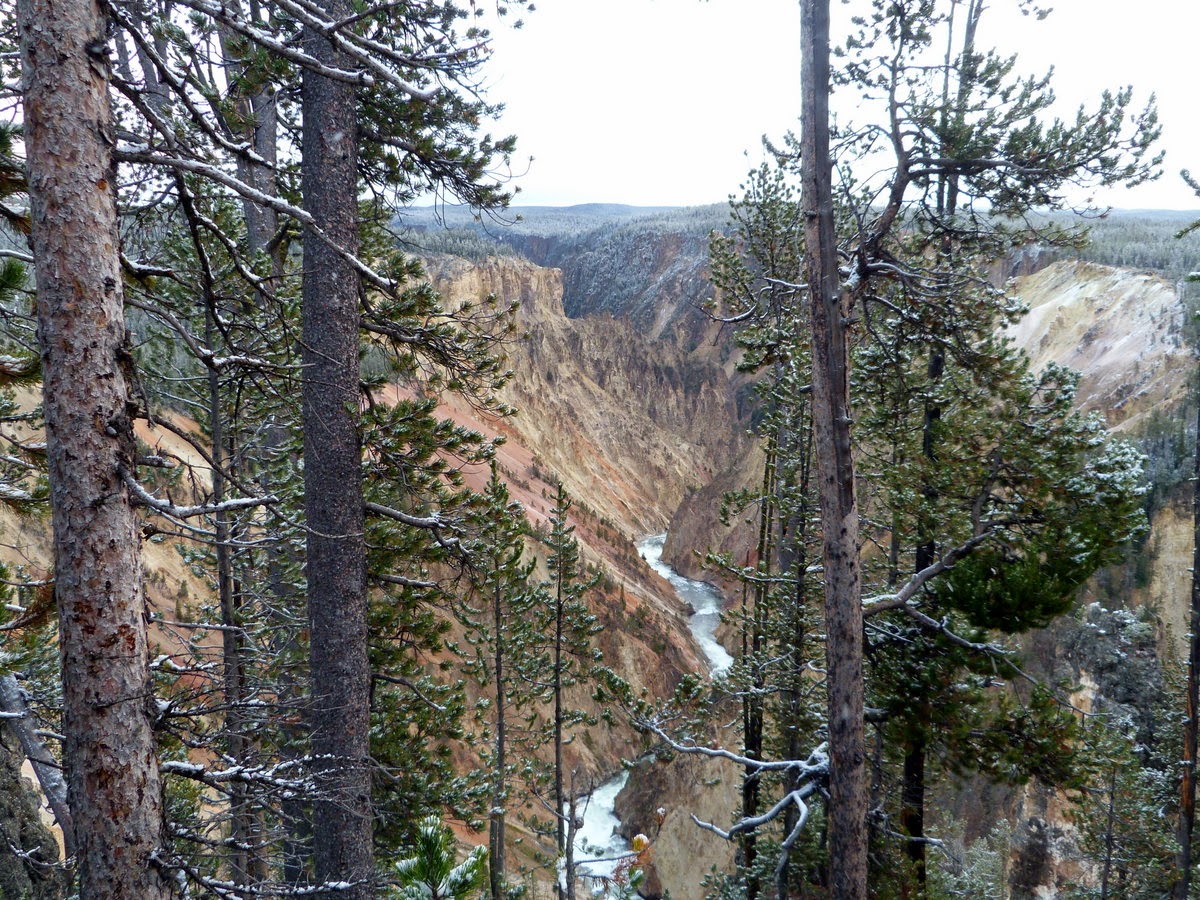 The Grand Canyon of Yellowstone comes into sight at Grand View 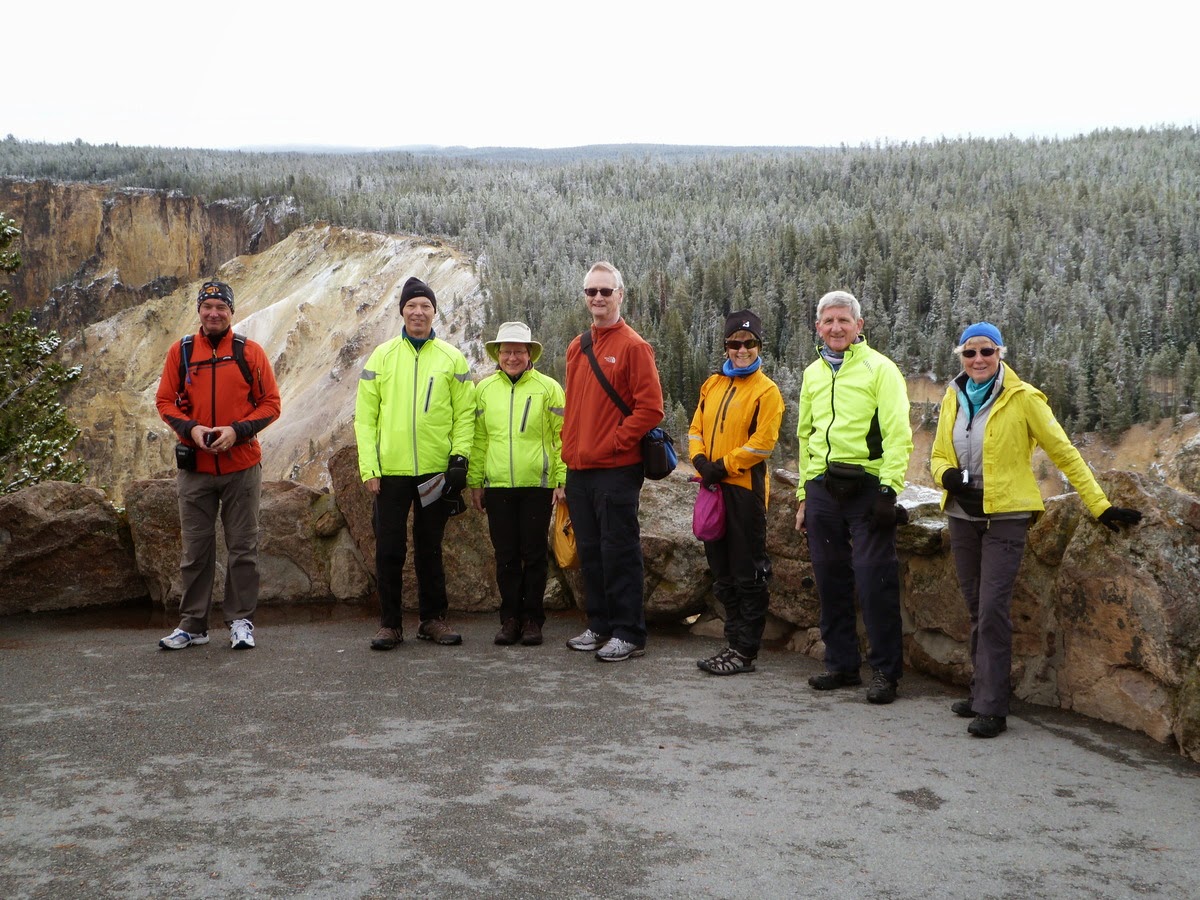 Light snow flurries, grey clouds and icicles reminded us that even though it was early September, the weather was much better suited to walking than cycling.  We met Woody, our bus driver of two days ago, in charge of a small tour group and clearly enjoying his job!  You could see the Lower Falls from here, but a much better view was to be found at Lookout Point, where an old Osprey nest could also be seen on top of a pillar of rock.  The Lower Falls are 308’ high, and a lot of water goes over the edge:  it must be quite deep on one side as the water appears green for quite a way before it’s finally broken up into a swirling white mass. 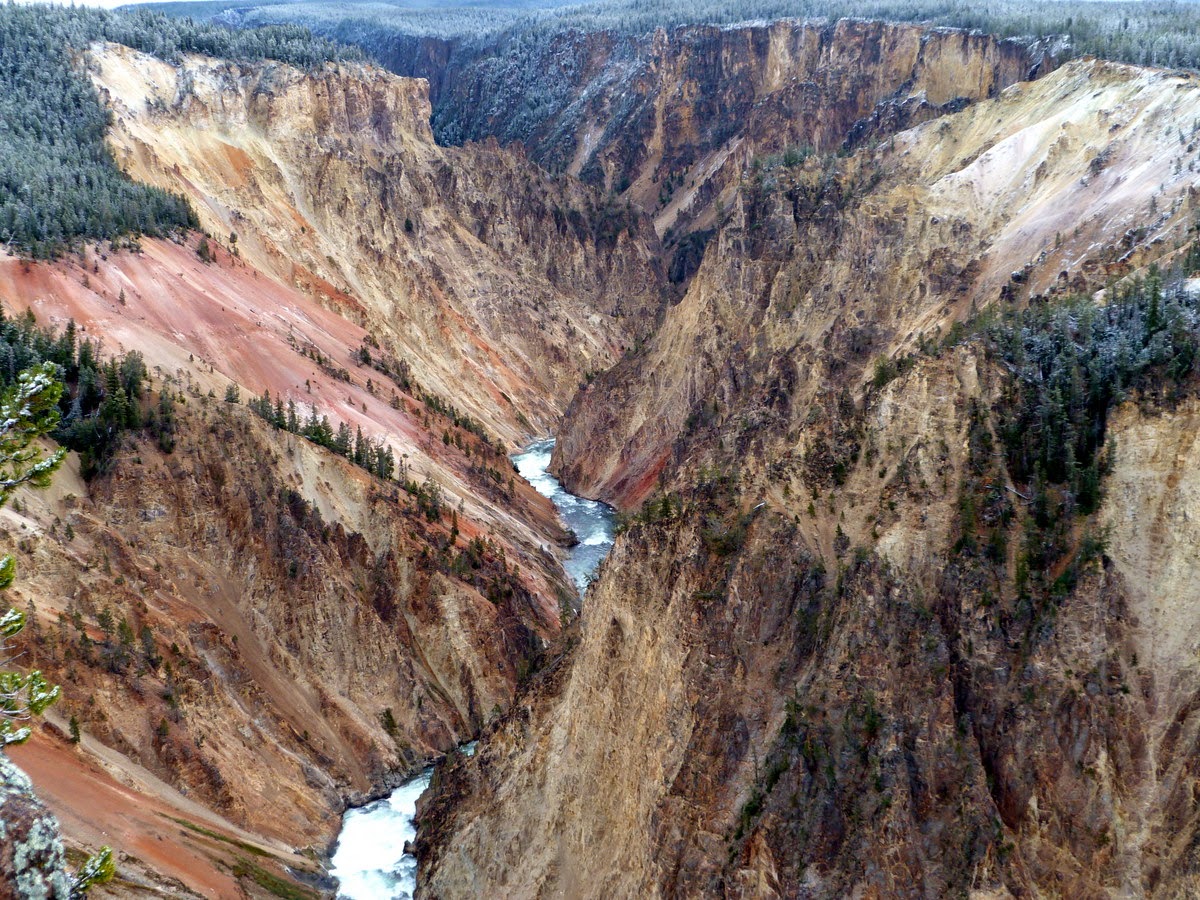 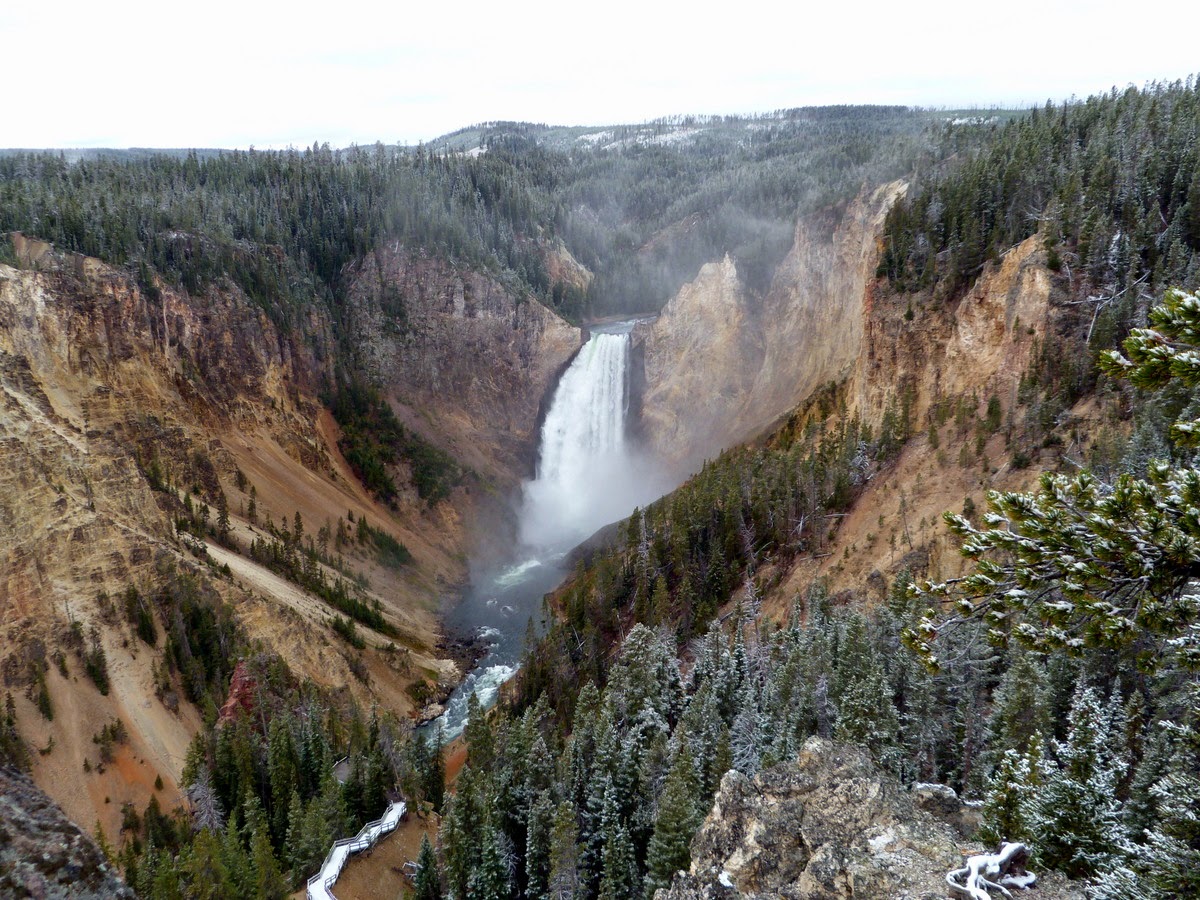 We took a wonderfully twisting footpath which wound down about 500’ to the Brink of the Lower Falls for an even better view, and then of course had to come back the same way. 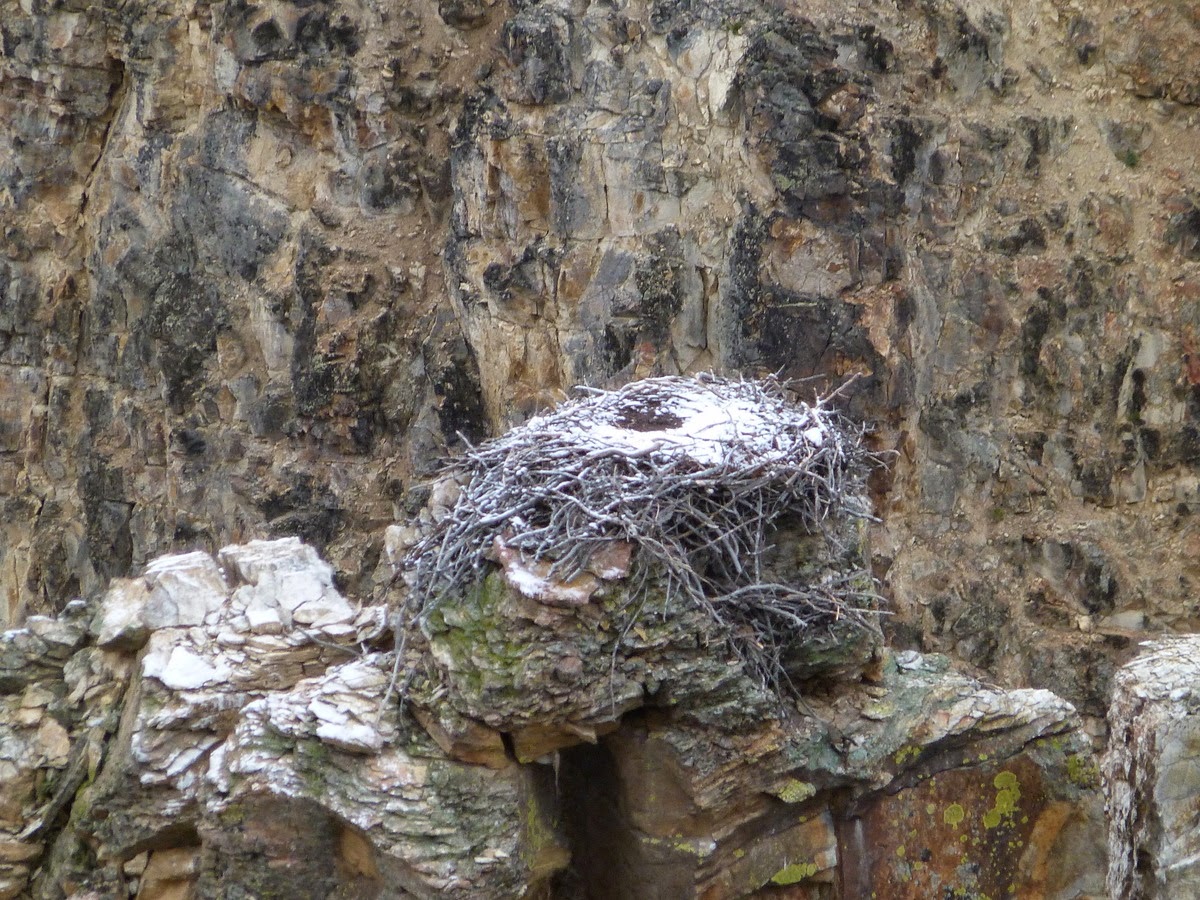 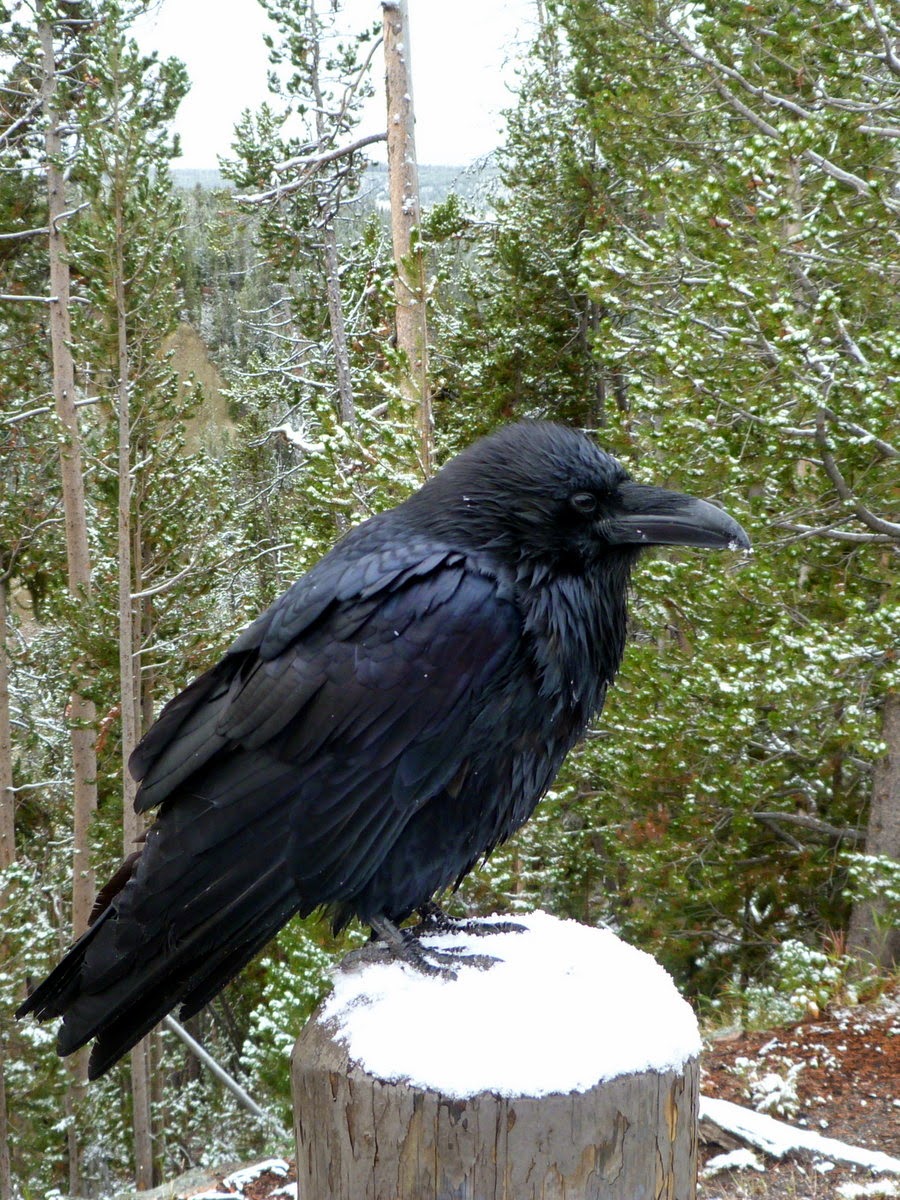 Tame Raven (or just fed up?)
We continued on the footpath, where some of the Ravens are so tame they just sit on fenceposts by the side of the path (or were they just frozen to death?), past Crystal Falls to the Viewpoint of the Upper Falls (109’).  All this water has flowed out of Yellowstone Lake and run along the Hayden Valley, and from the Grand Canyon of Yellowstone it carries on north and then east to join the Missouri and eventually reach the sea in the Gulf of Mexico. 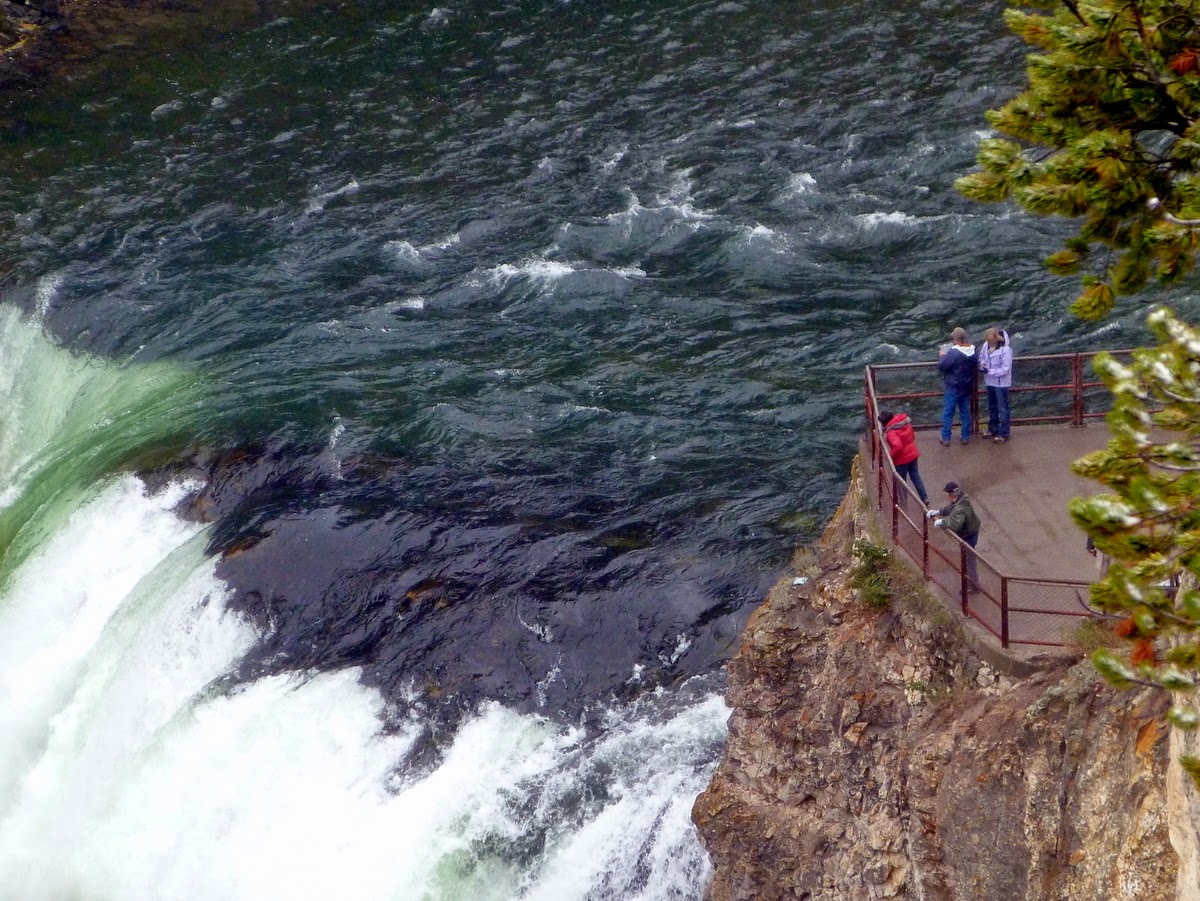 Brink of the Lower Falls... 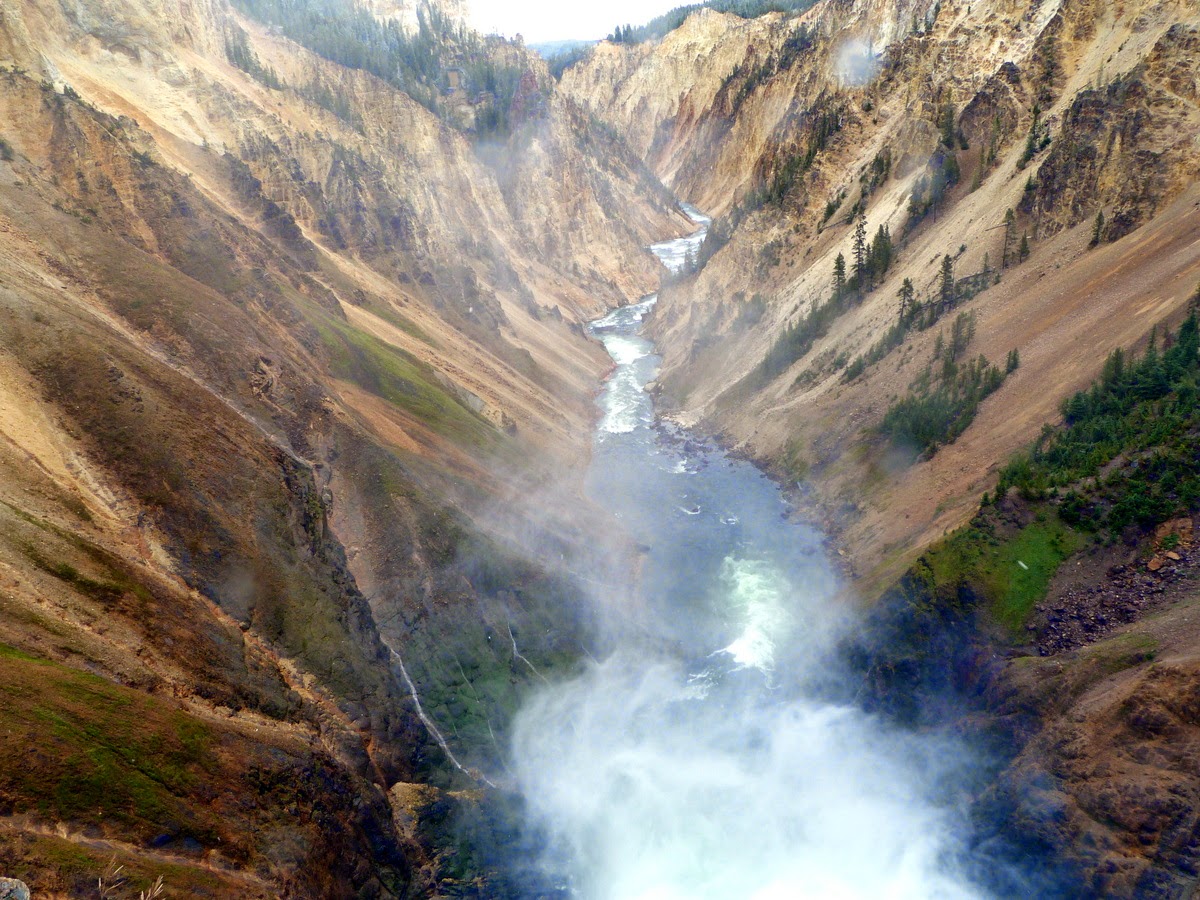 ...and the view from the edge

We wandered back to Canyon Village and headed to the Canyon Lodge Cafe for lunch.  I got myself a kind of Bison Burger (I wish I could remember the name!) and then we joined the queue for the only till.  Just as it got to our turn, a phone rang nearby and the young man on the till left his post to answer it.  Minutes passed.  We could see him, and he could see us, but it didn’t look like this was going to be a short phone call and our lunch was going cold.  So I wrote a note to say that we would eat first and pay later, and off we went to a table.  Twenty minutes later, when we returned to the tills, we found them unmanned with no-one to be seen.

And so folks, if you’ve ever heard the expression ‘There’s no such thing as a free lunch’ – I can assure you that THERE IS!  Whether we’ll ever be allowed back into the USA is another matter, of course... 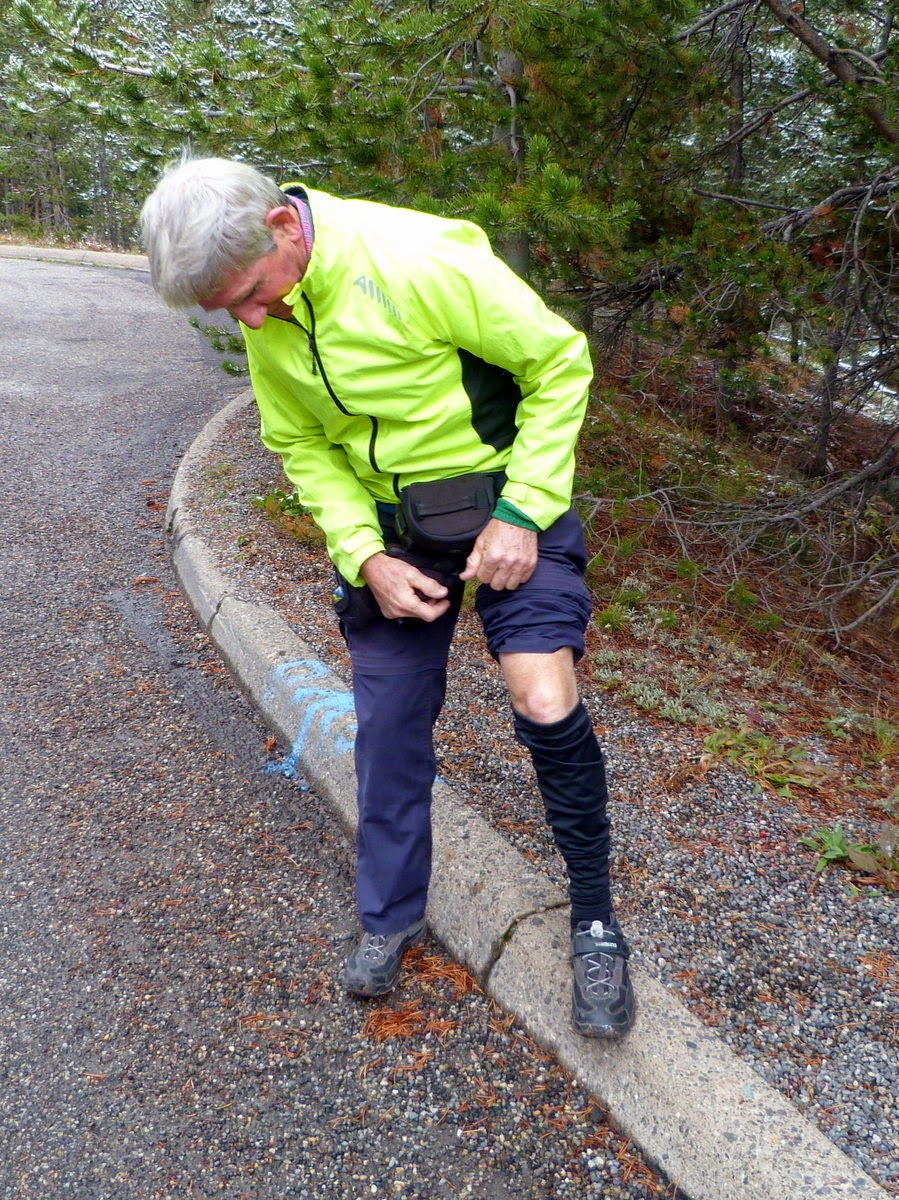 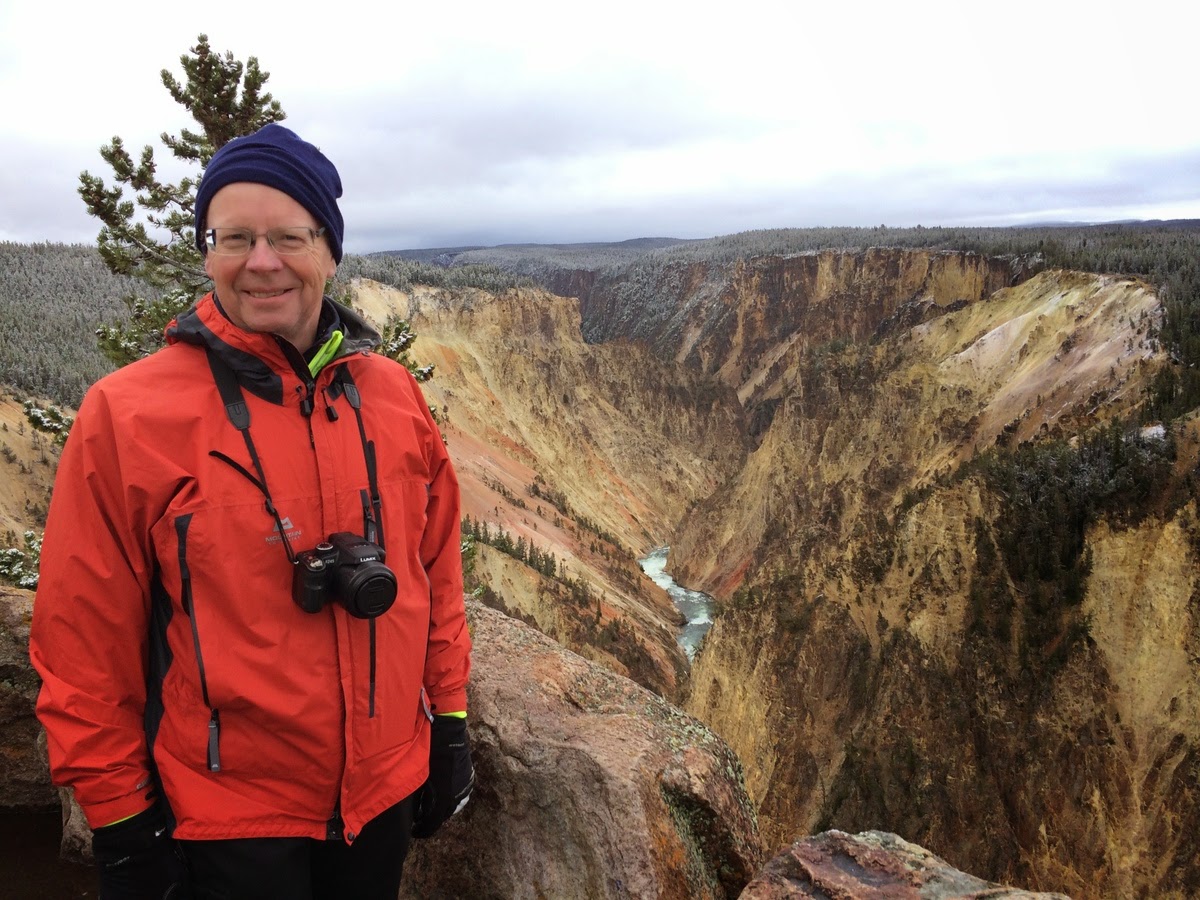 Rare photograph of the Author.  Several layers of clothing under that top!
I spent the rest of the afternoon sorting out photos, writing diary notes and then having a better look at the Visitor Centre, described in the Lonely Planet Guide as ‘well worth a visit’ although I thought it was a bit on the simplistic side.

Our main concern for tomorrow was, of course, the weather.  We were hoping it would get warmer and the forecast seemed to be on our side, but of course you never can tell.  The next day we were due to leave the Park for a while and head towards Cody, via Shoshone Lodge, and we had the prospect of some good wildlife spotting in the Hayden Valley on the way.  I’ll tell you what happened soon...
Posted by Bill Honeywell at 17:02