You may remember me saying I’d lost a filling on the second day of cycling.  Well the sharp edge ot the tooth was beginning to lacerate the side of my tongue, so as we were heading to Cody, a town of some 10,000 citizens, I thought it worth seeing if I could find a dentist there.  Well of course dentists don’t normally work at weekends, but after a quick exchange of emails with big brother Captain Greybeard (someone who knows how to use Google to find any information) I had the emergency telephone number of a dental practice.  The lovely ladies at reception allowed me to use the phone, but the best I could make contact with was an answering machine. I left my details – including phone number at Shoshone and mobile phone number, the nature of the problem etc.  They haven’t rung me yet. 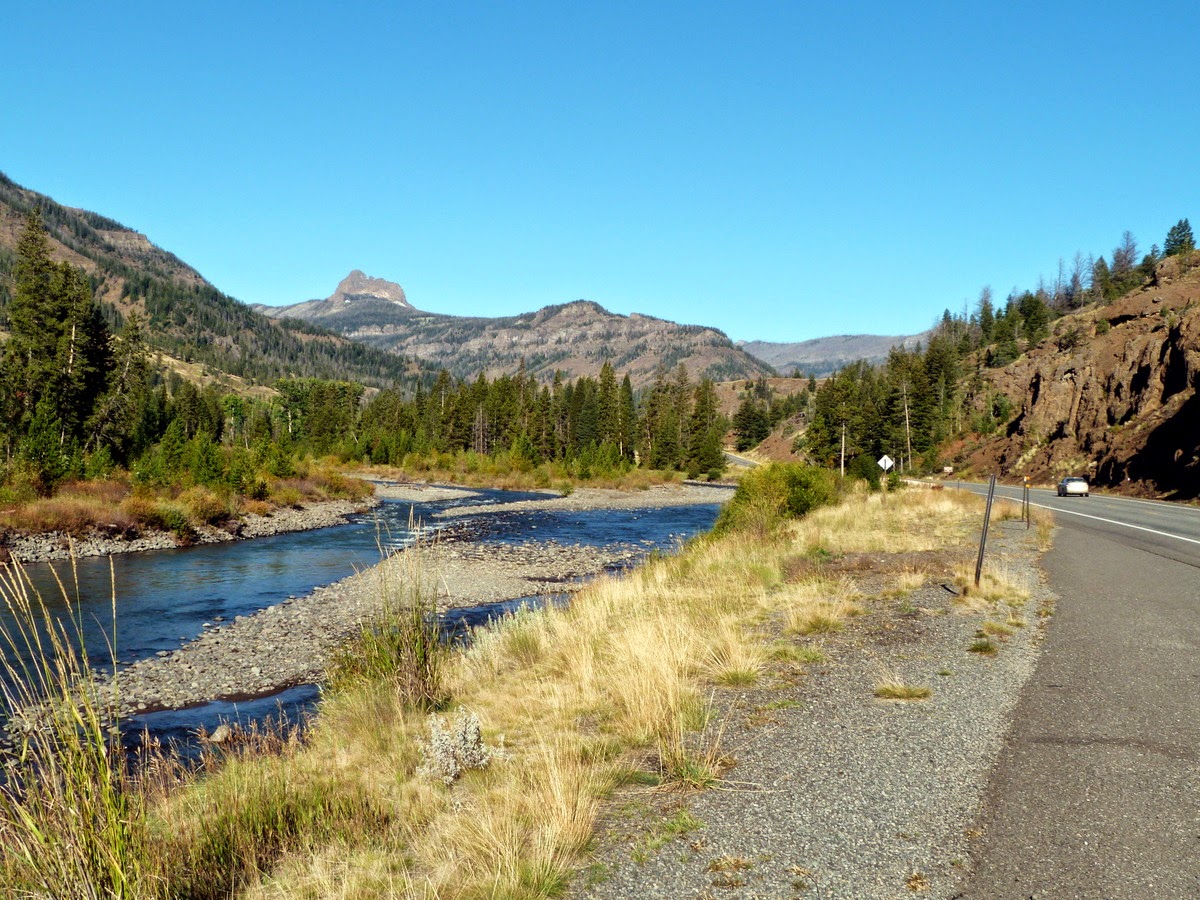 Shoshone River
Time to hit the road and follow the Wapiti Road to Cody.  It looked good on the map – nearly 50 miles generally downhill (following the Shoshone River downstream), described by the guidebooks, and the people at Shoshone Lodge, as perhaps the most scenic road in North America.  The first 25 – 30 miles didn’t disappoint.  The scenery – rivers, rock formations (including the ‘hoodoos’, great pinnacles of sandstone resembling stalagmites at times), the distant snow-clad mountains, were all spectacular.  No bears though.  A few Clark’s Nutcrackers stuffing their cheeks with pine nuts, rather like hamsters.  The Nutcracker is a pretty grey , black and white bird related to the British Jay, which is obvious as soon as it flies in that bouncing, butterfly-like way. 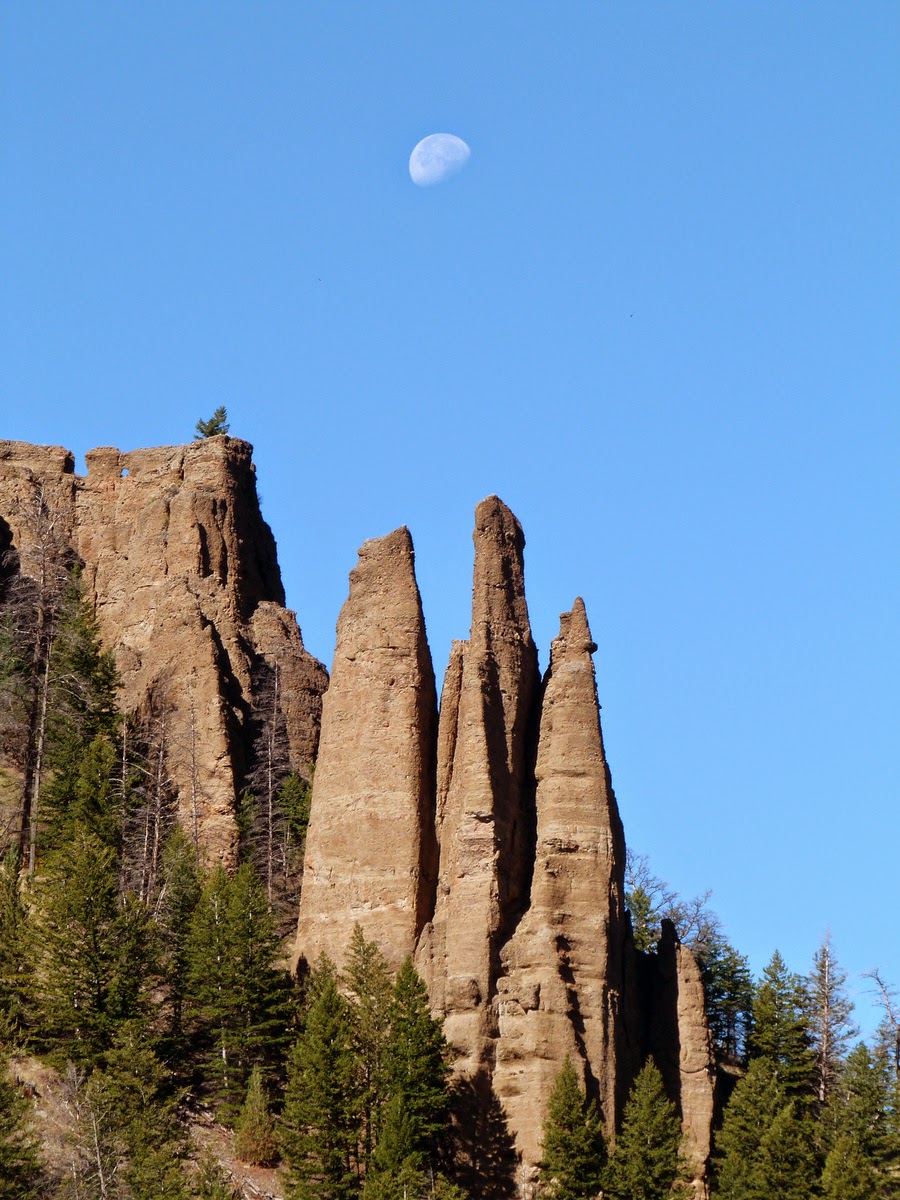 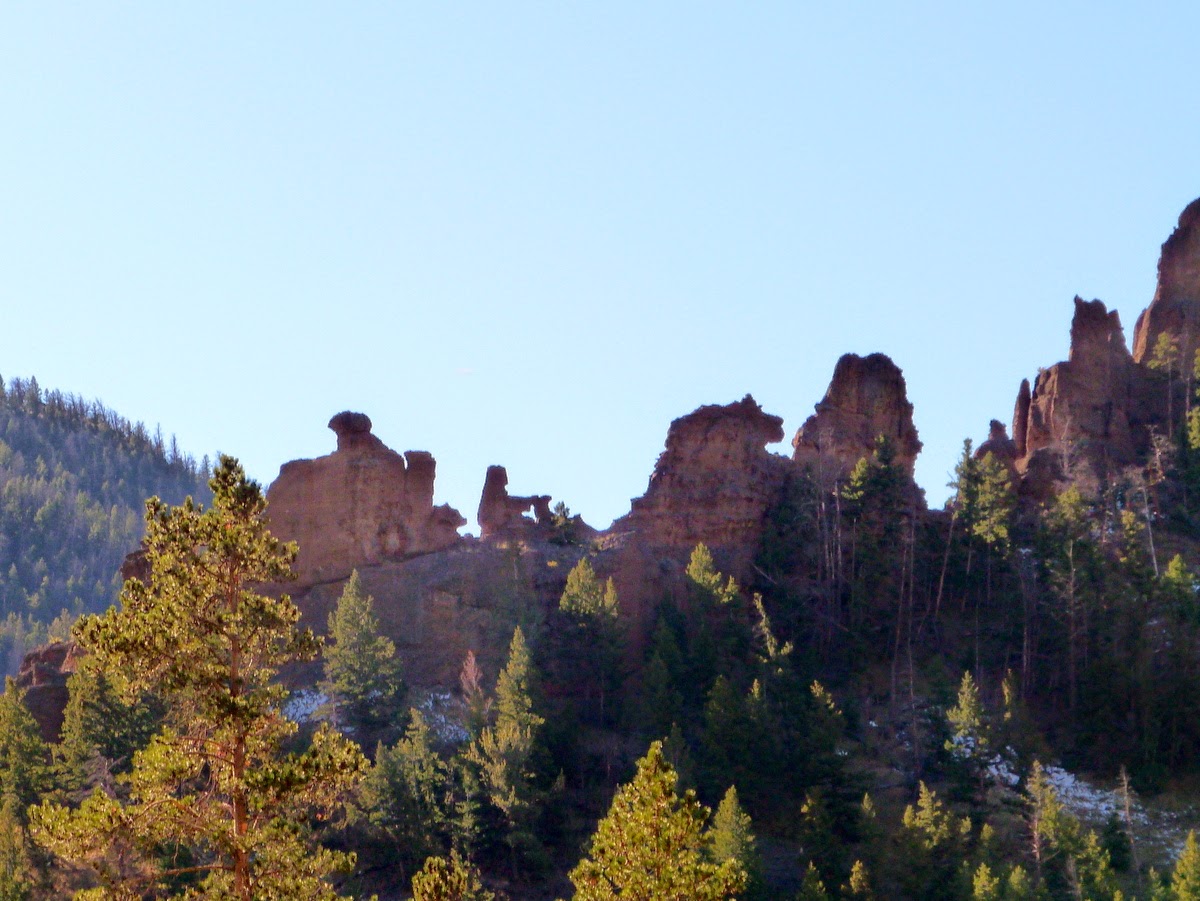 All I can see is a man on a mobility scooter chasing a bear! 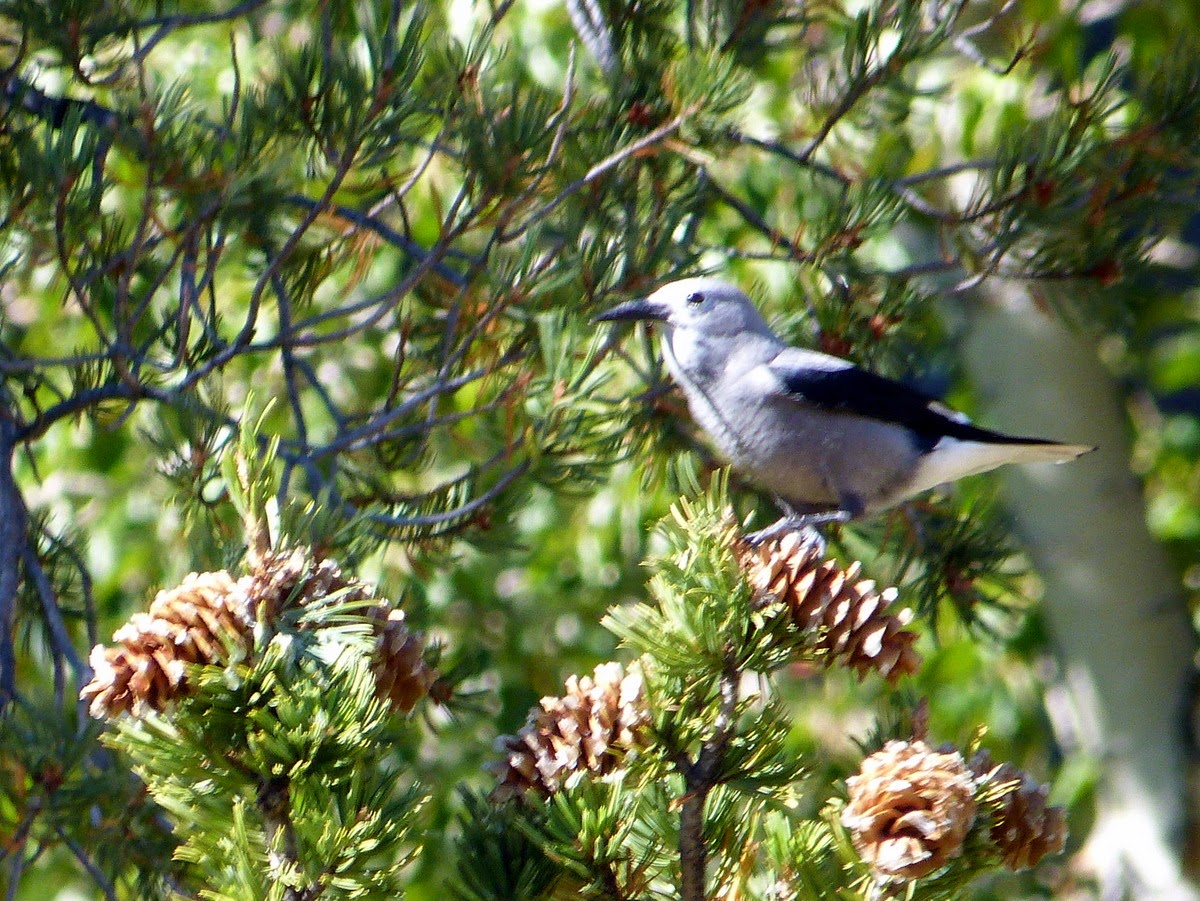 Near Wapiti village we stopped at a filling station and general store called the Red Barn.  We had coffee and cookies, and Richard, who had bought a week’s supply of teacakes the day before, made us all turkey sandwiches as we sat outside.  My phone rang – the dentist perhaps?  No, it was Val just ringing on the off-chance that I might hear it.  She must be psychic with timing like that. 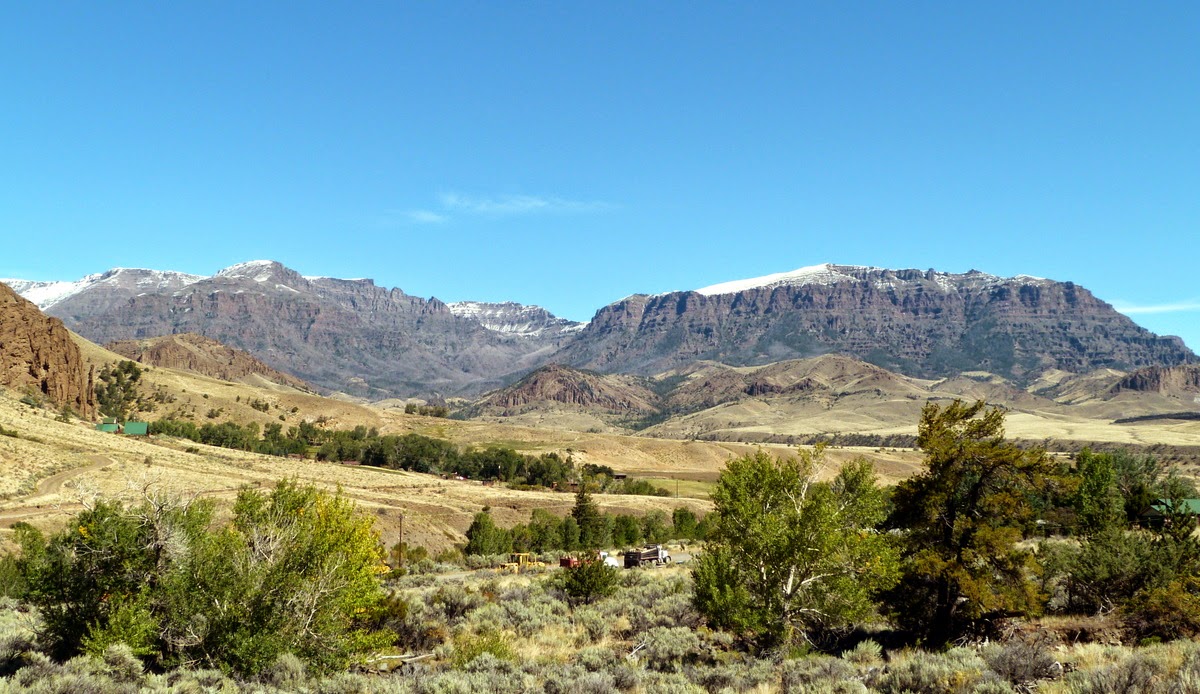 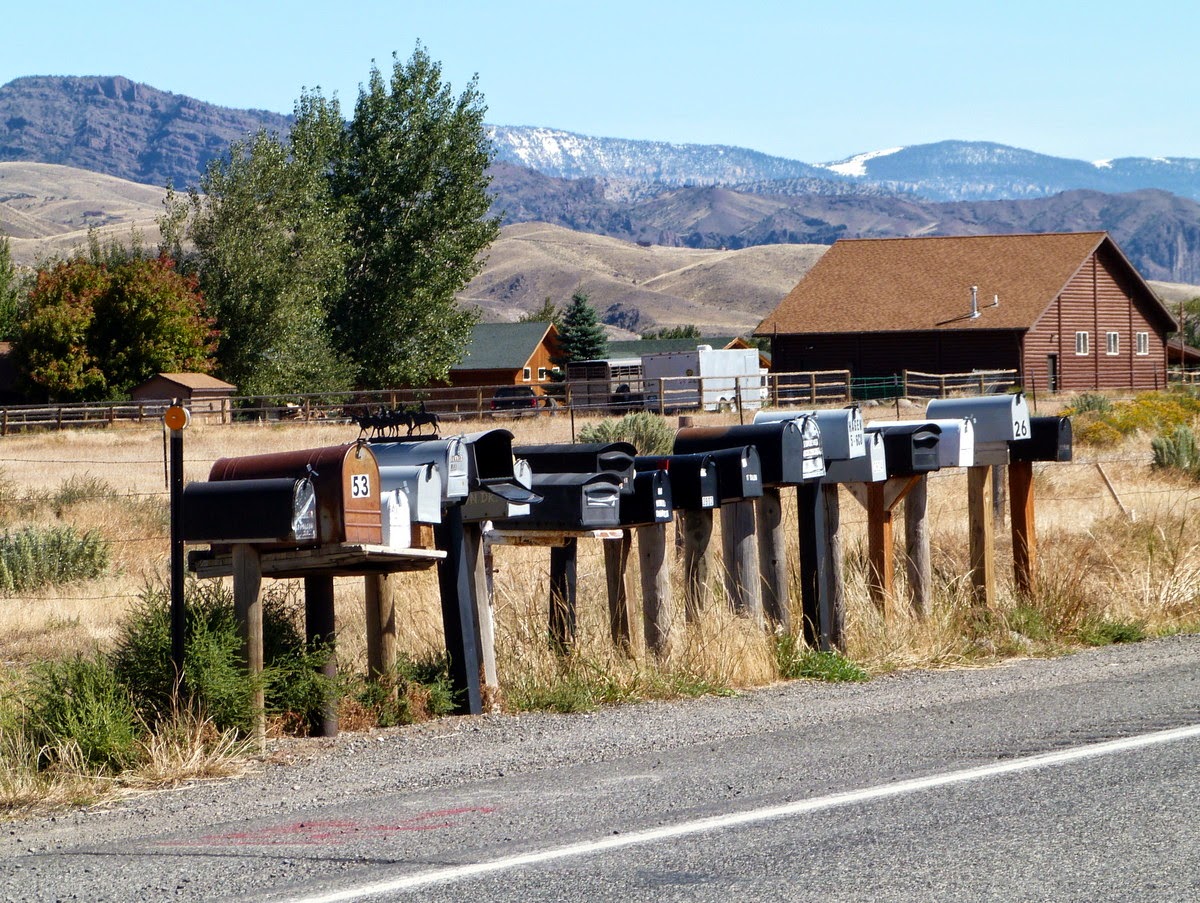 It's easy being a postman 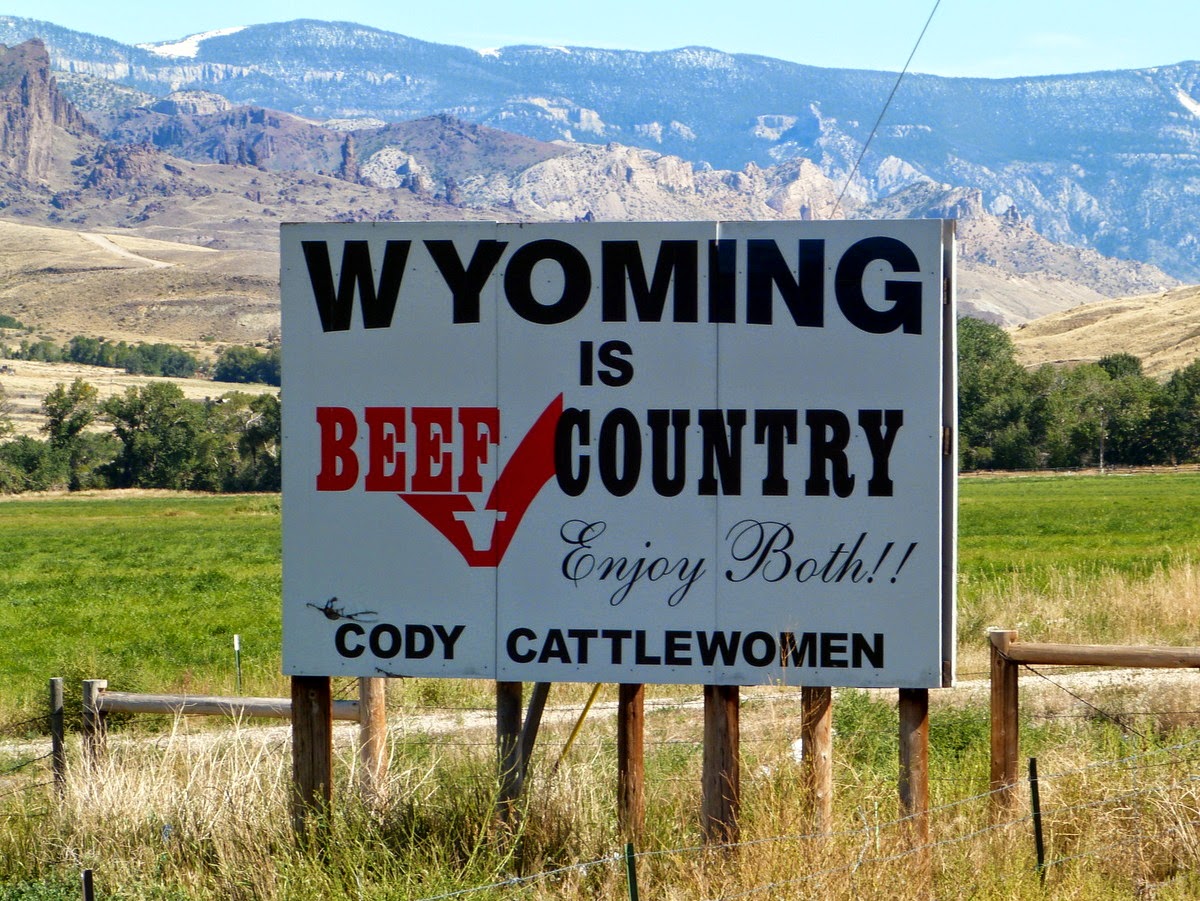 I'm getting mixed messages from this one 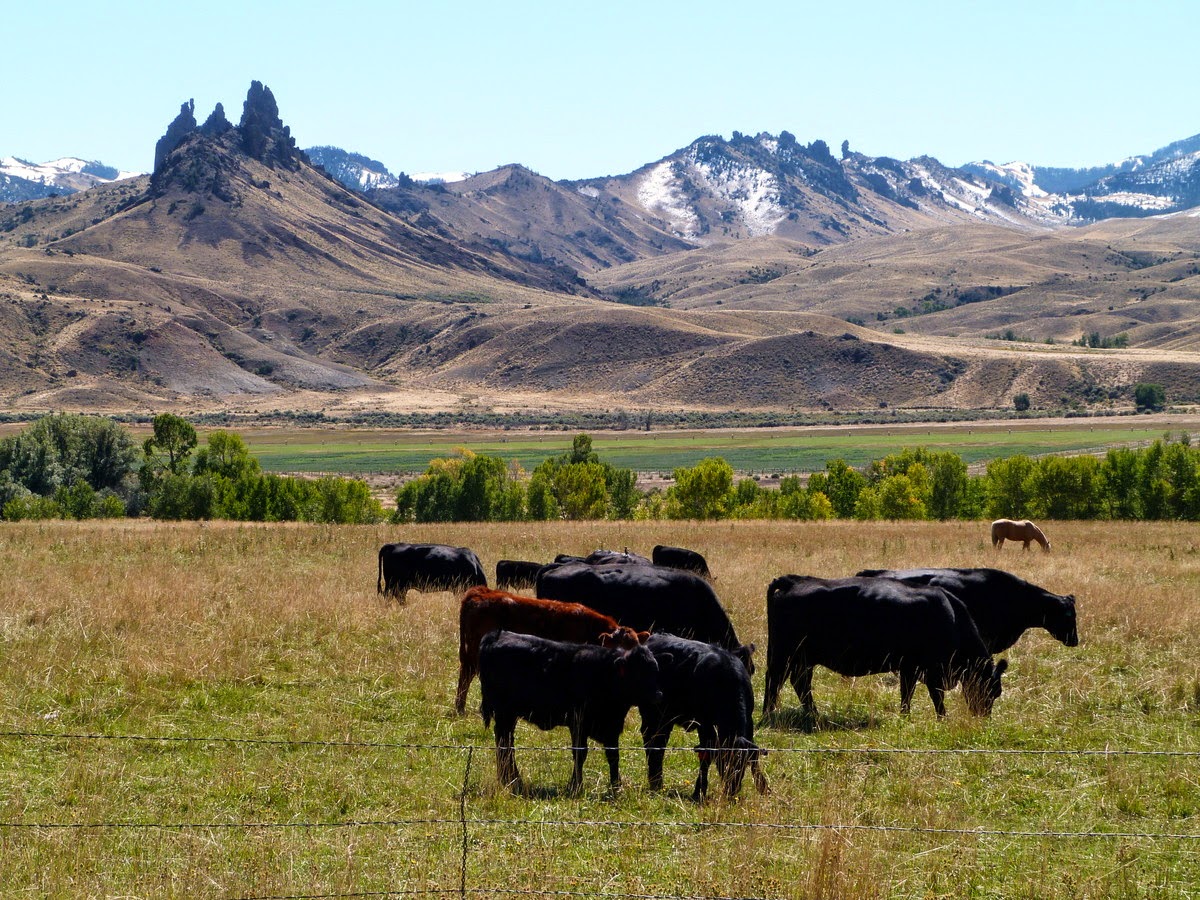 Beef on the hoof 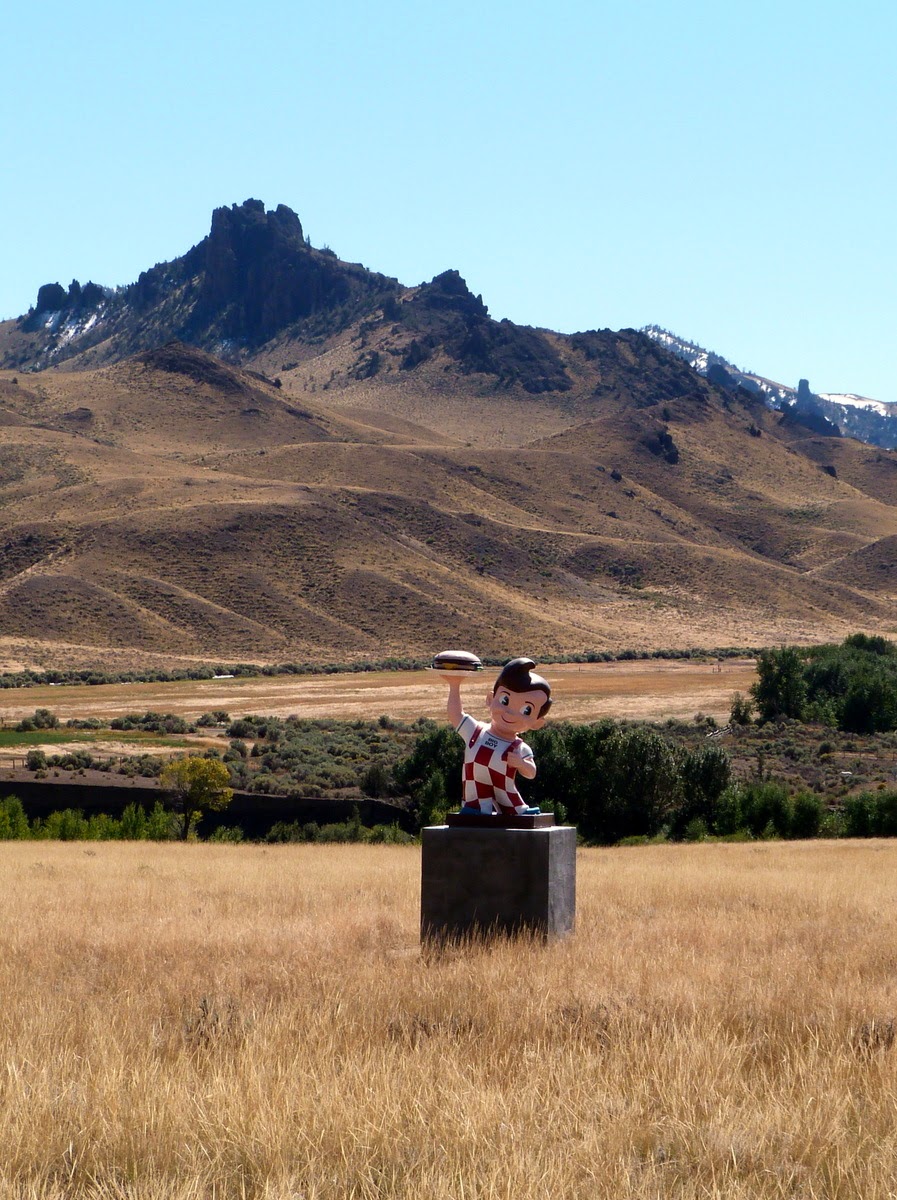 Is this the Pilsbury Dough Man or someone else? 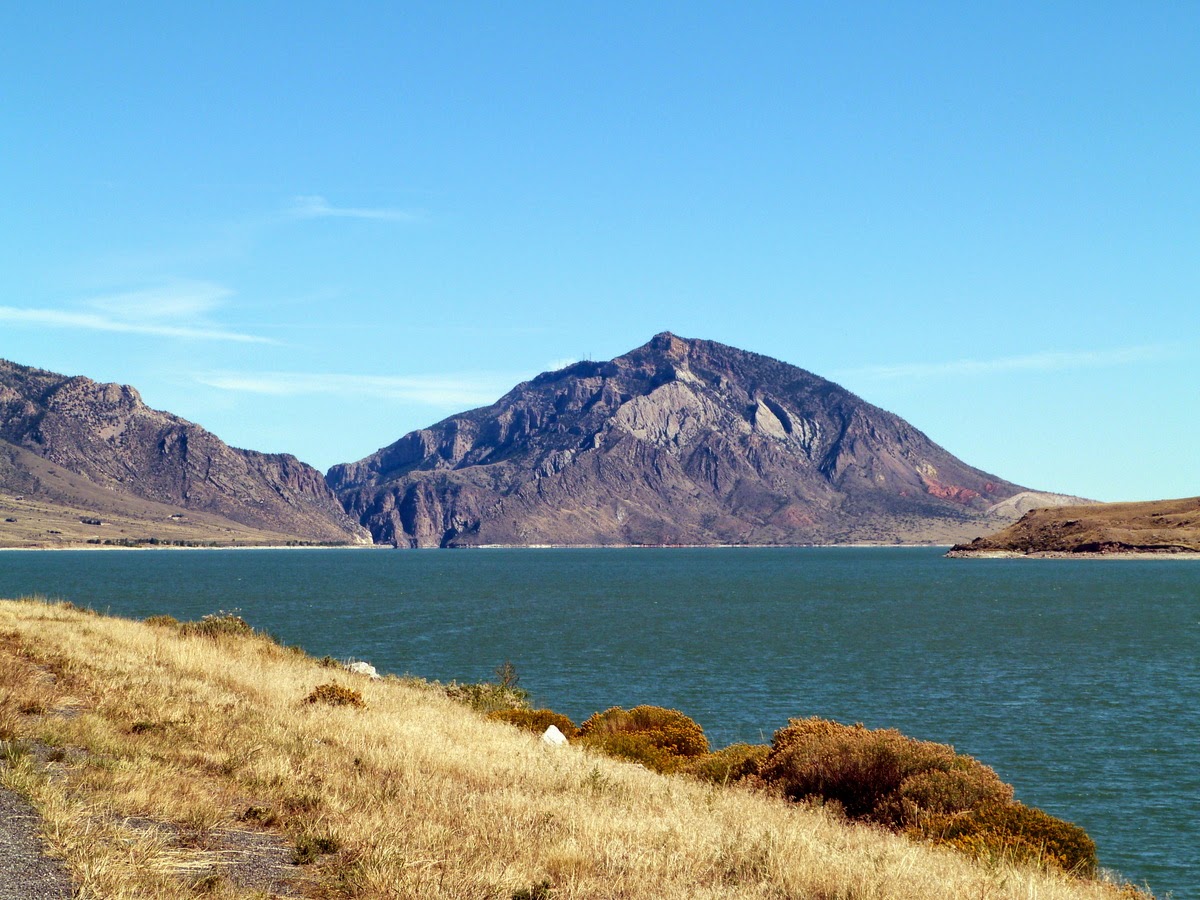 Now the wind picked up and for the rest of the day we had a strong headwind, negating any benefit from the gradual descent.  We reached the Buffalo Bill Reservoir and continued along its shore until we reached the visitor centre, where we learned that the dam was for a while the highest concrete structure in the world.  The trunks of dead trees washed down by the river accumulate behind the dam and are an impressive sight until they’re cleared once a year.  The paving stones outside the centre are all inscribed with the names of people who made a financial contribution to its construction. 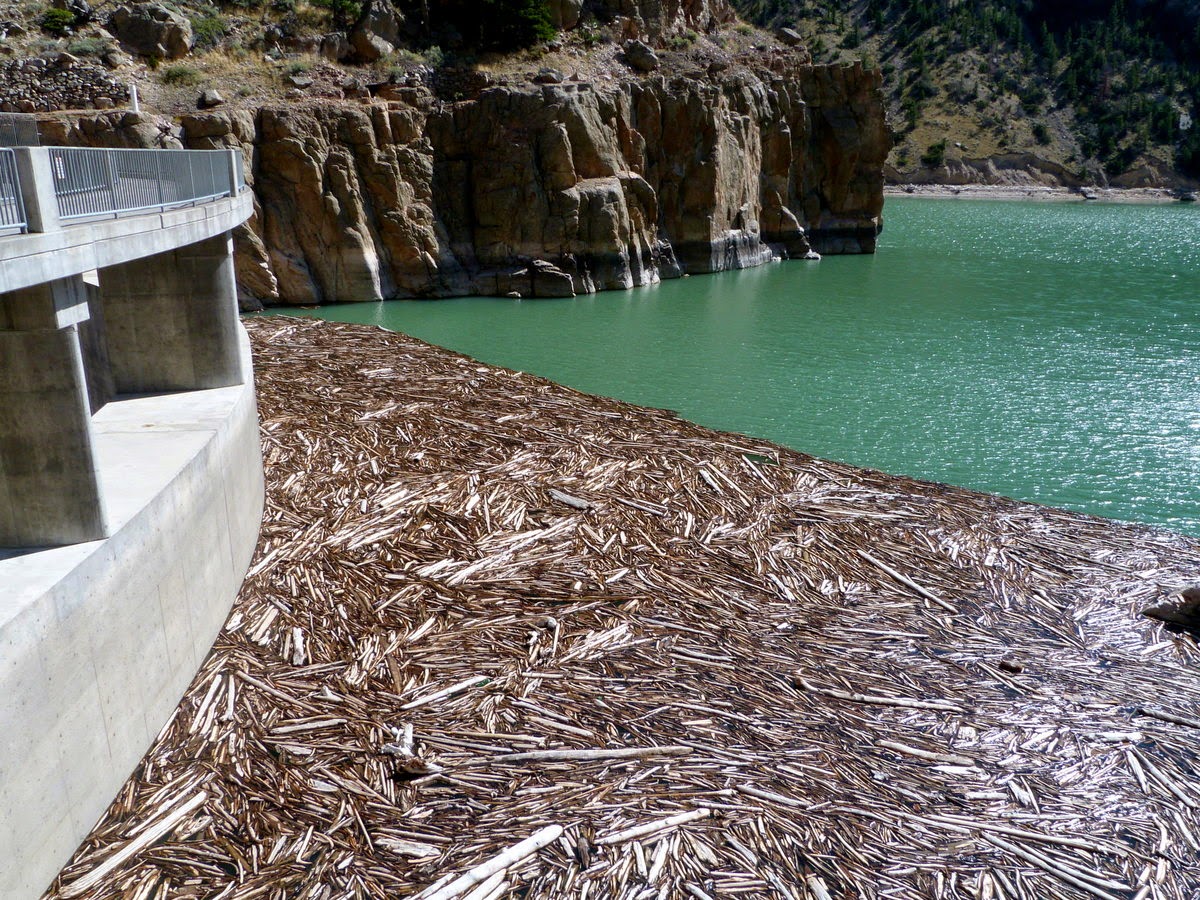 A year's supply of logs 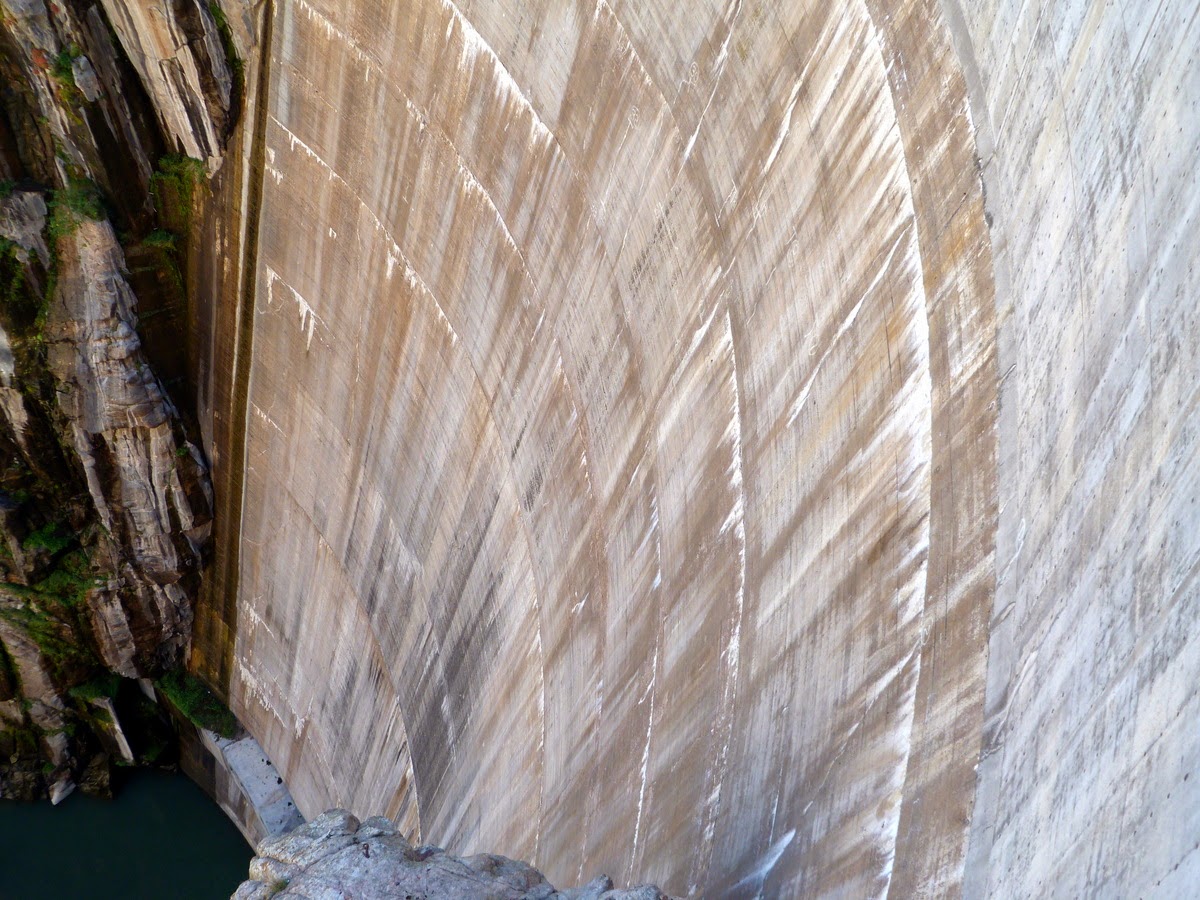 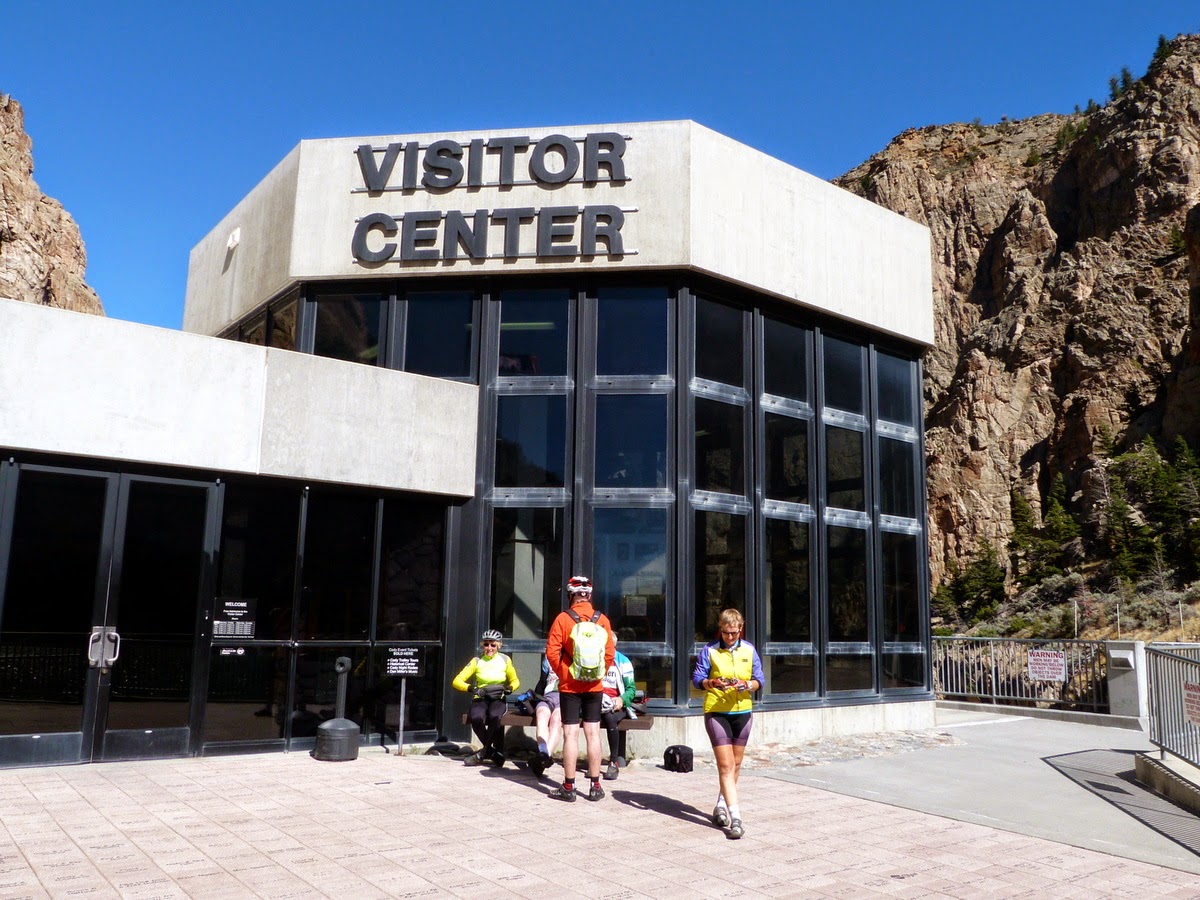 These aren't nice to cycle through... 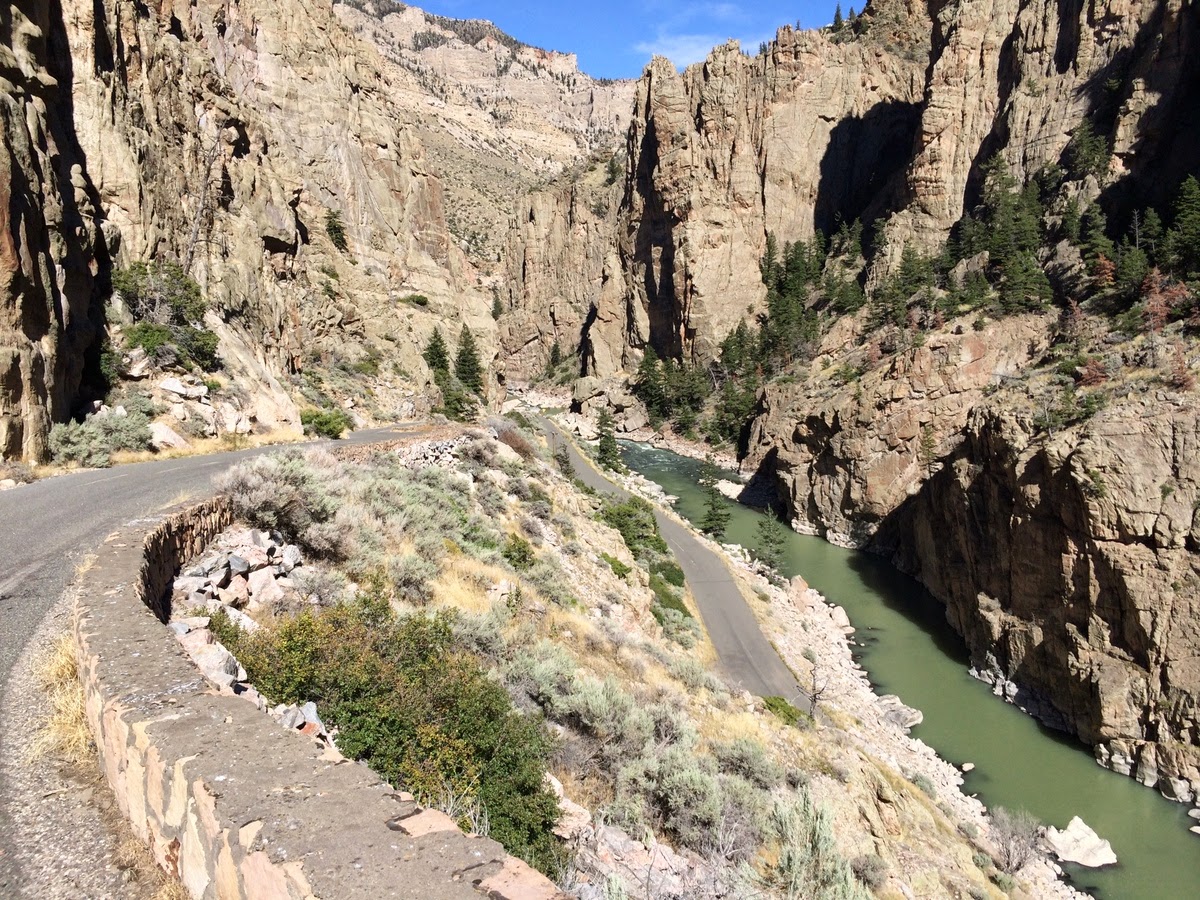 We noticed as we turned into the visitor centre car park that just a little further on was a long road tunnel through the adjacent mountain.  I think Kathryn expressed to one of the officials her concern about our safety cycling through it, and he immediately offered to open up the security gate which would allow us to cycle, tunnel-free, down the old canyon road, which was superb!  We passed the hydro-electric plant and before long were in the outskirts of Cody, founded by Buffalo Bill himself and now Rodeo Capital of the West as well as much more. 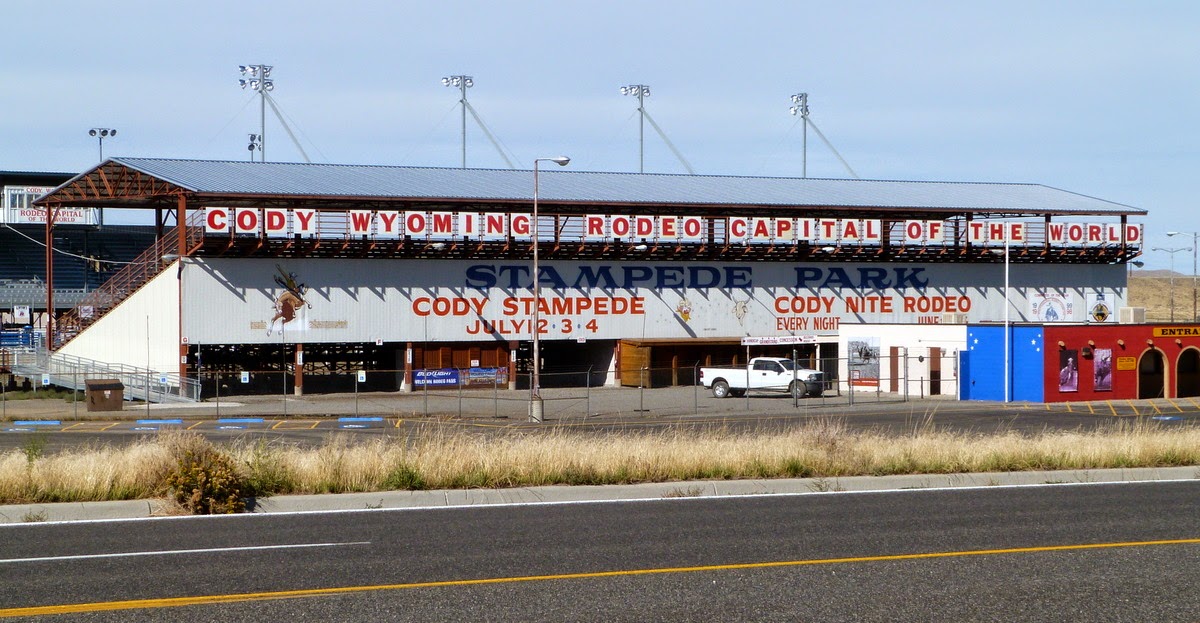 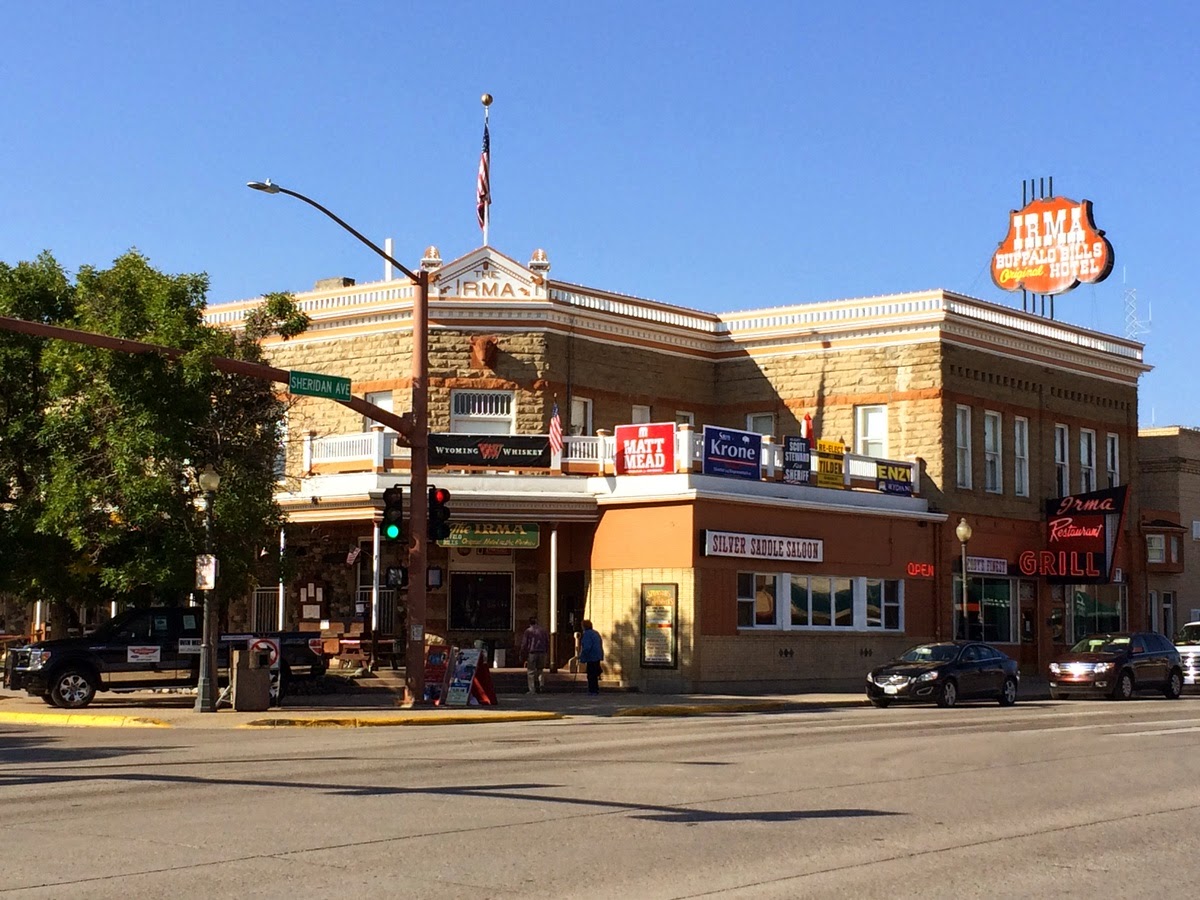 Once in the town centre we found our lodgings for the next two nights – the Irma Hotel, built by Buffalo Bill and named after his daughter.  It’s an iconic feature of the town with a wild west bar, another huge cherrywood bar given to Bill by Queen Victoria, traditional (old-fashioned!) rooms... and outside, every evening at 6.00 pm, a gunfight is staged.  I was eagerly anticipating this but it turned out to be rather less exciting than you might expect.  As I posted on Facebook, “A few people were shot dead in the gunfight, but many more simply died of boredom”.  The ‘commentator’ asked at the outset if there were any retired ‘vets’ in the audience, and I was pleased that Tony, our retired veterinary surgeon, understood the distinction between American and English with no difficulty! 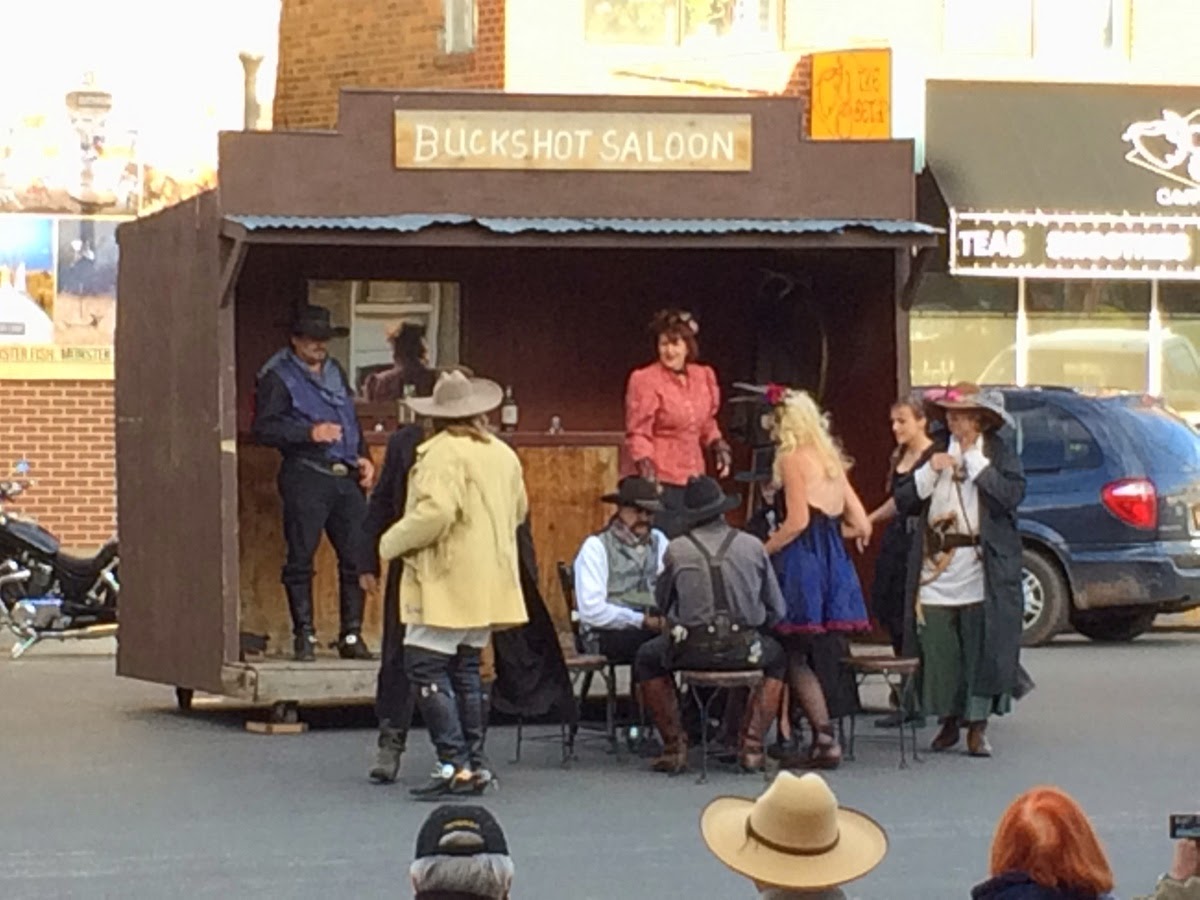 Dinner was in the hotel dining room, near the Cherrywood Bar, and being in the heart of the Wild West I thought a steak would be just the ticket, but I’m afraid it was too juicy, or should I say fatty, for me.  Tomorrow would be reserved for seeing the town, and in particular the massive Buffalo Bill Centre, five museums in one.