As we arrived at the Running Bear Pancake House for breakfast (after our now customary early start!), another large group turned up.  Richard was on the ball and got inside first so we didn’t have to queue, and got served first – we wanted to be away quickly as today was yet another longish day.  Two enormous pancakes (buckwheat this time) with fruit, maple syrup and boysenberry syrup were enough for me. 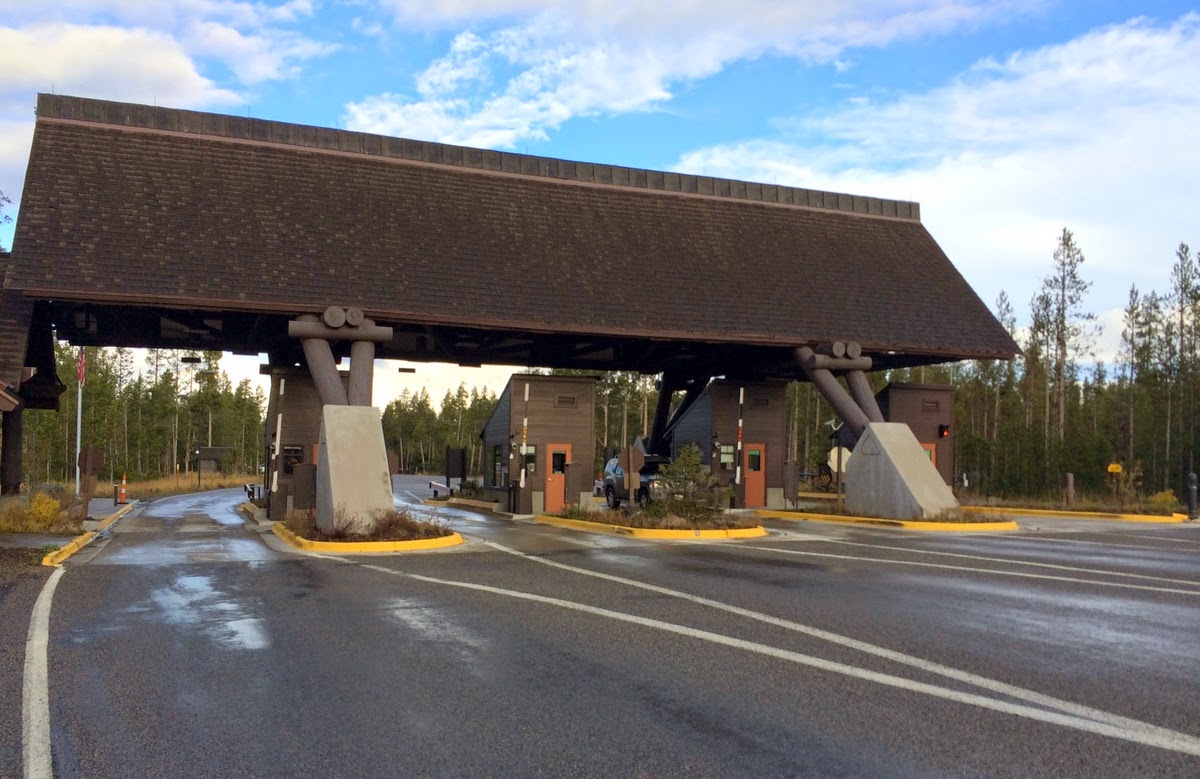 Entrance to the National Park just outside West Yellowstone

It was another cold morning.  Our first stop, just outside town, was the West entrance of Yellowstone National Park.  I produced our annual passes and to my surprise the ranger wanted to see my ID!  Luckily I had my passport handy.   Once through, I turned around to take a photo and the bike decided to twist and fall over.  A fully loaded touring bike isn’t light, so it took an  effort to get it vertical again, by which time everyone had disappeared.  After four or five miles there was a loop road to the left (Riverside Drive) which took us off the busy main road and led alongside the Madison River. 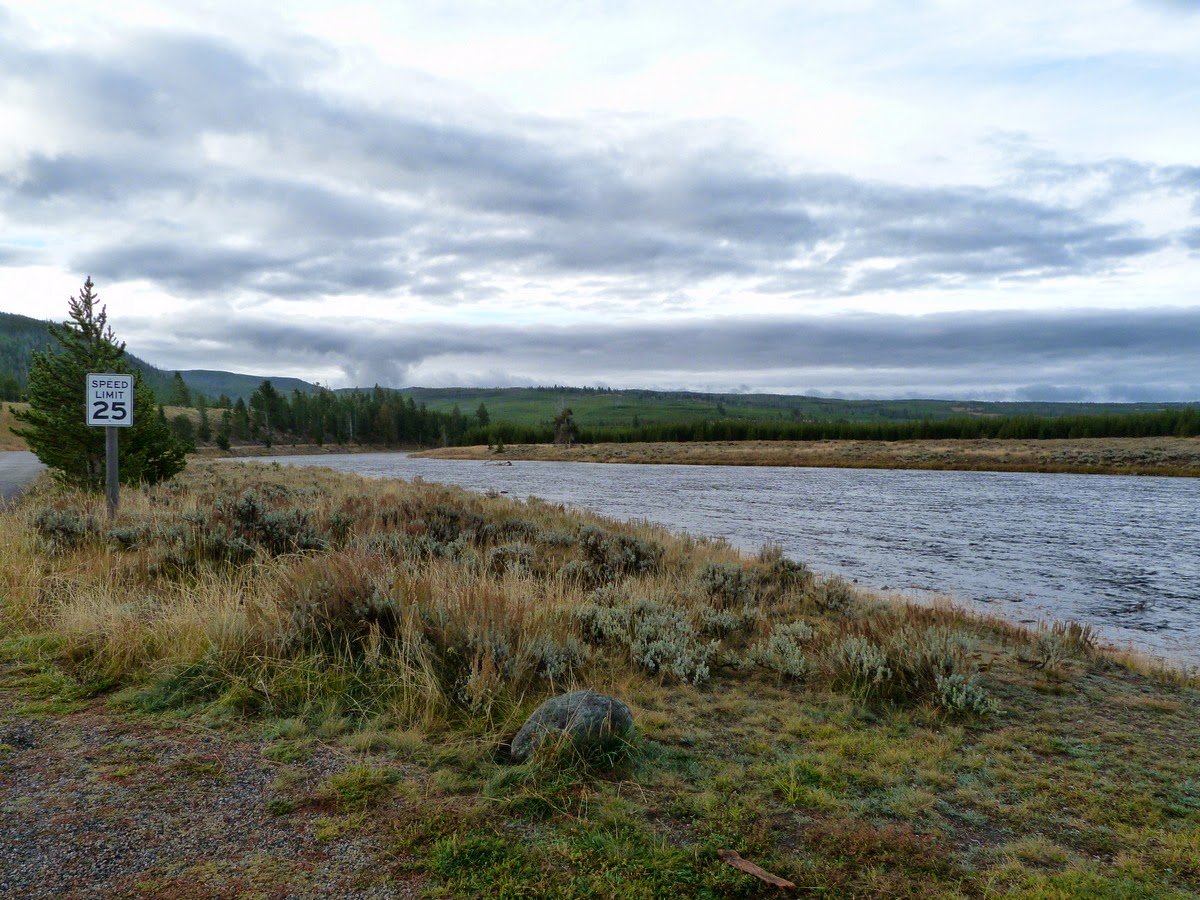 Once back on the main road, the cold weather was producing ribbons of mist on the hills and the river, which looked very atmospheric.  I don’t know whether the river water is still warm from all the hot water which pours into it several miles upstream at Excelsior Pool.  When we arrived at Madison Junction we were back where we had been almost two weeks ago, and we repeated our original route up past Terrace Springs (dozens of Japanese tourists with cameras on tripods) and Gibbon Falls.  Soon after the falls I heard a familiar-sounding bird call from the river and turned just in time to see an American Dipper flying downstream.  It was about the same size as its European cousin, but a uniform slate-grey colour. 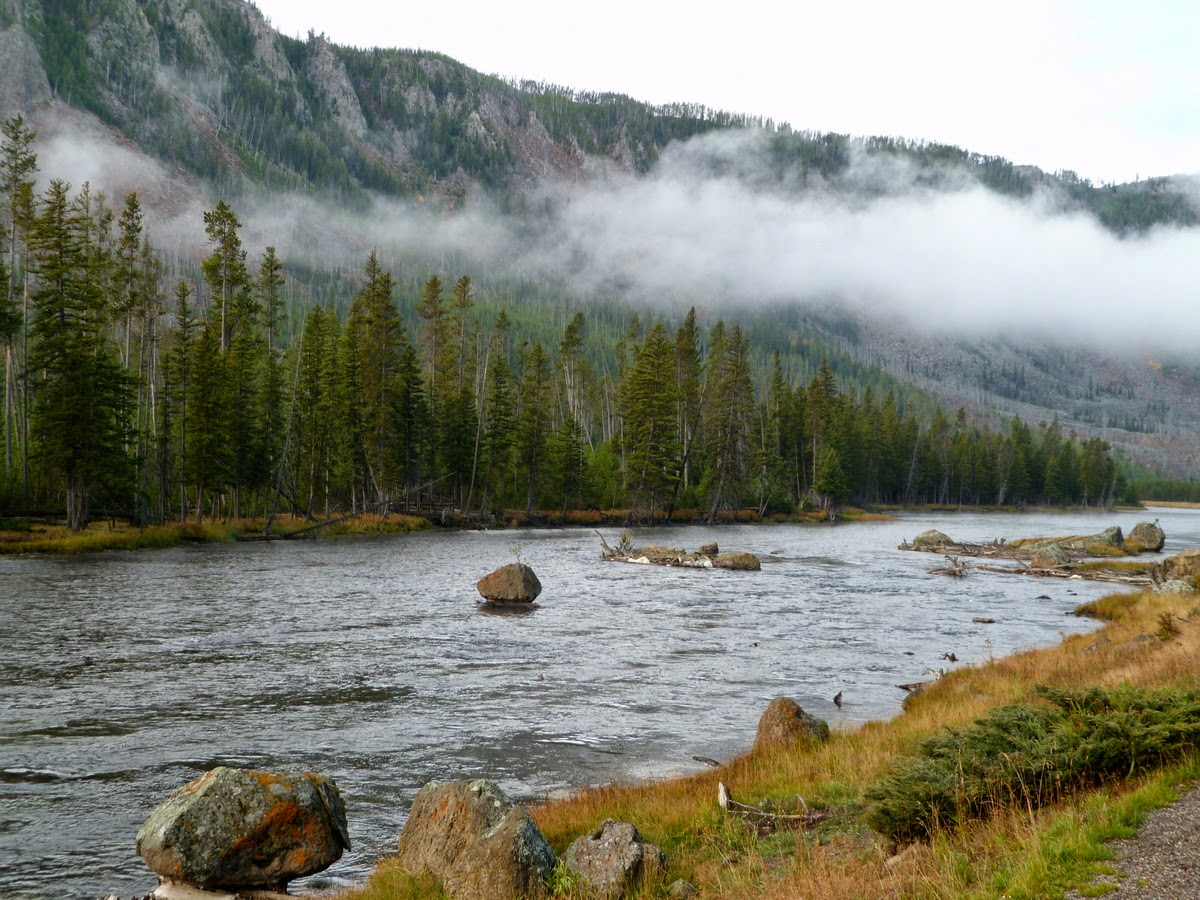 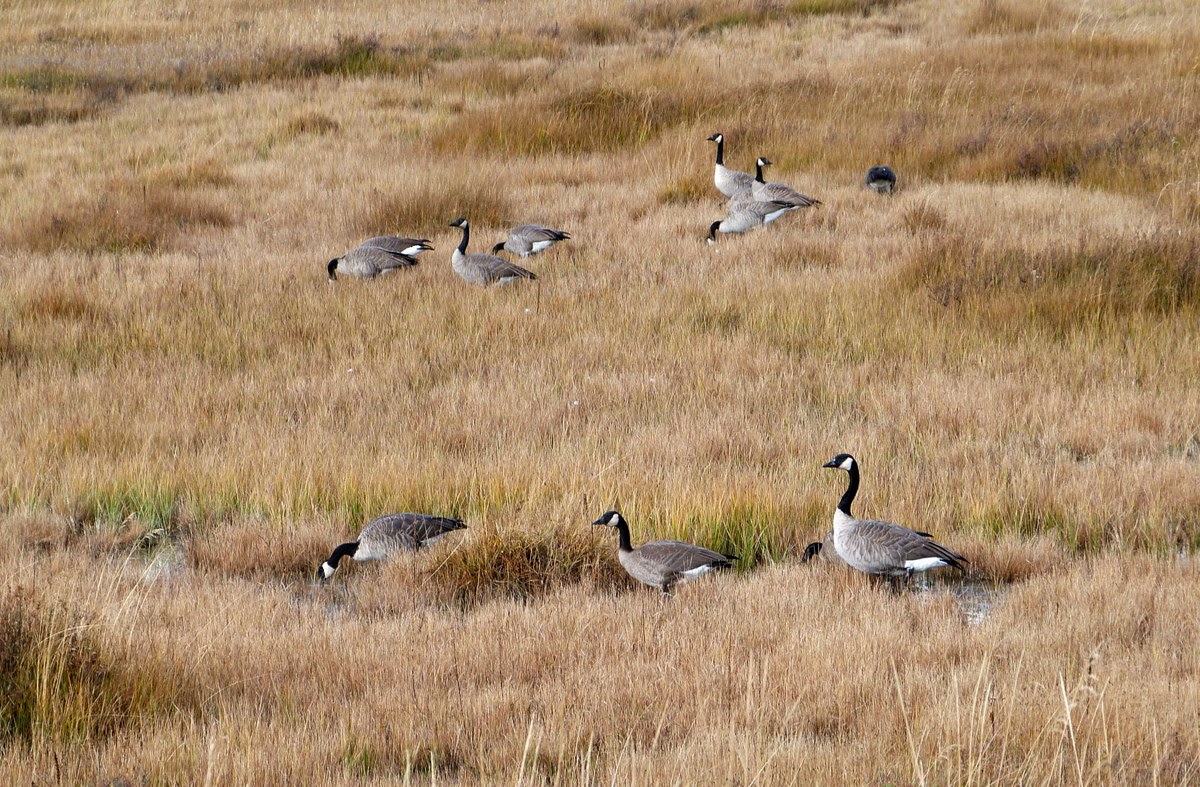 When we reached Norris Hot Springs this time, we (Jeff and I) turned off to look at the hottest geyser basin in Yellowstone.  Porcelain Basin (it sounds like a bathroom fitting) is quite spectacular with turquoise pools and several steaming vents.  As we were returning to where we’d left the bikes, we wondered why so many tourists were taking an interest in them – and then found that they were watching a Raven which had opened Jeff’s saddlebag to get at the biscuits inside.  Everyone except Jeff was very amused! 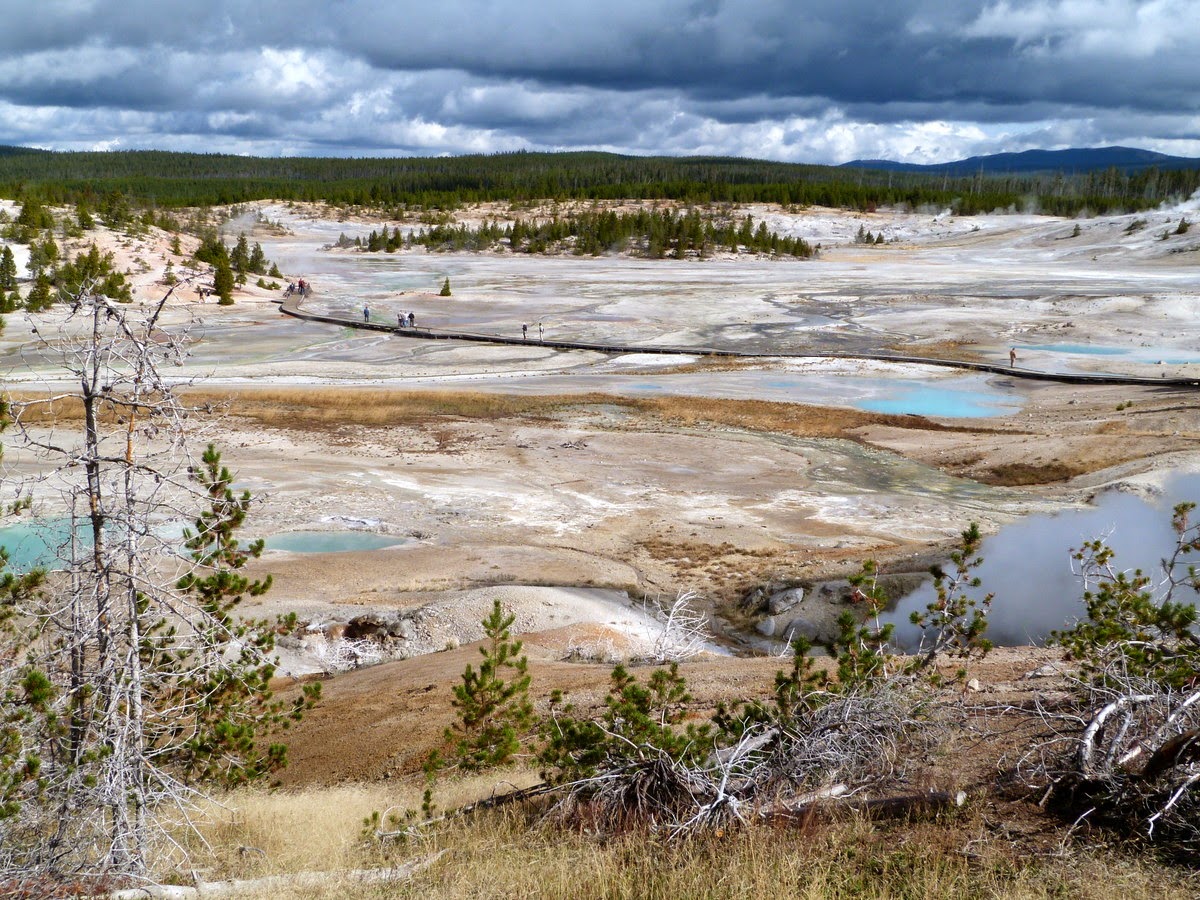 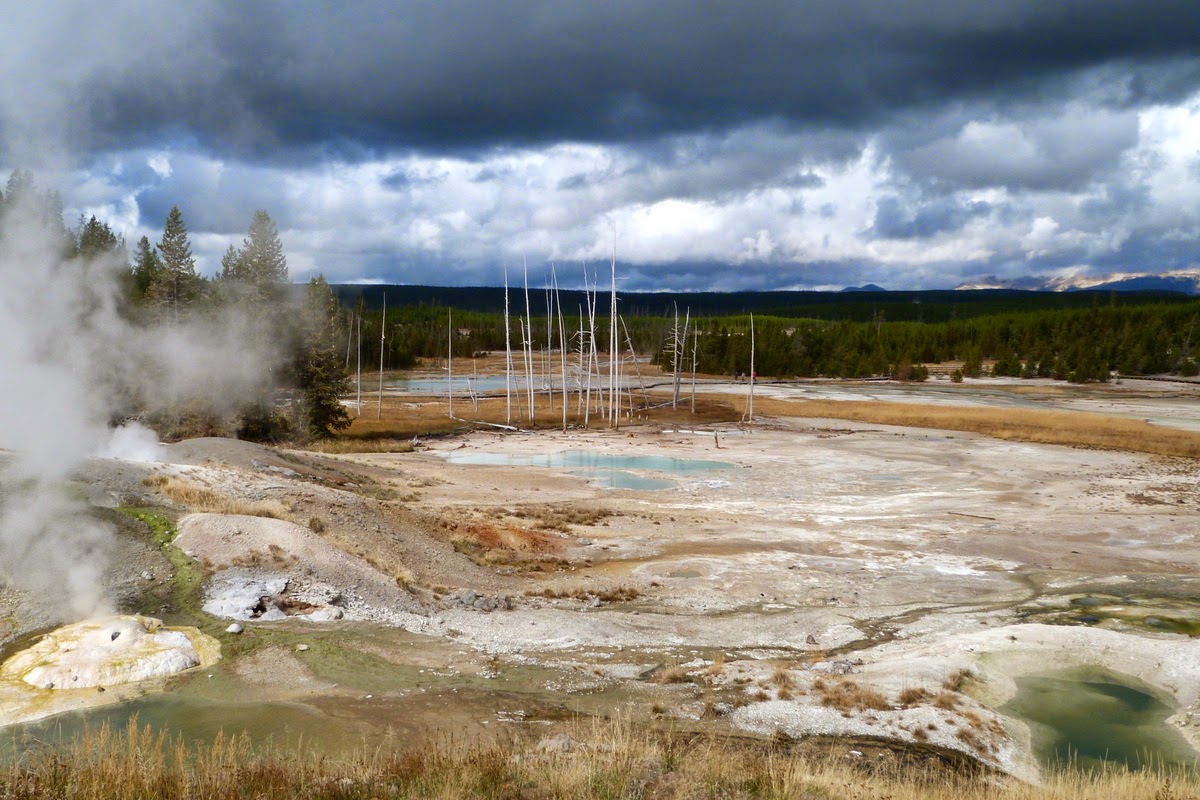 We carried on along the now-familiar Virginia Cascades route and this time Jeff managed not to fall of his bike.  It had taken some time to find out what was causing his chain to jam, but eventually he found a cycle shop in Bozeman a few days ago who fixed it by re-spacing his chain rings, so now he could pedal in the granny gear with no worries.  After the long climb to over 2,500 m above sea level came an exhilarating descent towards Canyon Village.

As the road got steeper and started to leave the heavily wooded area, a movement on the right caught my eye.  I looked across and saw a BIG bird flying into a tree.  I hit the brakes hard and left two black lines on the road as I stopped, then looked back to see...  a huge Great Grey Owl perched on a branch next to a tree trunk.  It even stayed stilled and looked right at me while I got out the camera and took a picture.  A magic moment, and the best bird of the tour.  Five seconds earlier or later and I would never have seen it. 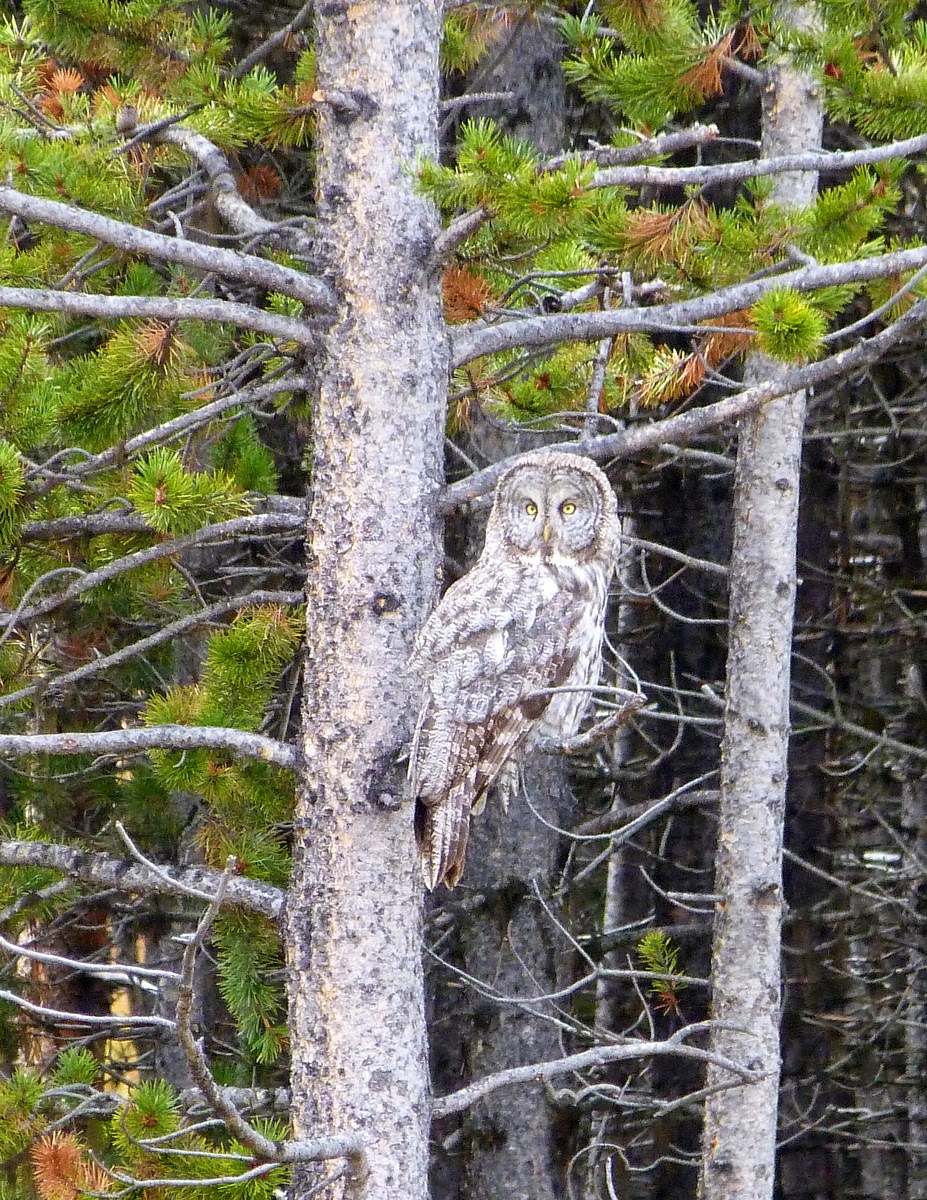 I arrived at Canyon grinning from ear to ear, bought some lunch from the general store and ate it with Joy, Andy and Jeff outside while tourists admired (and chatted with us about) the bikes.  As i set off, a shower wetted me, but not too badly.  There were a few Bison about but otherwise not much, although I had high hopes that the Hayden Valley might produce something really noteworthy like a bear.  I passed Joy who was stopped overlooking the river, not realising that out of my sight were Trumpeter and Whistling Swans.  An obliging Snipe partly made up for this.

But my wildlife hopes were to be unfulfilled –several times I came across tourists gazing across the nearby countryside, and stopped to see what they were looking at, but on every occasion it was either nothing or another distant Bison.  No bears.  Tony and Madeleine, much later in the day, became the only tour members to see one when they spotted a distant Grizzly along this section much later in the day.

Arriving at Lake Village I stopped at the Hotel, assuming (correctly) that there would be others at the Deli.  At the counter I asked for a banana and a carton of milk.
“Yogurt?”
“No, milk, please.”
“Do we have that?”
“Yes, it’s there.”
“Where?”
“THERE!”
“Oh yes.  That’ll be $3.65.”
“Could I have something to drink the milk out of?”
“Would you like a bag?”
“I’d rather have a cup to be honest.”
Not the sharpest knife in the box, as they say!

We finally checked in at the Lodge, which is a fine building, but the cabins don’t even have a proper footpath leading to the door.  Deborah’s bike needed fixing – the gear cable was completely knackered, but Richard got it fixed with a minimal amount of assistance from me and Tony. 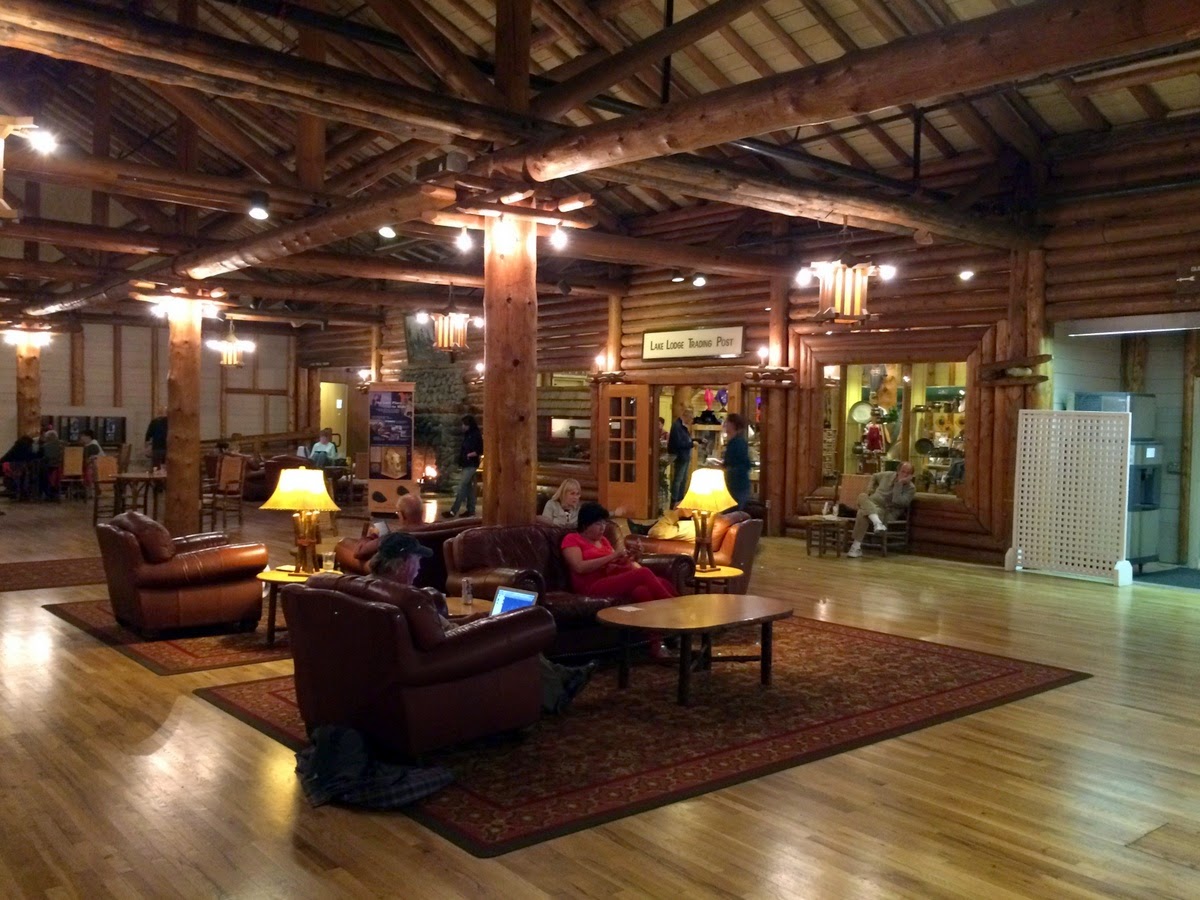 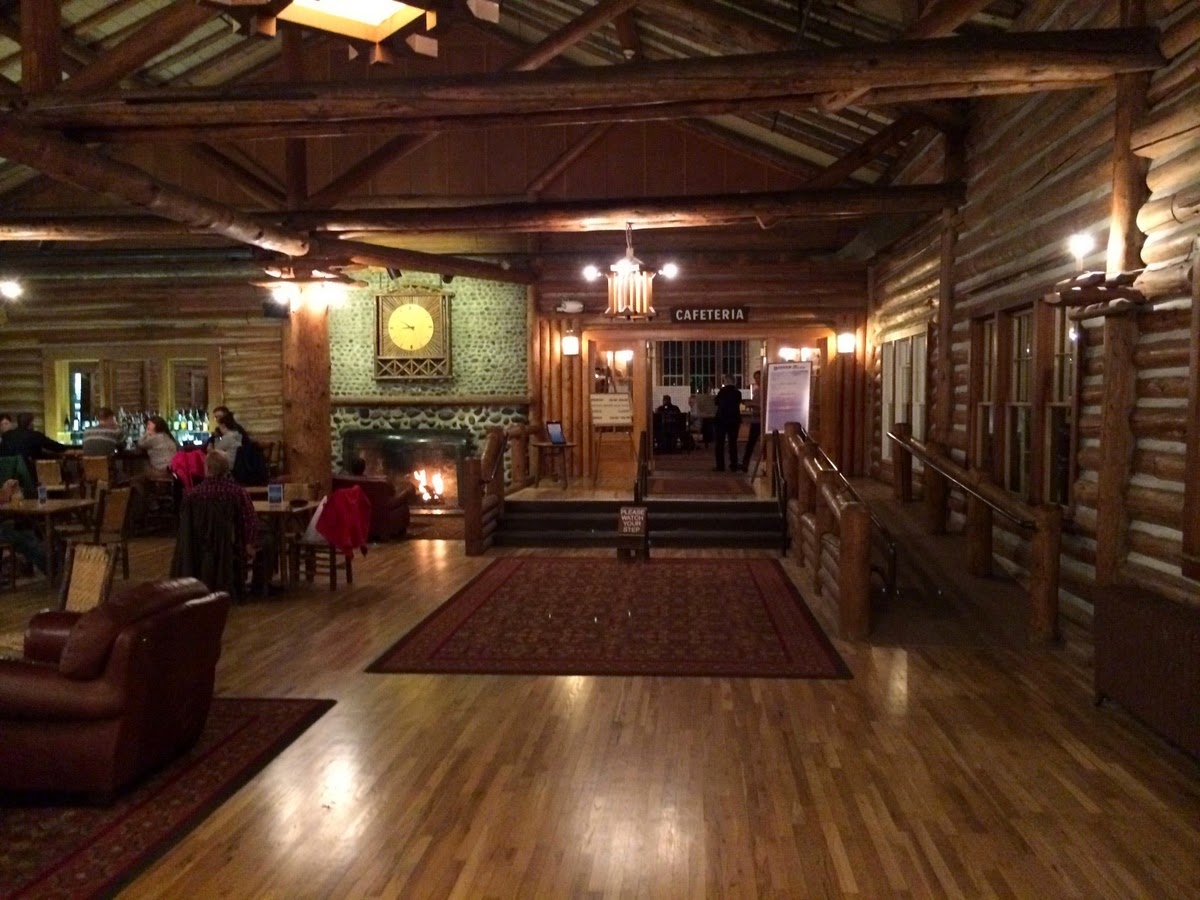 We enjoyed another clear sky after dinner, then off to bed for a good night’s sleep before the last long day of the tour, and one which would bring another special wildlife moment and some more great photos...