Breakfast at the Lewis & Clark Motel is nothing if not simple, so I took Kathryn’s advice and went to the Bagel shop store.  I’ve never had a bagel before, but she said they were a favourite of her husband’s so it seemed a good idea to try one.  I found the experience to be rather like a friendly Spanish Inquisition:  having decided on ‘The Works’, I was bombarded with questions like “What kind of bagel?”, “What filling?” “Hot or cold?” “Eat in or to go?” and lots more.  I got a strawberry-flavoured cream cheese filling to go, a bargain at $2.50, and left the store with my head still spinning. 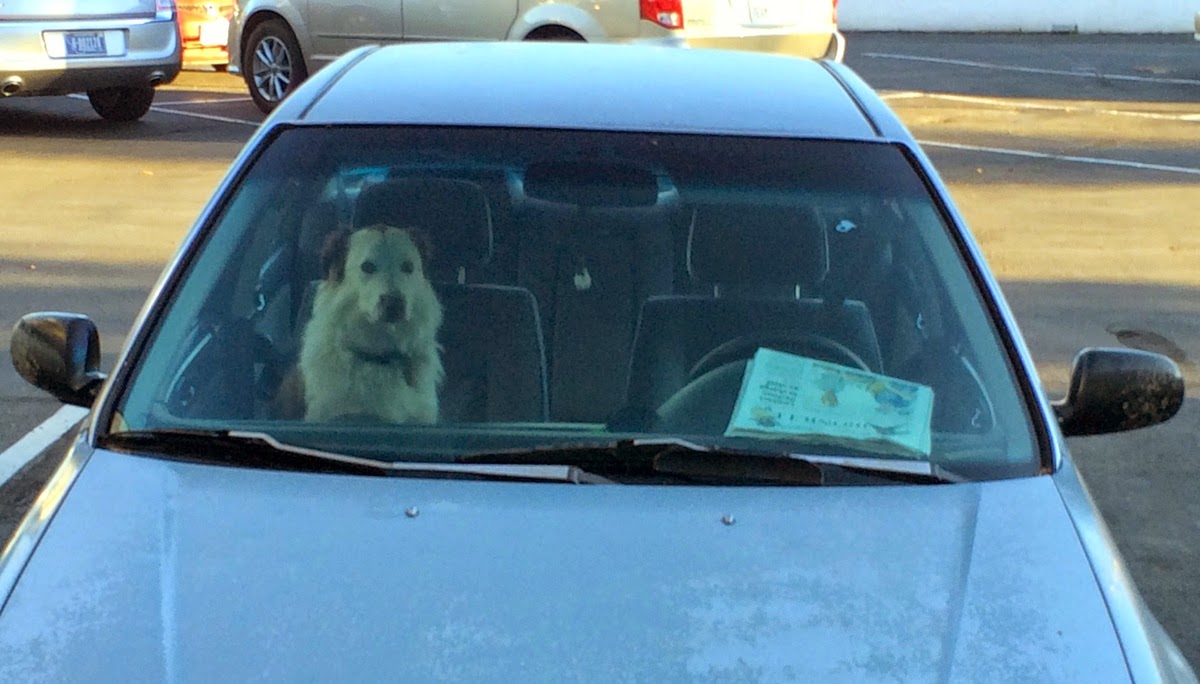 Had me fooled for a moment...

After a photoshoot for the benefit of Hewitt Cycles (Tony, Deborah and I all had Hewitt Cheviot touring bikes which are superb) we all set off at a cracking pace behind our leader Richard, so that after 6 or 7 miles we’d averaged over 15 mph and dropped one or two!  The commercial outskirts of Bozeman go on and on and on, but finally we left the town heading uphil, passing the golf course (and a dead Mule Deer) and into open agricultural country. 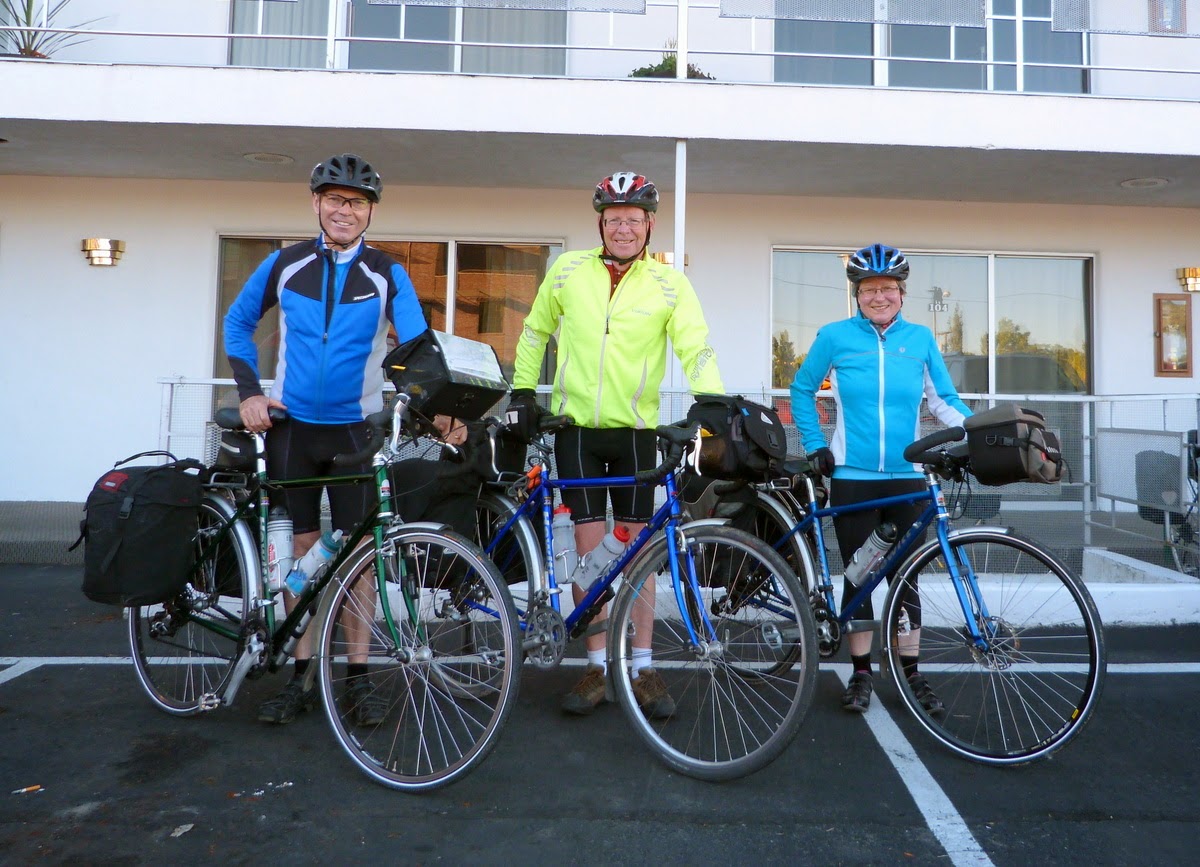 The Hewitt cyclists - Tony, me, Deborah 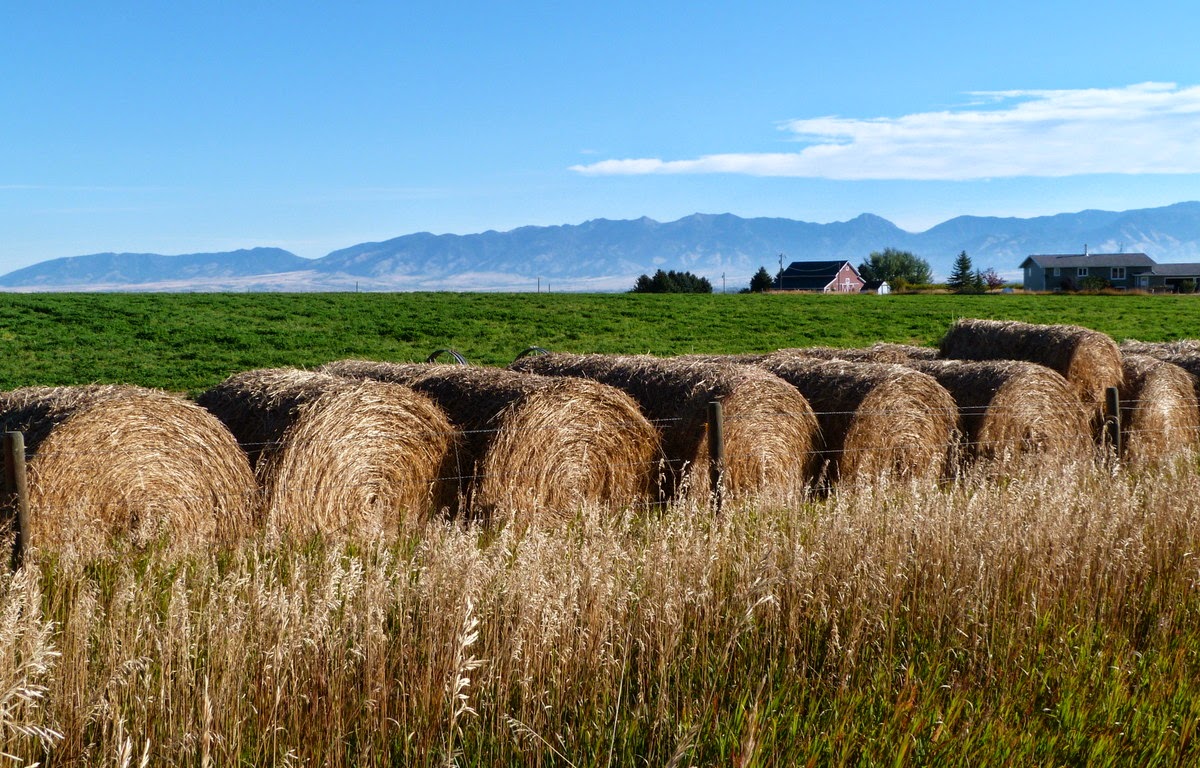 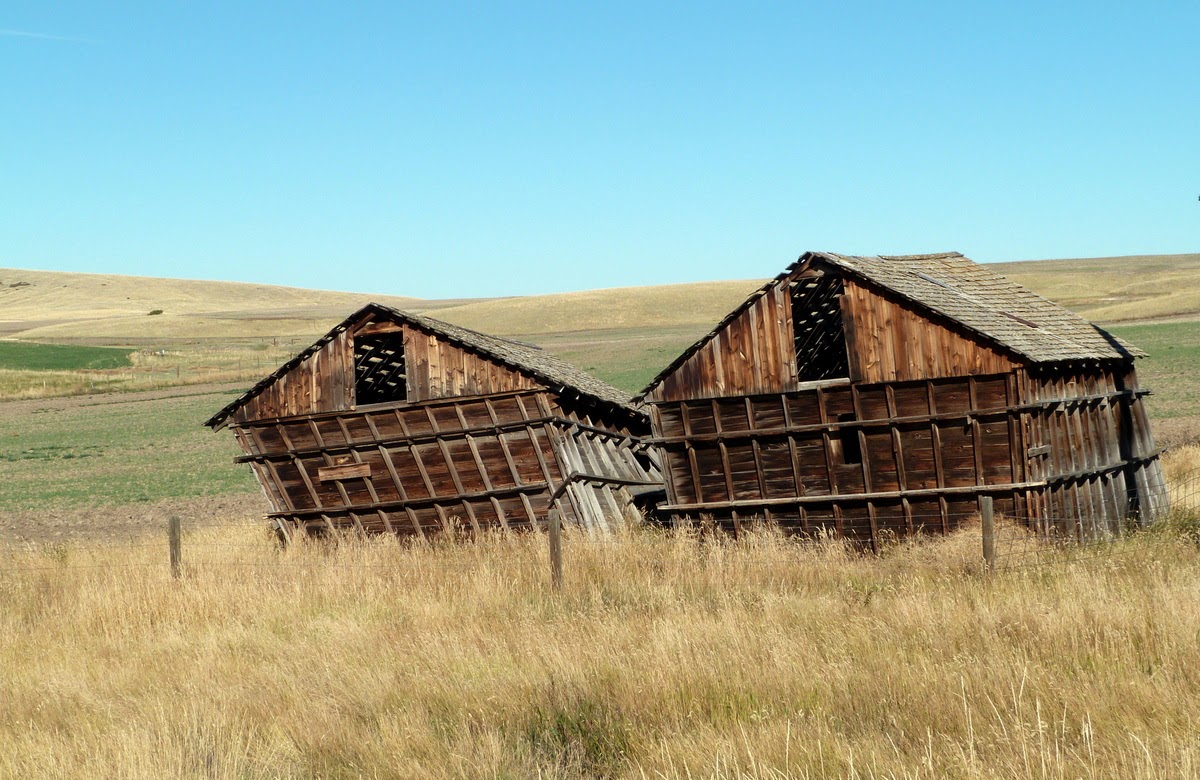 At around 12 – 14 miles we reached the Madison River, where lots of anglers use big canoe-type boats to fish from.  A group of White Pelicans seemed unperturbed by the fishermen nearby, and a Great Blue Heron flew effortlessly over the river to disappear into the reeds.  The scenery was very dramatic as the road climbed and then left the river.  My Garmin showed a left turn but it was a dirt track and I decided to continue straight on, which was the right decision as otherwise I’d have missed out Norris, where there would be something to eat.  (Not to be confused with Norris Springs inside Yellowstone National Park, even though to add to the confusion there are some hot springs near this Norris too.  They were closed for the season though.) 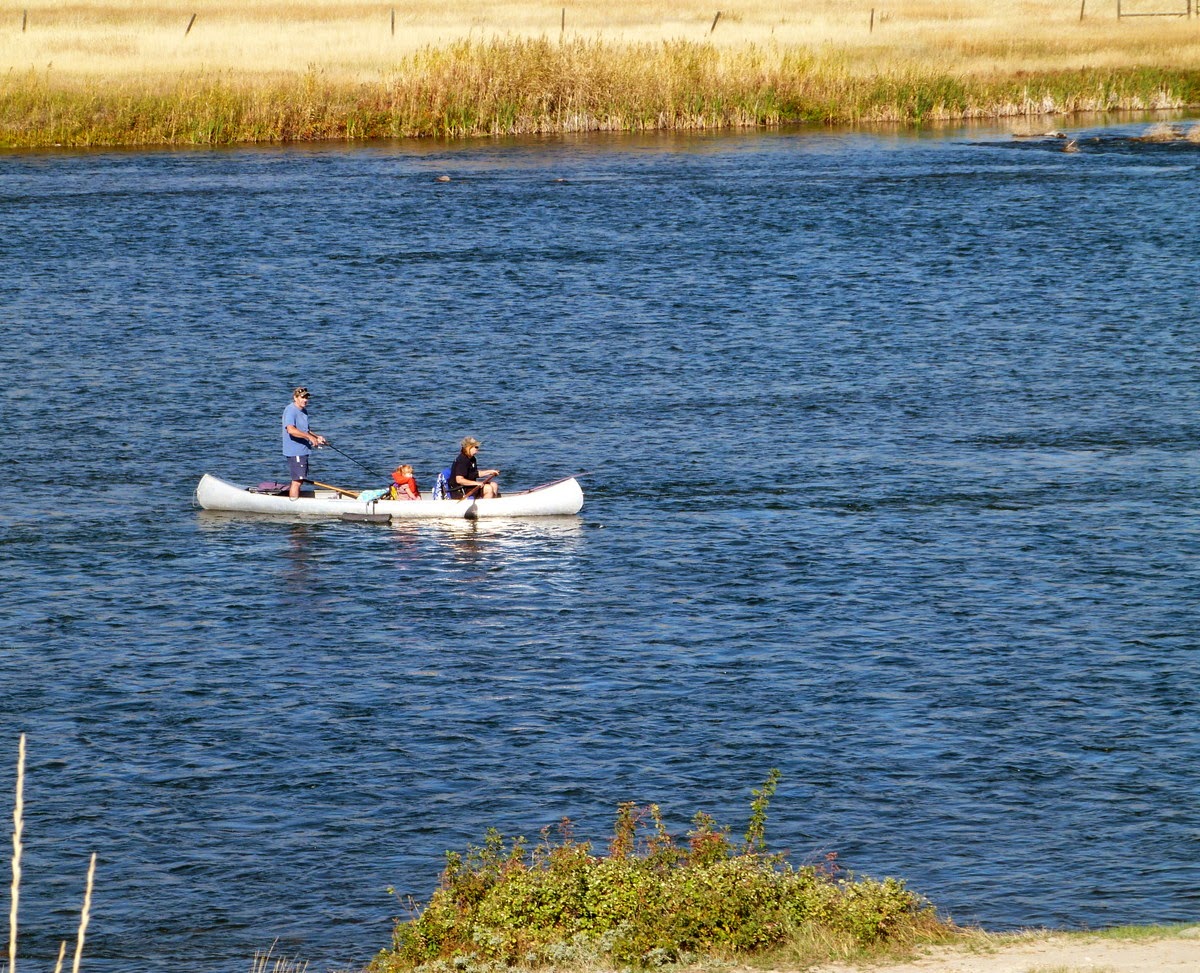 Fishermen on the Madison River 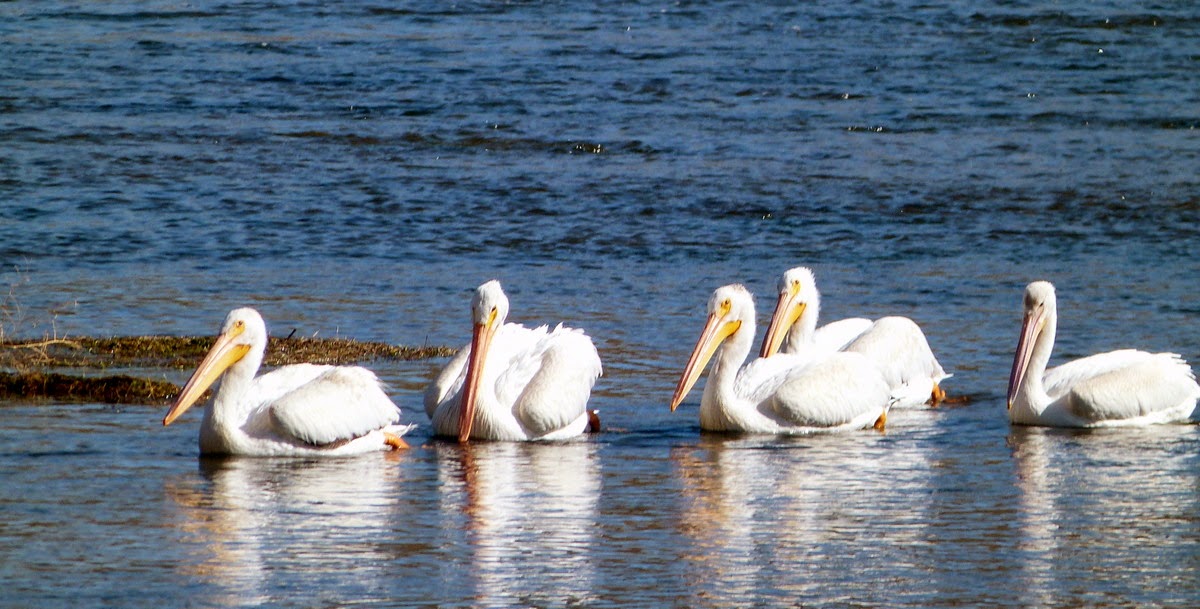 What a wonderful bird is the Pelican... 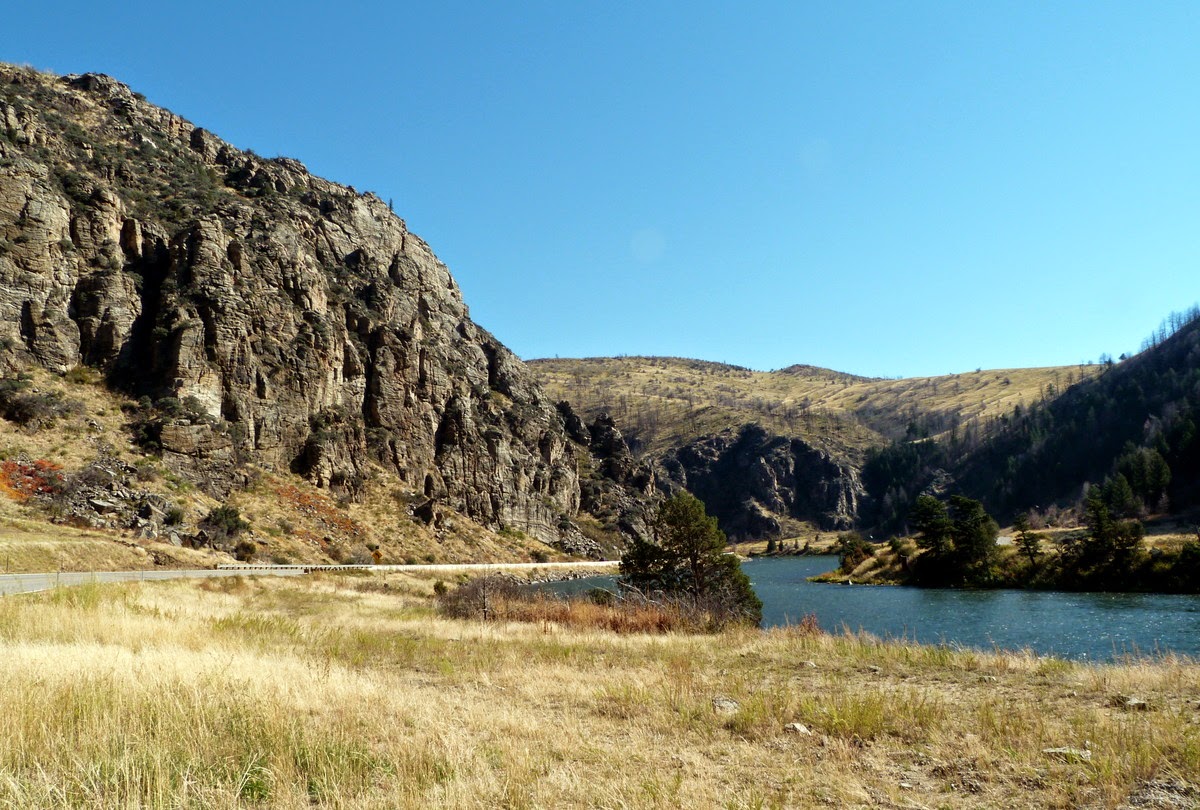 We all regrouped for a brief moment at the petrol gas station in Norris for coffee and snacks.  Having felt for a while that my saddle was a bit low, I stopped to raise it by a centimetre or so. Everyone else set off and left me! Harumph!  The road was straight and rose gently for a while, then kicked up into a really big climb, with signs advising the fitting of snow chains (which I ignored).  After eventually arriving at the top, there followed an equally long descent to the floor of the Madison Valley. 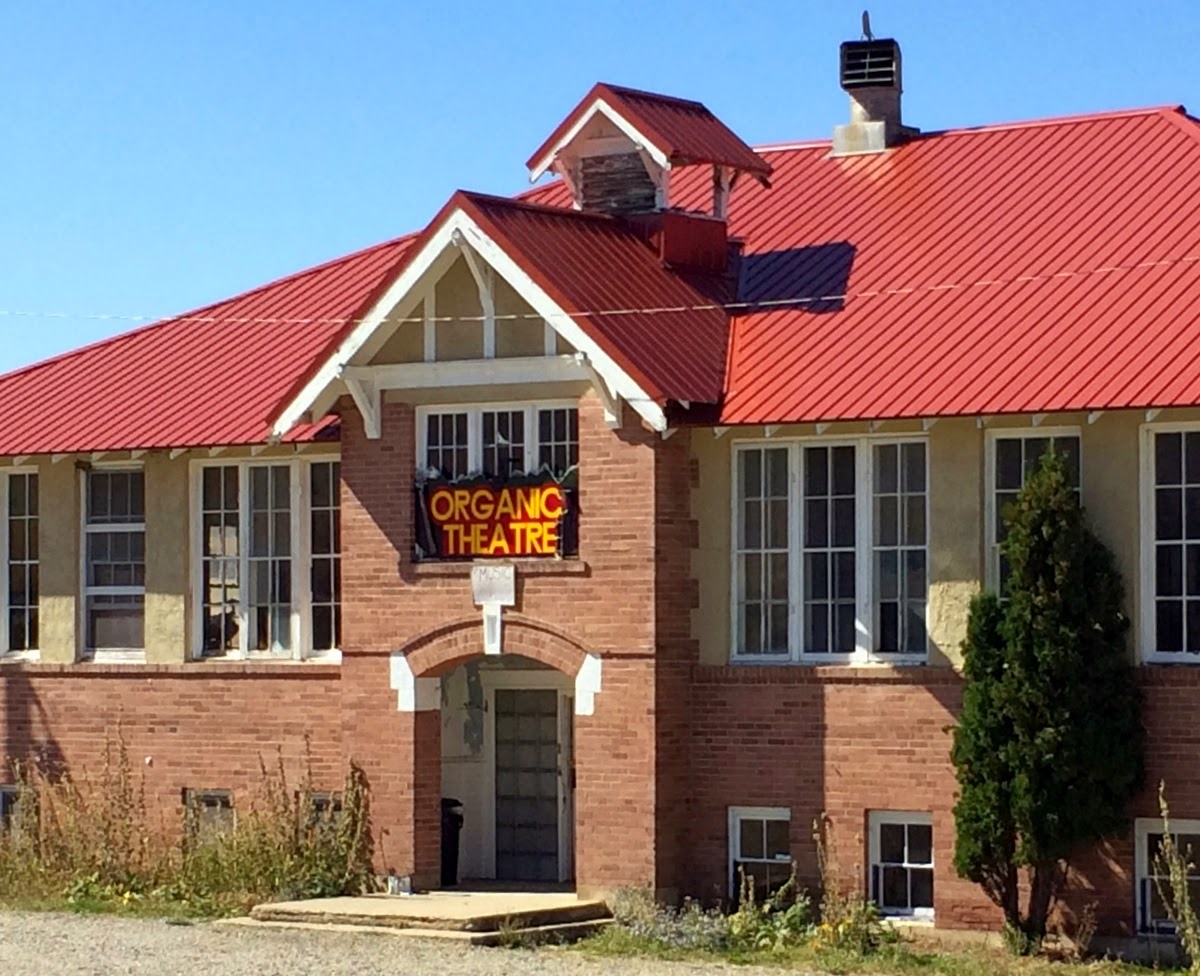 What on Earth is an 'Organic Theatre'? 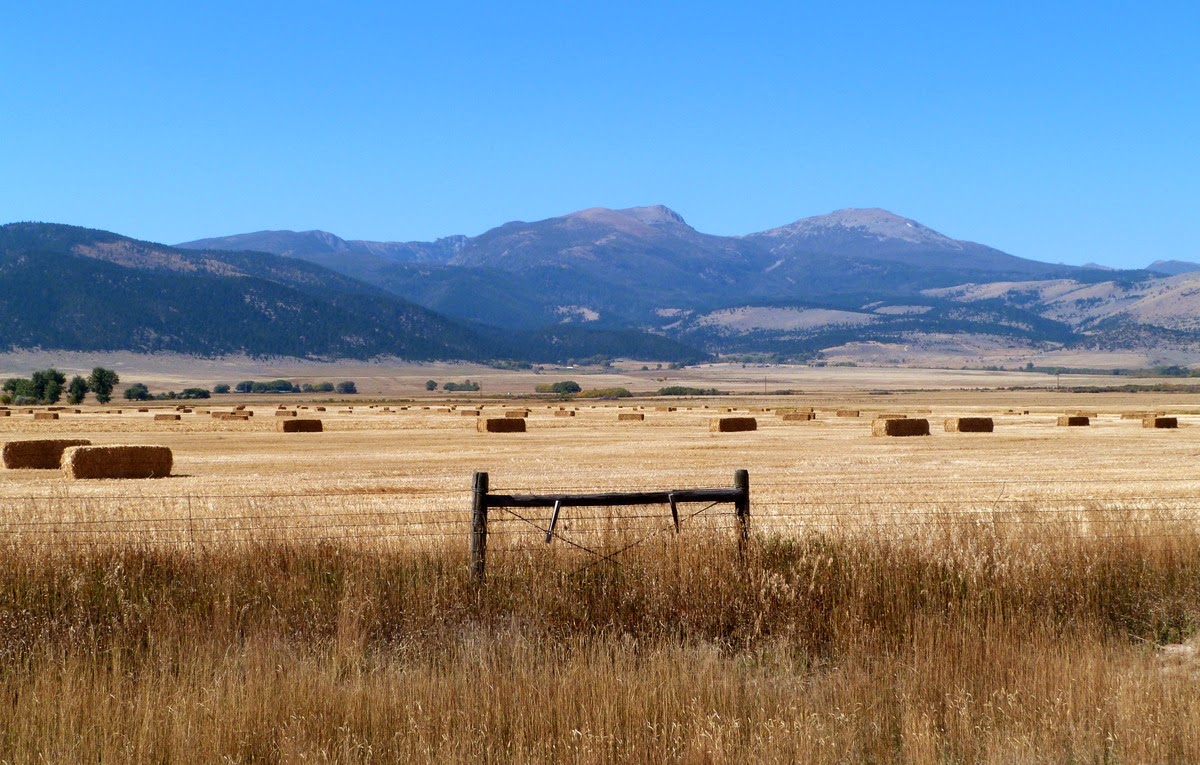 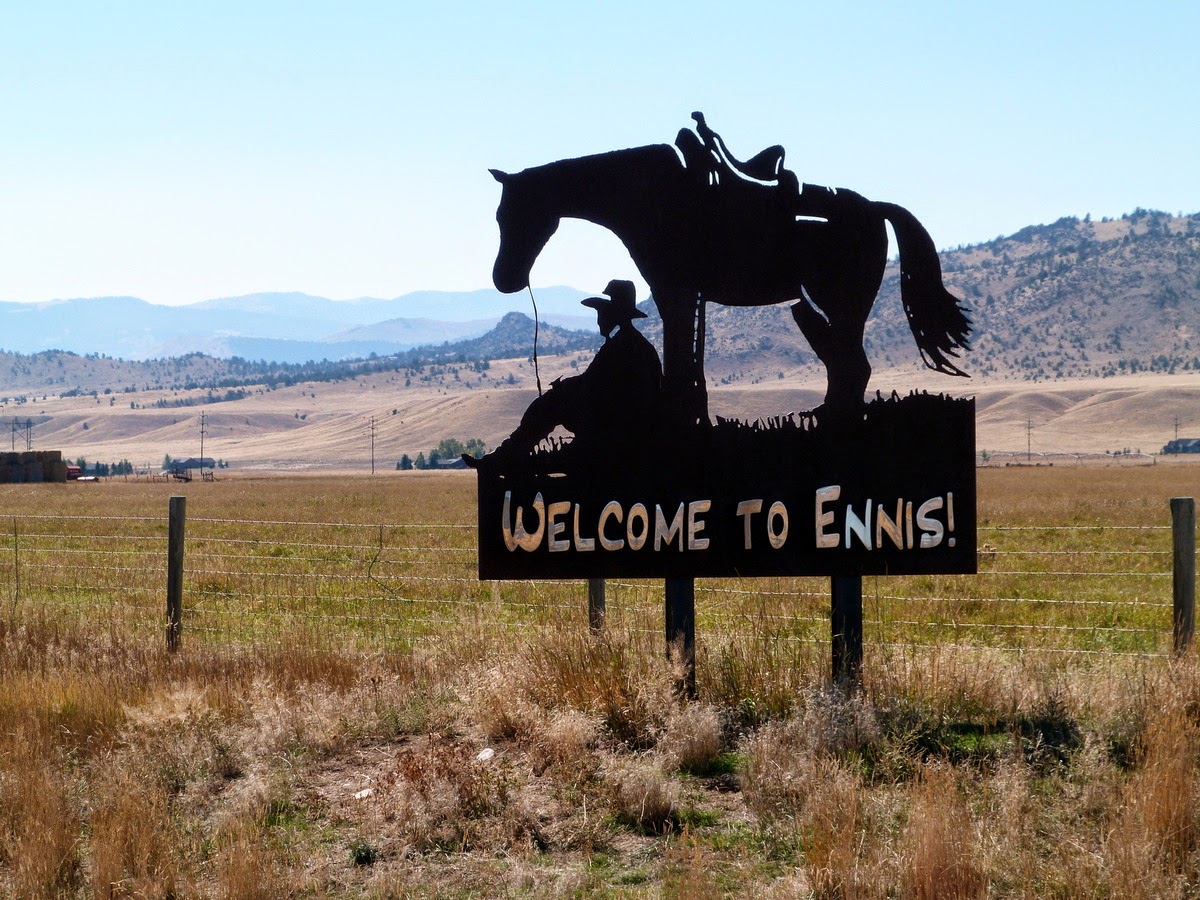 Two great signs on the outskirts of Ennis 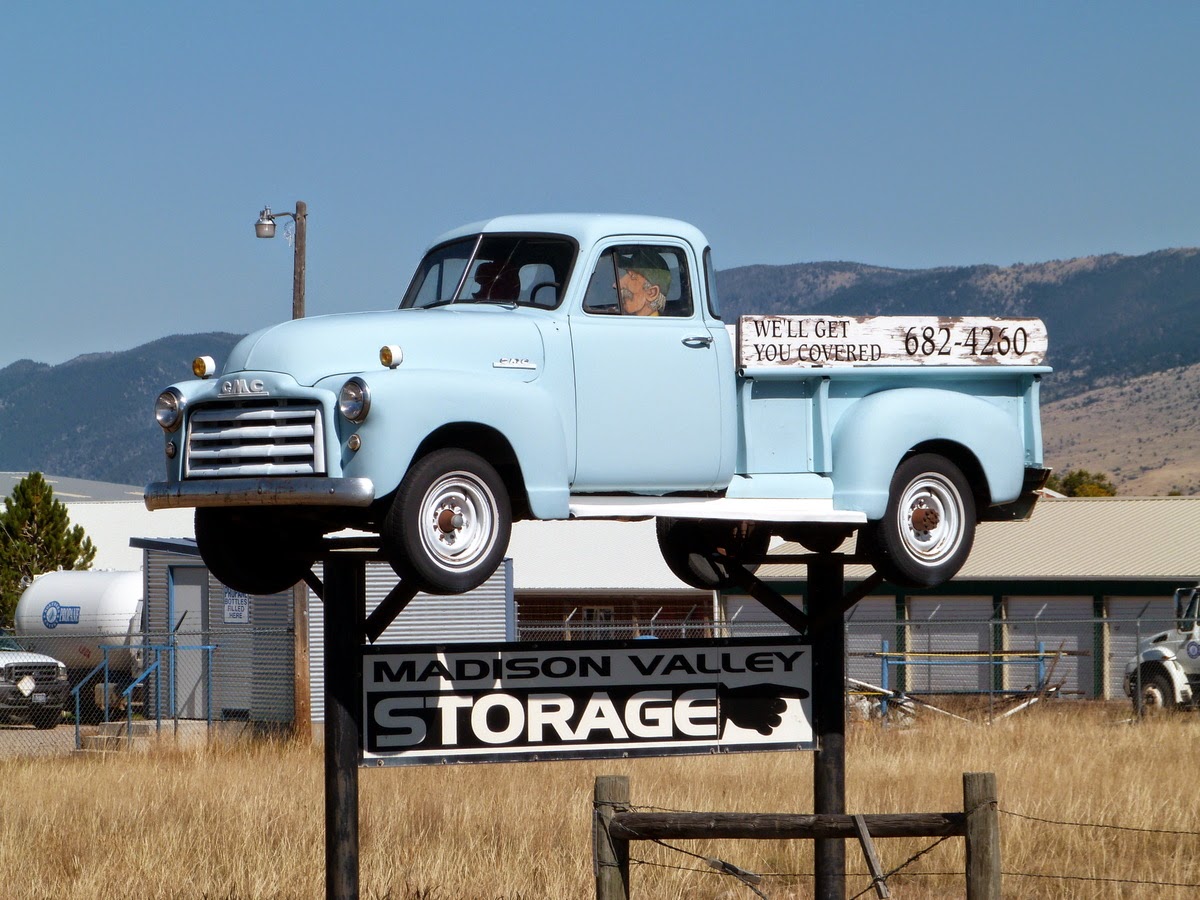 So after a fairly easy ride, I arrived at the Motel on the outskirts of Ennis a few minutes after 2.00 pm.  Unusually, compared to all our other overnight stops, the owner seemed a bit, should I say, grumpy.  He told me that the others had arrived ten minutes ago, too early to check in, so they’d gone into the town to find a cafe.  They weren’t difficult to find, Ennis being another very small town.  Also in town on the same day as us were a Japanese cyclist – carrying more luggage than I’ve ever seen on one bike – who was taking two or three years to ride from Canada to Argentina, and an Englishman called Luke who was cycling coast-to-coast from New York to Seattle.  Some coincidence!  They found a space to camp behind Willie’s Whiskey Distillery, where there was a mini music festival going on. 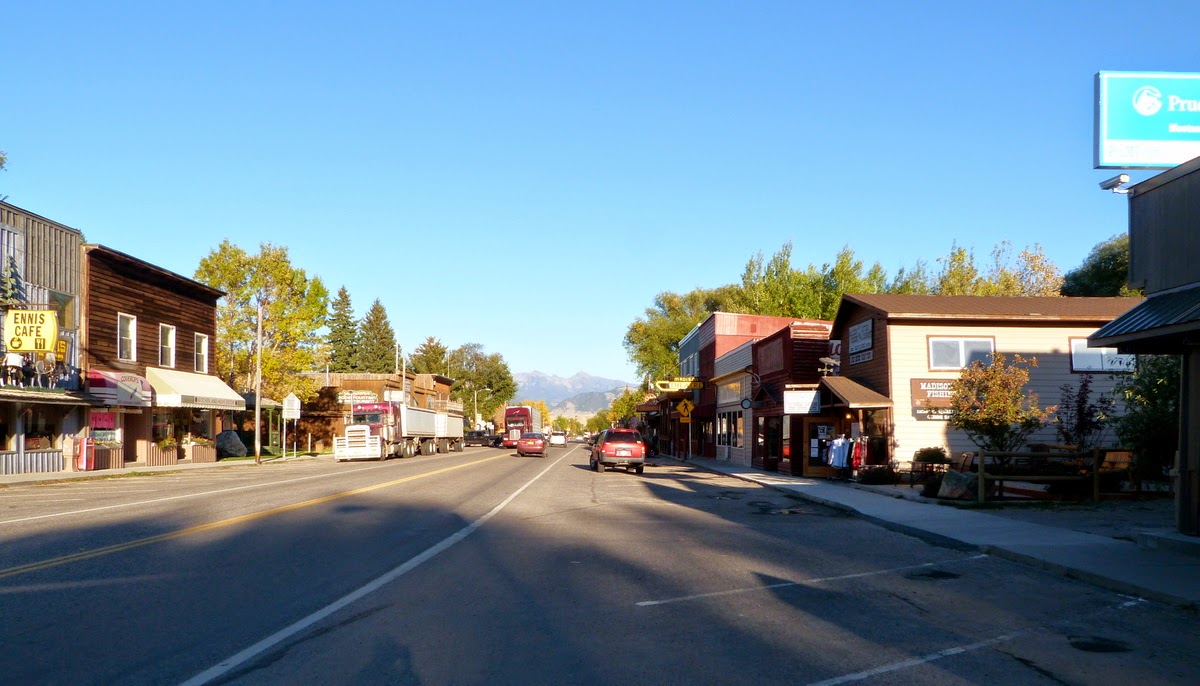 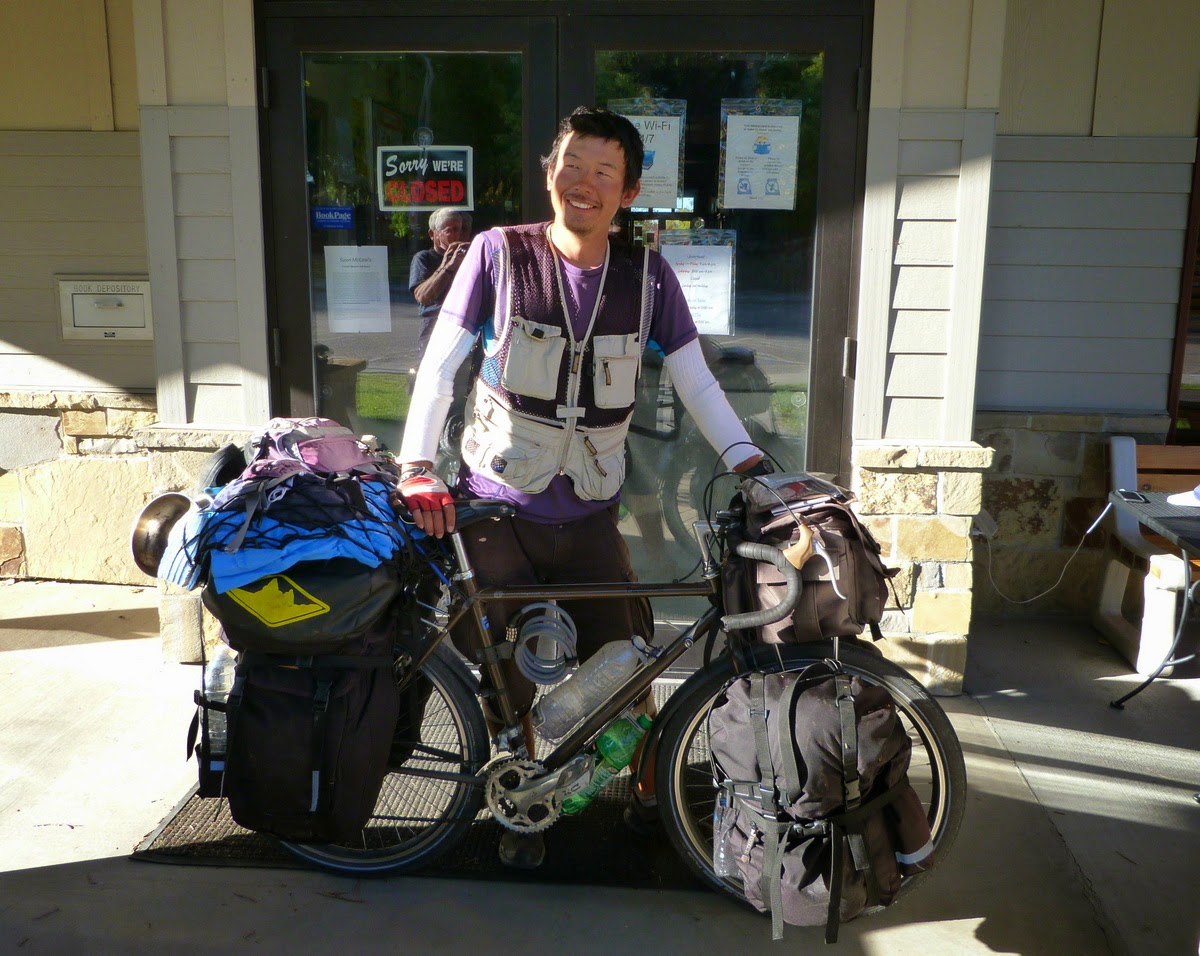 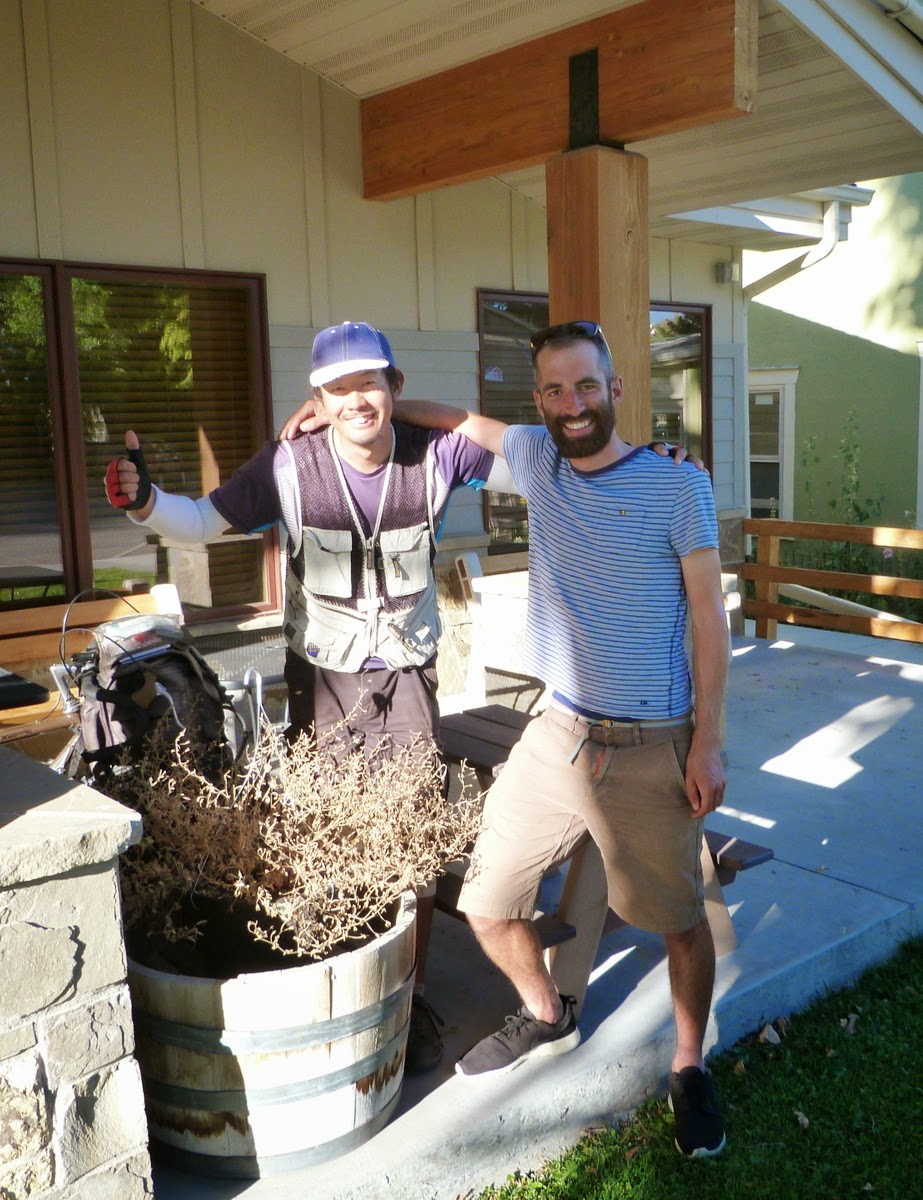 Seeking somewhere a little quieter, we had our evening meal at the town Bowling Alley – you’d think it would be noisy, but next to the alley itself was the most genteel of restaurants with wood panelling, soft lighting, and generally an excellent restaurant atmosphere.  As we walked back to the motel the stars were absolutely amazing – in a clear sky with no light pollution the Milky Way was crystal clear.

Tomorrow we had another longish day planned, heading for West Yellowstone past Earthquake Lake and Hebgen Lake.  I’ll tell you about the 1959 earthquake that created the lake in the next instalment.