No sooner had the alarm gone off than I heard the coach.  Good job everything was ready to go.  Bikes and all other bags in the coach and off we went, along with a surprising amount of traffic, all headed to the airport a few miles north of town.  Bike bags are the most ungainly things and very difficult to manoeuvre,  and mine was especially so in view of the amount of luggage I’d stashed away in it!

The automated check-in wasn’t really up to checking us in with all our gear, so eventually the one and only lady behind the desk came to ‘help’,  immediately declaring that all bikes were sporting goods so we would all be charged an extra $200.  Sighs all round.  When she got to mine she also informed me that it was overweight and would cost an extra $400!  So I set about emptying all the luggage that I’d squirreled into various corners and put it back into pannier no 2, until I got the weight back down below 50lb.

So, $200 lighter each, we all filed through security and grabbed a coffee and bun (no breakfast) before boarding the plane for Denver against the fine backdrop of dawn beginning to light up theTetons.  Well, not quite ‘we all’ as Jeff and Kathryn were to catch separate planes for Sydney and San Diego respectively.  Goodbyes were said, with promises to keep in touch and share photos.  Tony and Deborah, on the other side of the aisle, announced that a vehicle had arrived with our bike bags, the luggage operator had scratched his head, shrugged, and gone away again without loading them, so for the rest of the day we worried as to whether our precious cargoes were in fact sharing their journey with us.  It’s only 500 miles to Denver so it was a short flight.  The lady sitting next to me had her head completely covered by a blanket for the full one-hour duration of the flight, which I thought was a pretty strange thing to do! 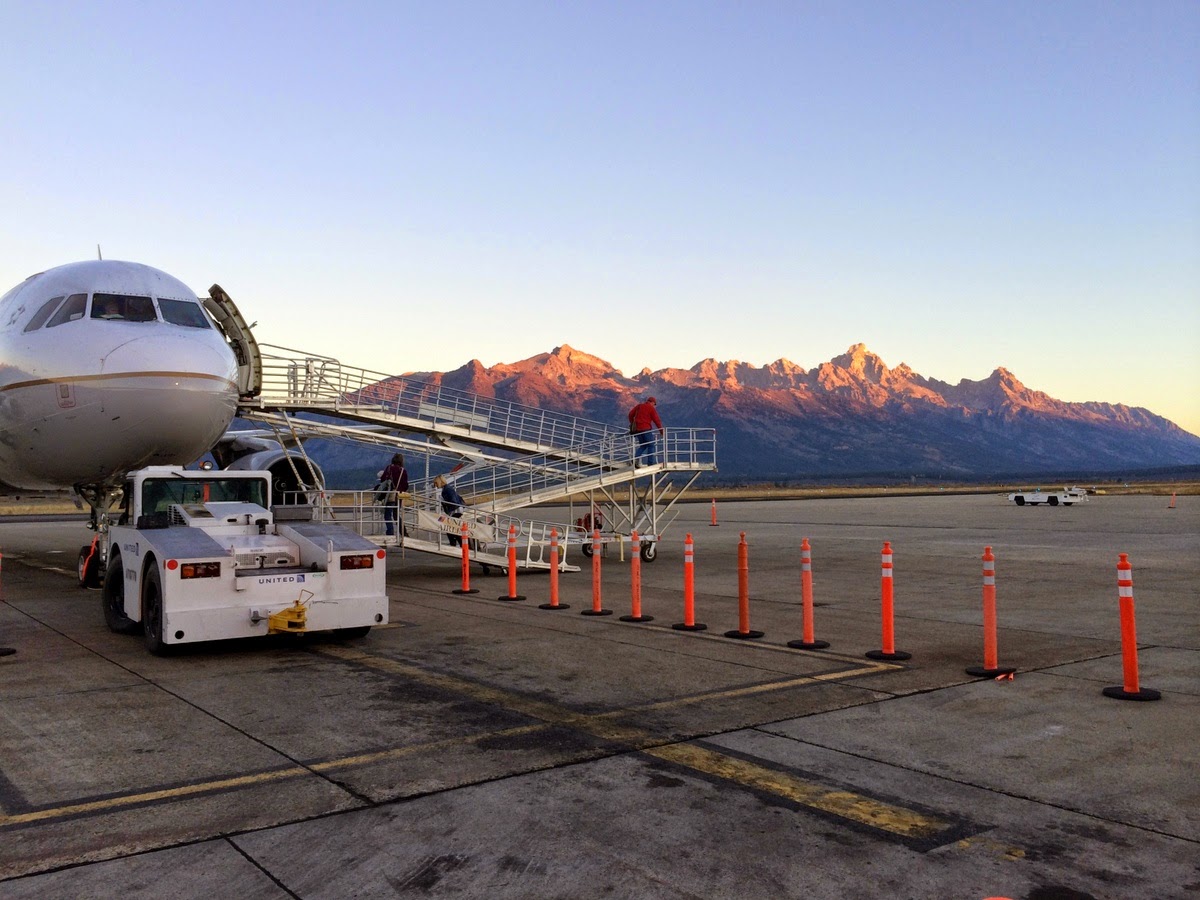 Goodbye to Jackson and the Tetons

At Denver we all managed to grab a little breakfast before the next, rather longer flight to Washington Dulles airport, flying over miles and miles and miles of flat country divided into endless rectangular fields.  We had a longer wait at Washington (and time for something else to eat).  All our flights were with United Airlines – friendly enough but very basic.  First class is at the front, where the privileged passengers have leather seats, a bit more legroom, a curtain to separate them from the οί πολλοί and a separate toilet.  Hardly worth the bother, if you ask me. 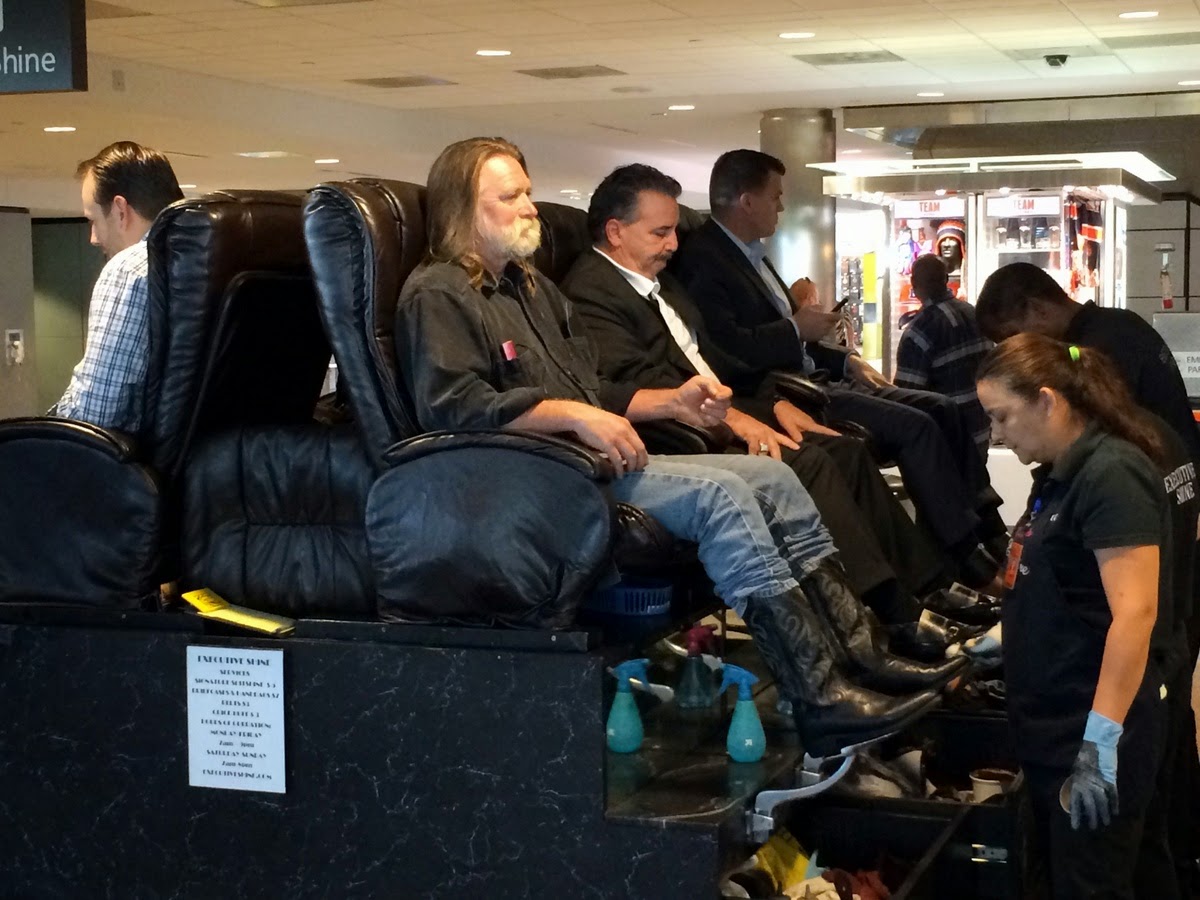 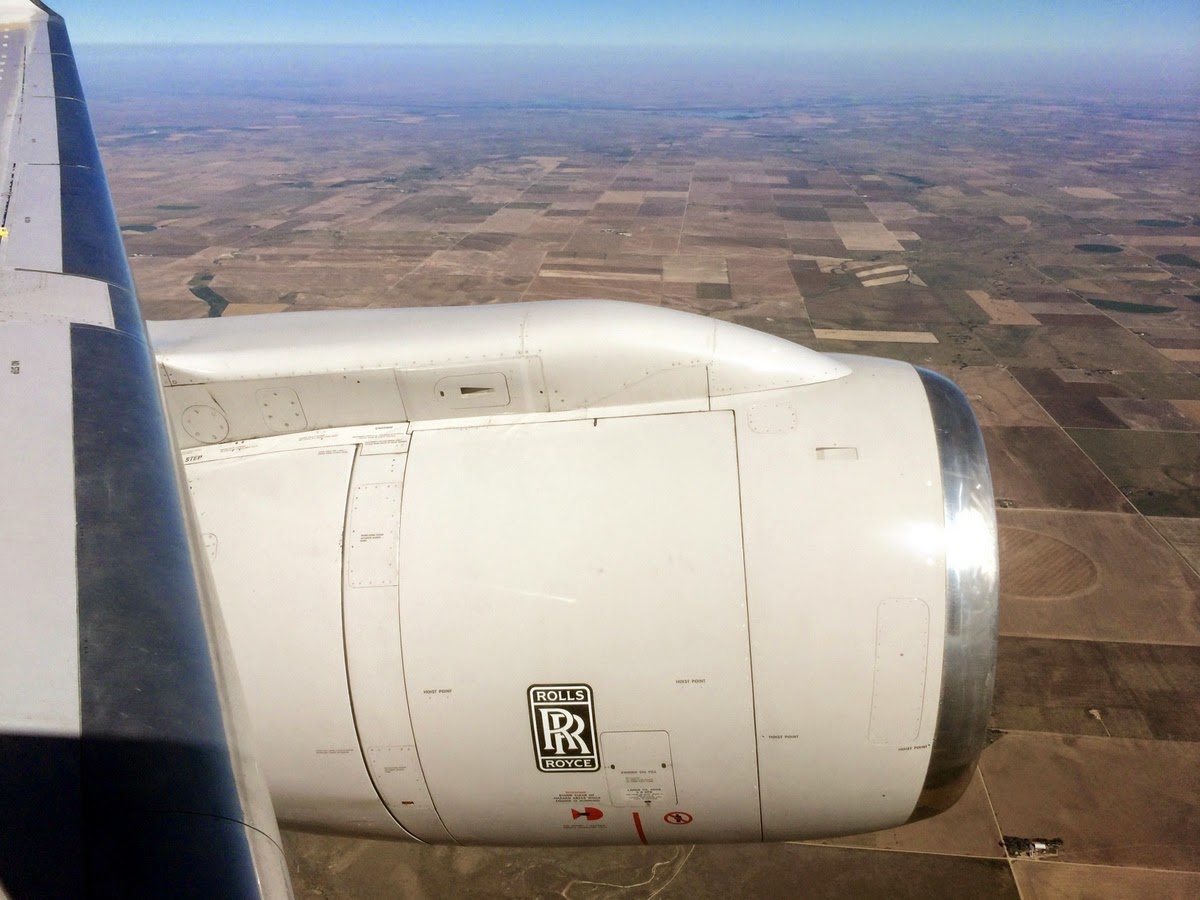 Miles and miles of prairie fields

As we set off for Manchester at 6 pm, we were looking forward to a 7-hour flight with the clock going forward 5 hours – so ETA at Manchester 6 am on the day after we set off.  It’s a long flight, but of course (so I’m told) nothing like as long as flying to Australia.  Being an overnight flight it was interesting seeing just how many people were fast asleep. 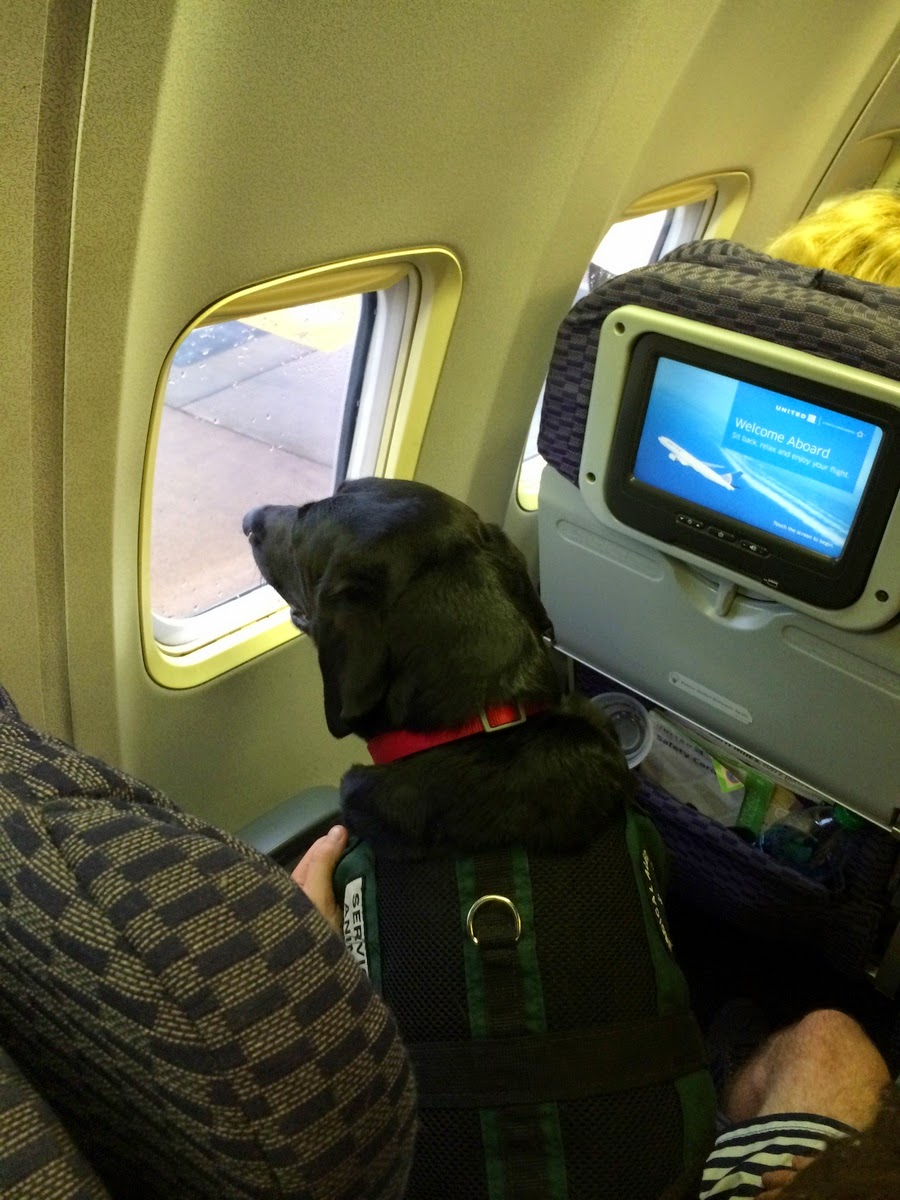 Interesting passenger on the seat in front of me!
Manchester arrived at last.  We had plenty of time as we waited for the luggage carousel – and worried as to whether our bikes would even appear – so goodbyes were said, and then to our relief and a little surprise, the bikes appeared, none the worse for their journey.  And so, after an hour’s taxi ride, I was back home.  Only one hour to go before my appointment with the dentist to repair that filling!!

Well I hope you’ve enjoyed this account of our epic Yellowstone Tour.  The Yellowstone National Park, Grand Tetons National Park, the John D Rockefeller Parkway, and the nearby areas of Wyoming and Montana are simply a spectacular part of the world, with their amazing geology, history, wildlife, and – last but not least – people.  If you get the chance to go, take it with both hands – you won’t regret it!
Posted by Bill Honeywell at 20:17