Breakfast was slow in coming at the Bistro on Cooke City’s main street (only street!), and when it arrived there wasn’t much of it, which as you may have gathered by now is a bit unusual.  So we were a bit late setting off on this cold, clear morning.  It only took a few minutes to arrive at Yellowstone’s North-East Entrance.  We were about to buy new permits (our one-week tickets had now expired) but one the Park Rangers on the gate (the one with the maths PhD) decided we’d be better off getting a refund on our original $12 tickets and buying Year Passes for $50.  I couldn’t see the sense in that, until he explained that a Year Pass covers FOUR people.  So we all got out our original tickets and to save time I paid for the passes, promising to work out later how much everyone owed me, even though I don’t have a maths PhD. 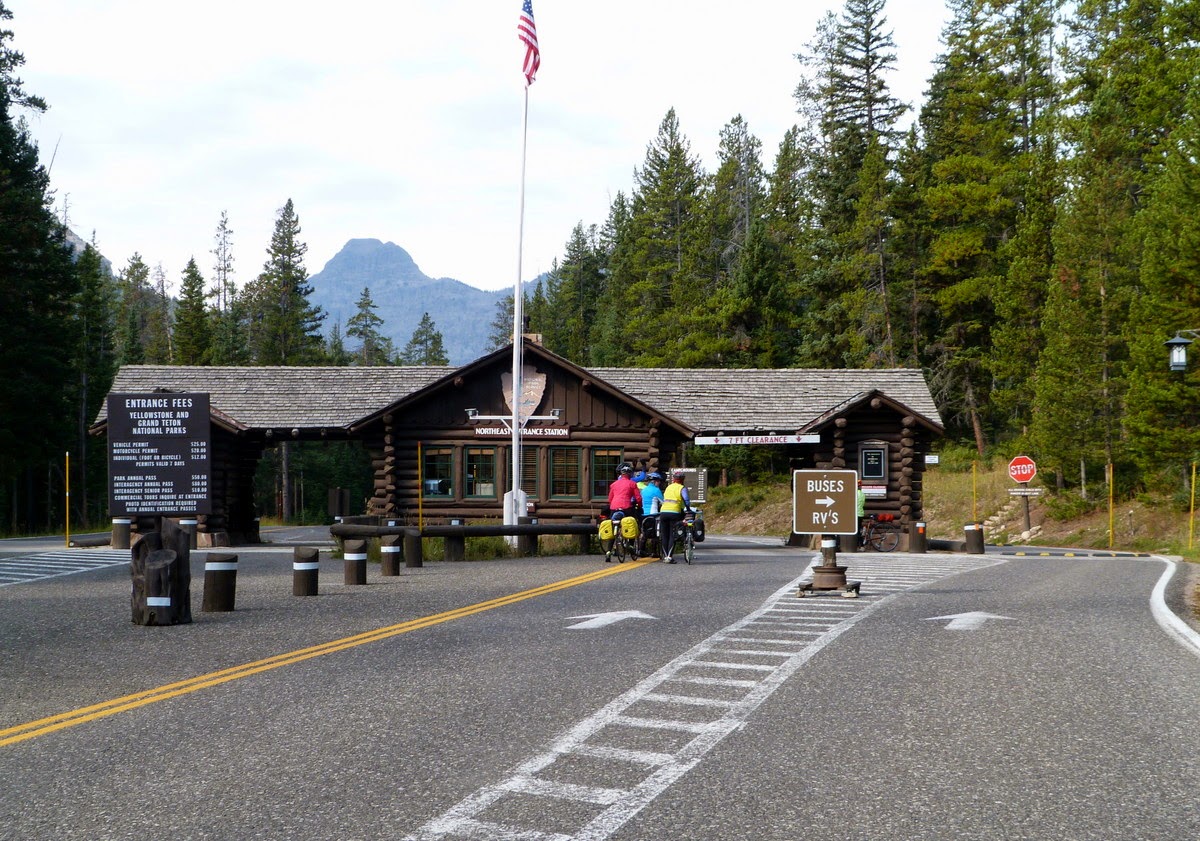 The North-East Entrance to Yellowstone National Park, near Cooke City

So once again we were back in Yellowstone National Park, heading towards the most spectacular area for wildlife, the Lamar Valley.  On the way we stopped where a couple of men with spotting scopes were staring intently at the hillside, and were treated to a distant view of wild white goats.  I’ve been told since that they aren’t a native species, but were introduced around 1940 to the Absaroka mountains in nearby Montana and have spread from there. 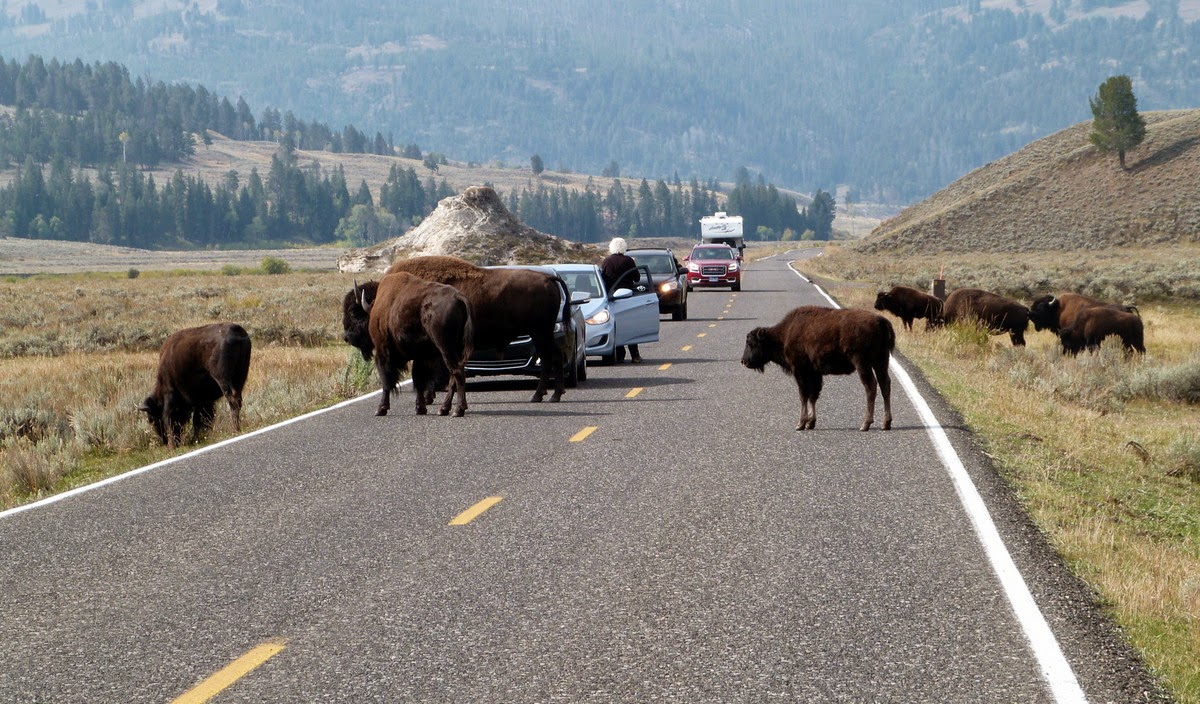 Uniquely Yellowstone Traffic Jam
As we approached the Lamar Valley near Soda Butte Creek, a herd of Bison were crossing the road, and along with several motorists we decided to play it safe and wait for them.  Tony and Deborah stopped at nearby Soda Butte and found another Bison just behind the cap of the thermal vent.  Once we reached the Lamar River there were fishermen everywhere, and on the river plains there were herds of Bison with some Pronghorn Antelope... but no signs of Elk, Moose, Bear or Wolves.  The plains by the river have a Serengeti-like character:  even the sounds of the Bison are a bit like those of Wildebeest. 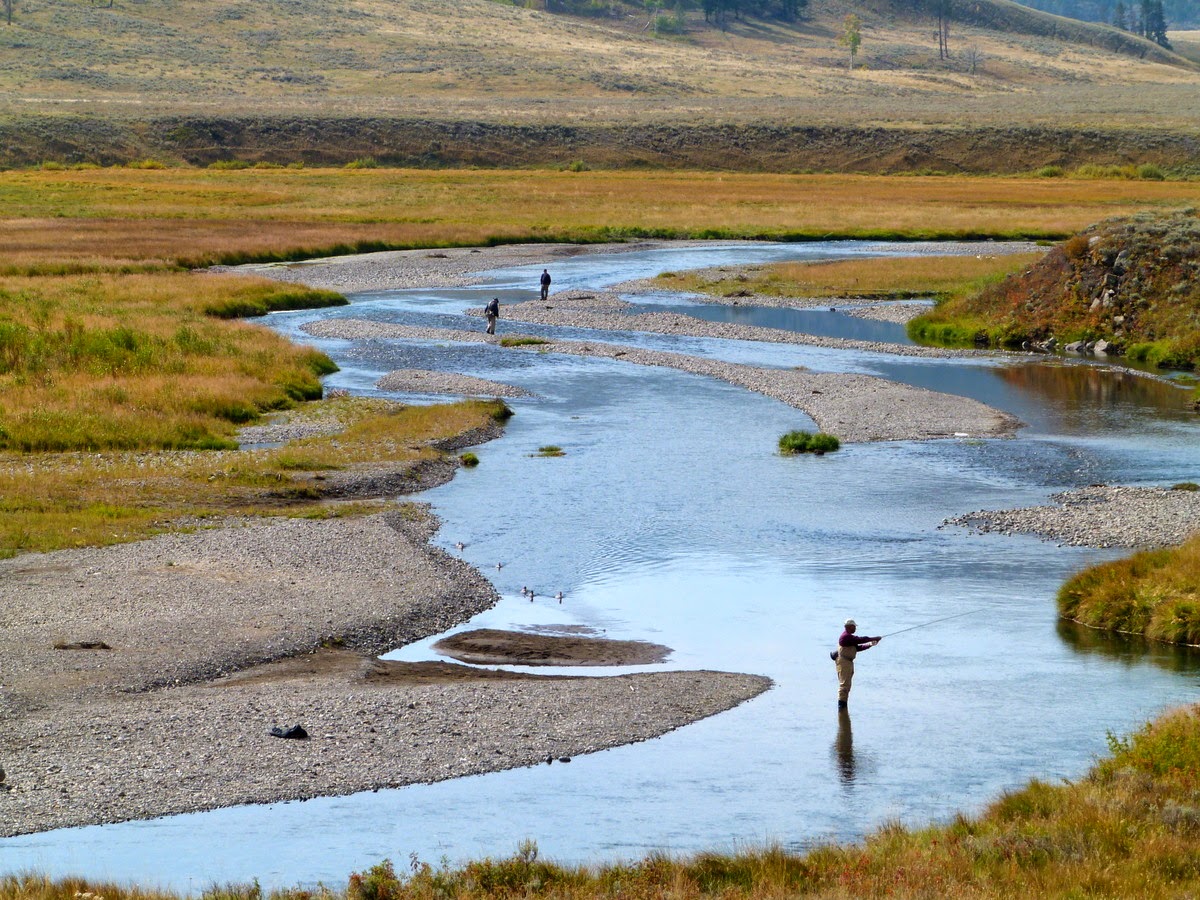 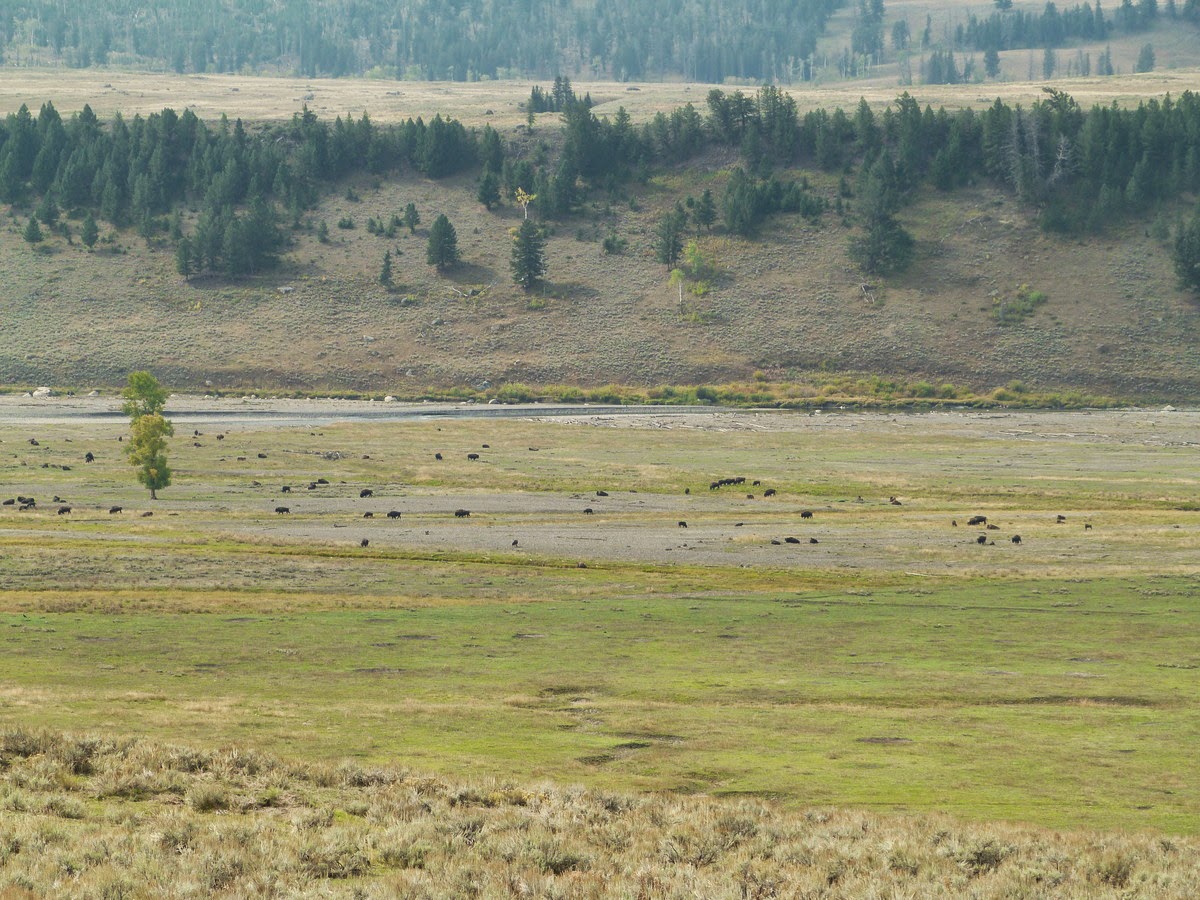 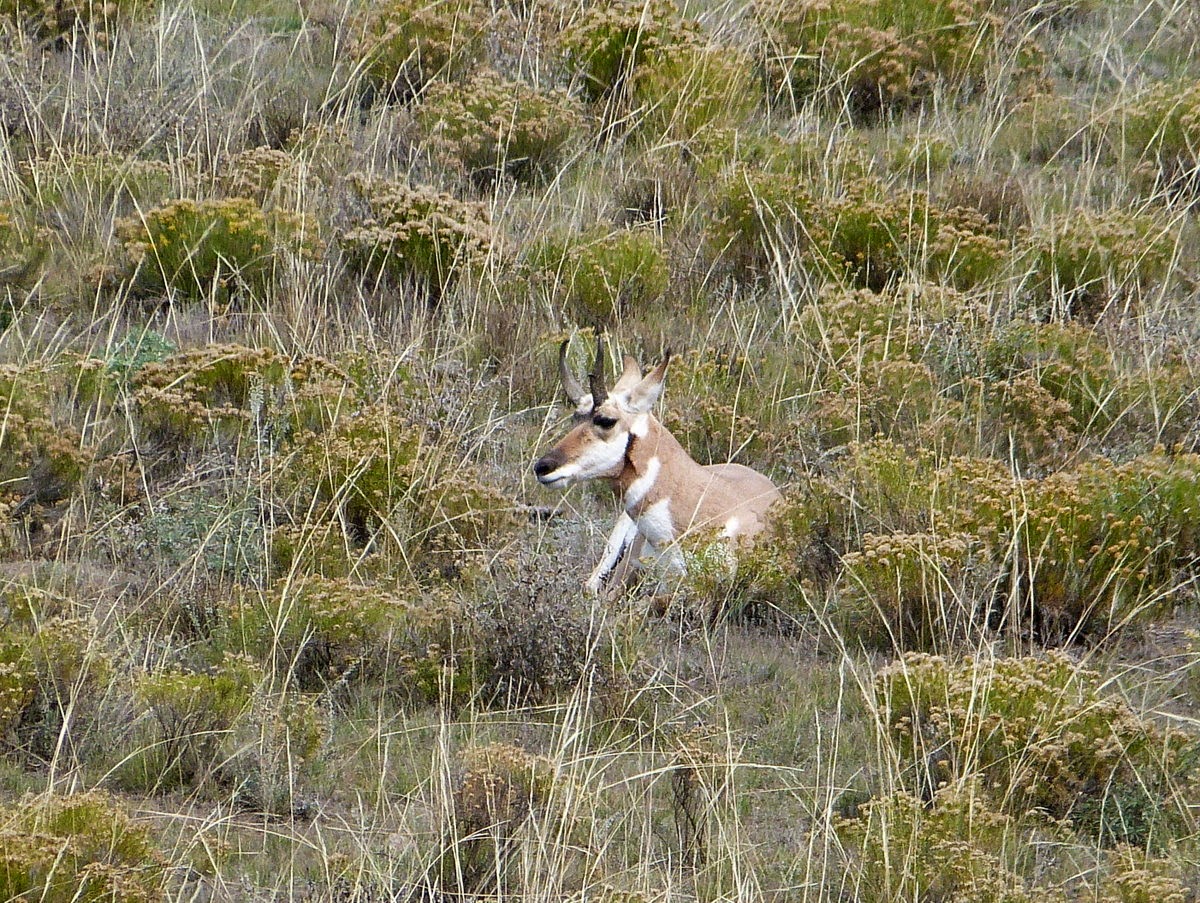 Pronghorn Antelope watching the world (and a few cyclists) go by
Eventually (after another interminable wait at a Restroom!) we reached Tower Junction, boasting not much more than a filling station, but at least one with plenty of food and drink, which was gratefully received.  Well, except for my drink – Jeff had bought a pint of coffee-flavoured cold milk which looked delicious, so I followed suit.  It tasted of cold weak milky coffee (well I suppose it would, wouldn’t it?) so that was my first, and last!

The next section, from Tower to Mammoth, seemed strangely ordinary.  No great herds of Bison (one or two scattered beasts) and a few Hawks;  I detoured to see the Petrified Tree and was disappointed, finding the poor tree imprisoned within an enclosure of ugly metal railings.  But then, there’s not much a petrified tree can do, to be honest.  But for the most part this section is a fairly unexciting, undulating highway with too much traffic (some of which was the worst-behaved of the Tour) and narrow – or no – shoulders for the benefit of cyclists. 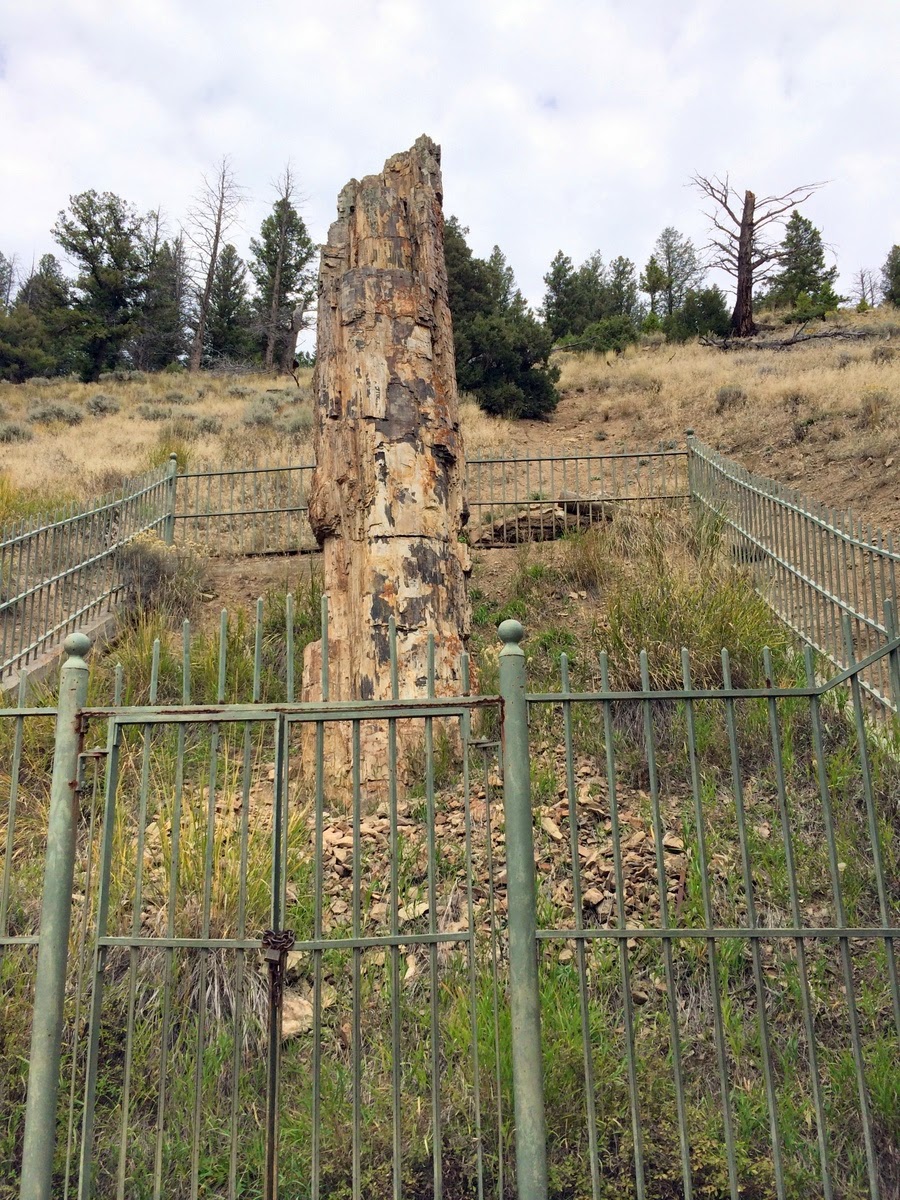 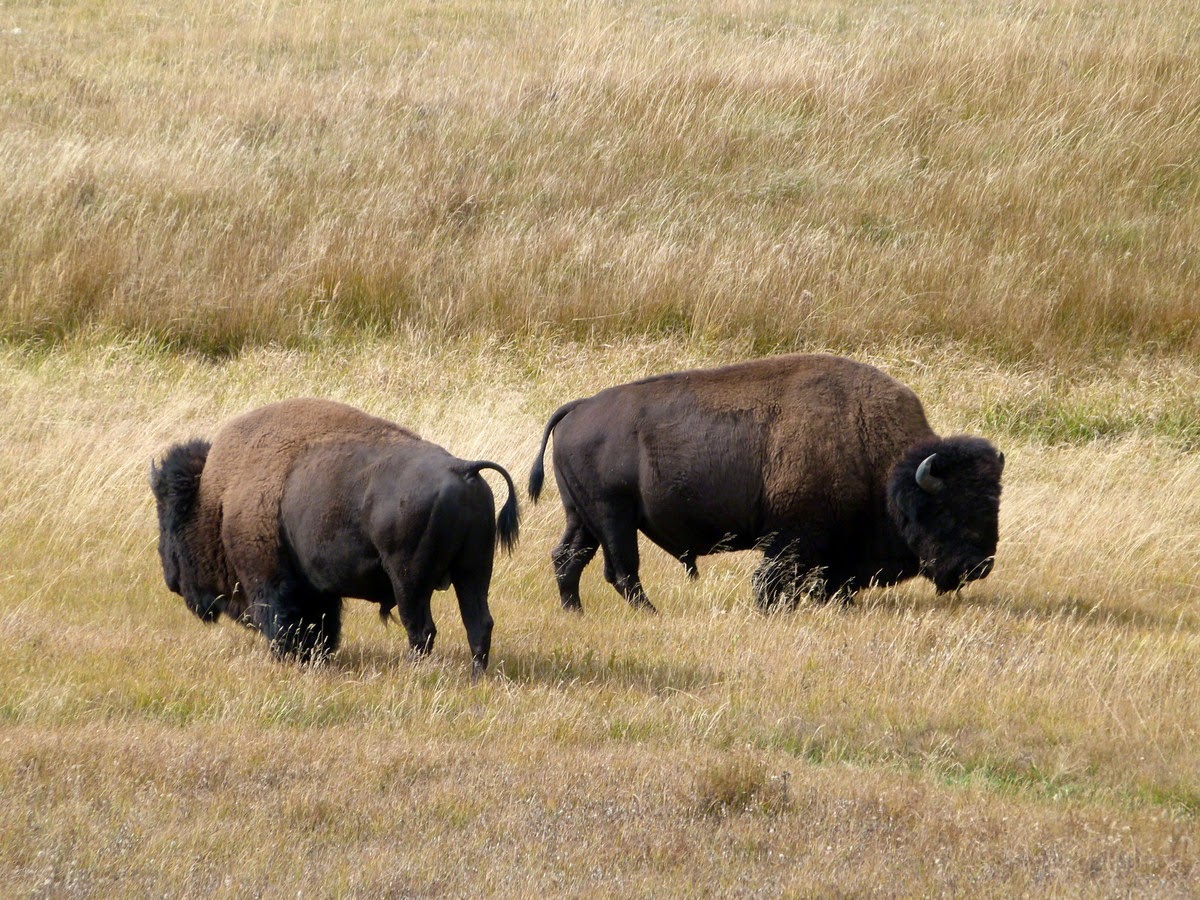 So it was a relief to arrive at Mammoth, after a long descent with a steep river valley on the right (I should have stopped for Udine Falls but whizzed by!), then crossing a ridiculously high bridge over the River Gardiner, and finally pedalling up the final hill to the town.  I followed the signs to the Travertine Terrace and hot water springs which were absolutely amazing, with hot water spilling over the top and running down terraces of travertine and white limestone deposits.  The hot water dissolves the native limestone as it flows underground, then re-deposits it as travertine, in rather the same way that stalagmites and stalactites are formed in caves, only much hotter and quicker! 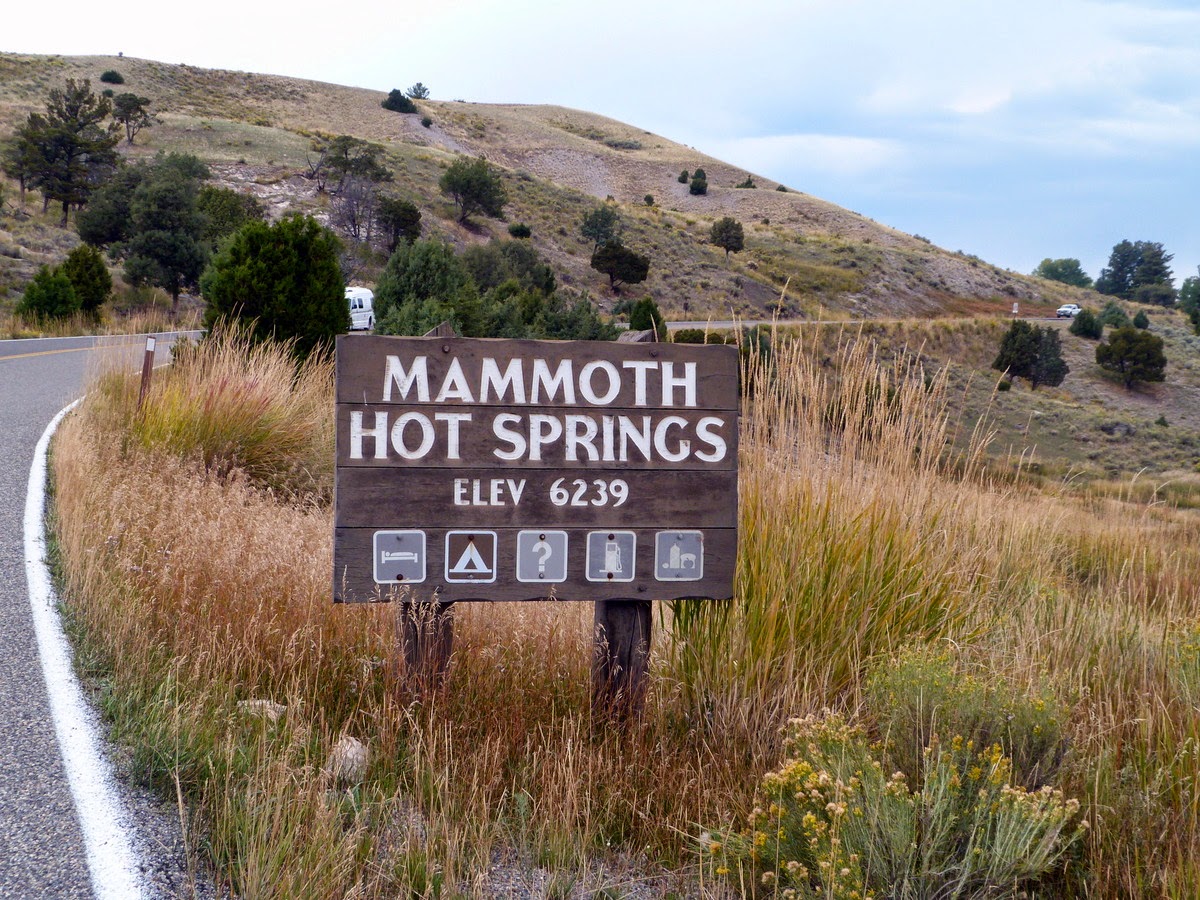 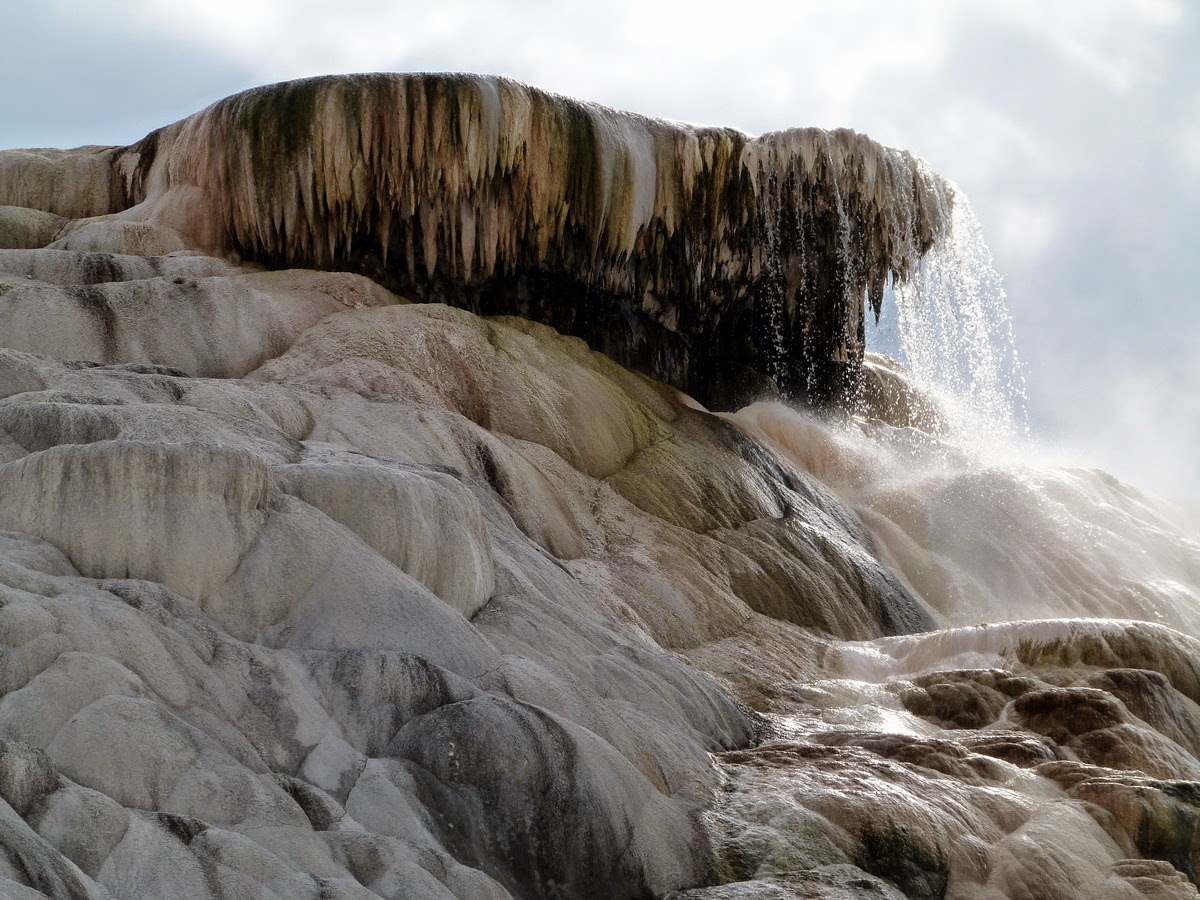 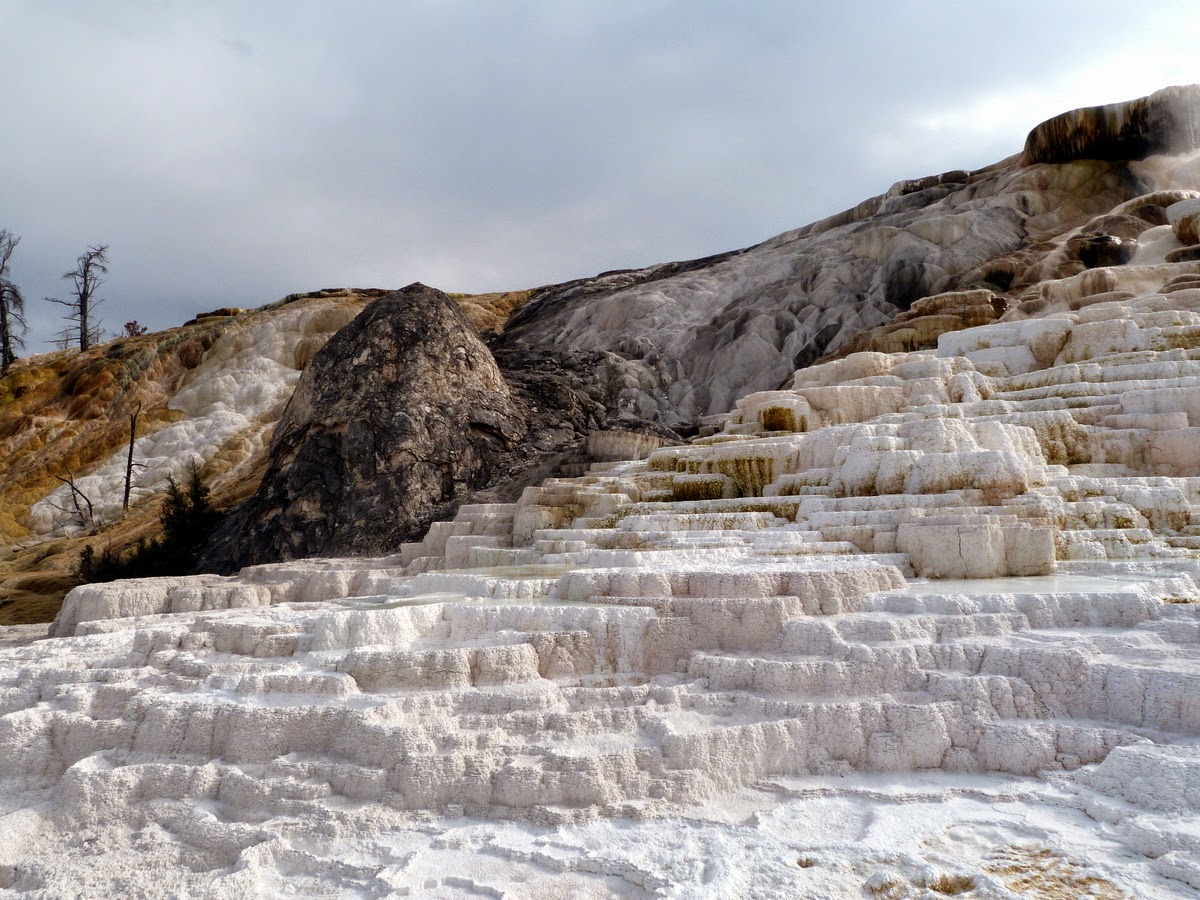 In Mammoth town centre a large herd of Elks had taken up residence on the grass square in front of the town hall and was causing a bit of traffic congestion as everyone stopped to look and take photos.  A steep descent north out of town took me to the Yellowstone River, where  a group of people with huge camera lenses had just seen a fine bull Elk, and were waiting for it to reappear (obviously it had heard that I was coming so went into hiding). 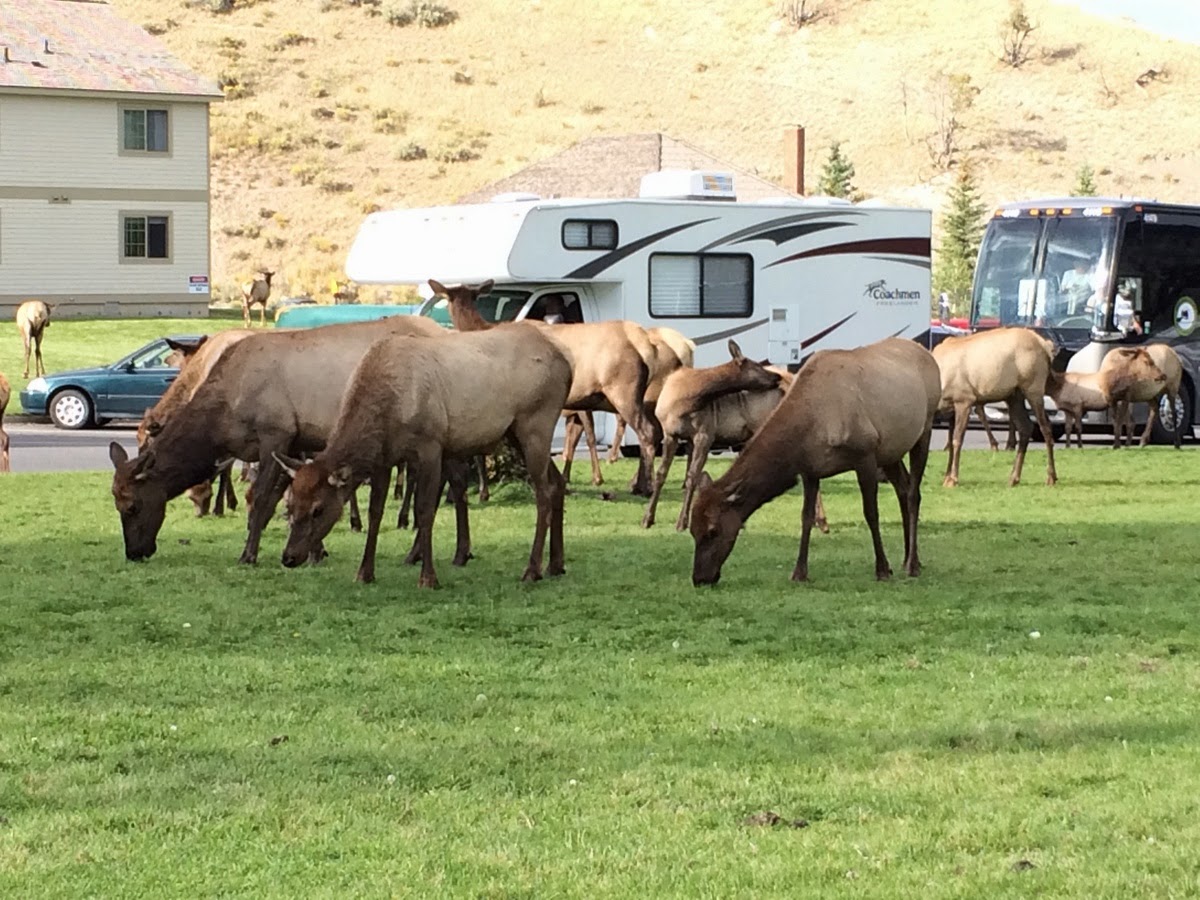 Unusual sight for a village green

A little further on, in stark rocky surroundings that were almost quarry-like, another small people were gathered, watching some native Bighorn Sheep.  They (the sheep) put on a good show, running down the steep, loose, rocky hillside without losing their grip, stopping and starting, youngsters suckling. 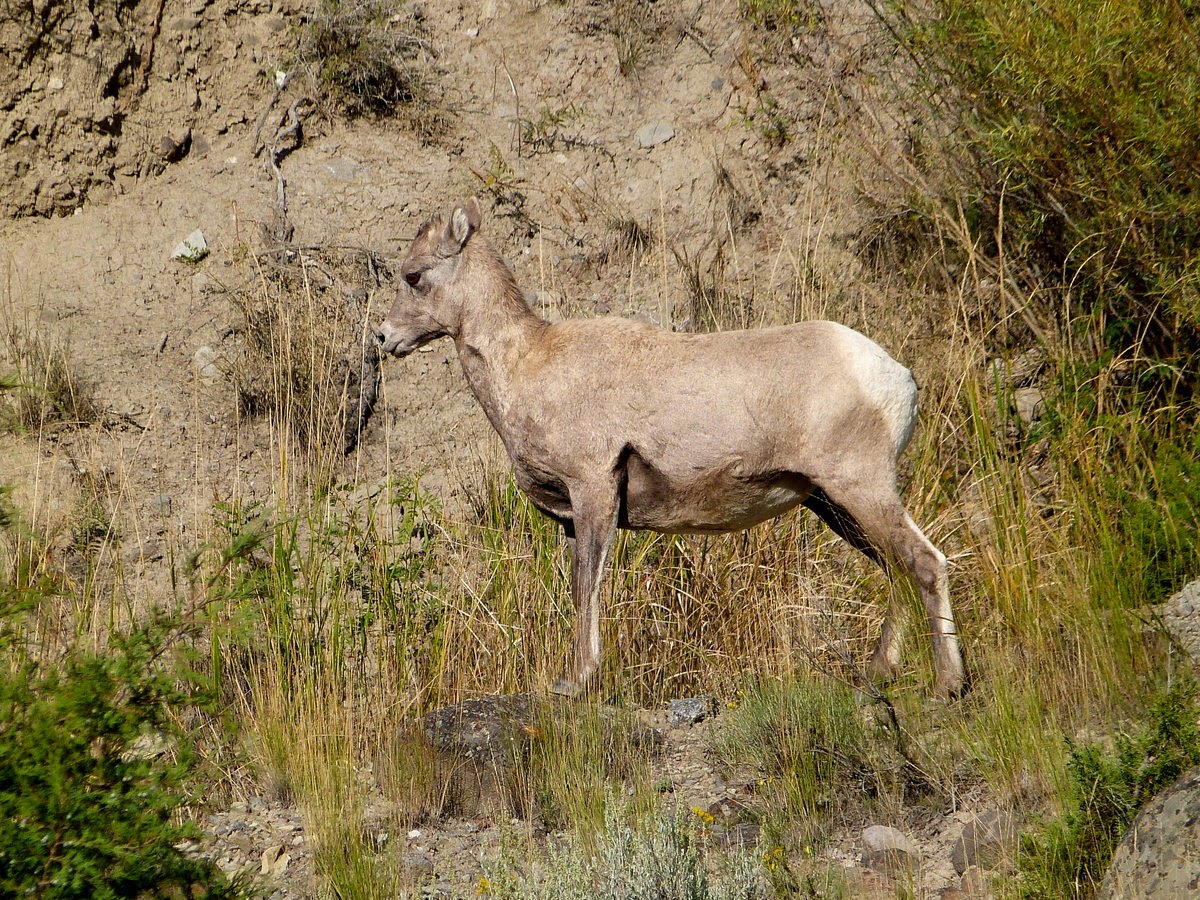 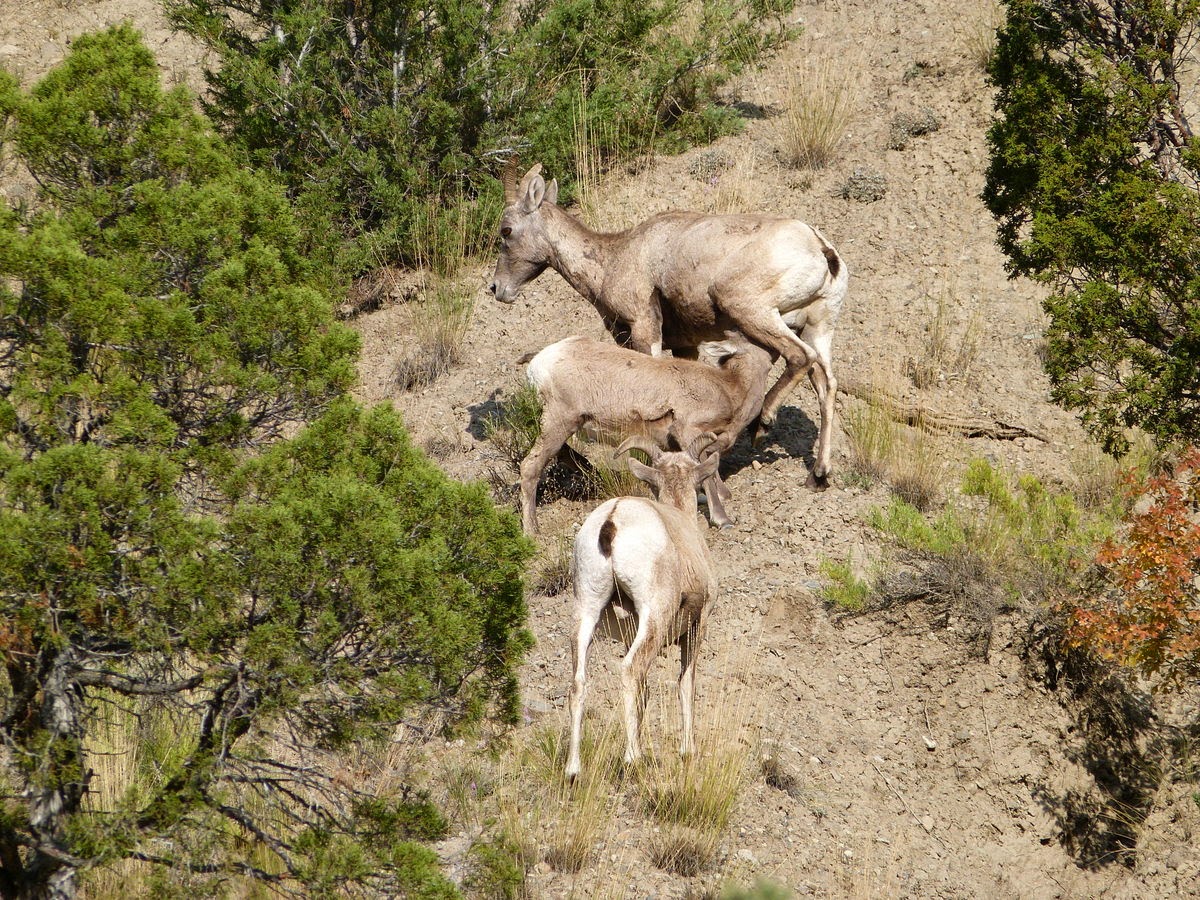 And then, after passing out of the Park again through the North Entrance (and the iconic Roosevelt Arch) I arrived at Gardiner, where another Elk was minding its own business grazing in a field next to a car park.  Our lodgings for tonight were at the Yellowstone River Motel – Richard and I had the luxury of separate bedrooms and a rear ‘garden’ overlooking the river.  Service at the Mexican Restaurant wasn’t the best we’d had so far – our server first asked what we would like to drink, and when Richard asked him what kind of red wine was on offer he went to find out (or so we thought) and didn’t reappear for about twenty minutes!  Just why we told them we would return for breakfast in the morning, I’m not sure. 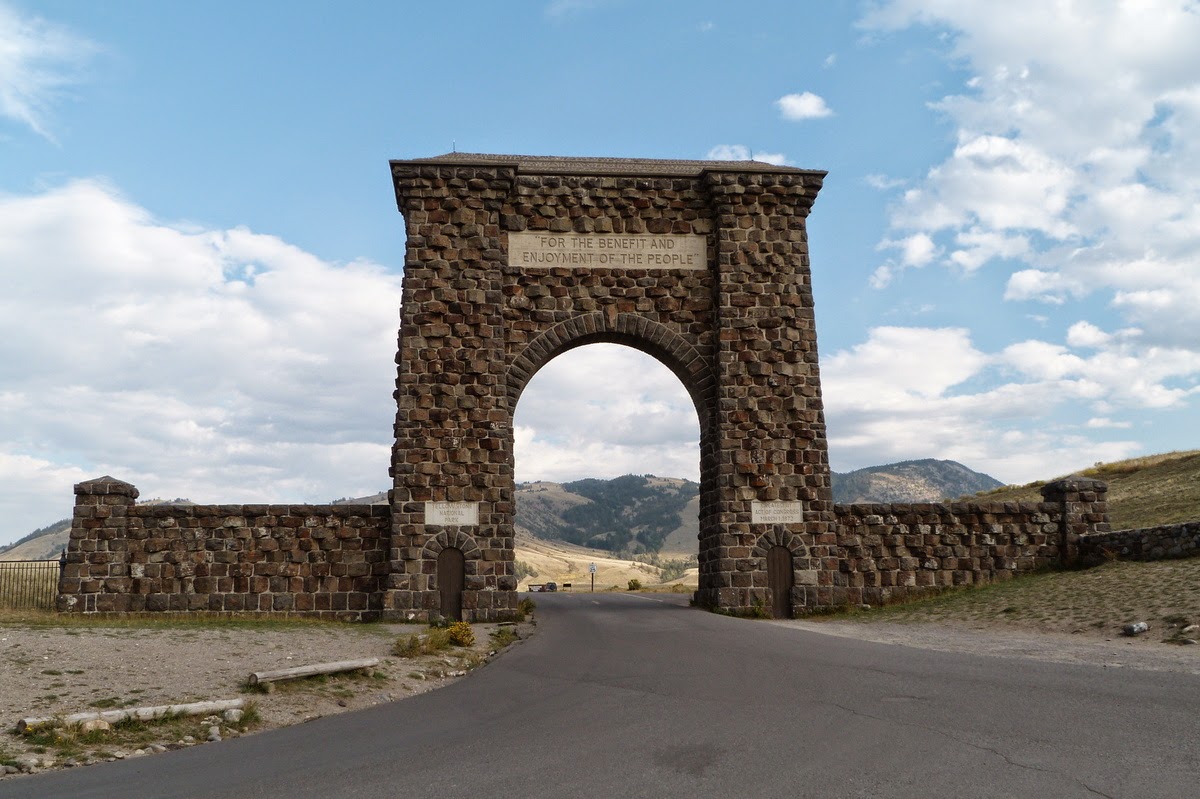 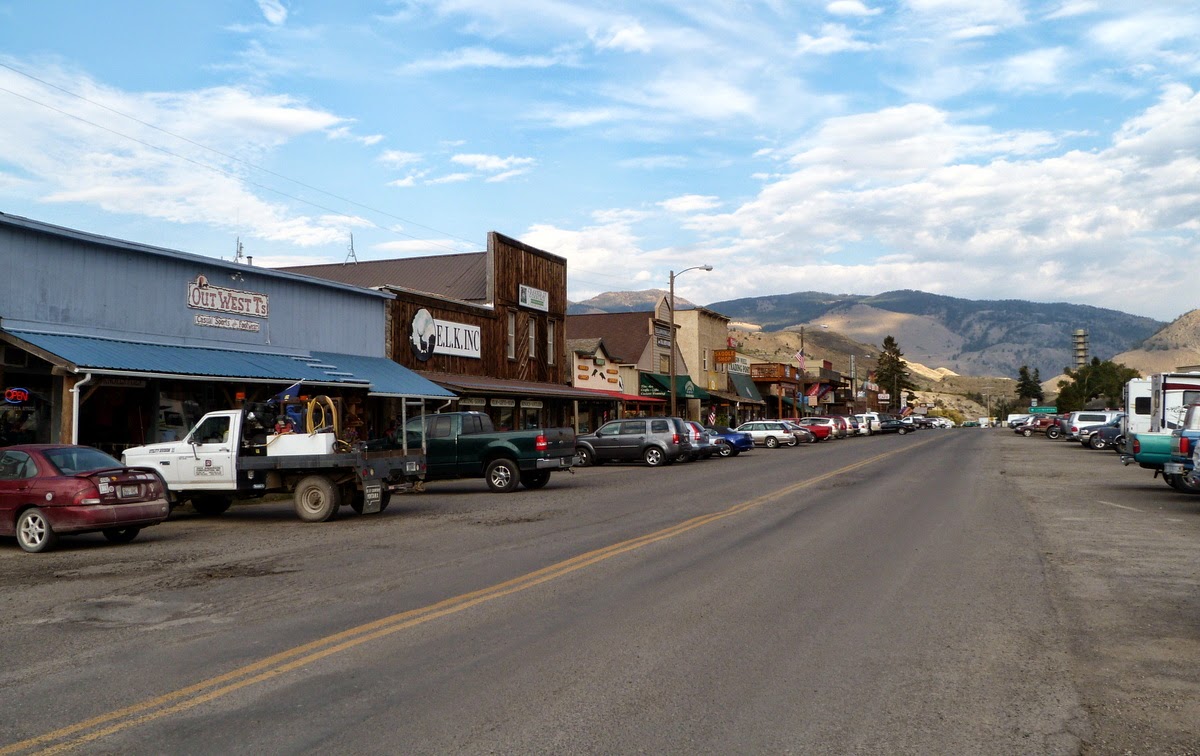