26 miles – total 1,352 miles
Most cyclists arrive at John o’ Groats feeling somewhat elated, having completed around 1,000 miles during their journey from Land’s End. Despite having completed over 1,350 miles since setting off on 10 May, it’s a tad too early for elation to be amongst my emotions – there are still another 3,000 miles to go before completing the Coastal Challenge.  Still, there was certainly a feeling of satisfaction – one more landmark reached, in fact more than one, as today we visited the most northerly and the most north-easterly points in mainland Brtain – Dunnet Head and Duncansby Head respectively.
After three days in which I’ve covered 213 miles (and 16,000 ft of ascent) today’s plan was to have an easy short day and rest the legs for the afternoon.  Despite a nice weather forecast, the morning started wet and windy, but once on the road it wasn’t as bad as it seemed.  We left the Caravan Site without contravening any more regulations (as far as I’m aware) and were at Dunnet Head in under half an hour. 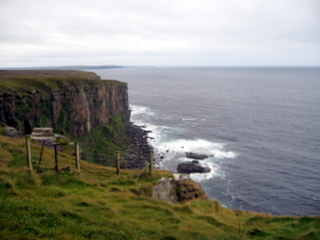 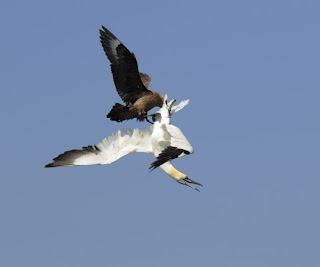 Bonxie gently persuading a Gannet to give up its food
The cliffs host lots of nesting Fulmars and Guillemots, but my favourites are the piratical Bonxies (Great Skuas) which terrorise other birds into giving up their food.  One or two were cruising around like B52s, looking for victims.  There were also quite a few orchids along the roadside, mainly Early Purple and Marsh Orchids, I think. 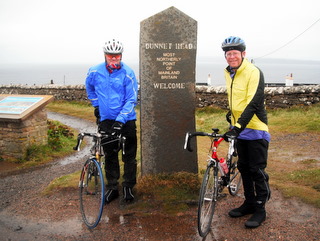 We took the back roads through Ham, past an amazingly large derelict cornmill (surprisingly, there’s a lot of arable land in this corner of Scotland), around Castle of Mey and then on to the main road for the run in to John o’ Groats.
Mark and Sandra arrived with the motorhome at the same time as us, so we booked in to the caravan site and had a brew before cycling out to Britain’s most north-easterly point, Duncansby Head, which also has a lighthouse, cliffs with Fulmars and Guillemots, Bonxies and a pair of impressive sea-stacks – and an Oystercatcher incubating three eggs on a piece of gravel hard-standing. 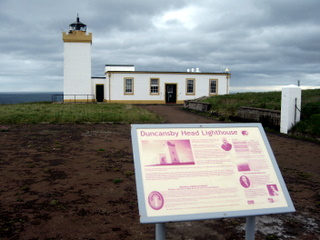 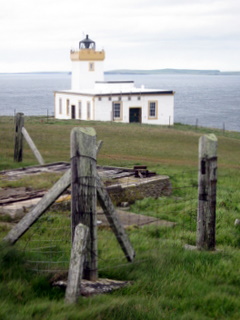 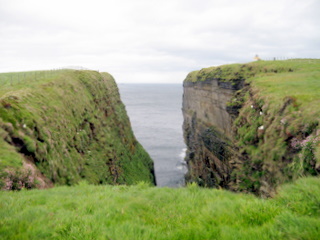 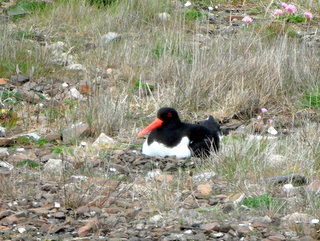 Back to the cluster of gift shops and cafés that is John o’ Groats.  The hotel at the Start/Finish is now closed, sadly, but the adjacent café has the record books of “End-to-Enders”.  I looked up my entry of 23 May 2003 and was amused to see that I had complained about the amount of rain. Not much change there then.  I wrote another entry for today without mentioning my opinion of the café’s attempt at paninis.
And now for the weather forecast.  The tiled floors in the toilet block here at the caravan site were mopped this morning, and were still wet this afternoon.  This is a sure sign (100% according to my father-in-law, and he used to be a farmer, so he should know) that the weather is about to be very good.  And he’s never wrong…
Finally (and I make no apologies for writing this reminder) my aim in doing this ridiculous bike ride is to raise £20,000 for Cancer Research UK.  Many readers have already donated (and we're almost up to £7,000) but probably even more are hedging their bets and waiting for me to give in!  If you haven’t made a donation yet, please do – it’s important work they’re doing, for goodness’ sake!  As always, the links are http://tinyurl.com/cancerbikeman and http://www.justgiving.com/Bill-Honeywell. And please be as generous as you can! Thank you!
Posted by Bill Honeywell at 17:29