75 miles, total 1,878 miles
Scotland to England!
Goodbye Scotland!  And I say that in the nicest possible way – I love Scotland, and on this ride I’ve seen many places there for the first time.  But (let me make clear that this refers to before I was married) like many a young lady whom I have taken a fancy to, I’m not sure the feeling has been reciprocated.  She certainly threw everything but the kitchen sink at me. And who needs kitchen sink when you’ve got twenty-ton oak trees to throw at motorhomes?
Haste ye back! But not on this trip! 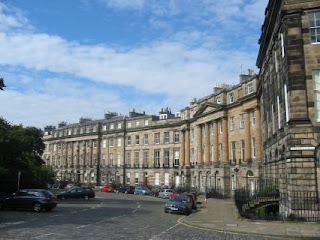 First stop this morning was in the financial centre of Edinburgh where I was to pay a visit to the people at Buck Consultants – they are having a dressing-down day tomorrow to raise funds for the ride and Cancer Research.  No-one told me about all the cobbled streets in the centre of the city – ouch!  Anyway, thank you to Fraser Smart, Karen Theobald, Annie Watkins and everyone else at Buck Consultants for their support.
Bike beats traffic! I soon got out to Portobello – faster than the snarled-up traffic – and then on to Musselburgh, which reminded me of Yarm with its Moot Hall (I think) in the centre.  Prestonpans is the ‘Mural Town of Scotland’ but I’m afraid the murals didn’t do a lot for me.
The wind was still to the rear as I got to Aberlady for a quick coffee and refuel.  The cake was now on its last legs, and in fact was about to disappear altogether. No amount of expert cutting will make it last forever! 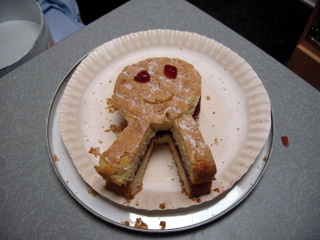 Nearby Gullane is full of golf courses, then on to North Berwick, which has an attractive harbour, where about a dozen people were standing all dressed up in lifejackets.  I asked three of them what was going on, to be told that they were about to embark on a Seabird Safari to the Bass Rock, where there were Gannets and Puffins (and old ale and sandwiches too… no, that’s another story).  Wishing them look I departed, soon to be met by a stunning view of the Rock itself. I hadn’t realised, when looking at it in the distance from the Fife coast yesterday, how close it is to the East Lothian coast. 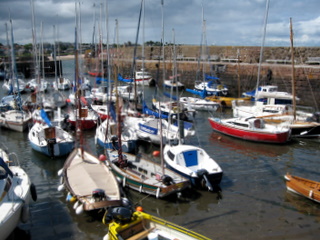 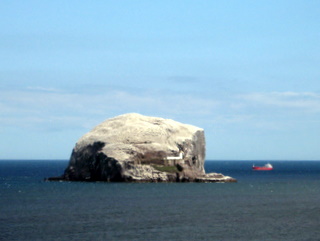 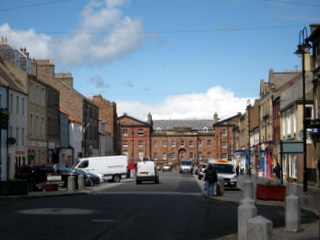 At Dunbar, where there have been two battles – 1296 and 1650 (Edward I and Oliver Cromwell respectively) – there is a big cement works, so I almost felt at home as I skirted it before making a detour to Skateraw Harbour (I’m almost getting in sight-seeing mode) where there is a good view of the modern Torness Advance Gas-Cooled Nuclear Reactor, which provides 25% of Scotland’s power. Sorry folks, but I can’t see the point of all those awful wind turbines when four medium-sized boxes can produce all the power you need with nil, zero, zilch CO2 emissions. Don’t write to me… 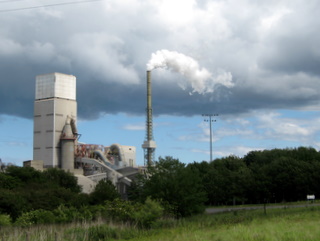 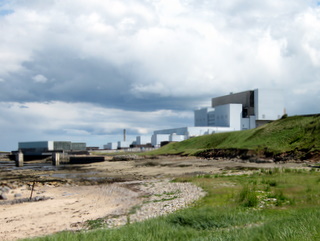 I managed to keep off the main A1 by dint of a few side roads (where there were lots of purple orchids), then dropped down to Pease Bay (the motorhome went this way too – I think Gerry and Peter enjoyed the ford) and then it was a steep climb up the other side, followed by several miles of gradual uphill slog on to Coldingham Moor.  The compensation was a long downhill, and then Eyemouth, which looks a bit sorry now although the harbour is pleasant enough, apart from a man who appeared to have just broken his phone and was struggling to find an adjective that didn’t start with the letter ‘f’. 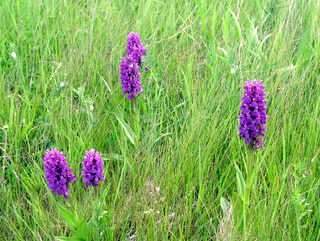 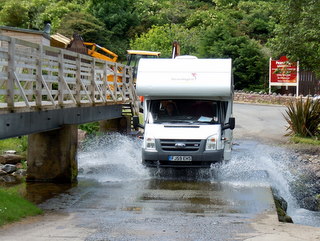 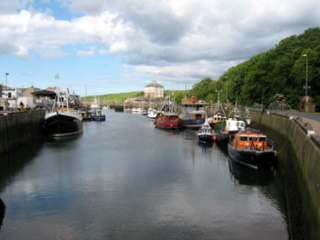 On the last stretch it was impossible to avoid the busy A1, but after a mile or so where there wasn’t much room for me and the juggernauts, it widened out into dual carriageway.  And then it was welcome to England! And what do you think is the first thing to greet you over the border? A caravan snack bar in a lay-by of course! 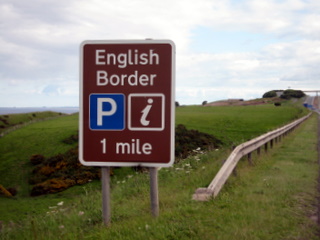 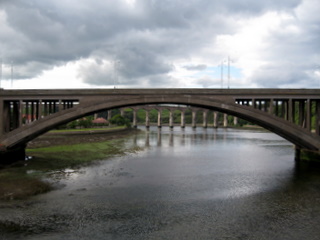 Berwick-upon-Tweed, historic but slightly down-at-heel city where even on a Thursday afternoon youths spill out of pubs and cross the road right in front of cyclists, flailing their arms around when, at the last second, they see you, almost knocking you off your bike.  When it’s your first experience back in England it’s a little disconcerting.
But hey, that’t a big milestone today. A couple more easy days with some riding company, then three long hard days (again with company, but different) – and I should be about half-way.  Or to put it another way, that’s the equivalent of doing it all again before I’ve finished the entire GB coast. Doesn’t that deserve a donation to Cancer Research UK?
Posted by Bill Honeywell at 20:51