46 miles; total 2,894 miles
Midsummer’s Day and birthday of daughter Catherine, who I remembered to send greetings to when I woke up.  My first concern was to get the bike repaired from yesterday’s incident, and had decided that rather than getting it done in Hastings we should get to Brighton and find a cycle shop there, so that they could have more time for the work.
I felt surprisingly good after the long day yesterday, but that didn’t last long, as the first bit of route was another long steep climb up Battery Hill, prior to the descent into Hastings, which I reached at the same time as the school run.
On the climb I was a bit concerned as the tree cover was so dense it made the road almost dark – but at least the motorists had better eyesight than one particular individual yesterday! 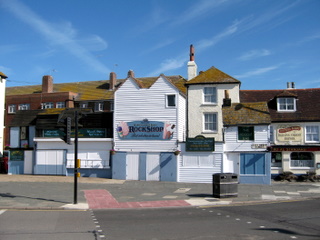 Past serried rows of hotels in Hastings (and a few slightly more idiosyncratic buildings) I reached Bexhill where, by prior arrangement, I called at “48” for a coffee with @festinagirl (Twitter again) and her two friends.  Very civilized, sitting at a pavement table having a fresh filter coffee, and of course, good to make another acquaintance. @festinagirl works in IT, keeping youngsters safe on-line, which seems a worthwhile vocation. 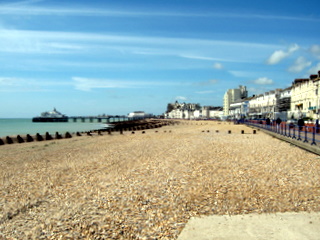 Eastbourne
Anyway, all too soon it was time to go, and with a feisty “Allez! Allez!” I was on my way to Pevensey Bay, then Eastbourne (now there are  a lot of hotels here!), and then the long easy climb out of  town on the road up to Beachy Head, where the wind had picked up and was buffetting the van as we stopped for refreshment. 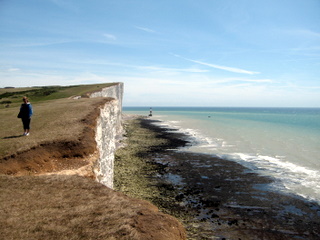 Here a freelance photographer called Raymond Hughes took a picture - hopefully destined for the local press - and directed me to the best viewpoint over a mile further on.  Just after this I met old friend and former Clitheronian Roger Lewis, who was having a day out with wife Diane and another couple (they live in Sussex now) – and we arranged to meet up again at Brighton. 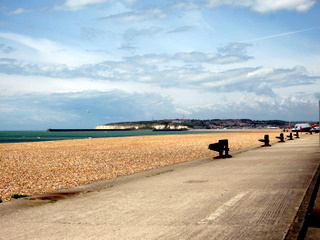 Seaford
Through Seaford (I must confess I hadn’t heard of Seaford before. Nice pebble beach though) then the old town of Newhaven, from where ferries sail to Dieppe – quite a busy place. Now the wind really got up:  the last seven or eight miles to Brighton were incredibly hard, with a series of ups and downs, and the wind almost ripping into me as I approached the top of each rise, almost enough to knock me over. On the downhill sections I was having to pedal hard to do 12 mph! It’s very hard mentally – much tougher than rain, as you seem to be getting nowhere all the time. 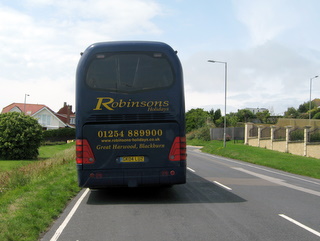 Finally Rottingdean, Roedean School and a coach from Great Harwood, only eight miles from home and where sister and brother-in-law Pat and Alan live. But of course we weren’t finished: after putting the bike in the van we were off into town to get the other bike mended. At Baker St. Bikes they were very helpful but because the wheel was ruined, they didn’t have time to build a new one up. But they rang another shop who could do the job and sent me on my way there, where everything was arranged.  Peace of mind.
Back to the caravan site, a convivial hour with Roger, Diane and their friends, and then… it rained!  I haven’t lost my touch just yet!
Posted by Bill Honeywell at 17:20