83 miles: total 2,403 miles.
The Rain Man Returneth!!
First of all, my apologies for this blog being a day late, due entirely to the complete lack on any phone signal at our location last night. Bearing in mind we were between two decent-sized towns only four miles apart (Sheringham and Cromer), I’m at a loss to understand why neither Orange nor T-Mobile can organise any kind of signal at all. The service in many of the remotest parts of Scotland is better. Quite frankly it’s a very poor do indeed and both companies should be ashamed of themselves. OK, rant over.
Last night’s (the night before last now…) sleep was somewhat disturbed, due to the fact that the local cockerels were holding their annual cock-crowing contest. It started at around 2.00 am and at one stage, Alan (popping out for a mid-slumber saunter to the gents) found one rooster sitting on the motorhome step!
But I didn’t feel too bad at my normal 6.30 wake-up time and got away, as usual, just before 8.00 in reasonably fine weather.  I’d suggested a first fuel stop just after King’s Lynn, thinking it would be just over 20 miles, but seriously miscalculated the mileage!  After some great quiet lanes south of the Wash, a detour due to one road being a rough track, and a stretch along the River Nene, I crossed the Nene at Sutton Bridge (lots of heavy traffic).  Then it was back into quiet country lanes again before approaching the Great Ouse crossing with well over 20 miles on the clock already! 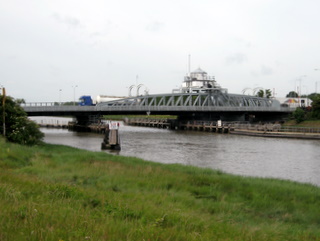 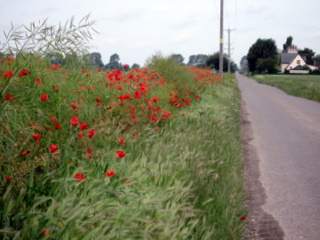 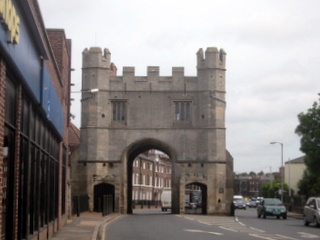 King's Lynn
The traffic in King’s Lynn was busy (I passed the HQ of Norfolk Constabulary here) but at least I didn’t have to go through the shopping centre, which I remember from a few years ago was just like every other shopping centre in the country – all multiples. After King’s Lynn came a rather genteel ride (a bit like Delamere Forest) past the golf course to Castle Rising and eventually a rendezvous with the van after about 35 miles!  I was ready for some big slices of cake.
Heading north with the wind behind me for once, I passed through a succession of Norfolk villages, with their distinctive walls of brick and cobbles or flints – Dersingham, Snettisham, and then Hunstanton, where I glimpsed the sea for almost the first time in two days.  I was surprised that there were any Wood Pigeons flying about as there were so many dead ones by the side of the road. 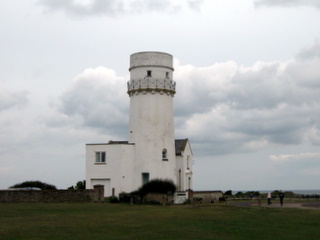 Hunstanton Lighthouse
From Hunstanton the A149 becomes a much narrower, quieter road with more bends than before, passing through a succession of villages, which whilst not all stunningly beautiful are nevertheless very pleasant. Even if you can’t do this journey on a bike it’s worth travelling along here in a car to enjoy the scenery.  Holme-next-the-Sea, Titchwell (famous for its bird reserve), Brancaster, Burnham Overy Staithe, and many more. 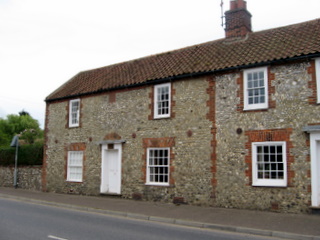 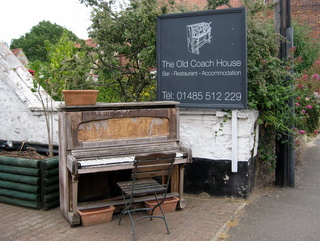 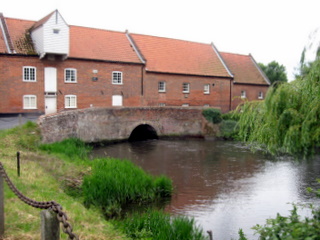 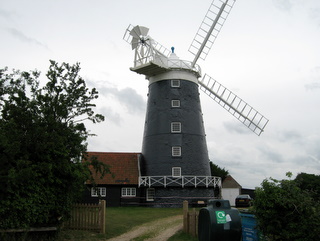 Holkham Hall shows signs of big money in days gone by – as one approaches, the high brick estate wall goes on for miles – just imagine the cost of building that now!  Almost opposite there is a drive leading down to the sea, and it was here that I had the day’s second pit stop – after 61 miles. As I reached the motorhome a Little Egret flew over – a bird that would have been a great rarity 20-odd years ago, now commonplace: a small heron, perfectly white, with black legs and bright yellow feet.
It had been getting cloudier and threatening rain, and almost as soon as I had set off for the last twenty miles, it started. And no drizzle either – a heavy, prolonged downpour. It was clear from looking at the fields that there had been no rain for a long time. Now, as I arrived, my ‘Rain Man’ title seemed well-earned. Although I’ve managed a few dry days since last Sunday’s wetting, I am without doubt jinxed on this ride as far as the weather is concerned. 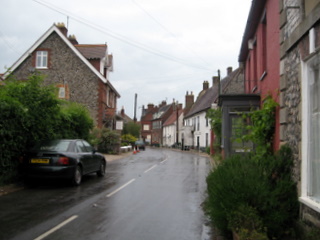 Cley nest-the-Sea
So Wells-next-the-Sea, Stiffkey, Cley and Sheringham were all visited in ‘orrible wet conditions, not really condusive to taking photos.  My main aim was to get out of the wet (and the cold) as soon as I could. 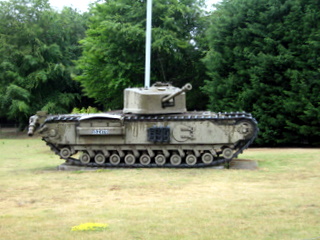 At Weybourne there is the Muckleburgh Collection of military paraphernalia, advertised by a tank by the roadside. I thought I’d take a photo. Unfortunately a few seconds before I had this brainwave, someone else had parked his car and gone over to the tank with a teddy bear mascot, and proceeded to photograph ‘Teddy’ in various positions – on the front apron, sitting on the tracks, perched just inside the barrel – oblivious to the fact that I was standing there getting even wetter, just waiting for him to get out of the way!
The last ten miles were surprisingly undulating, with lots of small hills to go up and down – the first time I’d used my small front chainring for three days after the flatness of Lincolnshire and The Wash! 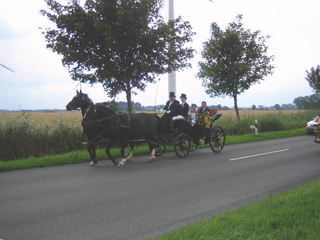 German wedding, Otterndorf 2005
Sheringham is twinned with Otterndorf in North Germany – it’s on the North Sea Cycle Route and I was there a few years ago when this wedding was taking place!
The Caravan Site just outside Cromer at West Runton is a vast, sprawling affair with 256 pitches (the warden seemed unimpressed when I said that this was 2 to the power 8, or 16 squared) and, as I’ve already mentioned, no phone signal.
Tomorrow (today!) is Saturday and another change of crew. Peter, Joan and Alan will be replaced by Tony Spencer and Simon Clarke – so once again thanks to the ‘retiring’ crew and welcome to the new gang, who should just  be getting the hang of things when it’s their turn to go next weekend!
PS Two more milestones today – Donations and pledges have now gone over £8,000 (still nearly £12,000 to go to reach the target of £20,000) and less than 2,000 miles to go!  About 1,962 miles left, in fact. KPO!
Posted by Bill Honeywell at 15:26