Dornoch to Findhorn: 74 miles; total 1,509 miles
We woke up to a gorgeous, calm sunny morning in Dornoch, which augured well for the day, but spirits sank when I checked the bike SatNav and found that it hadn’t charged during the night and the battery was almost flat.  It was properly connected and the charger was switched on – could the battery have failed? But when I connected it to another charger it started to work, so we kept it charging during breakfast and kept our fingers crossed. 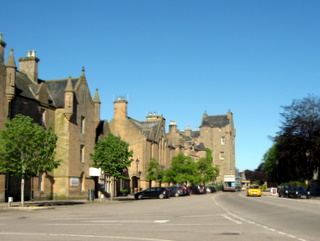 On the way out we discovered that Dornoch is a very classy little town, with lots of fine houses.  After crossing the Dornoch Firth, we turned into Tain (home of the Glenmorangie distillery) then found an old-fashioned ironmongers where we bought screws and strong adhesive to repair some cupboard doors in the motorhome.  I’m not sure what the crime rate is in Tain but there was a motorbike propped up on bricks! 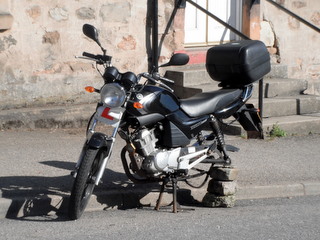 Along more country lanes, past the Nigg Oil Refinery and then we were at the Nigg Ferry which runs across the Cromarty Firth. We arrived just in time: a single car drove off and then we rode on, and had the boat to ourselves as we enjoyed the view of several parked-up oil rigs. 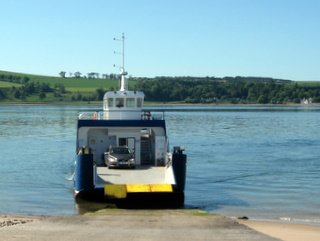 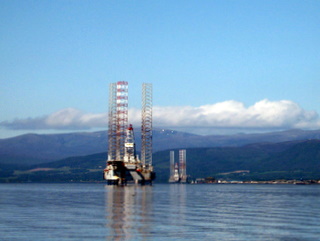 Now we were on the Black Isle, and a long climb from Cromarty followed. It’s quite a green, lush area, with some pretty towns and villages: after Fortrose we had our first stop, having done over 30 miles, and as we set off a bit of a headwind had begun. This time we weren’t worried as we knew that we’d soon be travelling in the opposite direction and would get the benefit of it.
There was a scary section of A9 with heavy traffic thundering by, before the Kessock Bridge over the Moray Firth into Inverness, which at least has a cycle path out of the way of the heavy traffic. The bridge itself is a bit scary too – as we stopped to take photos we could feel the bridge moving a lot as the traffic pounded over. 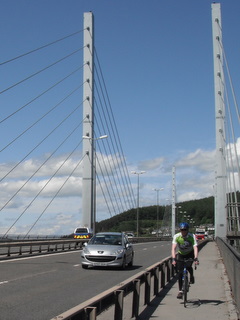 After another busy stretch on the main Inverness – Aberdeen road, we joined quiet country lanes again, firstly round Ardersier into Nairn, and then through surprisingly arable countryside east of Nairn, where there are fields and fields of wheat and… Christmas trees! 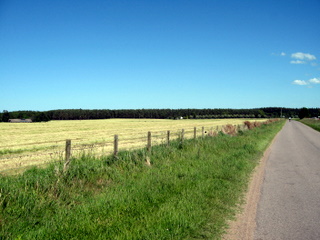 When we saw a NCN1 (National Cycle Route) sign to Forres we decided to risk it, even though it wasn’t planned. It was a useful small shortcut, involving a mile or so of unsurfaced track and a Bailey Bridge – so I’ll include a photo for my Dad, who used to build them as a Royal Engineer during WWII. 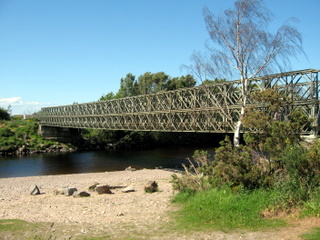 I also had to include a photo of this excellent advertising sign for firewood - well, I have to admit, it's probably spelt phonetically! 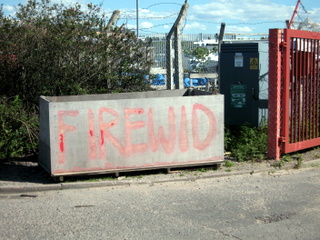 Soon we were past the Kinloss RAF Base and, after a relatively short time for our 76 miles, we arrived at Findhorn Sands Caravan Site, our home for tonight. I’m getting used to this nomadic existence. 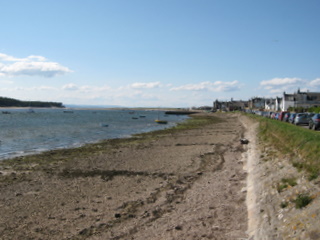 Change of crew tomorrow – Mark and Sandra are off home, and I’m also saying goodbye to Mick Bryan, my cycling companion for the last week.  Thanks for all your help, all three of you.  Next week’s crew are Peter Spencer and Gerry Bindless, and if they’re like everyone else they should just be getting used to the van and the routine by the time they are due to leave!
Posted by Bill Honeywell at 20:40