80 miles today, total 1,432 miles
First things first. Today – Day 21 - was the first day since Day 1 without rain. Quite a statistic!  And on the radio this morning I heard someone banging on about how dry it’s been for the last three months. NOT WHERE I’VE BEEN MATE!! I’ve been growing webbed feet up here for goodness sake!
Ah well, enough of my wingeing. Looking out of the motorhome this morning it looked good, and it felt quite warm, so after a long search I found some shorts and put them on. Problem.  After three weeks under longs, my legs had become somewhat etiolated and it wasn’t easy to tell where the unfortunate limbs finished and my white socks started. 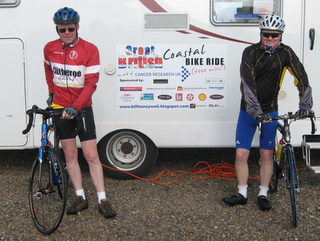 Leaving John o’ Groats we soon discovered that we hadn’t managed to shake off the wind.  It started as a crosswind but a quick look at the map confirmed that after Wick it would be in our faces.  Wick is looking a bit sorry these days – lots and lots of empty property in the town centre and yet there’s an out-of-town retail park with Aldi, Argos etc. Isn’t that what Town Planners are for? They certainly seem to have missed a chance there. 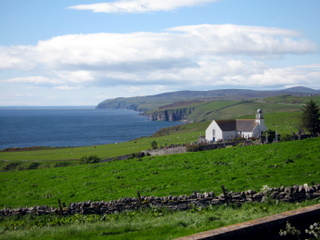 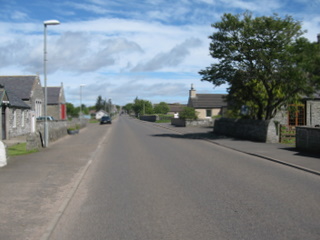 Lybster
From Wick the coast is a bit reminiscent of the North York Moors – medium-height cliffs, heather and gorse (and snow plough poles). We ploughed on into the headwind, with speed frustratingly low, through places called Thrumster, Ulbster, Lybster, and Latheron.  Then a long, steep, exhilarating drop into Berriedale and a long climb on the other side, to meet the van for lunch – warmed up fish pie! 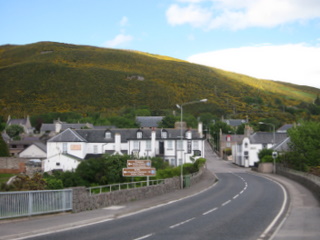 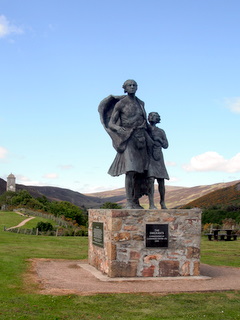 Monument to the Clearances, Helmsdale
For the rest of the day the old legs felt decidedly lethargic.  Through Helmsdale with its harbour and railway, and on to the surprisingly large village (town?) of Brora, where we met someone going the other way who was doing Land’s End – John o’ Groats in 6 days. Too quick for me, and no chance to enjoy the scenery, surely? 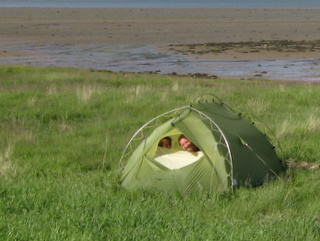 The last stretch, with the sun still shining, was through Golspie, then along Loch Fleet to our final destination.  I stopped to take a photo of the Loch with a tiny tent in the foreground, when from the tent came a cheery “Hello!” – it was occupied by a couple who were walking from Land’s End to John o’ Groats – a 10-week marathon (same as mine). A very jolly couple they were! 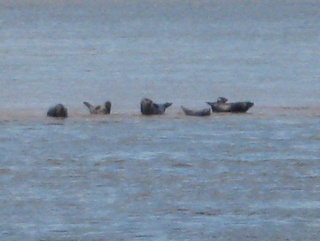 Just after this several seals were hauled out on a sandbank a good way out.  This was a really pleasant end to the day – an extremely scenic little road – finishing in Dornoch where there’s a good-sized caravan park next to the golf course.  Mick’s legs were a bit red;  I’d put on some Factor 15 earlier so apart from a little toasting mine were fine, fortunately, but no doubt certain members of my family are already waving fingers at me and sending gallons of Factor 50 as I write!
A final thought: are the inhabitants of Dornoch called Dornochers? Answers on a postcard please.  Oh, and another final thought – from today I’ve under 3,000 miles to go!  No problem then!
Posted by Bill Honeywell at 21:09