32 miles: total 2,894 miles
It rained quite a lot during the night. During the evening I managed to clean the bike and give a good ‘seeing to’, so hopefully it will keep going for long enough.
This morning it was windy, cloudy, cold and drizzly, though not necessarily in that order.  When I reached Brighton seafront I turned right and headed into the wind, vying with joggers and getting pretty cheesed off by the cyclists who were coming the other way at 20 mph compared to my 10! 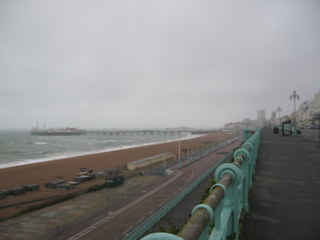 Marine Drive, if that’s what it’s called (if it isn’t, it should be) is quite high up, with various developments at a lower level nearer the sea, but I didn’t go down there as I was getting enough sea-spray as it was.  I cycled past one pier, then the apparent ruins of another, all the time looking for the famous Brighton Pavilion. But Brighton Pavilion never materialised – nobody had told me it was set back off the seafront – how disappointing! 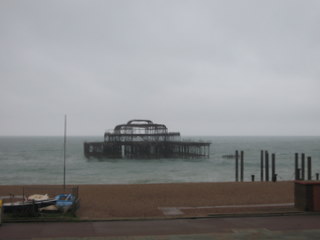 Shoreham came next – quite industrial with docks and warehouses – and a cycle track over the sea-lock gates, then Worthing, by which time I was getting pretty cheesed off with the ‘Dutch Mountain’ I was up against.  There was absolutely no respite from the wind, and if I had stopped pedalling for a second I’d have been going backwards. KPO, KPO.
I turned inland slightly – oh, blessed relief for a few hundred yards.  I passed a shop with the sign 'Renal News' - I had no idea that there would be a journal specifically for kidney updates! 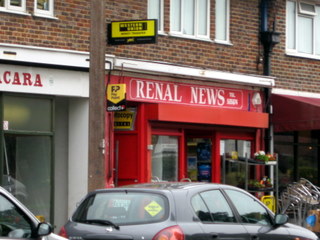 Turning towards Rustington, Val rang to say she’d arrived at the Bognor caravan site after a five hour journey – I told her that with the bl**dy headwind I’d probably be another two hours before I got there.  She must have wondered what on earth I was talking about, because within ten minutes the wind died down a bit and suddenly life became so much easier.
Now, you will understand that after cycling nearly 3,000 miles – even with a classic Brooks leather saddle (no springs) – one’s backside begins to show some signs of, well, er, let me say fatigue. So when I saw the following sign – 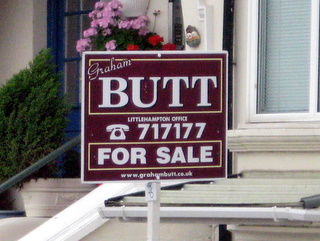 I thought salvation was at hand. So I rang the number, but it seems I got the wrong end of the stick somehow. I thought estate agents were bound by the Property Misdescriptions Act.  Perhaps I should sue for damaged feelings… 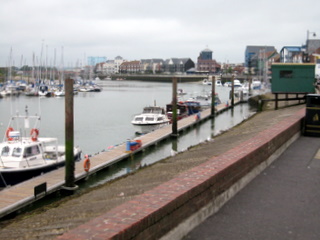 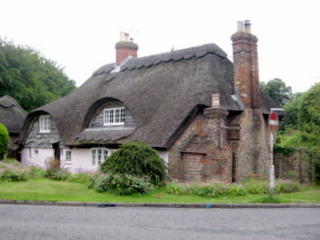 Littlehampton was rather Victorian to start with, then all river and boats and stuff.  With one very nice old thatched cottage.  Middleton-on-Sea looked very affluent.  Finally Bognor Regis and the caravan site, where I found departing crew Simon and Tony handing over to Val and Alan, but with the added company of my good friend Janet Spedding’s brother John and his wife Pam, who had driven over to meet us. And soon after they left, my very old (as in of longstanding) pal Jeremy Rodwell and his wife Wendy also arrived to say hello – so it was a sociable afternoon!
Tomorrow I head towards Southampton and there are three ferry crossings to make before arriving at Warsash. Then on Monday, through Southampton, Christchurch (where Val’s cousin John will be waving me on to Swanage.  By which time I’ll have gone through the 3,000 mile barrier. Keep reading folks – and keep donating to Cancer Research UK please!
Posted by Bill Honeywell at 18:59