35 miles – total 3,195 miles
When I planned this route I decided to allow some margin every now and again, partly for rest, but also so that if I fell behind schedule I could have a chance of catching up.  Today and tomorrow are two such days, and they coincide with the chance to meet up with some old friends.
Perhaps it was good timing, because for yesterday’s supper we treated ourselves to fish and chips, and overnight I felt decidedly under the weather – whether the two were connected or not I don’t know, but this morning I was certainly not at 100%.
I got several messages to say that I had been on BBC Breakfast TV but sadly all were mistaken – all I can think is that someone else is cycling around Britain and has better contacts that me!  If anyone can tell me who it was, please let me know. 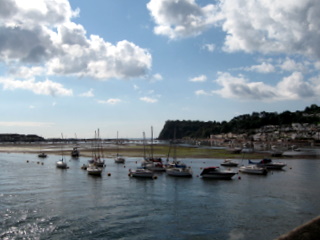 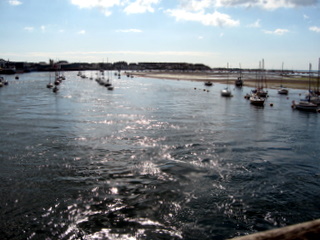 So slightly later than usual I set off through Dawlish and Teignmouth before crossing the bridge over the Teign into Shaldon, which has its name spelt out in an old fashioned floral display at the side of the road.  It’s a long climb out of Shaldon but the rewards are great views back to Teignmouth.  The road is busy though, with lots of heavy traffic. 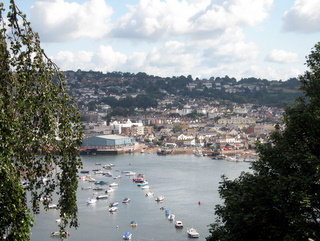 My father was born and bred near here, in Buckfastleigh, and as I pedalled I was reminded of all those family holidays which seemed to consist solely of visiting relatives, and getting thoroughly bored while Mum, Dad and Aunty so-and-so chatted away for far too long about things which didn’t interest me in the slightest.  I’m sure there were some visits to the beach too, but that wouldn’t suit me now either!
I managed to resist visiting the model village in Babbacombe, on the outskirts of Torquay.  Many years ago Fairport Convention recorded a concept album called Babbacombe Lee – not to everyone’s taste, perhaps, but one of my favourites.
In Torquay a motorist pulled alongside, opened the window and asked if I was Bill Honeywell – somewhat taken aback, I said I was, so he stopped and explained that he was Mike Bell, a friend of Michael & Liz Parkinson in Clitheroe, knew I was doing the ride and followed me on the tracker at www.fleetsmartlive.com until I was nearby.  Nice of him to take the trouble. 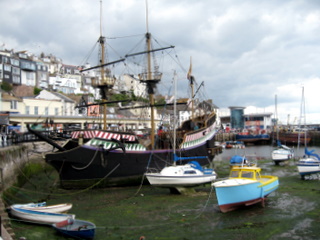 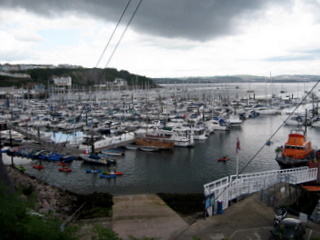 Brixham
The traffic in Torquay, Paignton and Brixham is terrible – goodness knows how frustrating it must be to live there and spend most of your life stuck in a queue! But I finally got through to the harbour at Brixham (a replica of Sir Frances Drake’s Golden Hind is still there) and then made my way up to Berry Head, a fortification built during the Napoleonic Wars when it probably replaced an iron age fort.  I got talking to someone who, in his younger days, used to time-trial fixed wheel bikes, and remembered going down Haldon Hill (?) into Plymouth so fast he couldn’t keep his feet on the pedals. He gave me a tenner for Cancer Research UK too. 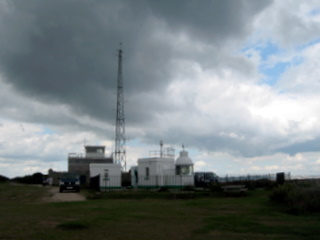 We got talking because I don’t have a bell on the bike and I was coming up behind him (he was in a group of three, filling the path).  What I do in these circumstances is either shout “DING-A-LING!!” or something like “I haven’t got a bell but will ‘DING-A-LING’ do?”.  Most people, including today’s gentleman, see the funny side.
Meanwhile the van had been held up by a bad traffic accident, so I didn’t get lunch until the top of the hill before Kingswear, after which it was a fast descent to the Lower Dart Ferry – a strange affair.  There are two vessels which each take eight vehicles;  they are each driven and manoeuvred by a tug which runs alongside – I’ve never seen anything like that before. 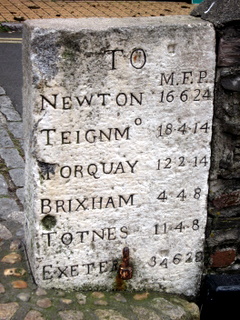 Milepost near the Lower Dart Ferry 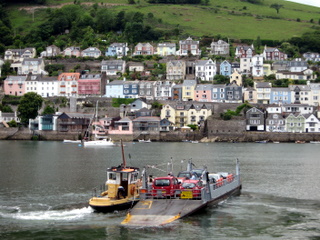 Dartmouth is full of character, with steep, narrow streets and an old castle on the headland.  After paying a brief visit, and meeting a holidaying couple from Lancashire, I girded up my loins for the long, long climb to the A379 which led to Stoke Fleming.  We were early, so carried on to Blackpool Sands just beyond. Almost as soon as I arrived, our friends Andrew and Merida turned up too, so it was time for an ice cream and a catch-up before we decided that the motorhome won’t fit in their drive and we’d better book in to a caravan site nearby. 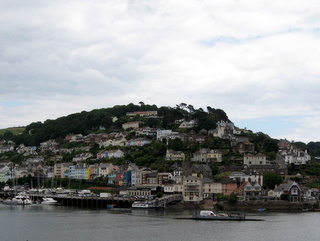 Looking back to Kingswear
We’ll go out for a meal tonight before another easy day tomorrow.  But on Saturday the hard work resumes in earnest, with over 70 miles, two ferries, plenty of hills and a change of crew.
Posted by Bill Honeywell at 18:03