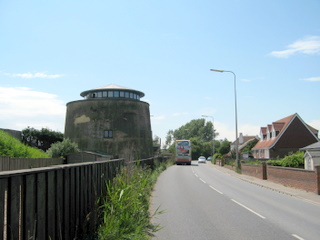 So there I was, with my bike tucked neatly into the side of the road, taking a picture of this convereted Martello tower, when I was attacked.  Rather like being bitten by a Boxer dog, the offending motor car just sneaked up and assaulted me from behind.  It wasn’t even going fast enough to knock me off the bike (although it nearly did); and if I hadn’t been there, I’m sure the driver would have run off the road anyway.
I shouted “STOP!” but the driver carried on, followed by another three or four cars. I set off (amazed that my bike was still capable of forward propulsion) shouting “STOP!” a few more times;  there were some temporary traffic lights 100 yards further on, and the car came to a halt, somewhat erratically, just before them in the driveway of the Martello tower.
I approached the driver’s door and said to the old lady behind the wheel,
“You’ve just run into my bike!”
“What are you talking about?”
“You’ve just run into my bike! You need to stop, get out, and have a look at the damage.”
I went round to the passenger side, realised my back wheel was badly buckled, and when she appeared, pointed out the scratch on the front nearside of her car.
“That’s only bird shit,” she said. “You must have been sticking out.”
“I wasn’t, and even if I was, that doesn’t mean you can drive in to me.”
“I was stopping for the traffic lights, they were on red, but I never touched you.”
I replied that it was a bit odd to stop over 100 yards before red traffic lights, and asked how she could explain the buckled rear wheel if she hadn’t actually hit me.  Garbled, muttered reply.
I took her number and said that the police would have to be called. I asked her for her name – she replied that she didn’t have a name, but got back in the driver’s seat, saying,
“I’m a cripple.”
As she waved her blue disabled badge at me and drove off, almost causing another collision from the two cars which were coming up behind her.
What could I do?  For the second time on this ride (see my blog about the tree falling on the motorhome, 24 May) I dialled 999, gave all the details, and waited for a police patrol car to arrive. Meanwhile the van arrived to give assistance and we got the other bike out ready to proceed.
The police arrived quite soon and took the details.  I got the impression they were on my side as they looked at me, clad in bright yellow and black, and said “It’s not as if you were difficult to see!”  Details given, I set off, leaving them to visit the miscreant driver and point out the error of her ways, such as careless driving, leaving the scene of the accident, failing to provide details after an accident, etc.  They later phoned me with her details, including insurance, and said they had reported her for careless driving and notified the DVLA requesting proof of acceptable eyesight.  Only fair, I think.
Now I’m left with the problem of getting the bike fixed.  I set off again, badly delayed and still with 30-odd miles to go.
Perhaps she should have gone to SpecSavers…
Posted by Bill Honeywell at 18:51