43 miles – total 2,488 miles
If you were wondering why I keep having fairly short days of around 40 miles it’s because originally I planned on doing around 70 – 80 miles a day, with a day off every four days or so. But then I decided I’d just be bored on days off, so I converted them to two consecutive short days of around 30 – 40 days.  The net result is the same but I think it works better – certainly I feel well enough rested.
For a complete change, yesterday evening we went out to a pub for something to eat – scampi and chips at The Avenue, Great Yarmouth, which was fine except that the waitress insisted on asking us if everything was alright – every two minutes!  The caravan site is ON the racecourse (you have to drive or cycle across it to get there) but I don’t know whether you have to pay extra on race days. 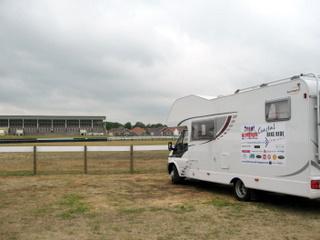 Today is Father’s Day so I started off with a card from daughter Catherine, who also sent some of her home-made chocolate brownies which are DELICIOUS – let me know if you want the recipe and I’ll get it for you in exchange for a £5 donation to Cancer Research UK! 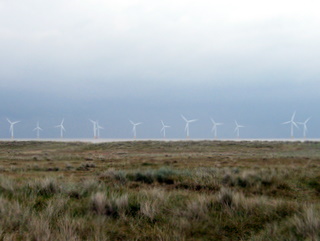 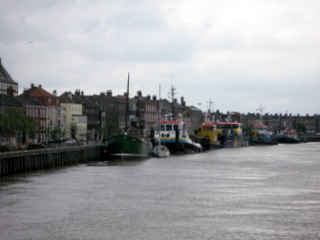 There are plenty of offshore wind turbines at Great Yarmouth, but I won’t tell you what I think about those.  I lost my sense of direction going through the town, then headed out through Gorleston and followed the directions of Alison, whose caravan site we stayed on at Muasdale in West Kintyre: she was brought up in this area and sent me along a rough track by the golf course where there were signs advising “DANGER OF FATAL INJURY FROM FLYING GOLF BALLS”. 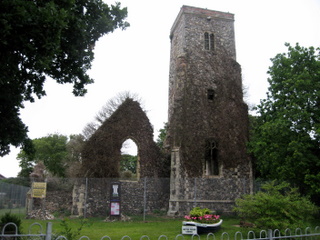 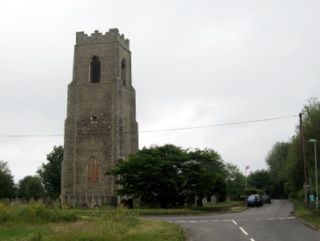 Alison’s sister Pat and her husband were waiting to greet me in nearby Hopton: they had heard about me via Twitter and it was a pleasure to meet them – what’s more, Pat gave me a donation for Cancer Research UK! The church in Hopton is derelict, strangely; the one at Corton also seems to have some bits of roof missing, but is in use, and is also where Alison was married.
I've been to the most westerly point - Ardnamurchan Point - and the most northern - Dunnet Head - and now I visited Ness Point at Lowestoft, the most easterly point in Britain. That's three out of the four (only Lizard Point left). It's a fair bet that Ness Point is the least exciting! 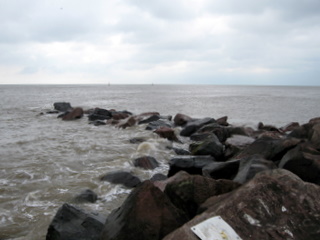 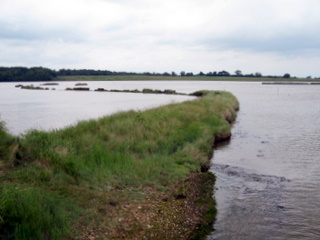 Southwold is the home of Adnam’s brewery – their tipple is available at home in Lancashire and most acceptable as I recall.  Soon afterwards I crossed the River Blyth at Blythburgh and then headed to the pretty village of Westleton, turning left towards Minsmere RSPB reserve. 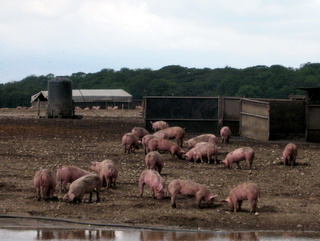 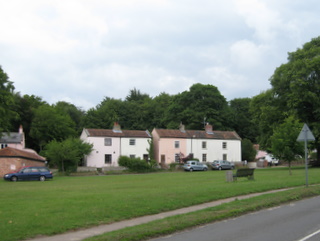 Westleton
I’ve been a member of the RSPB most of the time since I was about eleven years old and never been to Minsmere, so I made a brief diversion to the visitor centre and told the ladies there what I was doing. They nearly told me off for not having visited before, so I explained that I was from ‘oop north’, and Leighton Moss was my local marshland.  Pity I didn’t have my binoculars. 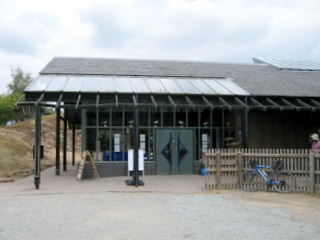 Minsmere Visitor Centre
On the way back I met a group of four cyclists from Sheffield on a 10-day tour of East Anglia. At first they seemed to be wary of the fact that I was from Lancashire and therefore ‘one of the opposition’ – I explained, on the contrary, that in this part of the world I considered a Yorkshireman to be the next-best thing to a Lancastrian. All very tongue-in-cheek, don’t write in!! (Although two previous encounters with (presumably) local cyclists today had resulted in a very unfriendly response – i.e. no response whatsoever – each time!
The countryside is much more wooded than I expected; it soon opened out though, then past an oddly-sited Household Waste Disposal Site and Sizewell nuclear power station was in view.  Tonight’s caravan site – Cliff House – is close by, and I arrived here in good time to find new crew Simon and Tony looking very pleased as the place has a very acceptable-looking bar. With draught Adnams. So having cleaned and serviced the bikes, I’d better get this blog posted before I’m dragged over there for a couple!
Posted by Bill Honeywell at 18:17