65 miles: total 3,160 miles
Glorious Devon, at last!  But those hills!
At 7.30 this morning I was enjoying my usual breakfast of kippers and Earl Grey tea (only kidding! – cereals and milk!) whilst to my right, people on the caravan site were already sunbathing, which I must admit I found rather odd. 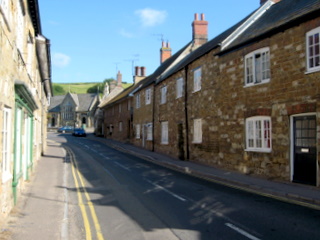 Abbotsbury
Chesil Beach ran parallel to the coast even when the road went some way inland, but later I neared the coast again at Abbotsbury, home of the famous Swannery and a pretty village in itself.  Then for some reason there was a bit of a cock-up on the route-plotting front:  On my paper map I clearly crossed out the track that runs right alongside Chesil Beach after Abbotsbury, but it was still plotted that way on my SatNav so that’s the way I went. 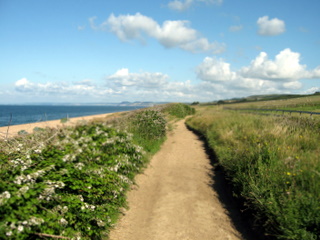 The road got rougher and rougher and eventually almost merged with the beach: I ended up walking some sections but at least I could see a car park in the distance, so I knew that eventually I’d end up back on tarmac, at West Bexington as it happened.
At Bridport my route left town on a narrow lane which climbed steeply for some time. A man in one of those convertible two-seater Mazda sports cars shouted at me, perhaps because he thought I was out of order not veering off into the verge on my side.  The irony of the fact that his wife was driving far too fast, and that he was holding their toddler on his knee (!!) seemed to escape him. 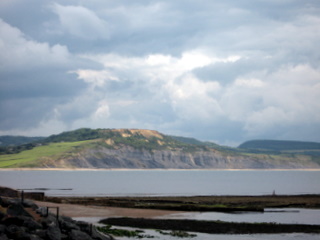 From now on the route along Dorset's famous Jurassic Coast was a repeating succession of long climbs, then a drop down to a town or village at sea level, followed by another long climb, and so on.  First Chideock and Charmouth, then Lyme Regis, with The Cobb which featured in The French Lieutenant’s Woman. 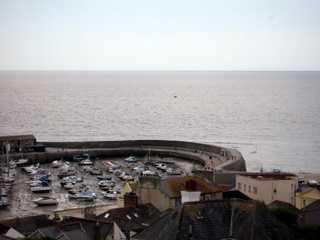 The Cobb at Lyme Regis
Just out of Lyme Regis came the ‘Welcome to Devon’ sign, an encouraging sight, and the ups and downs got steeper!  At Axmouth there was yet another Ship Inn, as well as the oldest standing concrete bridge in England. 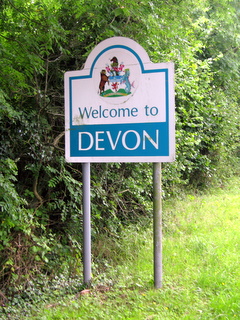 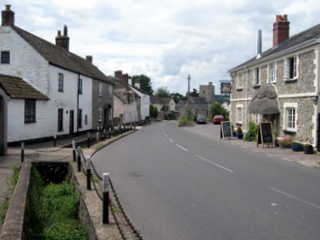 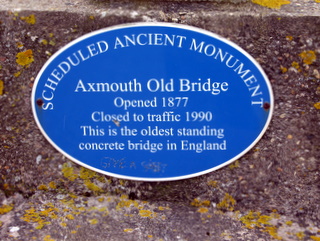 Seaton, Beer and Branscombe – all in beautiful country;  there is a traditional old-fashioned forge in Branscombe, and a church with a strange turret on the side.  Some other scenery is truly uplifting – like the mass of purple flowers planted at the roadside by a crossroads. 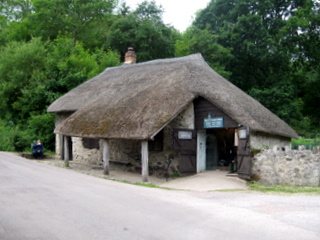 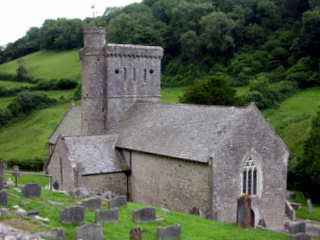 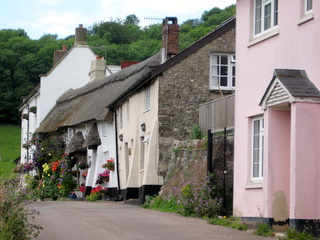 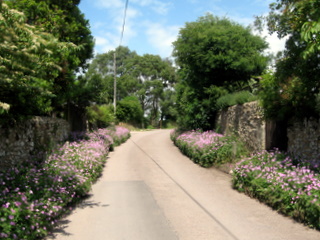 There is a famous Donkey Sanctuary at Weston, and just before Sidmouth I came across the Norman Lockyer Observatory, established in 1912 and very much involved in education. 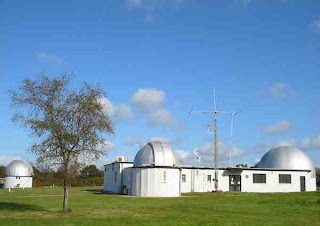 After a pit stop in Sidmouth came the longest, steepest hill of the day – I thought it was never going to end!  I’ve always thought Budleigh Salterton was a wonderful-sounding place, but (although there was nothing wrong with it) I wasn’t struck by anything unusual. 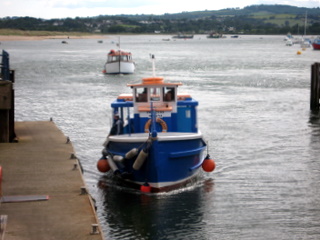 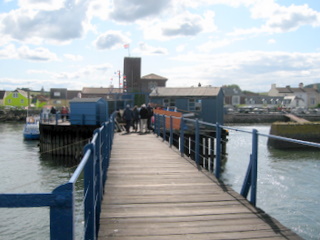 After some proper country roads (with grass growing in the middle) on the outskirts of Exmouth, I arrived at the ferry to Starcross, with a 45-minute wait on my hands.  Once on the water it was really cold and I was glad to get off at the other side – which involves crossing the railway line on a footbridge for good measure.
From the pretty village of Starcross it was a short ride to tonight’s caravan site, Leadstone, at Dawllish. When I arrived I thought for a split-second that my dad had turned up, but it was his brother, Arthur, who lives in Dawlish and came out to say hello.
Overall a good day- hard work up all the hills, but somehow they are easier for the mind to deal with than headwinds – perhaps it’s because you can see them, perhaps it’s the fact that with headwinds you feel you’ve been unlucky – on another day they might have been behind you – I’m not sure.  But I didn’t mind the hills too much today.
Tomorrow, after Torbay, we are staying at the house of some friends, so I’m hoping I’ll be able to do the blog as usual but if not, I’ll catch up soon after.  I’m getting my sights set on Land’s End…
Posted by Bill Honeywell at 19:39