65.7 miles, total 2,960 miles – today I passed the 2/3rds mark.
The day dawned with great anticipation – yesterday’s weather forecast was for a very warm day with lots of sunshine. The reality was cool, with grey cloud, and light drizzle. I wasn’t surprised.  Of Bognor Regis I saw surprisingly little – virtually nothing at all, in fact, before I was in Aldwick, the suburb to the west. 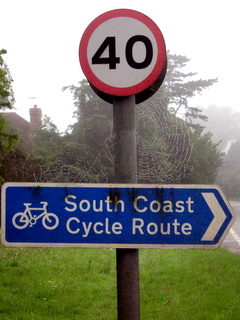 Notice the drizzly cobwebs
On the way to Selsey I had to keep wiping the drizzly spots of my glasses.  Now Selsey is where Sir Patrick Moore lives, although I don’t know exactly where.  It did strike me as slightly amusing that there is a pub called The Neptune there.  Selsey Bill is, to be fair, just another bit of beach when you get there. 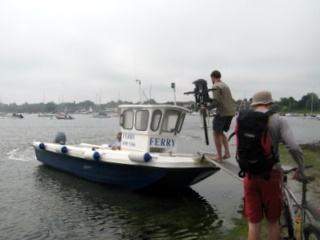 Pleasant country lanes took me via Wittering to the ferry at West Itchenor (well actually, pedalling took me there but “pleasant country lanes” sounds better). I just missed the Itchenor Roll-on-Roll-off Ferry (see picture) but got chatting to a lady who was going across the water for a bike ride with her two daughters whilst her husband messed around on the water. 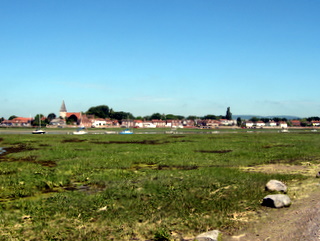 Bosham is a very pleasant village and clearly a bit of a tourist hot spot.  The sun came out and the sky turned blue – fantastic!  A bit of main road through Nutbourne and Emsworth before the causeway to Hayling Island – partly very rural and agricultural, partly touristy with miniature steam engine and beaches.  Approaching the ferry, a fret seemed to move in off the sea, forming an atmospheric mist over the marshes. 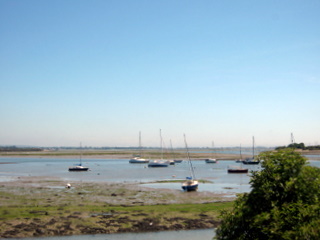 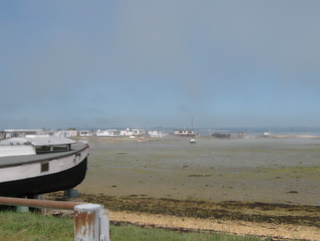 Now I like to say something nice about people wherever I can, but I’m a bit stuck when it comes to the couple who operate the Hayling Island to Portsmouth Ferry.  A more surly woman I find it difficult to imagine.  And her other half had clearly been to the School for Traffic Wardens when it came to marshalling people as they embarked.  There were lots of bikes aboard, and the picture perhaps warrants a caption competition. 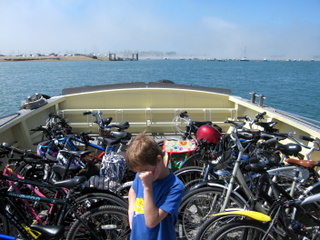 Not that I’m a nit-picker you understand, but just off the ferry I did appreciate the gratuitous apostrophe on the blue van. 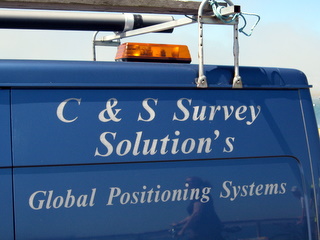 Through Portsmouth now and on to a very big ferry to Gosport where you had to buy tickets at a machine!  The Millennium Tower looks great but does nothing apart from having an observation deck or two at the top.  I love form and function, but this edifice gets 10 for form and 0 for function, making it a bit difficult to judge. 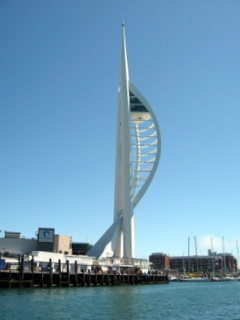 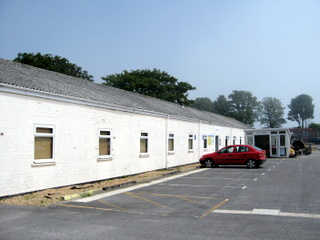 I saw a sign for the National Submarine Museum and remembered that my great uncle Richard Honeywell had entered posterity by welding teeth on to stripped gear, which was later exhibited in the museum.  But the guy at the entrance had never heard of it, and I didn’t fancy paying the £10 entry to find that it had been removed, so I carried on. 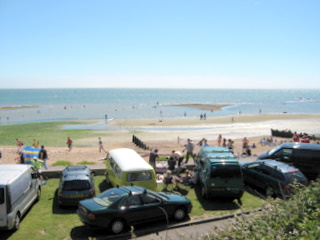 Lee-on-Solent is a popular seaside resort and was certainly busy today.  Our venue for tonight, Dibles Caravan Park at Warsash, is excellent – spotless and a great welcome.  Soon after arriving we were visited by Suzanne (sister of my good friend Bernadette Brown) and Keith, and spent a convivial half hour in the sun. 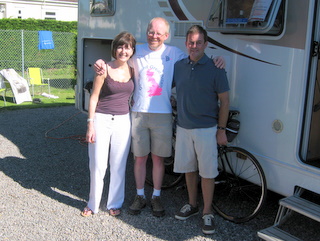 So another day, another milestone (2/3rds done!).  Tomorrow should be 81 miles to Swanage vial Southampton and Bournemouth – let’s hope the weather holds!
Posted by Bill Honeywell at 19:08