99 miles – total 2,815
·         Longest day yet
·         A day of headwinds
·         Attacked by homicidal driver
·         The first puncture
So after we got sorted out with the police I was ready to go again, back on the original bike I’d started the day on.  Oh, I forgot to mention that earlier, between Dover and Folkestone, I had a lifetime closest encounter with a fox – I was cycling uphill, not very quickly, with masses of brambles on my left, when, no further than two bike lengths in front of me, a fox emerged from the brambles fully on to the road, saw me and (presumably) thought “Cripes!!”, turned around and disappeared again split-seconds before I would have run over its brush. Fabulous.
Right, back to Dymchurch. At St Mary’s Bay I turned left for Dungeness, only to find that the road was rough and I had to turn back.  I then found the tarmac route from New Romney, with blackening skies and signs of a cloudburst in front.  As I approached Dungeness though, most of the rain had passed by, and it was only pouring down when I got there! 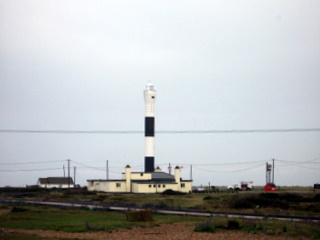 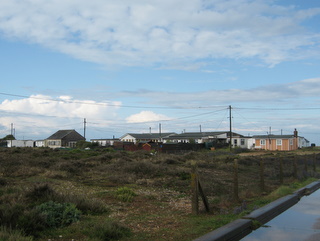 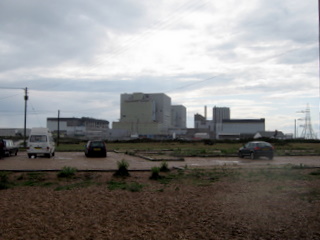 I am told that houses in Dungeness go for a minimum of half a million quid. God only knows why. The only impression I received was of a shanty town of semi-derelict wooden huts, completely out of place and in dire need of a good bulldozing (I bet I’ve offended somebody there…)  Added to this were rough roads of broken concrete, two lighthouses, a few other assorted buildings and… oh yes, a massive nuclear power station. This actually appears to be the best maintained building for miles around (thank goodness!).
As I was about to set off after my coffee and cake (at 5.30, with 24 miles still to go!) PC Porter rang me to say he’d visited the lady driver and got everything straightened out; he gave me her insurance details and wished me well. Finally I set off, only to find I had a flat rear tyre – the first puncture in over 2,500 miles.
I changed the inner tube only to find out that the valve was too short and I couldn’t blow it up. So I had to change it again with another inner tube.  It was now gone 6 o’clock.  Off I went but there was a bumping at the rear – the inner tube hadn’t seated properly, so I had to do it all again! Aaagghhh! 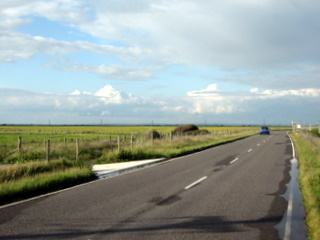 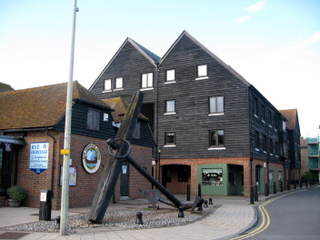 Off across the Romney marshes into the teeth of the wind, for what seemed forever:  through the village of Lydd (nice church), then another eternity before I reached Rye.  Rye is full of character – another of the Cinque Ports.  At Winchelsea the road turned off to follow the coast road, as the time crept past 7.30.  With two miles to go, I saw a sign to strike terror into the heart of a knackered cyclist – 25%!  But I gritted my teeth, got up it without getting off, and soon arrived at the Caravan Club site at Fairlight Woods. 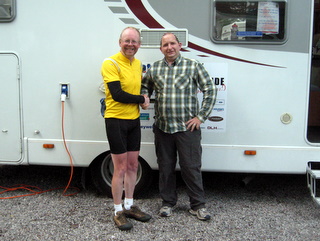 The day wasn’t over – just after I had got back (around 7.45) and quaffed my customary pinta whole milk, another Tweep arrived in the form of @Luggermatt (pictured) – a lovely bloke who’d come specially to see me (well, also on his way to the pub, but I promised I wouldn’t mention that).  Then a couple of caravanners knocked on the door – he’d recently had a brain haemorrhage and was making a firm recovery – his wife was very supportive:  all the time there are stories of people overcoming adversities like this, which is very inspiring.
What a day!  And yet funnily enough I felt great – I’ve no idea why – but all the support I’d been getting, from help with the police, to messages with details of bike repair shops – the one thing I didn’t feel was alone. Thanks to everybody out there who is being so supportive: it really does make a big difference to morale – keep it up, please.
And whilst you’re at it, if you haven’t already donated, would you like to make a contribution to Cancer Research UK via the links on this blog? I’d appreciate that too!
Two blogs tomorrow with a bit of luck, and I’ll be caught up again.  Shorter days too – 46 miles to Brighton and then 31 to Bognor, where we’ll have another changeover of crew and I’ll see my wife Val for the first time in five weeks!
Posted by Bill Honeywell at 21:54